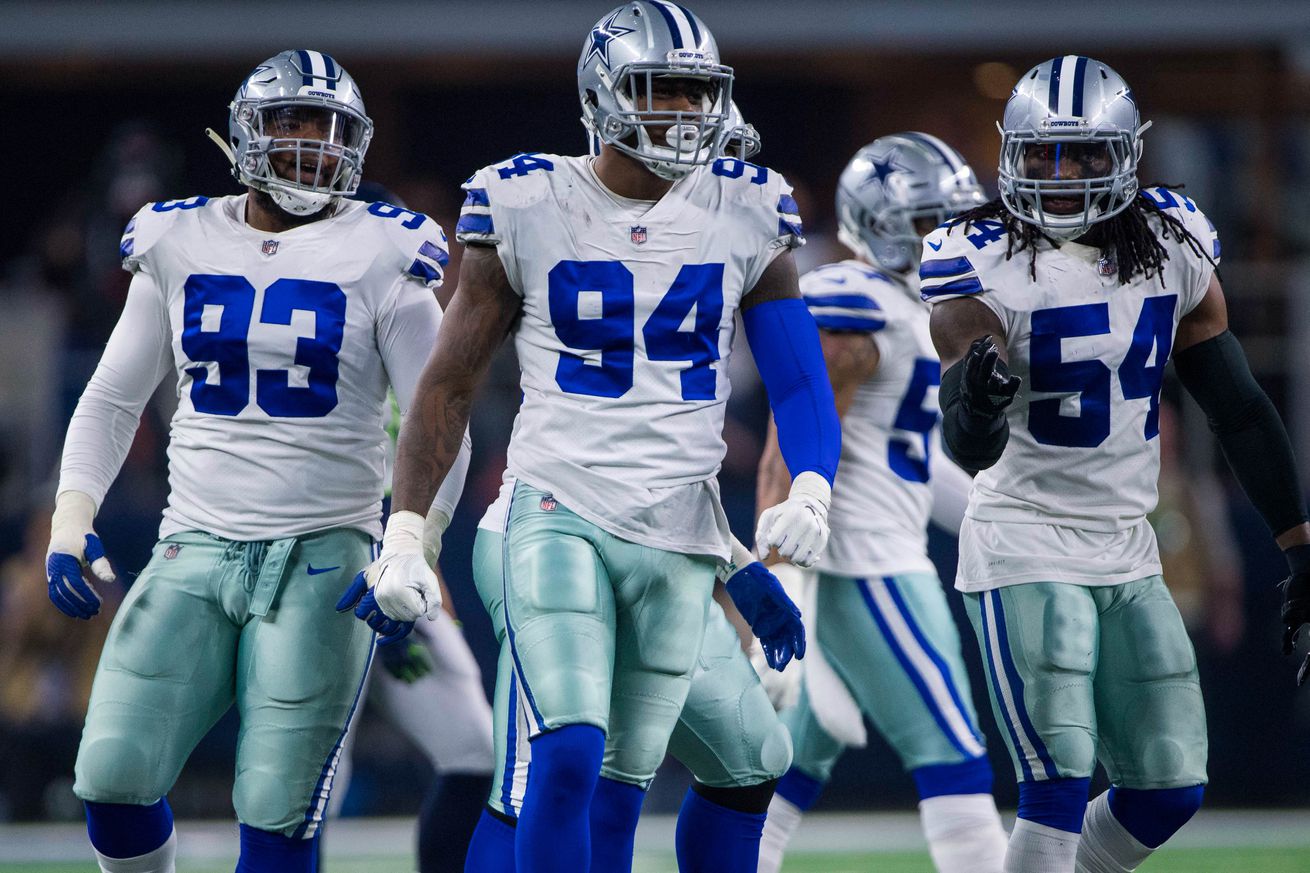 We turn to a metric called Approximate Value to rank the 2018 Cowboys roster from top to bottom.

Over the years, we’ve frequently used a metric called Approximate Value, a metric courtesy of Pro-Football-Reference.com, here on Blogging The Boys. If you’re a regular reader, you’re probably familiar with the metric, if not, or if you’re new to our little corner of the interwebs, consider this post your introduction.

Approximate Value (AV) and the closely related Career Approximate Value (CAV) is something we’ve repeatedly used in the past, particularly during draft coverage. And as we get into the swing of all things draft related over the coming weeks and months, we’ll probably use it once again. So in order to get everybody on the same page, we’ll use this post as a detailed introduction to AV.

”Approximate Value” was originally developed by Doug Drinen at Pro-Football-Reference.com and is designed to assign a specific value to any player at any position for any given year. Mike Kania and the PFR staff updated the numbers with the 2018 data earlier this week and made them available to anybody for free so if you’re into these sorts of metrics, you may want to give a shoutout to Mike and/or the PFR staff on Twitter.

The algorithm behind AV weights position specific metrics (i.e. yards or points scored/allowed) with an indicator for durability (total games played and seasons as their team’s primary starter) and quality (Pro Bowl and All Pro nominations) and then normalizes all this at a team level.

There are many ways to use the AV or CarAV metric, and today we’ll use it to take a high-level view of the 2018 Cowboys roster. But before diving into the numbers, some more explanation from PFR:

”Essentially, AV is a substitute for — and a significant improvement upon, in my opinion — metrics like ‘number of seasons as a starter’ or ‘number of times making the Pro Bowl’ or the like. You should think of it as being essentially like those two metrics, but with interpolation in between.”

”AV is not meant to be a be-all end-all metric. Football stat lines just do not come close to capturing all the contributions of a player the way they do in baseball and basketball. If one player is a 16 and another is a 14, we can’t be very confident that the 16AV player actually had a better season than the 14AV player. But I am pretty confident that the collection of all players with 16AV played better, as an entire group, than the collection of all players with 14AV.”

The AV number starts at 0 and has gone as high as 26 only once in the Super Bowl era: In 2006 Ladanian Tomlinson reached that mark when he set the NFL record for rushing TDs (28) and also topped the league with 1,815 rushing yards.

Topping this year’s list is Patrick Mahomes with 22 points, followed by Jared Goff, Tyreek Hill, Darius Leonard, and Mitchell Schwartz, all with 18 points. AV points are fluid from one year to the next, but a rough scale for this year would look something like this:

Six points or more are an indication of starter quality. But there are only 464 players in the league with an AV of six or more, an average of only about 15 players per NFL team. And that’s an important take-away here: No team in the league has starter quality at every position, especially not in the salary cap era. Keep that in mind as we review the Cowboys roster below, sorted in descending order from 14 points to zero.

The AV metric is heavily weighted toward rate or volume stats like passing yards or rushing yards, so it’s no surprise to see Elliott and Prescott top out the list for the Cowboys. The remaining players on this six-name list are all Pro Bowlers, and their post-season honors put them one notch above all other players.

If not for the fact that the universe is cruel and unjust, Jaylon Smith would have made the Pro Bowl and would be ranked higher here. As a Pro Bowler, Tyron Smith should have been up there with Zack Martin, but missing three games probably pushed him down.

Cooper ends up with eight points for the entire season. I can’t break down the AV number for his six games in Oakland and his nine games in Dallas. But considering that his production for both teams differed significantly (OAK: 47 yards/game, 1 TD; DAL: 81 yards/game, 6 TDs), its safe to assume that his performance in Dallas warrants a higher AV total.

Prorating his performance in Dallas over 16 games gives Cooper 1,289 yards and 10 TDs. The Colts finished with the season with the same 10-6 record the Cowboys had, Colts WR T.Y. Hilton had 1,270 receiving yards, just six TDs, and wasn’t voted to the Pro Bowl either. And Hilton had 11 AV points, so that’s probably what Cooper would have gotten for a full season in Dallas as well. And that would make him a Top 10 receiver in the league.

7 Points – To the Trenches!

Finally a metric that shows some love for the Cowboys defensive tackles! The AV metric likes what the Cowboys DTs did overall, and it awards Crawford and Woods for getting 15 starts each.

Here’s what the AV metric sees: both Crawford and Woods made their share of plays, even if plays by the defensive ends were often more spectacular, and the Cowboys ranked fifth overall in run defense.

On the other side of the line, Joey Looney gets some well-deserved recognition, as does La’el Collins.

Williams and Collins are ranked lower than the other O-line players or defensive tackles, but that simply reflects their availability. Williams started just 10 games, Collins nine.

Awuzie and Woods were part of a secondary that allowed a defensive passer rating of 95.7, which ranked 22nd in the league. And while they both notched the prerequisite number of starts, they didn’t get any post-season honors and also didn’t show up much on the stat sheet with sacks or interceptions.

Beasley is ranked where he is because of his modest production (672 receiving yards) and lack of starts – he had just four starts despite playing in all 16 games.

Anthony Brown is ranked lower than his fellow defensive backs, but that’s due to his comparatively lower number of starts.

The remaining players here all owe most of their points to AV’s inability to differentiate much between players in the same position group. Taco Charlton owes every single one of his points to that weakness in the algorithm.

Lee missed seven games entirely and only started in five. But calling him a borderline starter isn’t doing him any justice, so he gets his own category.

If you’ve come this far despite feeling uneasy about this whole AV Thing, this might be the point where you lose it. How can Blake Jarwin, he of the three-TD, 119-yard game against the Giants, be ranked as a “situational player” just one spot above the “marginal contributors? And didn’t Stephen Jones just say Jarwin was the TE with the highest upside?

And what’s all this silliness about Randy Gregory being a situational player?

Well, AV is about production, not potential. And in 2018, Jarwin and Gregory only saw action in limited, and specialized roles. Gregory played 457 snaps mostly as a situational pass rusher, and Jarwin played 387 snaps as a blocking tight end for the most part and only emerged as a receiving option late in the season.

Lack of starts and lack of stats puts both players in this 3-point bracket, but their future looks bright.

Also, three points for the kicker.

These are all players who received limited playing time for different reasons (plus the punter).

This is a bit of a tricky group. In principle, these are players who saw limited playing time, but for different reasons. Some of them are special teams aces, some were limited by injuries, some simply didn’t put up a lot of production, some of them simply are career backups.

The question here is all about trajectories. Which of these players are pointing up and which are pointing down (some have already been released).

This list contains all players who were active on the game-day roster at least once in 2015 (and are not on IR and haven’t been cut) but did not record any significant stats or playing time.

Before anybody starts hyperventilating about who the AV metric is calling a scrub, keep in mind that this is a measure of the performance in 2018, and most of these players did not accumulate any significant playing time as you can see by the snap count (offense or defense, special teams) behind each name.

Of course, this is just one of many ways to look at the roster. But it does provide an alternative angle from which to evaluate the 2018 performance.