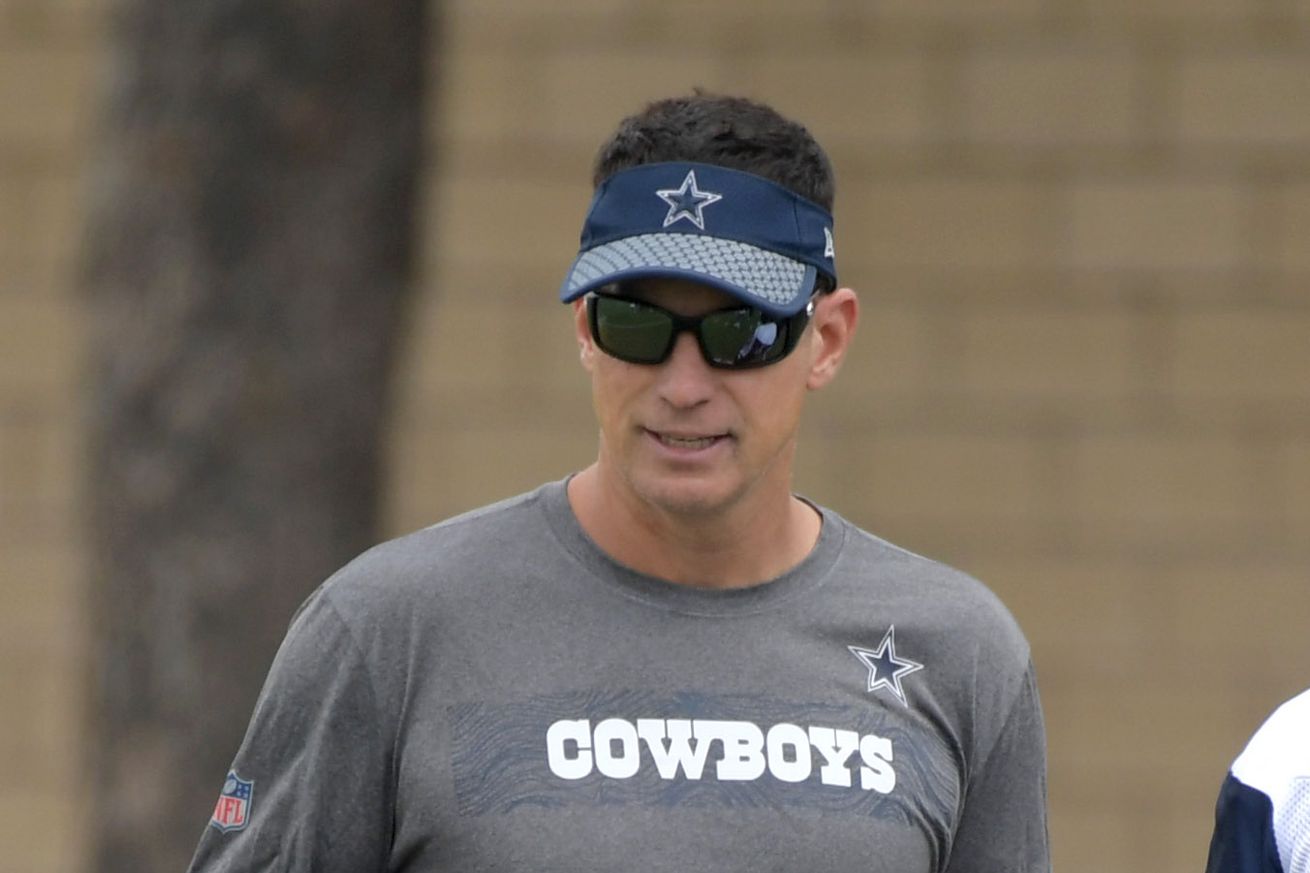 Any guesses on who the Cowboys will hire for their offensive coordinator?

The marriage between the Dallas Cowboys and Scott Linehan was officially terminated on Friday as he and the team had agreed to mutually part ways after five years together. Linehan joined the team in 2014 and helped the offense right out of the gate. The Cowboys offense finished top five in points scored and made it to the divisional round of the playoffs in his first year as OC. During his five years with the team, the Cowboys have made it to the divisional round three times and the offense had a top five finish in two of those seasons (2014 and 2016).

But it’s a recent trend that has people concerned about the offense. In three of the last four years, the offense has finished 14th or worse in points scored, including finishing second to last in 2015 after Tony Romo went down to injury. While extenuating circumstances might have given Linehan a mulligan at times, it was hard to explain why an offense equipped with plenty of talent finished 22nd in the league in points scored this season. Whatever the reason, Linehan was just not getting enough out of his resources. It was time to move on.

And that is exactly what this Cowboys team is doing, but now the question is – who’s going to replace him. Names are being passed out like raffle tickets, but there are three coaches who appear to have the inside track on landing the play-calling responsibilities in Dallas.

I think the #Cowboys have narrowed it down to the final four candidates – see my timeline. At this moment most anything beyond that is just people guessing. https://t.co/33QTZ8hs57

The Cowboys hired Doug Nussmeier to be their tight end coach this season and that turned out to be a great decision. Despite the retirement of Jason Witten, the Cowboys were able to get solid contribution from their tight-end-by-committee. No one came close to Witten’s 63 catch, 560 yards from a year ago, but the 2018 group put up a combined 68 catches for 710 yards this year. Nuss took a very raw group of players and was instrumental in helping them develop over the course of the year. The improvement of these guys by season’s end was very evident.

While the productivity of the tight ends Improved over the year, Nussmeier may be able to extend that production across the entire offense. In 2012, he was hired to be Alabama’s offense offensive coordinator, helping them win a National Championship and putting up 42 points in the title game against Notre Dame. If there is anyone who knows how to get a player like Amari Cooper involved, it would be Cooper’s offensive play-caller at Alabama.

I’d get ready for Doug Nussmeier. A lot of experience with QBs and as an OC in the college game. https://t.co/LIo7sNvsRp

Nuss checks off all the boxes – he’s a proven OC in college, he’s has history with the team, and he’s already well respected as a good coach on the team. Sign me up.

Poaching from another NFL team

If the Cowboys don’t want to promote their own tight end coach, they could consider a tight end coach from another team. Dan Campbell has been coaching tight ends in New Orleans for the last three years. Campbell, a former tight end for the Cowboys from 2003 to 2005, has been exposed to some great coaches as he’s played under Bill Parcells and Sean Payton. Campbell was with the Miami Dolphins from 2010-2015 and was even chosen to be their interim coach after Joe Philbin was fired after a 1-3 start. Under Campbell, the Dolphins finished the season with a 5-7 record. Miami passed on Campbell as their new head coach and went with Adam Gase instead. Gase was just fired after three seasons in Miami.

Meanwhile in New Orleans, the Saints offense has seen a resurgence over the last three seasons. They’ve always been good under Payton, but they slid a bit and without their offensive explosiveness, the Saints had three straight 7-9 seasons. But now they’ve re-established themselves and are back in the top five in points scored over the last three seasons. Campbell’s just one piece of a very effective offensive coaching staff, but he’s a hot commodity right now. He’s had head coaching interviews with Cleveland, Green Bay, and Arizona.

Campbell’s traits may be very appealing as a potential head coach candidate, but he doesn’t have any experience calling plays. Adding a head-strong motivator isn’t what the team is lacking in the offensive department. Some new ideas and the vision to turn this talent into a more effective unit, is.

Bringing in a college coach

Another guy with past connections is the recently hired offensive coordinator at Georgia, James Coley. In 2005, he worked under Nick Saban’s Dolphins team as an offensive assistant – the same time Jason Garrett and Linehan were there. He’s been with Georgia the last few seasons, but he helped the Miami Hurricane offense put up some impressive stats. They finished second in the ACC in yards per play at 6.75 in 2013 and 6.68 in 2014. They averaged over 33 points a game in 2013.

Would Coley be the fresh look the Cowboys need? In Georgia, they were a run-heavy offense with 63% of their plays being running plays. The Cowboys are run-first team, but would this just be more of the same or could Coley help ignite the team’s passing attack?

Coley might fit the mold in Dallas, but last time we checked – we wanted a different mold, right? He doesn’t appear to be a candidate that would fill the room with optimism if you’re looking for a big change.

Apparently there is a fourth candidate, but no one is sure who that person is. Of course, that doesn’t keep people from speculating and a familiar name keeps coming up.

Interesting suggestion from @ktfuntweets to @BenRogers and @SkinWade that maybe Kellen Moore could get a look at OC.

Career backup retires to coach quarterbacks for a brief time and is then named offensive coordinator of the Cowboys.