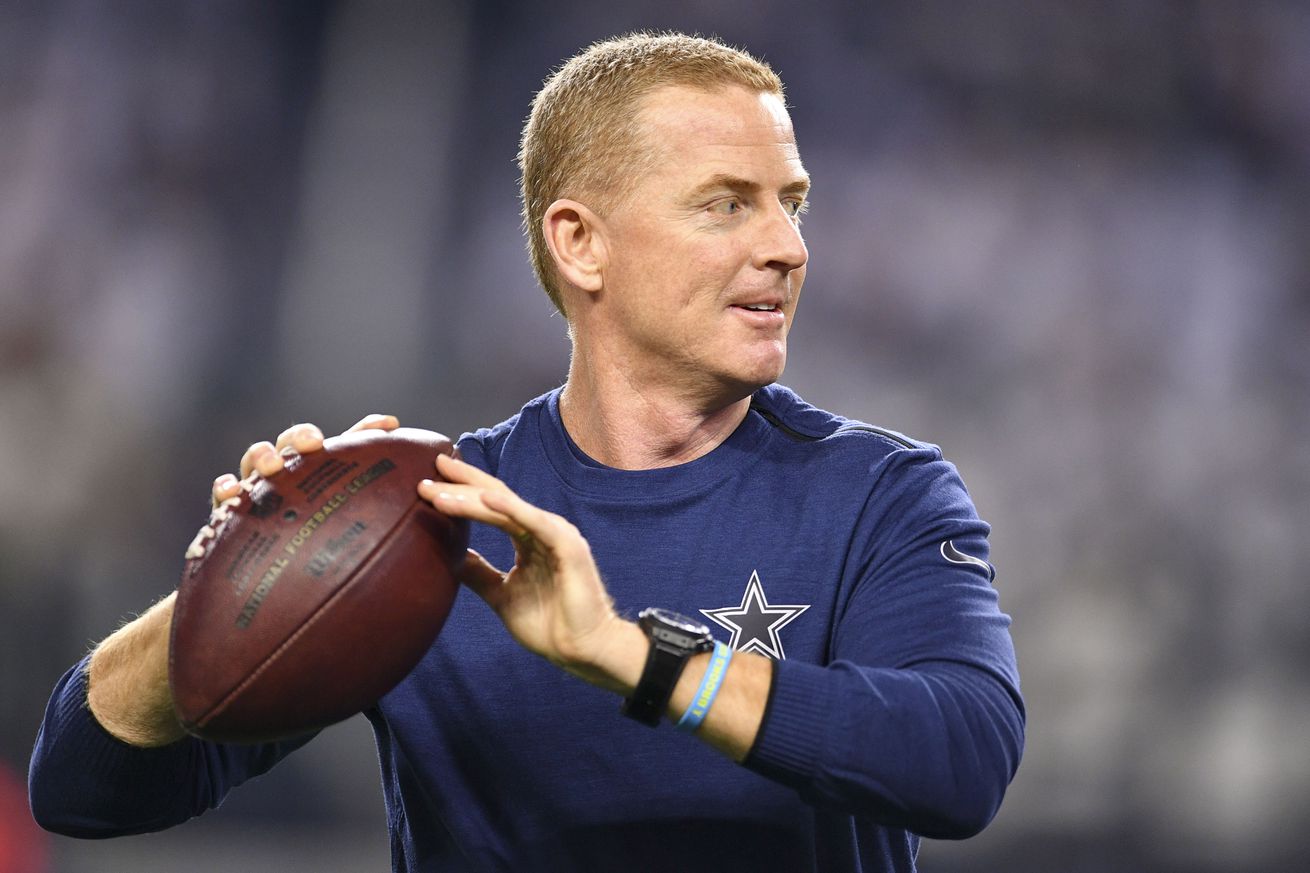 It’s been six years since Garrett called plays, but don’t forget how good he was at it.

Sunday was supposed to just be a day for football fans to watch the four best offenses in the NFL compete for the chance to go to the Super Bowl, but instead the Cowboys dominated headlines with their coaching changes. After hiring Jon Kitna as their new quarterbacks coach, and with Kellen Moore appearing likely to be promoted to offensive coordinator, news has also broken that Jason Garrett will probably be calling plays in 2019.

Even with the changes, Cowboys sources believe Jason Garrett will be more involved in the offense and play-calling, a role he once gave up, especially with the addition of Scott Linehan, who is now gone. https://t.co/ZvrMbkTD88

This seems to fall in line somewhat with the trend most NFL teams have fallen into lately in looking for a great offensive mind who can call plays as a head coach. In the 2018 season, there were 11 head coaches who called offensive plays. And of the 12 teams that made the playoffs this year, seven featured head coaches who called offensive plays: Doug Pederson, Andy Reid, Matt Nagy, Bill O’Brien, Frank Reich, Sean Payton, and Sean McVay, who have a combined 430-273 career record and two Super Bowl victories.

Of course, this search for an offensive play-calling head coach really started with McVay, who made it “cool” to do that. Before then, it was a commonly looked-down-upon practice in the NFL, with Payton and Reid being the notable exceptions. This sentiment was partly what led to Garrett relinquishing his play-calling duties prior to the 2013 season. First, it was Bill Callahan who called plays, and then Scott Linehan was bought in for the 2014 season in what infamously caused drama with Callahan.

It’s easy to forget in all that just how good Garrett’s command of the offense was. In many ways, he was the “next Sean McVay” before there was even a first Sean McVay. Garrett was a career backup who won two Super Bowls with the 90’s Cowboys; as a graduate of Princeton, he was well regarded for his high football IQ. When Garrett retired after spending the 2004 season with the Miami Dolphins, he was immediately made the quarterbacks coach for the Miami Dolphins.

He only spent two years there before he was hired to be the offensive coordinator in Dallas under Wade Phillips, and after just his first season running the offense, Garrett was getting head coaching interest from other teams. The Cowboys wanted to keep him so badly that they named him the assistant head coach. Garrett continued to get interviews for other jobs the next two years, but stuck with his former team.

And a lot of that head coaching interest came from how great his offenses were. In 2007, the Cowboys ranked third in total yards and second in scoring. The next year, the offense regressed to 13th in total yards and 18th in scoring, but Garrett’s unit rebounded in 2009 with the second most total yards in the entire league; this included the seventh best rushing attack in the NFL, which provided a much-needed balance to an offense that had been criticized as too pass-happy in 2008. Garrett’s offense then put up 34 points on the Eagles to get the franchise’s first playoff win since 1996 before being shut down by the Brett Favre Vikings.

The 2010 season was obviously a terrible one, as Phillips was fired during the year after a 1-7 start, but the offense’s high level of production even without Tony Romo speaks to the quality of Garrett as a play-caller. The offense ranked seventh in the NFL in total yards and scoring offense, and despite only having Romo for five and a half games, the Cowboys had the sixth-best passing offense that year. By the way, the quarterback that took over after Romo went down? New quarterbacks coach Jon Kitna.

Once Garrett was given the full-time head coaching job, the entire team began a rebuilding phase that most notably started with the offensive line. Still, the Cowboys ranked 11th in yards and 15th in scoring in 2011, and in 2012 they had the sixth-ranked offense and the 15th scoring offense while boasting the third-best passing attack.

But consecutive 8-8 finishes led to Garrett handing over play-calling duties to focus more on things like game management and bigger picture things. Back then, that was the head coach model most NFL teams sought. Now, it’s changed to feature a head coach who specializes in the offense, a defensive coordinator who has full control over the defense, and an assistant coach who helps out the head coach with things like clock management. For example, when McVay became the Rams head coach in 2017, he hired Jedd Fisch to be his “clock management specialist.”

Garrett now finds himself in a similar situation, where Rod Marinelli and Kris Richard pretty much have total control over this defense, allowing Garrett to focus more on the offense. It’s unclear yet if there will be any coaches given more responsibility with regards to clock management, but this staff is shaping up to look more like the modern staffs of the NFL. And Garrett’s involvement can only mean good things. Don’t forget that Garrett’s influence in weekly game planning expanded near the end of the year:

From what I’ve been told, Scott Linehan had seen his role in the offensive gameplan significantly reduced over the final weeks of the season, despite still calling plays.

This included greater input from Jason Garrett, Doug Nussmeier, and even Dak Prescott.

Although it’s not been explicitly stated when Garrett became more involved in the offense, one can guess it happened after the Cowboys were shut out by the Colts. Since then, the Cowboys averaged 27 points per game (prior to that they were averaging 21 a game). This four-game stretch also included some of Prescott’s best games of the year, as he completed 66.4% of his passes for 1,040 yards, throwing seven touchdowns and only one interception, which came in the Seattle game where KJ Wright infamously got away with pass interference before snagging the pick. Also during this four-game stretch, Prescott only took seven total sacks (he was averaging four sacks a game before that) and had 7.76 yards per attempt with a 102.5 passer rating.

Perhaps the most important trend during those four games was the fact that Prescott scored three rushing touchdowns and had zero fumbles. Up until that point, Prescott had only five rushing touchdowns and 12 fumbles. If in fact those four games were when Garrett became more involved, that should bode well for his ability to better utilize Dak’s talents, specifically his threat as a runner.

So while it may not be the fresh face many fans were clamoring for, Garrett has a history of being an exceptional play-caller, and the more involved he gets with this offense, the better the overall unit should become.