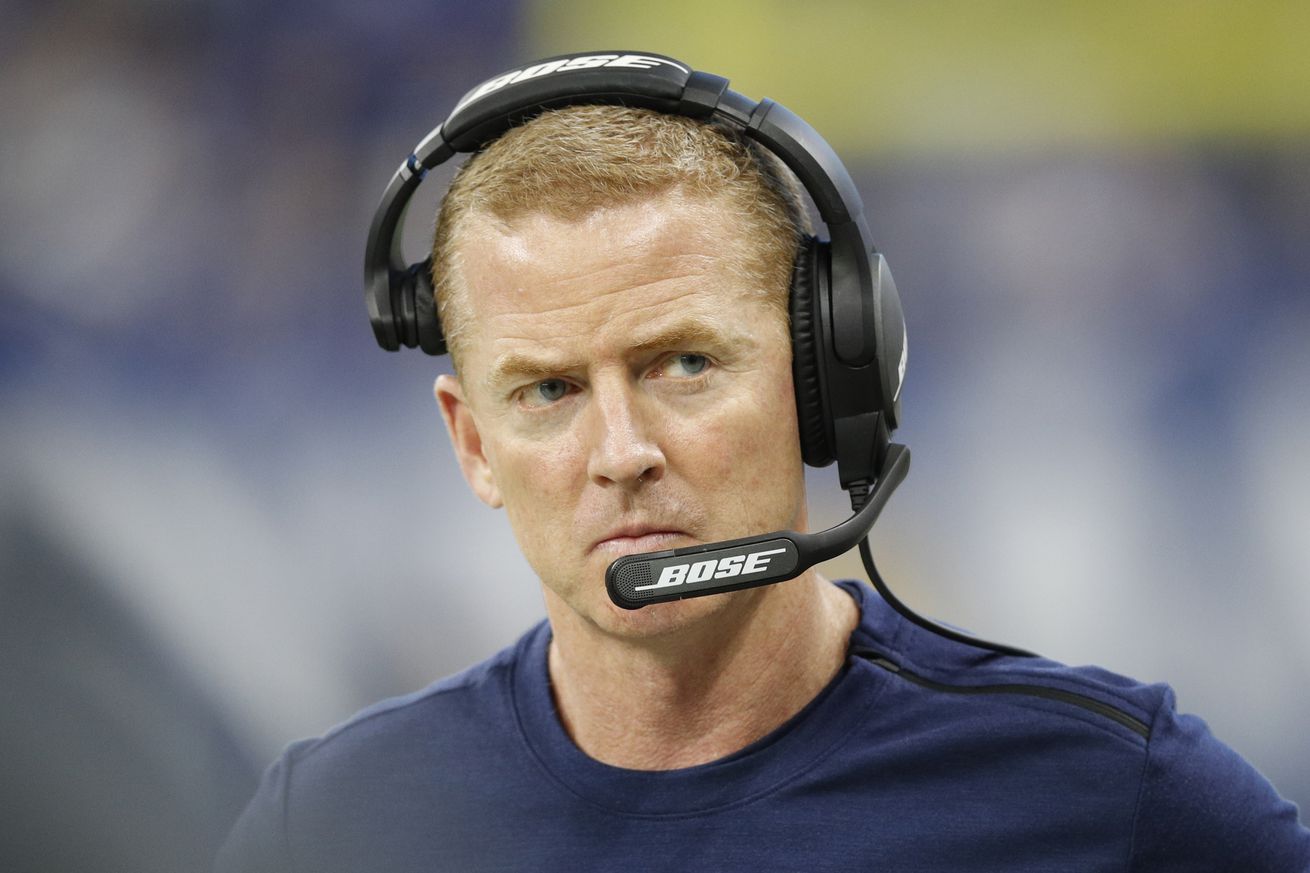 Jason Garrett is still around and we should be happy about it.

It brings me great pleasure to share with you my 1,000th article over here at Blogging The Boys. And what better way to celebrate it than to talk about my favorite person within the Dallas Cowboys organization – Jason Garrett. Sure, he’s not everyone’s favorite and for some people – he’s at the bottom of your list, but hey – that’s what makes us all unique.

When the Cowboys were 3-5 at the midway point this season, Jason Garrett’s approval rating was at an all-time low. The hot seat was pretty toasty at that time if you were listening to the scuttlebutt all across Cowboys Nation. Of course, Jerry Jones never wavered on his faith in his head coach and he had to feel pretty darn good when the Cowboys went on a run to finish the season. Another NFC East title was great, but then another divisional playoff loss was not so great and here we are again wondering what to expect next.

Garrett will be sticking around, but his former offensive coordinator Scott Linehan is not. And after many fans were hoping for less Garrett, it’s possible we could be seeing even more Garrett should he take on the play-calling responsibilities. How does that make you feel? Here are three reasons you should feel pretty good about what’s coming down the pike for the Cowboys.

Reason #1 – The rebuild is almost complete

Jason Garrett isn’t just a coach. He’s a team-builder. You hear all this talk about his “process” and how he is “building a team the right way,” but it’s a legit blueprint. He’s doing what he set out to do. Year after year, Garrett has remodeled each position group. It started out with a complete overhaul of an aging offensive line. After never taking an offensive lineman in the first-round of the draft since owning the team, Jones’ Cowboys took Tyron Smith during Garrett’s first year as head coach. They selected two more first-round lineman over the next three years in the draft. All three are All-Pro’s. Then came the defensive line overhaul, then secondary, and last year it was the pass catchers as both the wide receivers and tight end position groups were completely blown up.

It’s frustrating to always listen to him talk about him improving the roster, but at least he’s kept the team competitive while he’s done it. He’s only had one losing season as a head coach and it came during a season where the team had no competent quarterback option after Tony Romo got hurt. Besides that 2015 season, the team has battled for playoff contention in every year. Not only have they won the NFC East in three of the last five seasons, but Garrett’s done it with three different teams. Only two players have started all three divisional playoff games.

Part of building the team the right way is that success can be repeated. The days of taking shortcuts are over. Dallas builds through the draft and they now have plenty of money to pay their top performers. That hasn’t always been the case.

While the Cowboys haven’t been able to win the big prize, each new season brings about new hope because the team continues to trend in the right direction. Are you excited about next season? Of course you are. Other teams have flashed some great seasons, but they’ve had trouble sustaining their success.

Since Jason Garrett became the head coach, the following NFC teams have made the Super Bowl:

Of those teams, only Seattle has more wins than Dallas during that span. Postseason success is an issue, but winning in general, is not.

The New York Giants have had five losing seasons over the last six years. In 2016, they were praised for all that free agent spending and it was good enough for a wild card playoff appearance, but have since only won 25% of their games over the last two years. Some of their high-priced free agents aren’t even on the team anymore.

The Philadelphia Eagles were also applauded for great front-office maneuvers. They won their first Super Bowl in franchise history last season. They tried to keep their success going by trading away a draft pick to get Golden Tate, but that turned out to be a costly rental. The Eagles are in the worst financial position of anyone in the league as they are $16 million over the cap. They’re going to have even more cost-cutting moves this offseason which will weaken their roster. And who knows what’s going on with their quarterback situation? Just a year ago, they were on top of the world. Now, they’re at a crossroad.

The San Francisco 49ers looked like the next best thing under Jim Harbaugh, but they have missed the playoffs the last five seasons and gone through four different coaches. They’ve have five different quarterbacks lead their team in passing since 2011 dating back to when Alex Smith was still behind center.

Winning games in the postseason is still what ails this Cowboys team, but let’s not pretend this isn’t a winning football team right now.

Garrett is known for being a great motivator of his players. Nobody denies that. This team plays with a lot of fight. The issue comes when the Cowboys get out-coached with the X’s and O’s. After being one of the top offensive teams in the league not too long ago, the offense has slid considerably. They’ve have the leading rusher in three of the last five seasons, including Ezekiel Elliott in 2016 and 2018, but the passing game has diminished. Linehan is gone and the Cowboys are in search of a new play-caller, but it could be a familiar coach who might be the de facto offensive coordinator going forward. Reports are that Garrett could be in line to call plays for this offense.

Fans may grimace over the idea that the hopes of sprucing up the passing game falls on Garrett, but they shouldn’t. He’s had success doing just that. Check out the team’s passing stats over the last 12 seasons (the top 10 finishes are highlighted in green):

I included the team’s leading passer in there to show that success in the air isn’t just Romo dependent. In fact, the common denominator for finishing in the top 10 in passing isn’t Romo at quarterback, but rather Garrett as the play-caller.

Garrett handed over play-calling responsibilities in 2013 to Bill Callahan after it was believed freeing Garrett up would have a better overall effect on the success of the team. That wasn’t the answer as the team again finished 8-8 and the passing offense declined considerably. Callahan was replaced with Linehan and the team went on to make the playoffs three times, but the passing offense kept getting worse. Part of this was the emergence of a strong rushing attack, but the team lost it’s way to help move the ball through the air.

The team is taking steps to help improve in that department. Adding Amari Cooper certainly will help. Drafting Michael Gallup should pay dividends as well. But giving Garrett more play-calling duties may also be the winning ticket in helping get the passing game back on track. Regardless of who is named the new offensive coordinator, look for Garrett to take more control of the offense. He’s built the team his way, he’s got them all playing with a relentless spirit, and now it’s time for them to run his offense.

This team is truly becoming Jason Garrett’s team and it won’t be much longer before we all realize that’s a very good thing.