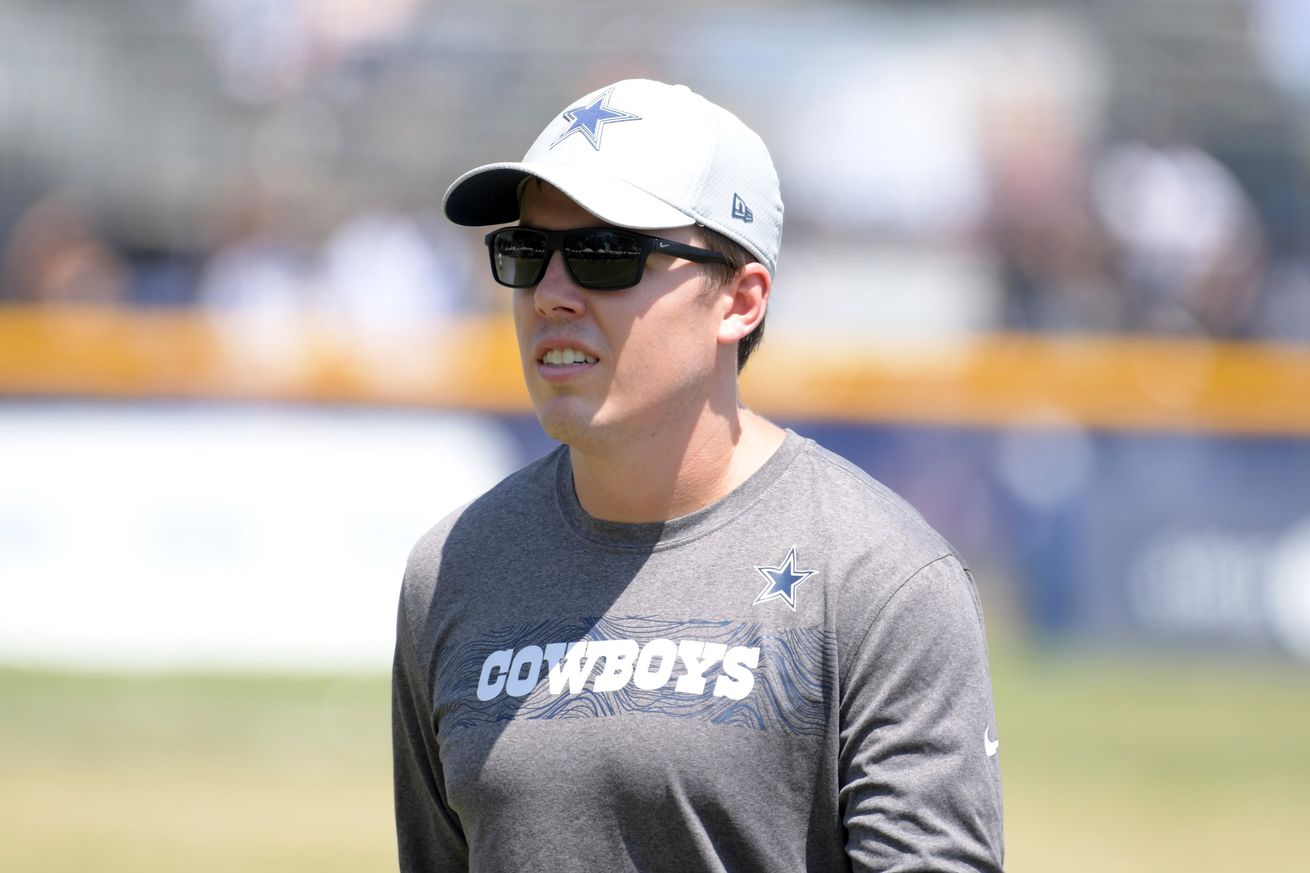 The Cowboys aren’t ready to confirm or deny but Kellen Moore is installing the offense at the Pro Bowl, is that a big enough sign?

Cowboys mum on roles for assistant coaches, Kellen Moore letting it play out – Nick Eatman, Dallas Cowboys
Moore isn’t worried about what role he’s going to have on the coaching staff, he’s just letting everything play out.

Moore has been rumored to be a leading candidate for the vacant offensive coordinator position or perhaps the passing game coordinator.

And since the team has also brought down Jon Kitna to Orlando in what has been reported to be the next QB coach, it would make sense Moore is getting some kind of promotion on the staff.

“Yeah, we’ll see how it plays out. Yeah, obviously I love it down (in Dallas),” Moore said. “It’s a good group. We’re heading in the right direction. We have to keep building on it. “

Kellen Moore is running offense at Pro Bowl – Clarence Hill, Fort Worth Star-Telegram
Moore is installing the offense for the NFC at the Pro Bowl, it’s a pretty good indicator that he’ll be taking a bigger role in 2019 with the Cowboys.

Stephen Jones said the No. 1 priority in the next offensive coordinator is to have somebody who’s going to bring out the best in Prescott.

No one on the staff has spent more time with Prescott than Moore, considering they were backup quarterbacks together to start the 2016 season before he got injured and Prescott replaced an injured Tony Romo to fashion the finest rookie season of any quarterback in NFL history. Moore also served as one of Prescott’s backups in 2017 and was his quarterbacks coach in 2018.

There’s nothing that says Cowboys’ Kellen Moore is too young to be a valuable coordinator – Tim Cowlishaw, SportsDay
Moore’s NFL career may have never blossomed but that doesn’t mean he’s a bad candidate to be the Cowboys offensive coordinator.

Cowlishaw: I don’t think any regression from Dak this season had much to do with Kellen’s tutelage. In the Cowboys’ system, Linehan was the driving force in the offense and the play-caller. Now I have questioned whether Moore has the experience that Dak needs, so this change would address that. Kitna can be a better sounding board because he experienced it all as an NFL quarterback. And there’s nothing that says Moore is too young to be a valuable coordinator. He’s unproven, to be sure. He’s also the same age Sean McVay was the day the Rams hired him as a head coach. No one hailed the Rams for their brilliance that day. So I don’t put much stock in “too young” or “too old” when it comes to coaches.

QB Dak Prescott backs Kellen Moore as OC – Clarence Hill, Fort Worth Star-Telegram
Prescott didn’t divulge any confirmations but he did tell the media that he believes Moore can be a great offensive coordinator.

“You look at Kellen people say he can’t do this or can’t do that,” Prescott said. “He is the winningest quarterback in college football history. He made a career for himself in the NFL for a long time because of how he knows the game, how quick he is in processing the information, seeing defenses, learning what is happening offensively and defensively. He has got the mind for it.”

Report: Dak Prescott has not been asked for his opinion on potential offensive coordinator by Cowboys – RJ Ochoa, Blogging The Boys
The Cowboys reportedly have not consulted with the quarterback on the big coaching question remaining.

“I’m not sure what’s going to happen going forward. I haven’t sat down and talked with Jerry and the guys I guess that may care for my opinion or whatever. But I’m excited about what we’re going to do moving forward.”

What Does Jon Kitna Bring To This Staff?- David Helman, Dallas Cowboys
Kitna used to back up Tony Romo but now he’ll be brought in to coach Dak Prescott.

These aren’t difficult dots to connect. Kitna returns to Dallas, where he spent several years as a player, after a 14-year career as an NFL quarterback. As a member of this coaching staff, he’ll have direct contact with a 25-year-old quarterback who figures to be the face of this franchise for quite some time.

“I would say the No. 1 priority is to have somebody who’s going to be bringing the best out of Dak,” said Cowboys COO Stephen Jones on Tuesday. “Utilize his skills the best, be able to do things that help us improve on the offensive side of the ball.”

Cowboys offense can evolve without total overhaul of schematic philosophy – Michael Sisemore, Blogging The Boys
Don’t expect a brand new offense, but you can expect a little evolution within the same philosophy.

If you approved the Cowboys keeping Jason Garrett in charge, you have to understand that a complete renovation and scheme change was never in the cards. Changes in concepts? Sure. A few more wrinkles and different opinions on how to implement them is certain to happen, but it’s naive to think an overhaul was imminent, that may come eventually but not yet.

No two coaches interpretations of fundamentals are alike so we’re certain to see several differences. If you can think back to Garrett’s days as the play-caller, his offense wasn’t a carbon-copy of Linehan’s. For one, finding tight end mismatches were much more prevalent in Garrett’s offense than his former mentors.

Kris Richard to remain on Cowboys’ coaching staff; If offered a head coaching job, ‘there’s no guarantee I would’ve left’ – Jon Machota, SportsDay
The Cowboys defensive backs coach Kris Richard says that Dallas is where he wants to be despite interviews for vacant head coaching positions.

“This is a first-class organization,” Richard said following the NFC’s Pro Bowl practice at the ESPN Wide World of Sports Complex. “If I would’ve been chosen, there’s no guarantee that I would’ve left. I gave [the Jones family] my word that whatever decision was going to be made I would come back to the table and talk to them.”

It is unknown whether he will have the same job title and salary this season. Defensive coordinator Rod Marinelli allowed Richard to do much of the play-calling this season when the Cowboys ranked sixth in points allowed and seventh in yards allowed.

But Marinelli, 69, was adamant after the Cowboys’ loss to the Rams in the divisional round that he is not retiring.

“He’s like one of the top three men in the world as far as I’m concerned,” Richard said of Marinelli. “He has great character. He’s tough. He’s demanding. I just love his attitude. He’s what is right about America. He’s hard. You can’t live soft and be hard. I love him.”

“It’s been kind of a whirlwind,” Vander Esch said. “Now I’m here and this is pretty crazy, but I’m going to enjoy every single bit of it. Got one more game left to go, soak it in, have fun and just enjoy the experience.”