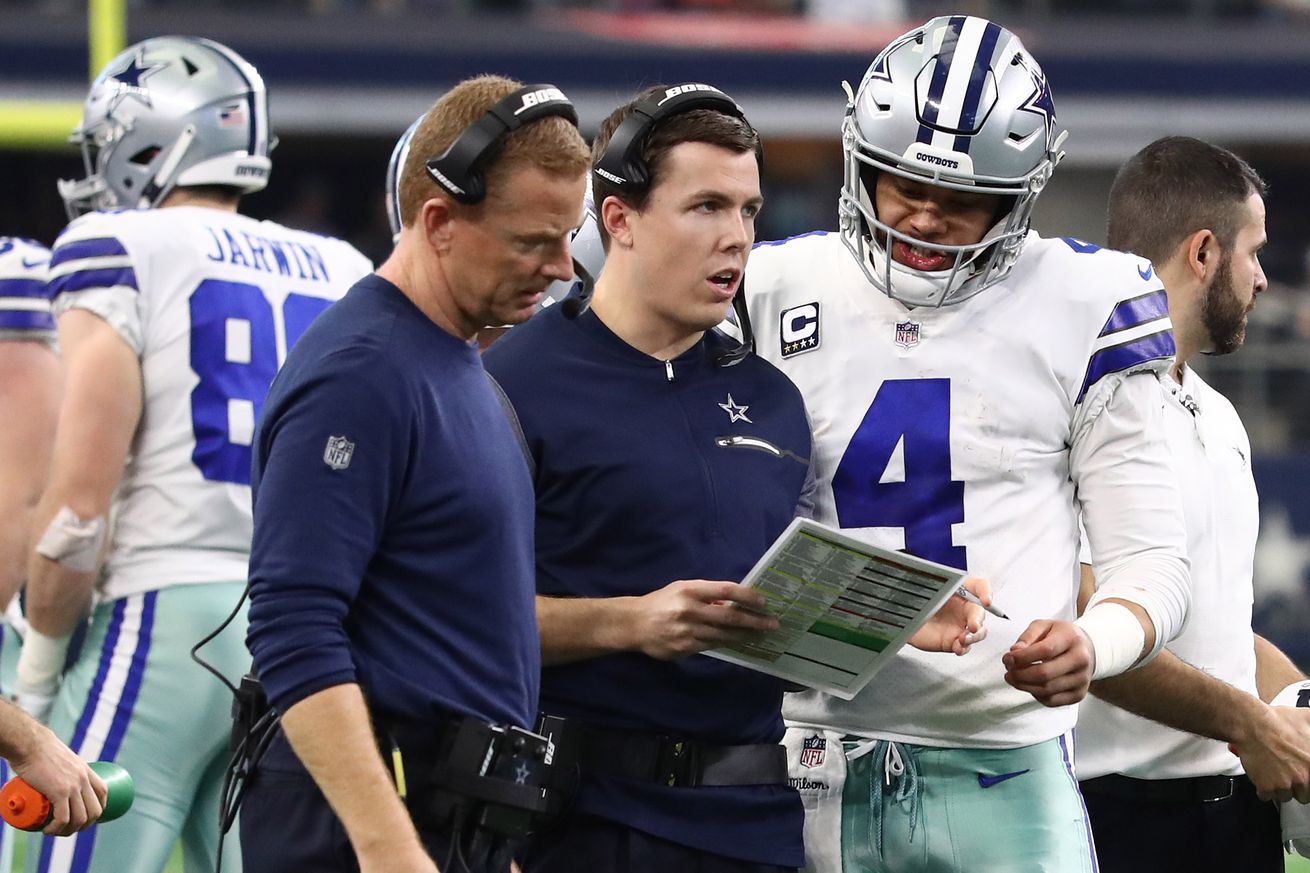 Sometimes, the most important thing is to just find a fresh direction.

It is a bold strategy, Cotton. The Dallas Cowboys have, by all indications, decided to promote Kellen Moore to the offensive coordinator position after amassing an impressive résumé of (checks notes) six seasons in the NFL as a backup quarterback with a whole three games of playing experience, followed by an entire year as a quarterbacks coach, working under the man he is replacing.

If this blows up for Dallas, there aren’t going to be enough fingers in the Metroplex to handle all the resulting pointing.

When the rumors first surfaced that the Cowboys (meaning Jerry Jones, Stephen Jones, and Jason Garrett) were leaning towards replacing Scott Linehan from within, and that the leading candidate was the very young and inexperienced Moore, there was a lot of dismay in social and traditional media. But now that it is creeping slowly toward being a done deal, the mood seems to have changed. While there are still many who expect for this to not work at all, a lot of people, including many who have built some real credibility reporting about this team, are seeing some possible upside. (I am of that opinion myself, while leaving my credibility for you to judge.) Some of that may spring from the intense disfavor Linehan fell into over the past year or so. But there is also a belief that the team was sorely in need of a different approach to the offense, particularly the play calling. In a league where the top four scoring offenses made it to the conference championships, the Cowboys certainly looked out of date and out of step. While Dallas still faces having Garrett in overall charge of the offense (perhaps even more directly involved than he has been the past few seasons), getting some minds involved that may be more open to things like increased pre-snap motion and not bunching up the formation in short yardage situation may be sufficient. That adds Doug Nussmeier and new addition Jon Kitna to the equation, with indications already coming that the OC job is going to have a more collaborative nature.

There is something else that is a cause for optimism, and it goes beyond the world of football. In the world of management and productivity, there is a thing called the Hawthorne effect. It is based on a study done way back in the 1920s and 30s in a factory located in the Hawthorne Works, an electrical manufacturing facility near Chicago. In the study, management told the workers they were going to make changes in the levels of lighting to try and see what would increase productivity, and then record the results. An interesting thing happened. The changes did increase production. All of them. No matter what they were. Use brighter lights, production increased. Turn the lights down, ditto. Even when the lighting was reduced to the bare minimum for the workers to safely do their jobs, they still kept doing more and more.

The theory is that the very act of being observed led the workers to put more effort into what they do. It was the motivation of the workers who responded positively to the scrutiny that really mattered.

The NFL, and the Cowboys in particular, are observed by millions every time a game is played. The local and national media then dissect their performance to the smallest detail. The players themselves are generally highly motivated and very proud individuals with remarkable skills and talent. Now Dallas has undertaken a coaching experiment, if you will, that is being covered extensively and followed by countless fans. Need proof? You are reading this, aren’t you?

So the very fact a change occurred that many have been hoping for and insisting had to happen has set the stage, and that in itself may spur an improved performance. Perhaps significantly improved.

Fortunately, there is some substance to the change as well. Moore has long had a reputation among his teammates, fellow coaches, and many reporters for having an outstanding offensive coaching mind, even long before he left the playing field for the sidelines.

He has even been credited by one of the best of his teammates, All Pro center Travis Frederick, for designing a very successful play long before he became a coach.

“Actually, he had a play named after him, it was his play and it scored several touchdowns. These are things that you know he had an impact on, even at a quarterback’s coach level. So, looking forward if that is the case that he becomes the offensive coordinator, you know that those ideas are going to be given more traction.”

He played at Boise State, where he set the FBS record for wins as a quarterback in their high-powered offense, so he knows some of those college concepts that are also the rage in the NFL today.

And the addition of Kitna reaches even deeper in looking for innovative ideas to add to the mix. Kitna was a successful high school coach, and high school football, particularly in the white-hot environment of Texas where he spent several years, is a true breeding ground for innovation, as David Helman noted in an article on Kitna at DallasCowboy.com.

Success at the high school level isn’t likely to resonate with those who follow the game’s top professional league, but schemes from the younger levels of the game have gradually taken over the NFL in recent years. Jones was sure to point out that Philadelphia Eagles coach Doug Pederson and Chicago Bears coach Matt Nagy got their starts in high school, while Cowboys owner/general manager Jerry Jones mentioned the trickle up effect from high school and college.

“I think that’s a unique way to look at this game, seeing that more and more brought up to the game,” Jerry Jones said. “High school is a very interesting place as to how it is impacting the game at the college and certainly at the pro level.”

So even though Garrett will still be the head coach and have a huge level of input and influence on what the team does, the chance for real and meaningful change is suddenly significant. And Garrett has shown in his career that he can employ an effective, high-scoring passing attack. It was not the path the team took in recent years, and it is certainly a valid argument that Linehan was far too unwilling to change his approach.

The success or failure of this move, which is a unique combination of boldness in going with some very inexperienced and, in Moore’s case especially, young coaches who also represent a conservative facet in being very familiar to the organization will depend a great deal on just how much of the problem Linehan was the past couple of seasons. The idea that he was too reluctant to change from what he did in 2016, when Dak Prescott and Ezekiel Elliott were new and unfamiliar elements in the league, does have some merit.

So the fact the Cowboys were finally willing to make a change, perhaps long overdue, may be enough to move the team in the right direction. The fresh ideas that Moore and Kitna, along with Nussmeier, who seems to also be a part of the newly constituted offensive brain trust, should get the chance to prove themselves.

Under the million-watt spotlight that shines on Dallas, the players have plenty of reasons to want to show the world what they can do. Change is here. We are hoping, with good reason to, that it will work.