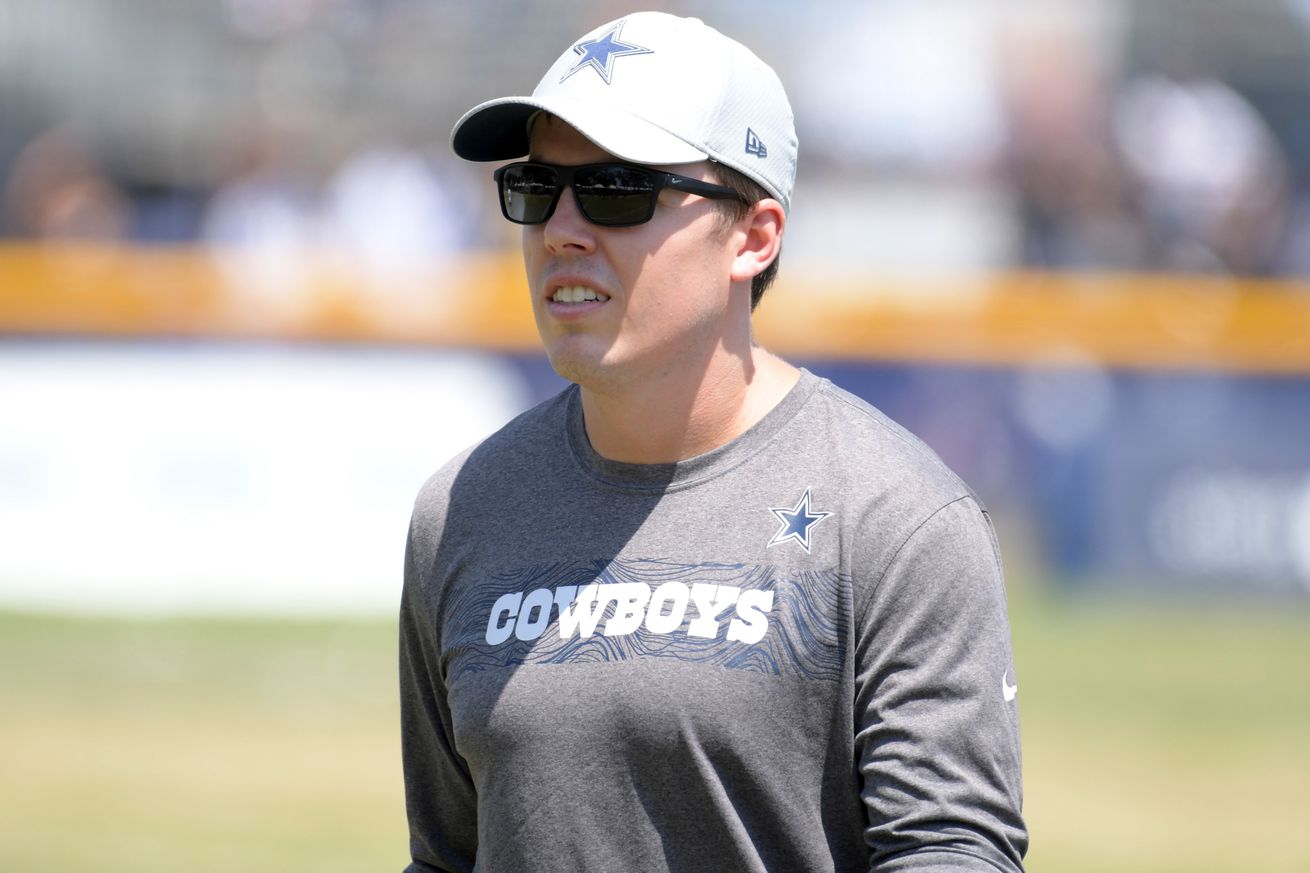 Kellen Moore and others will get a test run this weekend.

The last time Jason Garrett and his staff coached in a meaningless game, it turned out to be one of the more entertaining games of the whole year. And now, Garrett may deliver on that again with the Pro Bowl, happening Sunday at 3 PM ET.

Since Scott Linehan is no longer with the Cowboys as they prepare to coach in the Pro Bowl, and seeing as how Dallas hasn’t officially hired a new offensive coordinator yet, many are looking to the Pro Bowl practices to get a glimpse of what Garrett does. One of the interesting bits is that Jon Kitna, who is heavily rumored to be the new quarterbacks coach, has made the trip to Orlando to work with the team, although he hasn’t officially been added to the staff.

That said, during practices with the NFC Pro Bowl team, Kitna has been primarily working with the quarterbacks. Doug Nussmeier has been working with the tight ends, as he has all year, and it was Kellen Moore who was in charge of installing the offensive scheme and calling plays. Moore was unwilling to comment on whether or not that means he’ll be the team’s offensive coordinator going forward, and Stephen Jones was vague as well. Jerry Jones at least said that they like the coaches that are already on the staff, but didn’t say much more.

The general vibe that has come out of this, though, is that Moore will be the most prominent offensive coach in charge of coming up with schemes and which formations the team uses and ways that each player gets utilized in those formations, but Nussmeier is expected to be a voice in those conversations as well, with Kitna also lending his experience while focusing mostly on quarterbacks and allowing Moore to center more of his efforts on the scheme. As Travis Frederick noted this week, Moore already had a minor role in game planning this year, but that was in addition to his duties as a position coach.

Of course, there’s still the question of how involved Garrett himself will be after reports that the head coach was in line to call plays again. Jerry Jones dodged those questions by saying his head coach can do “more or less” with regards to offensive game planning, which tells us nothing. But based on these Pro Bowl practices, the most likely scenario is that the offensive scheme that Garrett’s staff is using will be compiled by Moore, Nussmeier, and Kitna, with Garrett keeping a watchful eye, and then Moore will call the plays in the all star game on Sunday. It’s being reported that Garrett might not call the plays come the regular season.

The low (non-existent?) stakes of the Pro Bowl effectively allows Moore and company to have a trial run at this; after all, the three quarterbacks Moore will be calling plays for – Russell Wilson, Mitchell Trubisky, and Dak Prescott – all possess similar skill sets, so it’s good practice for finding ways to utilize their strengths, most notably their mobility. If Garrett likes what he sees, then perhaps Moore will get the offensive coordinator job will full play-calling duties. It also gives fans a chance to see what kinds of plays Moore can draw up.

And speaking of the kinds of ideas Moore may incorporate, he offered a very brief soundbyte at one of the Pro Bowl practices that may or may not mean something:

Cowboys quarterback Dak Prescott and running back Ezekiel Elliott missed the first day of practice traveling and will be here on Thursday.

“He’s headed this way,” Moore said. “Him and Zeke are heading this way. I think they’ll be able to figure out this playbook pretty easily.

It’s possible that Moore was just being cheeky and inferring that Dak an Zeke will easily pick things up because it’s what they’ve been running their whole pro careers. Or it could mean that Moore has added some new things to this playbook and essentially grafted new skin onto the bones of the Linehan offense. Perhaps I’m reading too much into that, but we’ll find out Sunday.

At least one thing is for sure, though: if you’re a Cowboys fan, the Pro Bowl is must-watch TV this year.