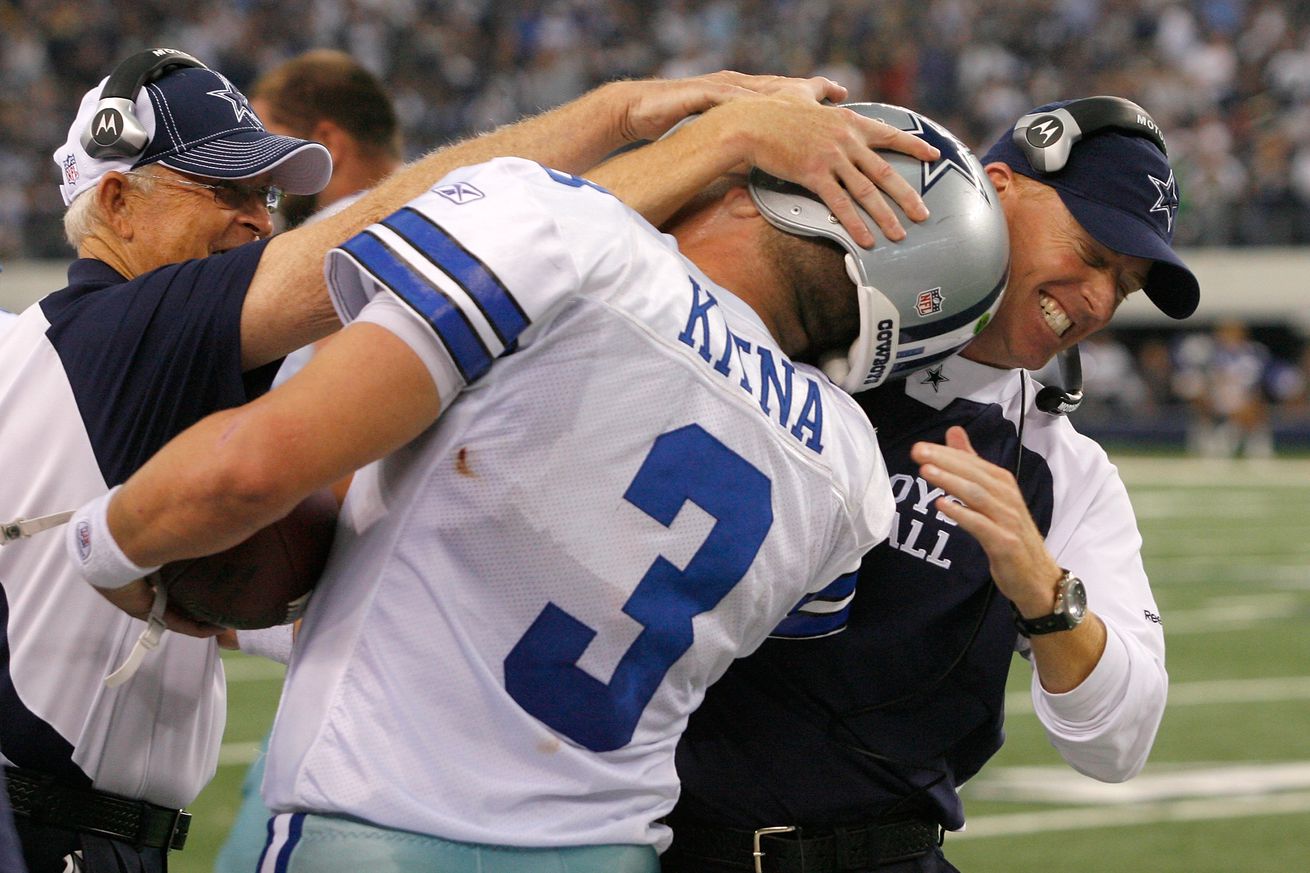 The Cowboys only made one outside addition in Jon Kitna but it could be a great move for Dak Prescott.

The only outside addition that Jason Garrett is adding to next season’s Cowboys staff is former quarterback Jon Kitna, who now seems to be taking the role of quarterback’s coach. Until last week, Kitna was set to be the offensive coordinator for the San Diego Fleet, in an upstart pro league founded by Bill Polian and Charlie Ebersol.

After retiring from the NFL in 2012, Kitna immediately began as the head coach of his alma mater Lincoln High School. In three seasons, Kitna led his team to a 24-8 record with two 3A championships. He resigned in 2015 to take a job at Waxahachie High before leaving there to coach one year at a college preparatory. Now, he returns to the last stop of his long NFL playing career in a different role.

The Cowboys hope that Kitna’s experience with young quarterbacks can help Dak Prescott continue to improve in the coming year. Kitna understudied first in Seattle, under the great Warren Moon. By 2004, Kitna had moved into the mentor role for a young Carson Palmer, who was the first pick for the Bengals. Though Kitna had stints as the starter in both Seattle, Cincinnati, as well as Detroit, he helped in the role of preparing young passers throughout his 17-year career.

Jason Garrett has always had a soft spot for Jon Kitna and his “gamer-style leadership” that made him one of the few bright spots in the lost season of 2010. With Tony Romo’s season over after a clavicle injury, Kitna quarterbacked Garrett’s offense and the Cowboys finished 5-3 after a 1-7 start under Wade Phillips. Kitna had many memorable moments including engineering the first win of the Garrett-era in the new MetLife Stadium at the Meadowlands. He would serve as Romo’s backup until 2012 but was brought in briefly at the end of the 2013 season, too.

By all accounts, Jon Kitna helped Garrett secure the Cowboys job full time and it’s not a stretch to suggest that Garrett saw a lot of himself in Kitna. A guy who was never going to be confused for a franchise-level starter but someone who was sharp, intelligent, always had himself ready and one who could rise to the challenge. Garrett was often praised in his playing days by Troy Aikman as being the perfect backup. Aikman recalled Garrett as the equivalent of another coach. When Garrett had to play, he was ready and his 1994 Thanksgiving Day game is one of the Cowboys’ fondest franchise memories.

In Kitna’s playing days, Romo would praise him as a guy who helped him by giving a second opinion from the sidelines. It’s commonplace in the NFL for backup quarterbacks to find success in coaching. The Cowboys have four former quarterbacks as assistant coaches for the the upcoming season in Garrett, Kellen Moore, Doug Nussmeier, and now Jon Kitna. Some may be critical that it’s too many cooks in the kitchen but Kitna is the position coach that Dak Prescott needs.

Dak has been a huge advocate for Kellen Moore and credits him as being instrumental in his success. If we’re to trust Dak’s opinion then Moore also played a role in the young quarterback’s resurgence this season. Moore isn’t going anywhere and is looking at a big promotion if rumors prove true, but Kitna will be just as vital to Dak’s future success. A big reason for that is because we’re hearing all sorts of conflicting reports about who will be calling the plays. At the very least, we know that Jason Garrett will have a heavy influence on the offense, which is why Jon Kitna makes sense. The last time Garrett was the play-caller was when Jon Kitna was still backing up Romo.

This offense is sure to look different in 2019 than the one Garrett was calling with Tony Romo. Having someone there that knows the subtle differences in Garrett’s style is helpful. Kellen Moore may want a focus on RPO concepts, Kitna may want Dak to take more shots in the middle of the field, who knows what differences there will be. The Cowboys seem set to having the gameplan be a collective meshing of ideas that are best for their personnel. That’s one focus that had certainly been lacking in Scott Linehan’s reign as the play-caller.

Despite everyone’s feelings about Kellen Moore, take comfort in the fact that Jon Kitna has a more extensive NFL résumé. Not only that but he also has the experience with Garrett’s offense. Moore’s only experience comes under Scott Linehan’s interpretation of this offensive scheme. Having Jon Kitna in the fold is not only good for Jason Garrett because of familiarity but it’s going to be good for Dak Prescott. Some position coaches are great sounding boards, some are great teachers, the Cowboys are hoping that Jon Kitna is going to be the best of both worlds.