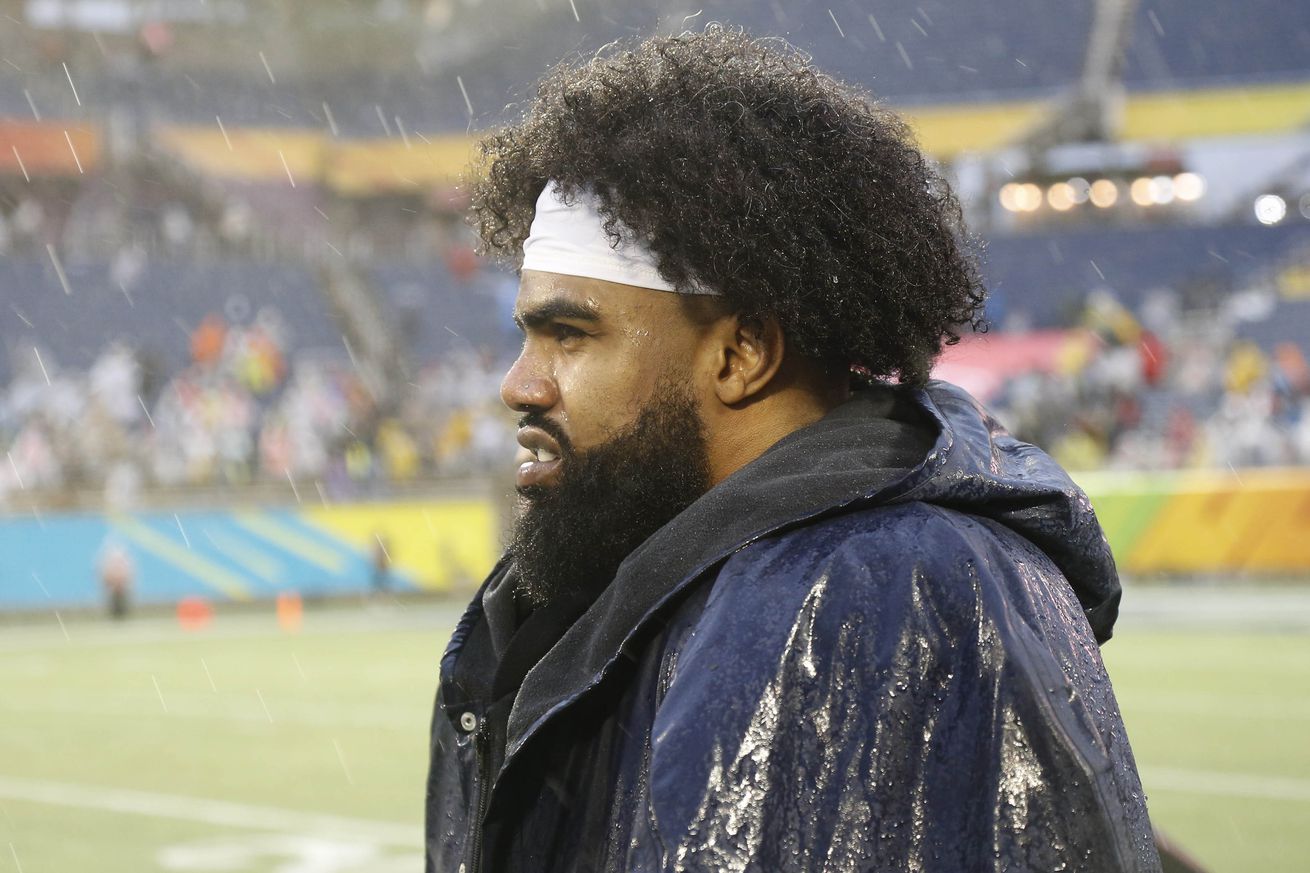 Cowboys coach Jason Garrett had fun, but no surprise NFC struggled to score in Pro Bowl – Clarence Hill, The Star-Telegram
The Pro Bowl was yesterday, and the Cowboys coaching staff was in charge of the NFC squad. Despite some creativity, the NFC offense struggled to put up points in the exhibition game.

But it’s also hard to overlook the struggles on offense after a season in which the Cowboys coaching staff had trouble generating points, resulting in the firing of offensive coordinator Scott Linehan.

Quarterbacks coach Kellen Moore, who is expected to be promoted to offensive coordinator next week, called plays during the Pro Bowl.

And it looked to be more of the same early in the game when the NFC faced fourth and goal on the 2 and Moored called a fullback dive up the middle. The play was stuffed no gain, reminiscent of the Cowboys season-ending loss to the Los Angeles Rams which was keyed by an Elliott run up the middle for no gain on 4th and 1.

The NFC trailed 20-0 before Prescott touchdown pass to Hooper. Cowboys receiver Amari Cooper also dropped a would-be touchdown pass from Prescott when the ball bounced off his helmet.

The offense generated just 148 yards compared to 416 for the AFC.

–Ezekiel Elliott got involved in ‘all three phases,’ as Cowboys head coach Jason Garrett might say. In addition to his normal offensive duties (the league’s rushing champ had three carries for a game-best 33 yards and two catches for 14 yards) Elliott ran a 22-yard fake punt for a first down and entered the game as a third-down pass rusher in the third quarter, drawing big smiles from Garrett on the sideline. Giants running back Saquon Barkley and Saints running back Alvin Kamara also got a little work as situational pass rushers. Elliott also took snap at quarterback on a read-option handoff in the first quarter.

Zeke behind center?!@EzekielElliott hands off to @Saquon

He also got a first down on a fake punt:

TRICK PLAY
Fake punt to @EzekielElliott for an NFC 1st down #ProBowl pic.twitter.com/hEpKi7Gjk9

And he rushed the passer!

With Scott Linehan’s firing earlier in the month, the Cowboys’ quarterbacks coach Kellen Moore from last season was slated to call plays for the NFC during the Pro Bowl under head coach Jason Garrett, a potential preview of the Cowboys coaching staff next season.

With Moore calling the plays, the NFC only put one touchdown on the board in a 26-7 loss, feeding into the narrative of the Cowboys’ offensive struggles in the season.

Among the most notable plays were two featuring Cowboys running back Ezekiel Elliott taking a snap at quarterback and also rushing the passer on defense.

The most Jason Garrett thing of all time. He’s “aggressive” in the Pro Bowl but then runs a fullback dive. . It’s the Pro Bowl. Y’all don’t have anything more creative to run there?

The Cowboys would like the often-injured Lee back next season, but at a reduced rate. Lee is more of a luxury than a necessity with the emergence of 2018 first round pick Leighton Vander Esch and 2016 second-round pick Jaylon Smith. Once Lee returned from hamstring injuries that sidelined him for several games this season, he saw only spot duty. Lee had been an every-down linebacker the last few years, when healthy. The 32 year old was on the field 18.7% of the time (25 of 134 defensive plays) during Dallas’ two playoff games.

Urlacher wearing a Cowboys jacket and then Mitch throws an interception right after. I guess God just wants to ruin the whole month of January for us. The first weekend of it wasn’t enough

Oh, and Dak Prescott threw the NFC’s only touchdown!

Redskins believe Alex Smith (leg) will miss all of 2019 – Nick Shook, NFL.com
Looks like Smith’s injury will keep him out a while longer.

NFL Network Insider Ian Rapoport reported the Washington Redskins are planning as if they won’t have Smith in 2019, according to sources informed of the situation. Washington believes Smith will miss the entire season with issues stemming from the compound fracture suffered in Week 11.

If Smith ends up being ready for the season, the Redskins will be pleasantly surprised, Rapoport added.

When healthy, Smith is a reliable starter who can do more than enough to help a team to the playoffs. Washington is very much still tied to Smith, who has four years left on his deal, $22.1 million in bonuses and a back-loaded cap number that escalates with each season.

Dallas Cowboys 7-round Mock Draft: Cowboys get offensive (Reid 1.0) – Reid Hanson, SportDFW
Who doesn’t love mock drafts? This one has the Cowboys taking an intriguing receiver with their first pick.

Ask around which receiver turned the most heads in Mobile this past week and they’ll probably tell you that man is Penny Hart. Hart came into Senior Bowl week on a lot of scouts’ radar but he was far from being the player to watch. But after lighting it up all week, he looks like he moved into the second round of the draft joining draftnik favorites Deebo Samuel and Andy Isabella.

The lightening quick slot man effortlessly breaks on his routes and creates enormous separation no matter who is covering him. While all the talk in Cowboys Nation revolved around Andy Isabella, it’s Hart that looks like the premiere slot man to take over for Cole Beasley inside (yes, I think Beasley will be leaving). Hart’s long arms (31 3/8 inches) combined with his natural athleticism give him a shockingly wide catch radius.