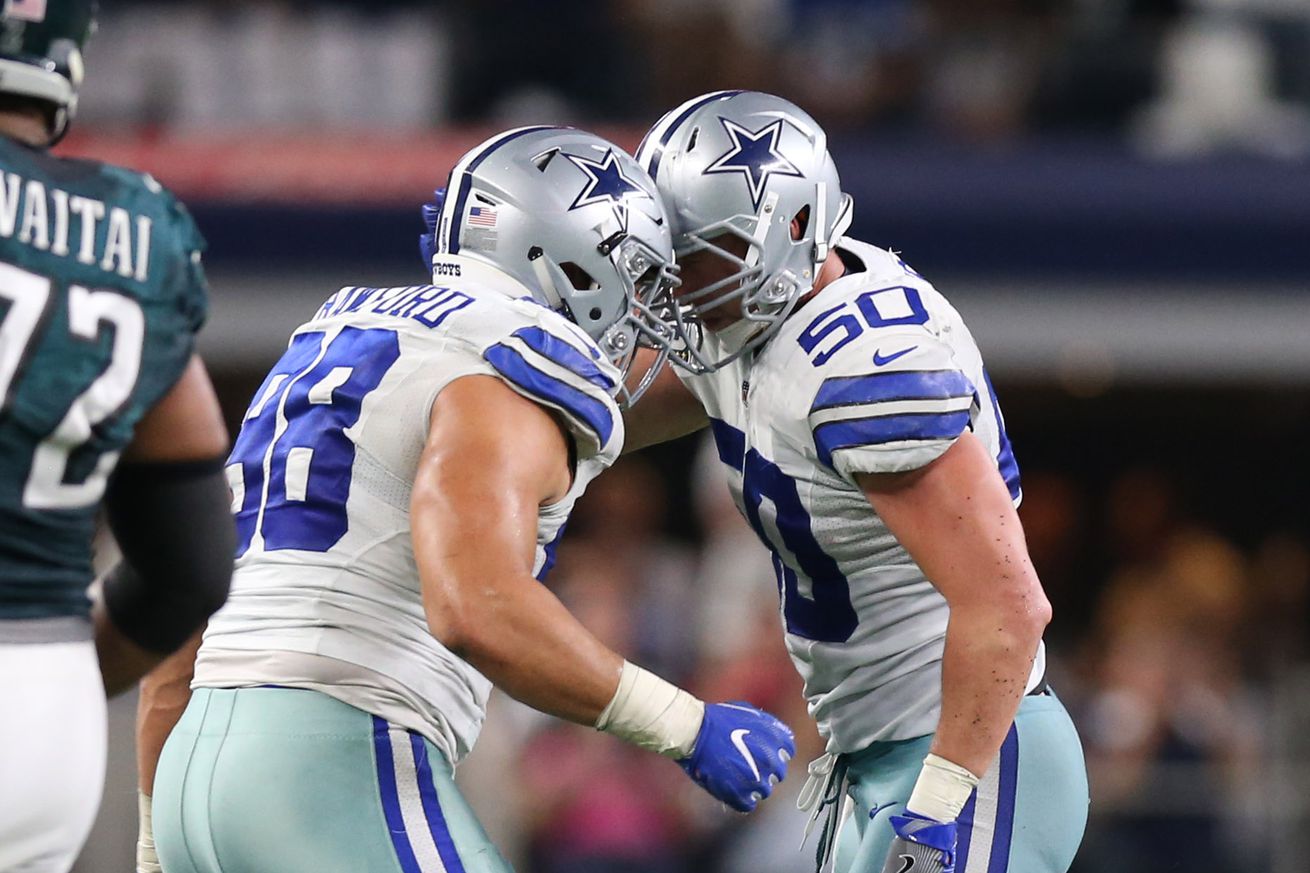 The Cowboys have released some big name veterans over the last couple seasons, but who’s on the chopping block this year?

The Dallas Cowboys will have over $50 million in cap space this offseason and what a great feeling that is. Gone are the days when Cowboys fans had to sweat it out as the front office attempted to finagle their way out of “cap hell.” They now have some money to spend that will allow them to retain their own talented players like the soon-to-be rich DeMarcus Lawrence. Of course, it’s taken a while for the team to get to this point. It’s required some good drafting that keeps young starters playing on cheap rookie deals. But it’s also required some tough business decisions that have sent some fan favorites packing.

In the offseason of 2017, the Cowboys parted ways with Tony Romo after 13 seasons. Romo became the team’s all-time leader in yards and touchdown passes, but after a great rookie season from Dak Prescott, the team decided to go with the young arm. Then, during the offeason last year, the Cowboys released Dez Bryant after eight seasons. He was the team’s all-time leader in touchdown receptions.

These moves hurt many fans from an emotional standpoint, but they were very important business decisions. The Cowboys are now able to use the Dez money for a player like Amari Cooper who is younger and more fundamentally sound. And these types of decisions will continue because, as Romo himself said, “football is a meritocracy.” As younger, more talented players show up, these once prized veterans just aren’t as valuable anymore.

This leads us to the new crop of potential cap-casualties. As the team prepares for the 2019 season, decisions have to be made to determine which players are worthy keeping around and which players should be released in a cost-cutting move. Here are four players who could save the Cowboys some cap space in 2019 if they are released:

For years fans have had to grimace whenever the veteran defensive leader wasn’t on the field. It’s usually meant bad news for the defense. But that appears to be a thing of the past thanks to a revamped linebacker tandem of Jaylon Smith and Leighton Vander Esch. Even a healthy Lee will now serve as a backup to Van Jaylon. Smith played 95% of the defensive snaps and Vander Esch played 77%. Lee only saw 21% of the reps.

Lee has never played a full 16 game season. Ever. In the nine years he’s been in the league, Lee has missed a total of 51 games. That’s more than three full seasons. He’ll be 33-years-old when the new season starts so healing up isn’t going to get any easier. Keeping Lee healthy is a daunting task that the Cowboys can’t seem to pull off regularly.

Paying out his $7 million base salary would be risky enough if you were left wondering if he could make it through the season healthy, but then how much is the team really gaining when he’s available? He’s not going to be stealing snaps from Smith and LVE, so would it really make sense to pay that kind of money for a backup linebacker?

Some might argue that the front office will throw Lee some love; keep him under contract; and just take advantage of his on-field coaching and leadership skills. That’s not out of the question. But the Joneses have already been generous to Lee. He’s made over $42 million throughout his career. They simply cannot justify keeping Lee on the roster for a cost of $7 million against the cap. We all love Lee, but let’s be smart about this.

Prediction: Lee takes a pay cut or retires and becomes part of the Cowboys coaching staff.

Fans have been waiting for this moment a long time – the year when it’s financially feasible to release Tyrone Crawford. After years of being stuck underwater with this contract, the team could choose to part ways with their veteran defensive lineman and save about $6 million of cap space.

The problem is, things have changed when it comes to Crawford. Sure, it’s easier to get out from under his contract since the dead money hit is much lower now, but do they really want to move away from Crawford? He’s actually been a valuable part of this defense in recent years. Crawford played in 62% of the defensive snaps this year which is more than any other defensive lineman not named DeMarcus Lawrence. Part of the reason he’s gotten so much action is that he can play inside and outside. This allows him to play the edge on early downs, saving Randy Gregory for more of the pass rushing situations. And when it comes to pass rushing, Crawford can just slide inside, partnering with Maliek Collins and allow Antwaun Woods to come out of the game. His flexibility allows the Cowboys to arrange the defensive line so they can put their four most effective linemen out there during any given circumstance.

Not only is he one of the more respected leaders in the clubhouse and a utility knife type of player, he’s also very durable. Despite dealing with nagging injuries throughout his career, Crawford has only missed four games in six NFL seasons. Even when he was carted off the field in what looked like a serious injury in the game against Tampa Bay, he was back a couple weeks later for the playoffs.

Everyone loves him but that alone won’t save him a spot on the roster, but let’s face it – he’s still producing. He’s 29-years-old so it might be a little early to cut him loose. Next offseason, the Cowboys may revisit his situation as he would be a $8 M savings for 2020, but even then, it wouldn’t be surprising to see them hang on to him.

Prediction: It’s funny since this is the first year the Cowboys have a potential out from his contract, but Crawford sticks around.

The signing of Allen Hurns last offseason was supposed to be step one of the wide receiver rebuild of 2018. But things didn’t turn out the way they were hoping with the former Jacksonville star. He only caught 20 passes for 295 yards and two touchdowns. He never had a single game where he reached 75 yards receiving.

While Hurns might have been plan A, the Cowboys finally struck gold when they traded for Amari Cooper midseason. Before Cooper arrived, Hurns was averaging 43 snaps per game, but that number dropped to 17 per game after the trade.

While Hurns is a high-character guy and his teammates love him, his role on the team doesn’t come close to justify spending $5 million of cap space on him. With Cooper the lead dog and rookie Michael Gallup having a strong first season, the Cowboys have a nice start towards building up their receiving group. Even with Cole Beasley’s future in Dallas in limbo, it’s hard seeing them retain Hurns for that price.

Prediction: Released. The Cowboys intentionally configured his contract to give them this out if things didn’t work out. Smart move.

When Terrance Williams scored 13 touchdowns over his first two seasons with the team, it looked like the Cowboys had finally found their deep threat complement for their passing attack. And after finishing out a solid rookie contract, Williams was re-signed for what appeared to be team friendly deal.

But then Williams disappeared. He managed to have over 500 yards receiving in 2017, but never found the end zone once. And this past season, he wouldn’t find the end zone either as he only played in three games this season. A foot injury and a suspension shelved Williams for the season and it sure looks as if his time in Dallas is over. But is it?

Prediction: The Cowboys don’t save very much by cutting him. He might make it past the initial cuts as the team re-evaluates their wide receiver situation after free agency and the draft, but TWilly will have to prove his worth if he’s going to make the 2019 roster.