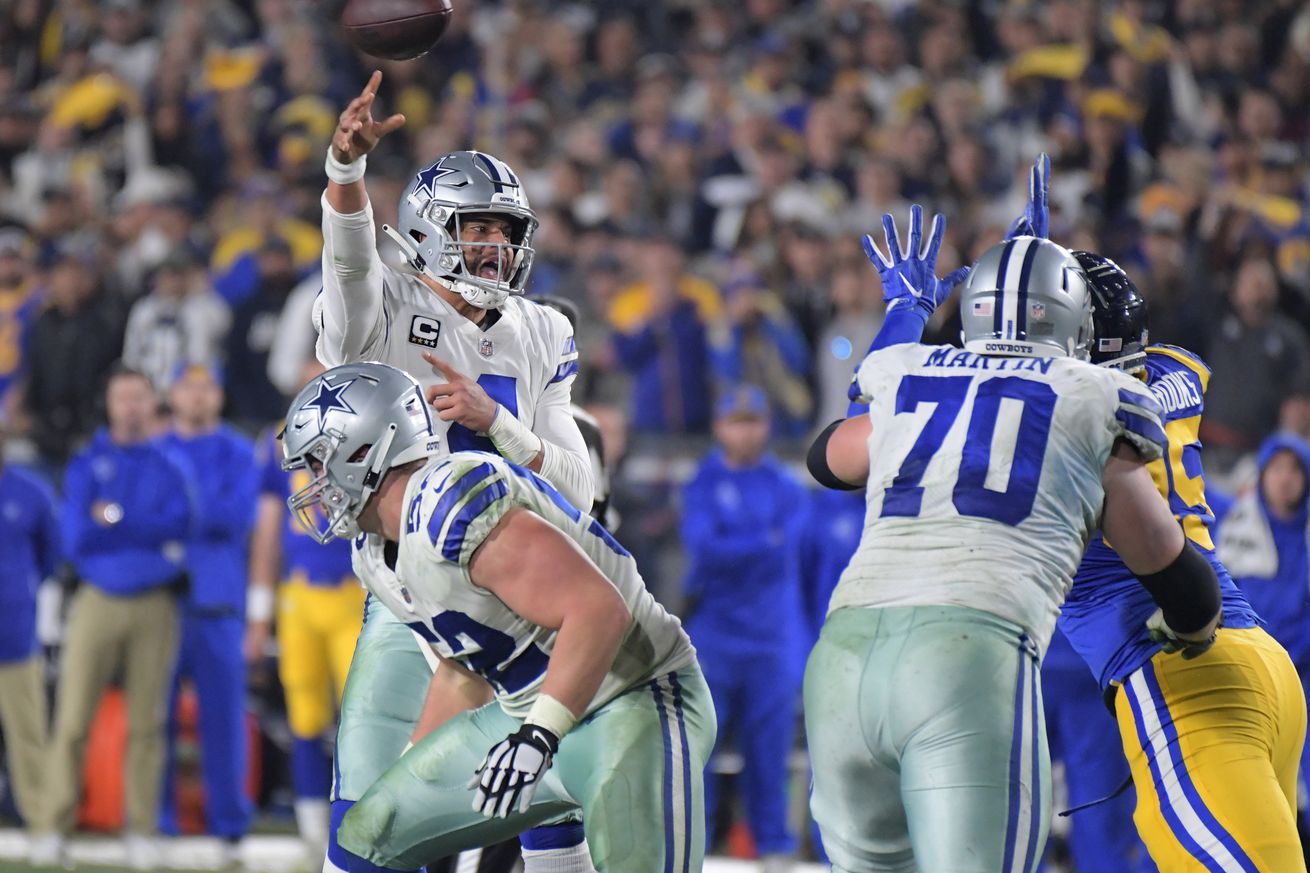 The Cowboys have a formula and it requires a heavy dose of great offensive linemen.

The Cowboys offensive line faced a gauntlet of adversity in 2018 beginning in training camp with the loss of Travis Frederick to an autoimmune disease. Zack Martin, Tyron Smith, and La’el Collins all played through numerous nagging injuries. Connor Williams struggled with strength as rookies tend to do. Later in the year, Williams got dinged up and was replaced by Xavier Su’a-Filo only to return to the lineup when Su’a-Filo got hurt. Though we have to be somewhat proud of the way they played, Dallas did win a playoff game after all, this line was compromised. When the line struggles in Dallas, the entire offense struggles, it’s their identity as a football team.

Now, the Cowboys certainly had moments but they just weren’t the dominant line that could run it down everyone’s throat with confidence. Third and shorts, fourth and ones, and especially red-zone scoring, weren’t a given like it had been the past two years. Dallas lacked the talent in the middle to line up and move guys off the ball,. The league’s better defensive tackles harassed the Cowboys, stuffing their ability to run. Ezekiel Elliott may have managed to win the rushing title but 52 of his 304 attempts were stopped for no gains or negative yards. If the Cowboys cannot run the football efficiently, it severely disrupts their ability to sustain drives.

The Cowboys’ front office will have their hands full this offseason where large portions of their focus will be consumed by signing or extending big-time players like DeMarcus Lawrence and Byron Jones. They will likely also explore the benefits of early extensions for Amari Cooper, Ezekiel Elliott, and Dak Prescott. While there will be a lot of ink spilled over that the next few months, for the first time in three years, the majority won’t be spent on the offensive line.

Dallas has been the best in the league at drafting talented offensive linemen, it’s the lifeblood of this football team. Good linemen are hard to find and the Cowboys are fortunate to have an All-Pro trio of Tyron Smith, Travis Frederick, and Zack Martin. They are also fortunate that all three are locked up through 2023. Right tackle La’el Collins still has a year left on his deal and Connor Williams will be in year two of his rookie deal. All five are expected to be healthy and ready to roll for the offseason program. Though that, on paper, seems to be an encouraging sign, it doesn’t mean they are set because depth is still very much a concern. In fact, you could say offensive line depth is a scarcity across the NFL, that’s why the Cowboys need to consider all options be it draft or free agency.

The Cowboys have only two linemen set to hit free agency, Cameron Fleming and Marcus Martin. Prior to showing up out of shape, Marcus Martin had a small fan club including Bryan Broaddus. Unfortunately, he tore a ligament in his toe in the preseason opener and was placed on IR. Martin hasn’t played a game since the 2016 season and it’s not looking promising that his career will continue in Dallas with Xavier Su’a-Filo under contract. As for swing tackle Cameron Fleming, he didn’t have many believers after a so-so preseason. However, when he was asked to step in for Tyron Smith, he played much better and that’s valuable. Fleming is not the best tackle that will be available in free agency but there is a chance he’ll be much more affordable.

The Cowboys have a lot of resources invested already in the offensive line and this team has shown a disdain for overpaying in free agency. When Fleming first signed, many thought his deal was too low for a guy who had played well on a Super Bowl Patriots’ team. After a low-key first year in Dallas, they may be able to get Fleming back on a relatively similar deal to what he previously signed. That’s worth the investment for a guy with familiarity and experience as swing tackle has become a very important role for the Cowboys. With Tyron missing a couple of games in each of the last three seasons, it’s clear that a quality backup is necessary. For the remainder of his career, they will be managing Smith’s back tightness.

Without question, guys like Joe Looney and Xavier Su’a-Filo overachieved and they are an example of quality depth. Still, with a team that is predicated on their ability to bring a dominant running game and balanced passing offense, the Cowboys need to keep going after quality linemen. They can’t have another 60 sack season and hope to keep the quarterback alive, they can’t afford to have their running game hit walls when facing elite defensive tackles. The Cowboys made this their philosophy on offense and made significant investments for the future.

The experiences the Cowboys had in their playoff exit at the hands of the Rams was a painful reminder of where these games are won. Whether it’s looking for the right free agent acquisition, re-signing a few guys, or using a draft pick, Dallas must continue to invest heavily in the trenches. It’s the best thing this Cowboys team does and that’s a great reason to stay ahead of the curve.