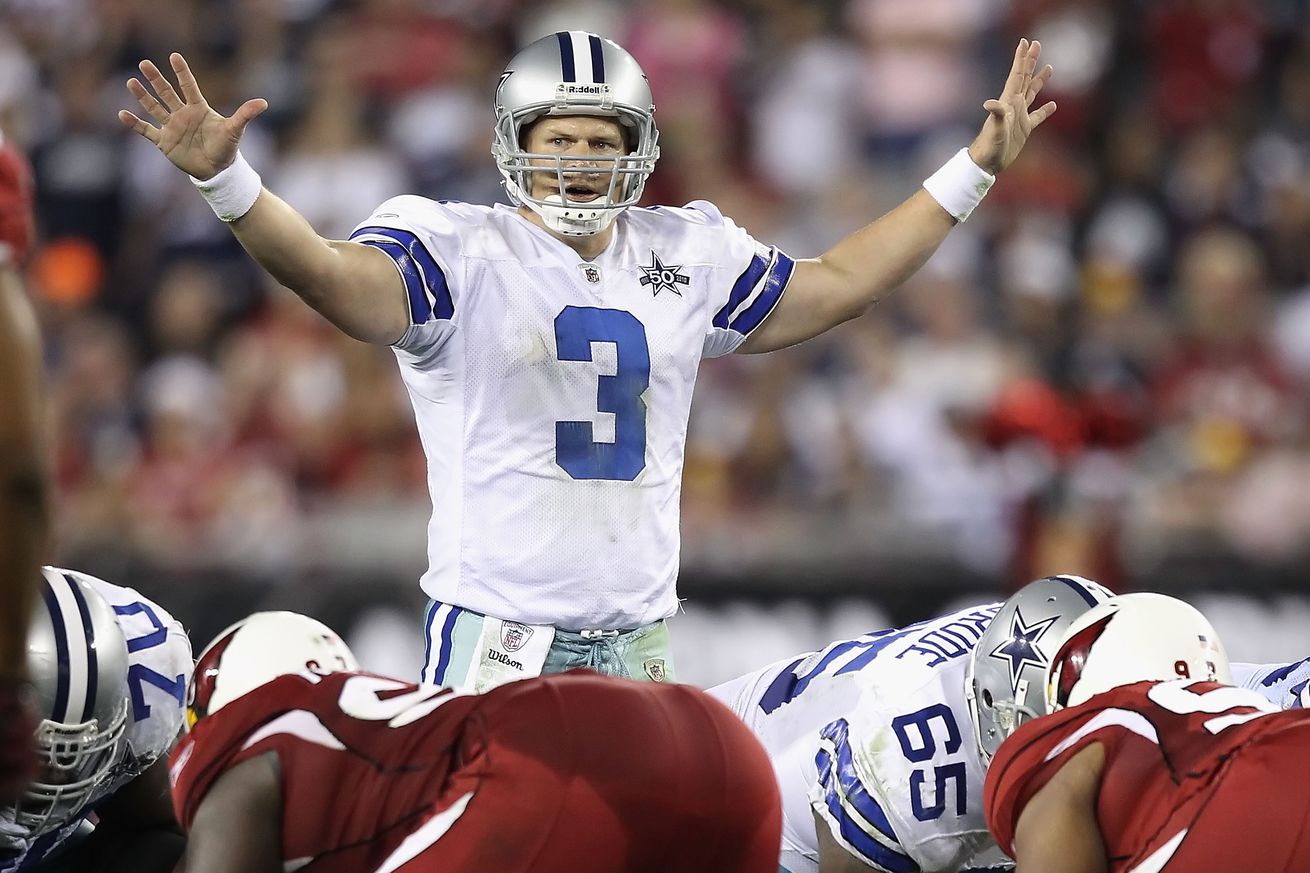 On Thursday, the Cowboys made official what we have all been expecting for the last week or so: Kellen Moore has been promoted to offensive coordinator and Jon Kitna has been hired as the new quarterbacks coach. A lot of people are understandably focused on Moore’s elevation to the coordinator position, especially with news that he will likely call plays, but Kitna’s hire could be as important.

Kitna will be the third quarterbacks coach in Dak Prescott’s four years in the NFL, and arguably the best one he’ll have. Kitna brings with him 17 years as a quarterback in the NFL playing for four different teams, including the Cowboys.

Kitna spent the first five years of his career with the Seahawks, and he became the starter from 1999 to 200 under Super Bowl-winning head coach Mike Holmgren. He was later traded to Cincinnati prior to the 2001 season to replace draft bust Akili Smith, and eventually became the backup to Carson Palmer; it was here where Kitna took on a mentor role with the young Palmer. After leaving the Bengals, Kitna went to Detroit with newly hired head coach Rod Marinelli. Kitna’s offensive coordinator there was Mike Martz, who had built the Greatest Show on Turf for the Rams in the late 90s-early 2000s, and Kitna’s quarterbacks coach was Adam Gase.

The Lions would infamously go 0-16 in 2008 and the whole staff was fired. At this point, Kitna came to Dallas to back up Tony Romo. Little did he know that he’d become the starter the very next year after Romo broke his collarbone, and Kitna’s veteran experience and understanding of interim head coach Jason Garrett’s offense is what helped lead the team to a 5-3 record under Garrett. Kitna spent one more year in Dallas before retiring, but also came out of retirement for one game in the 2013 season finale to be a last resort backup.

Since then, Kitna has served as a head coach in the high school ranks. He spent three years at his high school alma mater in Washington, where he went 24-8. He spent the next two years at a Texas high school, going 12-8 there, before spending 2018 coaching an Arizona high school and finishing with a 7-4 record.

Prior to accepting the quarterbacks coach position with Dallas, Kitna was set to be the offensive coordinator for the San Diego Fleet of the startup league Alliance of American Football. It reunited him with Fleet head coach Mike Martz, and below you can hear Kitna talking about Martz’s offensive philosophy:

That idea of using physicality and power as the source of an offense that can become a high-flying unit seems to play into the personnel strengths of the Cowboys, and Kitna’s familiarity with that concept will surely be prevalent in the staff meetings each week.

But what makes Kitna such an important hire for the Cowboys is his attention to detail when working with quarterbacks. Bobby Belt found video clips of Kitna during a coaching clinic where he breaks down the fundamentals of coaching the position and focusing on footwork.

Jon Kitna at a 2013 coaching clinic: “Most people believe that the quarterback position is about your arm; it’s not. It’s not, it’s not. It’s about his feet.” pic.twitter.com/ogWzv8PzVe

Jon Kitna on the nuances of throwing to the left side of the field as a right-handed quarterback: pic.twitter.com/e8zqmFL3Vi

One of the biggest weakness for Prescott thus far in his career has been his footwork. At times, Dak gets too jumpy in the pocket because of it and will either be behind on timed throws or just not have enough strength on his passes because his feet aren’t set properly. Kitna talks specifically about the so-called ankle eye, which helps dictate where the ball goes. Often times when Dak throws inaccurate passes, it can be traced back to poor footwork, and it seems as if Kitna will place a heavy emphasis on fixing those issues.

Jon Kitna on empowering your quarterback by embracing risk:

“For 10 years I’d been coached to be cautious. You always take a profit. And here was this coach saying, ‘when I call it, and if you get what we’re looking for, you rip it. And if something goes wrong, that’s on me.'” pic.twitter.com/YFf9yjb1Ru

Jon Kitna using Tony Romo as an example of playing to a quarterback’s strengths: pic.twitter.com/0VDz3kG9ot

Kitna then goes on to talk about two very important aspects for the Cowboys offense going forward: taking risks and playing to the strengths of the quarterback. He explains what Martz taught him in Detroit and specifically notes that “if you get what you’re looking for, you rip it. And if something goes wrong, that’s on me.” This should be music to Cowboys fans’ ears, as a big criticism of the offense under Scott Linehan was that Dallas checked down a lot. If Kitna can empower Dak to take those risks more often when he gets what he wants, this offense could take off.

Kitna also talks about catering to a player’s strengths and specifically notes how Tony Romo’s strength was throwing to more stationery receivers who weren’t cutting in across the field, and so Romo was allowed to make more of those kinds of throws. Kitna emphasizes several times that coaches need to “find out what your quarterback does well [and] emphasize those things.” This highlights another common complaint about Linehan, that he tried to fit Prescott to his system instead of altering the system to fit Prescott.

Overall, Dallas likely will not change their offensive scheme in a significant way, and their offensive philosophy is still going to center around establishing the run with Ezekiel Elliott and controlling the time of possession. That’s not necessarily a bad thing, but Dallas clearly wanted more creativity with their play-calling. They think Moore brings that, but they’re surrounding him with other minds like Kitna to assist the young coach.

Not only will Kitna’s background have a positive effect on Moore, but he may also bring a big focus to refining Prescott’s mechanics in a way that hasn’t been addressed since Dak came to Dallas. And if Kitna can get his quarterback’s footwork in order, Dak will take a huge step (pun intended) forward as a passer. And that could be more important for the success of this offense than any offensive coordinator ever could be.