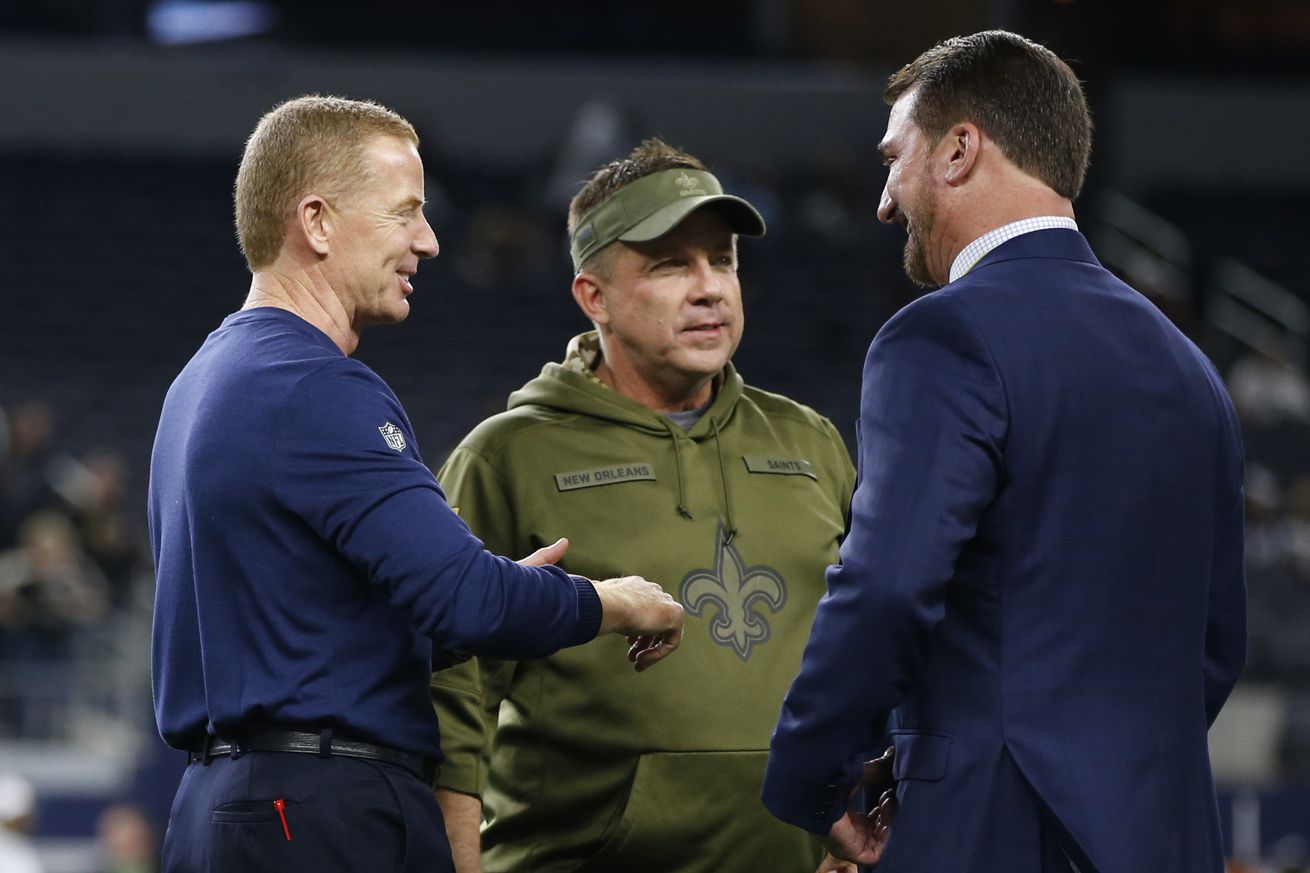 Click-bait or solid rumor? The Sean Payton to Dallas story loves on.

The theory goes like this: The Cowboys part ways with Garrett after his contract expires, and the Cowboys lure Sean Payton from New Orleans to Dallas in 2020.

It may be easier said than done. The Cowboys would need to compensate the Saints for allowing Payton to leave, and that compensation likely would include at least one draft pick. The Cowboys also would have to pay Payton, who likely would expect (and rightfully so) eight figures per year, at a minimum.

As far as we know, the Jones’ have no interest in extending Jason Garrett ahead of the 2019 season. Is that the right call?

There are only five head coaches in the NFL who have been in their positions longer than Garrett. They are the New England Patriots’ Bill Belichick, the Baltimore Ravens’ John Harbaugh, the New Orleans Saints’ Sean Payton, and Pittsburgh Steelers’ Mike Tomlin. Seattle Seahawks’ head coach Pete Carroll was hired in 2010, the same year Garrett took over the Cowboys’ franchise as interim head coach from a fired Wade Phillips midseason.

What do all of the above head coaches have in common? All five have earned at least one Super Bowl win during their tenure. That’s the stark difference between those five and Garrett, who has never even won in the divisional round of the playoffs.

Still, Garrett enters 2019 as the head coach of the Cowboys. That’s despite starting last season with a 3-5 record. Following a midseason trade for wide receiver Amari Cooper, Dallas was able to finish the year at 10-6, becoming the NFC East champions and posting a playoff victory against the Seahawks.

With the Super Bowl fresh in everyone’s mind, just how close are the Cowboys to getting to the big game? Dak Prescott thinks they are right there.

At 25, Prescott completed 67.7 percent of his throws this year for a career-high 3,885 yards. He also threw 22 touchdowns and eight interceptions, leading the Cowboys from a 3-5 start to a 10-6 finish and NFC East crown.

Still, Irvin said that he wanted to see Prescott controlling the football game, showing he has command of the offense and show that he is really growing.

While the quarterback initially said he didn’t see Irvin’s comments in the Dallas Morning News, he responded to them on Saturday.

”It’s about taking the next step in my game in every aspect of my game,” Prescott told UPI. “Don’t know necessarily what Michael or someone else sees when they say that or what they are looking for. For me it’s about continuing to progress my game and being cleaner, being faster and being more confident and precise in what I do in decision making.”

”I know if I do that, I’m going to play my best ball and we are going to have a hell of a team.”

Cowboys could open next season up with the New England Patriots – Cole Patterson, Blogging the Boys

New England vs Dallas. Let’s do it.

When the Super Bowl is over, it is never too early to look ahead to the 2019 season. The offseason will fly by quicker than we think.

ESPN’s Adam Schefter reported on Sunday morning that the NFL is looking into a handful of games to open next season up. The Patriots-Chiefs and Rams–Saints are among the potential matchups. Schefter also says that the Dallas Cowboys are in the mix to play the season’s first game.

Three rookies received votes for the award, but the Wolf Hunter wasn’t among them. Instead, Indianapolis Colts LB Darius Leonard and Los Angeles Chargers S Derwin James walked away with the vast majority of the votes. For the Denver Broncos, LB Bradley Chubb received only one vote.

This is actually surprising to me. Leighton Vander Esch’s season was pretty impressive. His performance on the field week in and week out was dominating. How can you make the second-team All-Pro and get no votes while Bradley Chubb gets one?

Now granted, the competition this year for this award in particular was loaded with notable nominees. After all, Darius Leonard led the NFL in tackles, had seven sacks and forced four fumbles. Being completely honest and unbiased here, I would’ve voted for Leonard as well. Derwin James managed to translate what he did in college to the field and played many different positions. He even lined up in various spots as a linebacker. For the Chargers, he did it all.

Other than stud pass rusher DeMarcus Lawrence, who should the Cowboys prioritize in free agency?

Sherrington: Amari Cooper. He’s got one year left, and they need to make sure he doesn’t get any ideas about leaving. He showed in the second half of this season that he’s as good as any WR in the league, in my opinion. Runs great routes. Big. Physical. Runs hard after the catch. Great speed. Only question coming in was his hands, and that’s not an issue. He’s not like T.O., another great receiver with a reputation for drops. Unlike T.O., Cooper catches with his hands, not his chest. Cooper’s drops came from turning to run before he’d secured the ball. I wouldn’t say he has great hands, but they’re good enough. If he puts together an entire season like the nine games he played for the Cowboys, he’s going to have great numbers. Maybe he’d like to see what he could do in a big-time offense. The Cowboys can’t afford to let him wonder too long. They also need to justify that first-round pick.