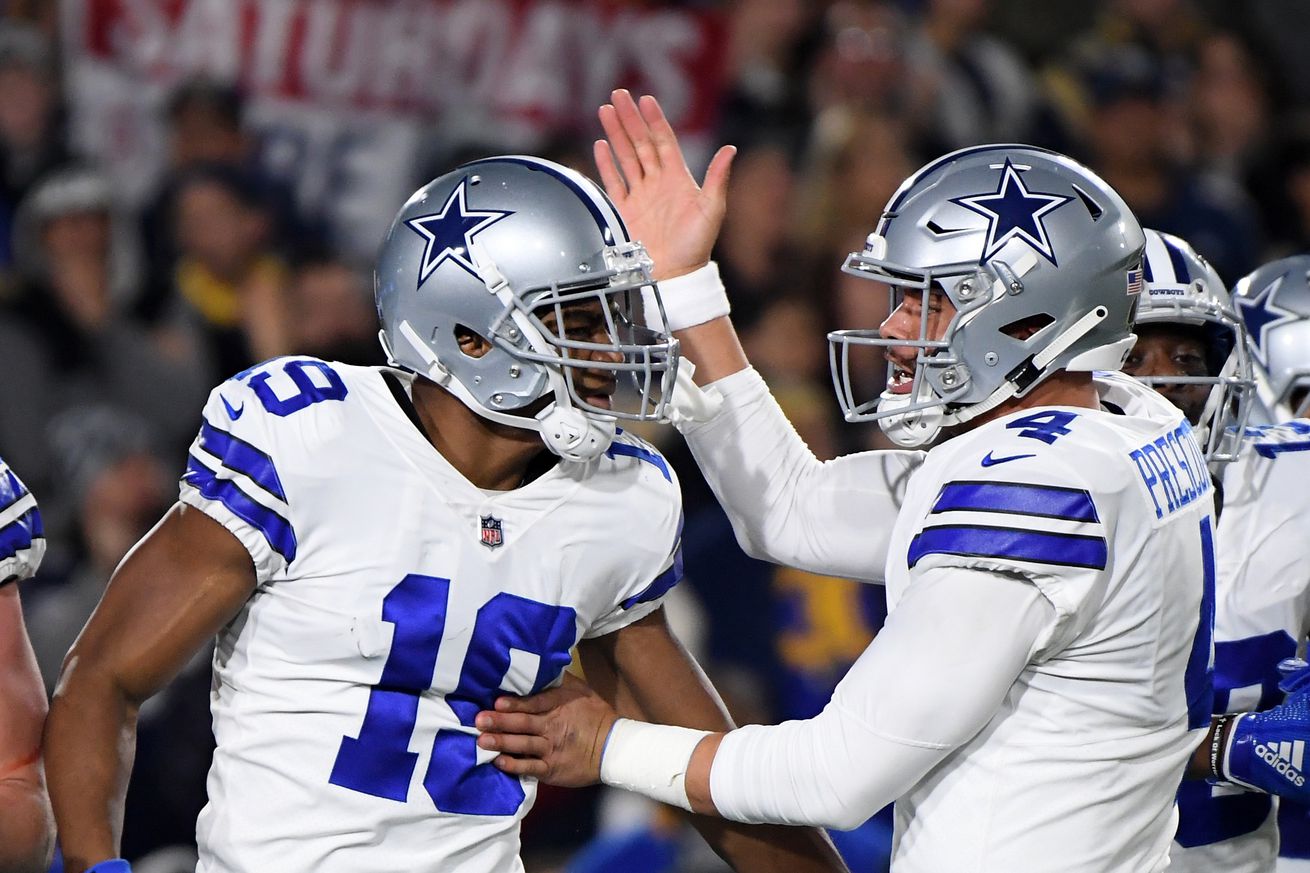 What’s it going to take to make the Cowboys a championship caliber team?

The Dallas Cowboys are a good football team. Over the last five seasons, the team has won the NFC East three times and finished third overall in the conference when everything was said and done. They’ve now put together three straight winning seasons and there is no reason to believe they can’t make it a fourth. In fact, watching the NFC Championship game and the Super Bowl might have been a little frustrating because the Cowboys were good enough to win those games based on how those teams played. Of course, that’s purely speculation, but fans are hopeful such a thing can become a reality soon. Real soon.

The Cowboys are a good team, but they can be better. They are trending in the right direction. What is it going to take to get over the Divisional Round hump? In this two-parter, we look at five things the Cowboys need to do to be a championship caliber team in 2019.

1. Get Moore creative on offense

The Cowboys offense has gradually gotten worse over the last two seasons. Last year, they ranked 22nd in the league, averaging 21 points per game. With an improved defense, this team has it in them to be a force, but the offense has to be clicking for that to happen. Dallas flashed great offense at times; six times they scored 27 or more points and four of those instances came during the final six regular-season games. But then they would also throw out a goose egg late in the season against Indianapolis. The offense just wasn’t playing to their potential.

The team addressed this issue by firing offensive coordinator Scott Linehan and promoting former quarterbacks coach Kellen Moore. Now, it’s just a waiting game to see if this was the right move or not. While Moore is unproven as a coordinator, we have to remember that Jason Garrett has kept him on his staff for a reason; a reason we have all had trouble understanding. That reason could reveal itself real soon. One thing is for sure, Prescott sure thinks highly of him.

“He can be crazy creative…He’s a phenom, one of the young phenoms in seeing the game, knowing where the game was & this new transition into this new style of play. He sees it & he gets it.”

2. Improve in the Red Zone

The Cowboys had all kinds of problems scoring touchdowns in the red zone last season. After 14 games, they were ranked 31st in the league, converting only 44% of their red zone opportunities into touchdowns. They did improve over their last four games that included their two playoff contests, but the ineptness in the red zone plagued them most of the season. Some of this is attributed to the fact that they have no push in the interior offensive line with Travis Frederick out and rookie Connor Williams starting at left guard.

Ezekiel Elliott has run the ball 38 times in the red zone this year. Even excluding touchdowns or short yardage conversions, 22 of those runs have been for 2 yards or fewer. 11 for no gain or a loss.

Then there’s also the fact that the team’s top two red zone targets a year ago, Dez Bryant and Jason Witten, were gone.

Some of these things will work themselves out. If Frederick comes back healthy, the Cowboys short-yardage running game will improve. Amari Cooper and Michael Gallup are building more chemistry with Prescott and they are both good red zone targets. And the young tight ends started showing improvement down the stretch. Dalton Schultz missed blocking assignments earlier in the year that stymied red zone opportunities, but he got better throughout the year. And Blake Jarwin emerged as a viable receiving threat when he racked up three touchdowns in the season-finale.

Tight ends coach Doug Nussmeier was a name we heard as a possible candidate to be the team’s new offensive coordinator. That job was filled by Kellen Moore, but that’s not to say that Nussmeier won’t be involved in some of the offensive scheming. He’s certainly going to be a big part of the continued development of these young tight ends and considering how well he did with them last season – this group should be even stronger in 2019.

3. Get Dak to throw downfield

Dak Prescott will be the first to tell you that he just wasn’t comfortable at times last season. In fact, he expressed those exact sentiments last week when he was on 105.3 The Fan.

That’s understandable. Cole Beasley was his most targeted wide receiver last season, but the next five highest targets weren’t even on the team in 2017. One of them didn’t even join the squad until the eighth game of the season last year. Once Amari Cooper arrived, things improved significantly for Prescott.

“I think that more than anything just allowed me to settle in. But when you have a guy like Amari (Cooper), his ability to get open, the way he studies and prepares for the game is second to none … and that’s what makes him a No. 1 receiver.”

Being comfortable and having the confidence to make throws is what we want to see from the Cowboys young quarterback. And new quarterback coach, Jon Kitna, could be the right man for the job.

If there’s one thing that infuriates me about Dak Prescott, it’s that he’s too cautious. He just plays it safe far too often. Listening to Kitna here makes me feel good about the possibility of a more ambitious Prescott in 2019. https://t.co/YhBrUvFDyL

4. Strengthen the interior of the defensive line

The Cowboys did a great job finding Antwaun Woods as he played way beyond what anyone could’ve expected for a guy who didn’t play a single snap in 2017. Considering his cap hit was less than half a million, what a bargain he was. Woods gave the team a solid nose tackle and played well throughout the season, but the team needs to get stronger in the trenches. The team has passed on big-bodied defensive tackles in the draft for years and it’s the one area on defense where they still remain vulnerable. The Los Angeles Rams gashed the Cowboys as both Todd Gurley and C.J. Anderson had over 100 yards rushing. The Cowboys defense just couldn’t get off the field.

The three teams who released C.J. Anderson during the past calendar year all failed to make the playoffs. Just sayin’. #LARamspic.twitter.com/o13Lmm4tjN

5. Take the ball away

2014 was a great season as it will be remembered as the year the team finally broke the 8-8 curse that they had endured the previous three seasons. One of the reasons for the team’s success was that the Cowboys defense finished second in the league with 31 takeaways. The Rod Marinelli Effect rang true. But ever since then, the Cowboys haven’t been able to recapture the ability to take the ball away. After 31 takeaways in 2014, they only had 31 takeaways in 2015 and 2016 combined. And in each of the last two seasons the team has finished a very mediocre 16th in the league in takeaways.

The Cowboys defense has gotten better in recent years. They finished sixth in points allowed and seventh in yards allowed. It’s the first time they’ve finished in the top seven in both those categories since 2003 when Bill Parcells took over the team. But as good as they are, they can be even better if they were able to create turnovers.

The team does a great job of creating fumbles, but can’t seem to come away with interceptions. Dallas finished the year 27th in the league with just nine picks. Their Pro Bowl corner, Byron Jones, didn’t record a single interception.

The corners have been great in coverage, but if there is a knock on them, it’s that they regularly don’t get their head turned around to make a play on the ball. In the playoff game against the Los Angeles Rams, the defense got just one pressure on Jared Goff and it came on a blitz when Jaylon Smith got in his face as he released the ball. It caused the ball to float in the air and was there for the taking if Xavier Woods had just turned around. Instead he kept looking downfield and ran directly into Rams tight end….

This was the team’s one chance at a takeaway and they missed it.

Kris Richard has done a great job with the defensive backs this season. Unlike previous years, the team doesn’t have someone who’s a siting duck out there in coverage. But as good as they are, they need to make more plays on the ball.

Stay tuned tomorrow for five more things the Cowboys must do to make this squad a championship caliber team.