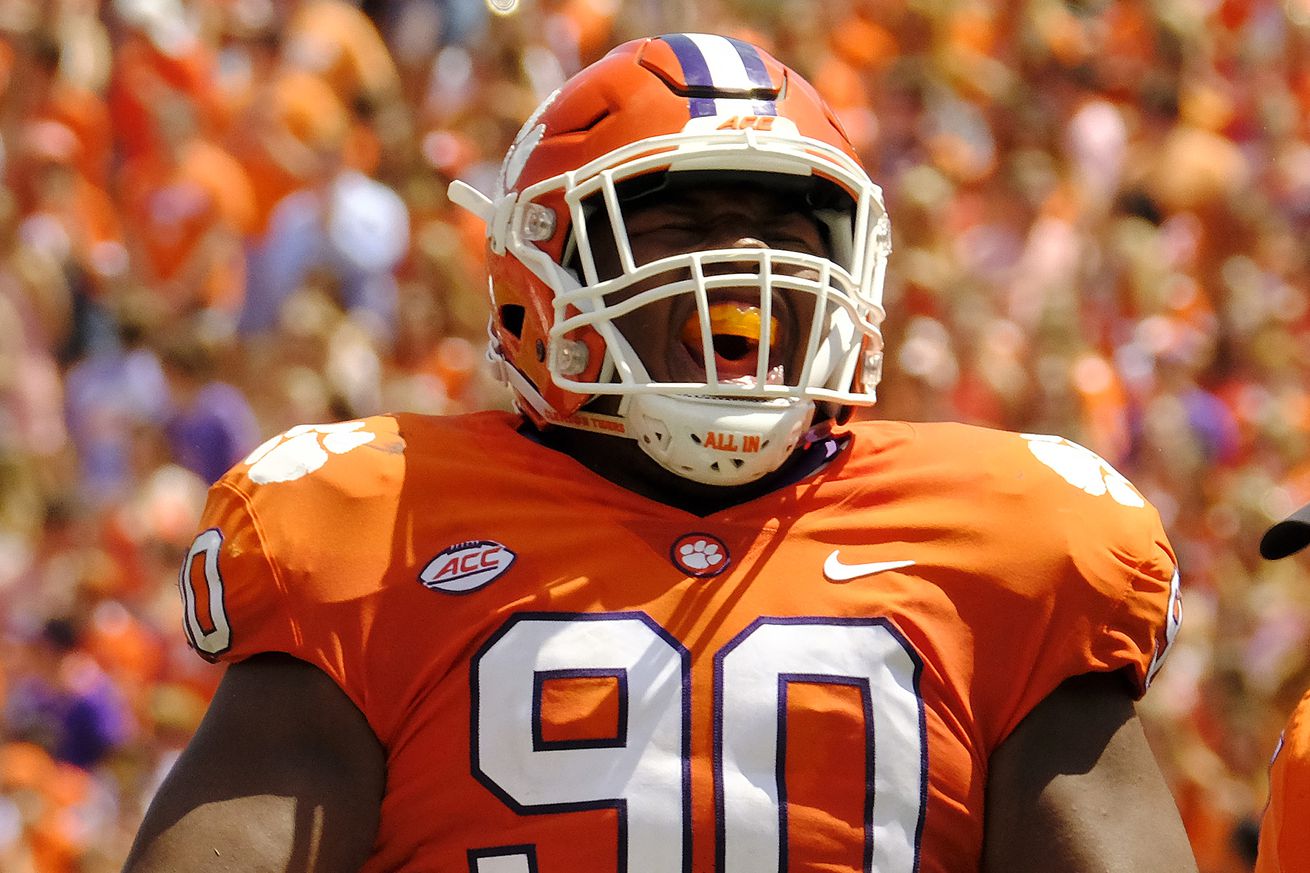 Here is your daily does of Cowboys news…

The Mothership takes a look at players under contract for next season and project what the future holds for them. In this piece, Maliek Collins takes the spotlight.

What’s Been Good: For the third straight season, Collins was a primary starter in the defensive tackle rotation. He started nine of 13 games and played just under half of the defense’s total season snaps. Working primarily alongside nose tackle Antwaun Woods, Collins ranked fourth on defense in pressures (20) and fifth in sacks (3). Overall the Cowboys fielded one of the league’s best run defenses and tied for the fourth-lowest yards allowed per carry (3.8).

What’s Been Bad: Collins has shown toughness dealing with injuries since Dallas drafted him in the third round back in 2016. For the second time in three years, he missed part of training camp following foot surgery. Then he missed three games in late September/early October with a sprained knee and popped up on the injury report at points throughout the season.

What’s Next: Collins is entering the final year of his rookie contract, but once again he’ll be an important part of what Dallas does up front on defense. The 23-year-old is an impact player when healthy, and the club could look to add more tackle depth to reduce wear and tear on him, Woods and captain Tyrone Crawford.

13 prospects who should blow up the 2019 NFL Scouting Combine- Gavino Borquez, Draft Wire

Who are some names to keep an ear out for entering the combine? Here are 13 prospects, including a defensive tackle we keep hearing about.

Wren entered the 2018 season not very well known by the general population. It was until he started to produce film, showcasing eye-popping first step quickness and burst off the snap to bully blockers. At the Senior Bowl, he displayed an absolutely stacked frame at 6-foot-4 and 315 pounds. Wren also posted phenomenal weight room numbers at Arizona State, squatting 600 pounds and bench-pressing 400.

In their latest mock, Drafttek has another defensive tackle falling to the Cowboys.

Gerald Willis displayed flashes at Miami: explosive first step, utilization of hands and power in swim move, relentless pursuit with straight-line speed to chase plays down from the back side, and physicality in his tackling technique. Areas that need improvement: staying low to play with leverage, consistency with hand placement, and mental recognition of blocking. Off-the-field issues led to a transfer from Florida and he took a year off in 2017 while at Miami. I don’t know if this will “Red Flag” him on the Dallas board, but if it does, I know the Cowboys visited with DT’s DeMarcus Christmas (Florida State) and Greg Gaines (Washington) during the Senior Bowl.

The Cowboys have rolled the dice in the second round before, but would they still consider doing that since it’s their first pick of the draft? What if a first-round talent at a position of need falls? Would Jerry be able to say no? Davenport examines some red-flag guys, including a talented DT the Cowboys could certainly use.

For most of his collegiate career, Clemson defensive tackle Dexter Lawrence was one of the more dominant interior linemen in the game. The 6’4”, 350-pound behemoth of a tackle didn’t post huge numbers in 2018 (37 tackles, 7.5 tackles for loss, 1.5 sacks). But big numbers aren’t Lawrence’s game—it’s tying up blockers so that others can make plays. Clogging lanes in the run game. Pushing the pocket back into a quarterback’s face.

But while most of Lawrence’s career went well, it didn’t end on the best of terms. As ESPN reported, Lawrence (along with two other players) was suspended for both of Clemson’s playoff games this past season after testing positive for ostarine, a banned substance that is not approved by the Food and Drug Administration and is not legally for sale in the United States. For his part, Lawrence insisted he would not take a banned substance knowingly.

“We get tested regularly, and we know not to do anything stupid or selfish like that,” Lawrence said last week. “That’s why this is such a shock.” In all likelihood, Lawrence is still going to be a first-round pick—especially if he shows well at the scouting combine. But in some respects, the recency of Lawrence’s failed test makes his situation that much worse than Grier’s. There hasn’t been a stretch of trouble-free time to mollify an NFL team’s misgivings.

The Cowboys have taken a defensive end within the first two rounds in three of the last five drafts. Would they dare entertain the idea of doing it again? One mock has them doing just that.

Oshane Ximines is a pass-rusher to be feared and was the only player this season to produce a 99.9 overall game grade. pic.twitter.com/XUsMea8vS6

But let’s not forget that Cowboys already have a young, developing edge rusher on the roster.

On the stat sheet, Dorance Armstrong didn’t contribute much during his rookie season. Only tallying 13 total tackles and 0.5 sacks, Armstrong certainly wasn’t putting himself in any Rookie of the Year talk with his play. But, he did prove worthy of a spot in the deep defensive end rotation the Cowboys were putting out there week in and week out. In fact, Armstrong played 273 snaps his rookie season, fourth-most amongst full time Cowboys’ defensive ends, and fifth when you include Tyrone Crawford in the list.

In his only start against Jacksonville, Armstrong showed some promise, filling in for his injured teammates. To be honest, it could be argued this former fourth rounder has shown more reason for hope and optimism in limited opportunities and during the preseason (and with his traits) than the former first round pick Taco Charlton has. Especially when you consider how Charlton’s “mentality” has been questioned by the coaching staff, as he earned healthy scratches mid-season.

Here are five players who need more opportunities, including that Armstrong fella who still offers a lot of upside.

There was a collective sigh of frustration among Cowboys nation when the team took defensive end Taco Charlton with the No. 28 overall in the 2018 NFL Draft while more promising players such as T.J. Watt still sat on the board waiting to be selected. Fast forward to now and Charlton is still struggling to win fans over and even had the coaches turn on him during this season.

While there’s still a chance for him to become a productive member of the team, it would benefit the Cowboys to find another option as well. The best candidate for that would be Dorance Armstrong, who was a fourth-round pick out of Kansas in 2018. While he didn’t contribute much as a rookie — 13 tackles and a half sack in 15 games — Armstrong does have a lot of upside. He showed great burst off the snap and incredible bend and agility around the edge while playing for the Jayhawks and flashed some of that potential in the preseason.

Now with a full season under his belt, Armstrong is deserving of more snaps in 2019 as he can offer a solid rotational piece on the edge along with Randy Gregory and Charlton.

Could a deep tight end draft class cause the value of free agents to drop? If so, that could open the door for the Cowboys to find one at a reasonable cost.

Tyler Eifert is a player Jason Garrett has coveted dating back to the 2013 NFL Draft. But when Eifert went off the board at Pick 21, the dream of snagging the next great Dallas tight end appeared lost. But the 28-year-old is hitting the market this year, and after another injury-shortened season, he’s likely to come at a very reasonable price (probably half of what he earned last season which was $5.5M).

The former Pro Bowler has major upside and very limited cost making for a perfect gamble. Additionally, Dallas likes what they have in Dalton Schultz and Blake Jarwin, and wouldn’t be losing any sleep should injury befall Tyler once more. Signing him early would also allow them to gamble a little more on Day 3 of the draft as they wait for a nice prospect with tremendous value to slip through the cracks and fall into their laps.

Free agency is just over a month away, but who will the Cowboys realistically target?

Eifert could have been the selection for Dallas in 2013, but the pick was traded away as the Cowboys traded down and nabbed Travis Frederick. Eifert’s extensive injury history is well documented as his ankle, knee and back woes have resulted in him playing in just 14 games over the past three seasons. He still is relatively young at 28, so if they are comfortable with some finger-crossing, this is a move that could address an issue and free up some wiggle room in the April draft where they would not be forced to draft at the position. As an added tidbit, he is Zack Martin’s former college roommate and more recently brother-in-law. That could lead to some in-house lobbying for his signing.

The Cowboys have a need for speed, or at least that’s what it looks like after they just signed a couple speedy receivers to future contracts. Terence Watson has his own theory about these signings.

During his time at Georgia, Davis caught 38 passes for 618 yards and two touchdowns but the stat that really stands out is his 16.3 yards per catch average. That’s better than Cowboy receivers Cole Beasley (10.3) and Amari Cooper (13.4) had this season. Smith came into the NFL with the Jets but wasn’t able to get anything going after two ACL tears.

Pro Football Focus takes a stroll around the league and gathers a “wish list” for what they would like each team to do in terms of fantasy purposes. But nothing is more powerful than the Amari-effect.

“It was a tale of two seasons” is one of the most overused writerly devices, but if it ever applied to a franchise, it did to the 2018 Cowboys. The team went into its Week 8 bye at 3-4, averaging 20 points a game and with no back-to-back wins all season. The conversation was more about when Jason Garrett would lose his job than whether the Cowboys would make the playoffs.

And then the trade for Amari Cooper happened, and whether it’s correlation or causation, the season flipped. For the nine weeks after the bye, the Cowboys went 7-2, took over first place in the NFC East, and made the Divisional Round of the playoffs. Cooper was the No. 8 fantasy receiver over that stretch, while Dak Prescott was the No. 4 quarterback, Ezekiel Elliott the No. 2 running back.