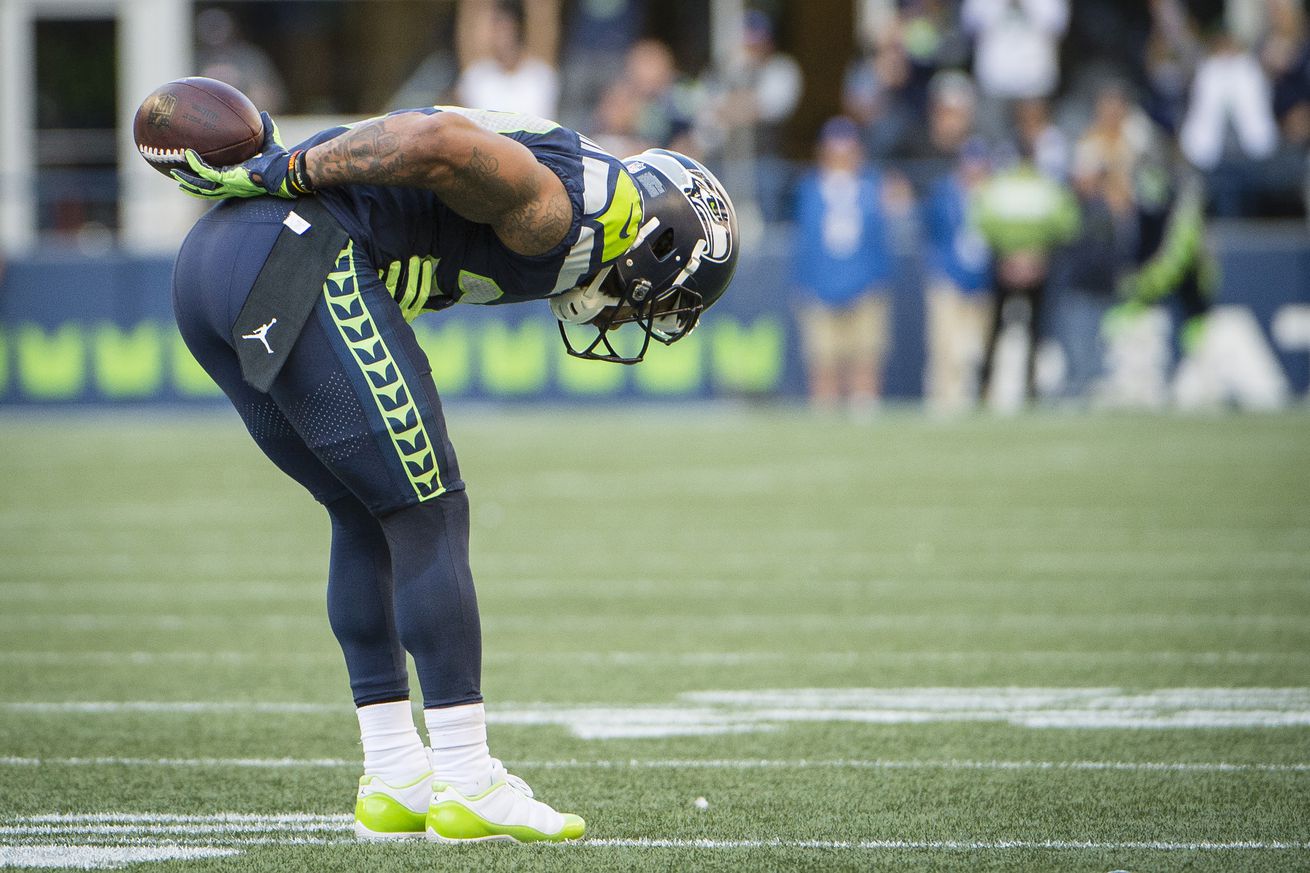 Earl Thomas has never stopped wanting to be a Cowboy and he got the conversation started once again on social media.

The safety shared a clip from the NFL Network, with the crew discussing the possible situations for Thomas who is unlikely to return to Seattle.

This is a fun time for me I’m embracing this process and waiting with anticipation . #FreeAgency #cantchangehistory

With him sharing this video on his social page it appears to be a blatant endorsement from Thomas of the idea of him hoping to go to Dallas in free agency. Though this video will get fans talking there likely won’t be anything more than rumors until March 13th, the official start of NFL free agency.

Earl Thomas to the Cowboys — why or why not???

I would sign Earl Thomas if Kris Richard said do it. He clearly knows the scheme and can help the Cowboys with takeaways. The Cowboys’ defensive backs just don’t make a lot of interceptions. Safety Xavier Woods tied rookie linebacker Leighton Vander Esch with two picks. Pro Bowl cornerback Byron Jones didn’t have a pick last year. The Cowboys’ other starting corner, Chido Awuzie, had one. Folks, Earl Thomas had two picks against the Cowboys in the game he faced them last season. He only played in four games last season and made three picks, which means he would have led the Cowboys in interceptions. Yeah, I would make a run at Thomas if I were Jerry Jones.

Free Agency Fits: Earl Thomas to Cowboys? – Gil Brandt, NFL.com
Should Earl Thomas be suiting up for the Dallas Cowboys next season? Soon-to-be Hall of Famer, Gil Brandt identifies why it makes sense for his former team.

It will be interesting to see if Thomas, coming off an acrimonious end to his 2018 season brought about by a leg fracture in October, lands the kind of contract he’s been angling for since last season, given the troublesome market that faced safeties last year. The Cowboys’ defense stood out in 2018, ranking seventh overall and 13th against the pass, but this unit could absolutely use the addition of an experienced voice in the secondary. The 29-year-old Thomas might not be at his physical peak anymore, but I could easily see him filling a role similar to what Eric Weddle did in recent years for the Ravens, ensuring everyone is lined up correctly and providing a boost of veteran savvy in the back end. The fit only looks more attractive when you consider it would reunite Thomas with former Seahawks defensive coordinator Kris Richard. And who could forget Thomas telling the Cowboys to come get him back in 2017, or Dallas’ previous attempts to trade for him?

The Earl Thomas to Dallas speculation is alive and well once more – RJ Ochoa, Blogging The Boys
The story lives on, Earl Thomas and Dallas are dancing again.

One of the biggest things to not happen to the Dallas Cowboys over the last few years is unquestionably acquiring Earl Thomas in a trade with the Seattle Seahawks.

This isn’t to say that the Cowboys didn’t try to land the former Texas Longhorn as talks between them and the Pacific Northwest happened a lot last season. Fast forward a year and Earl Thomas is set to be a free agent so his visiting Jason Garrett on Christmas Eve 2017 is a bread crumb that could actually lead to a final trail once and for all.

It’s easy to connect Thomas to the Cowboys this free agency season because, well, they’ve been eyeing each other for a long time. On Tuesday’s episode of NFL Total Access, Willie McGinest took the great leap of matching the two together when discussing where certain soon-to-be free agents could wind up. What’s more is that Thomas himself shared the segment on his own Instagram profile.

Next Step: LB Sean Lee wants to continue NFL career, does he have a role in Dallas? – Nick Eatman, Dallas Cowboys
The Cowboys got younger, faster, and better at linebacker with the duo of Jaylon Smith and Leighton Vander Esch. Has this team passed Sean Lee by?

Obviously the Lee decision is a big one for the Cowboys, but it’s not the only one they need to make there. Strong side linebacker Damien Wilson is one of the team’s unrestricted free agents. He finished 10th on the team in tackles with 36and he was seventh on the team in special tams tackles with six. He might be a player that gets to test the market in mid-March but that won’t necessarily mean they close the door on his return. A lot of that might depend on the Cowboys’ comfort level with the development of Chris Covington, a sixth-round pick last season.

Will the Cowboys cut LB Sean Lee this offseason? – Clarence Hill, Fort Worth Star-Telegram
For a while, the Cowboys defense was lost without Sean Lee but that is no longer the case.

Now the Dallas Cowboys must decide whether to cut the nine-year veteran or bring him back at a reduced salary. Lee, 33, certainly won’t return at his $7 million salary for 2019.

The bigger question is what salary can you justify at all to bring back an aging and oft-injured player who has not been on the field for five consecutive games since 2016 and has never played a full season since being taken in the second round in 2010. He missed nine games in 2018 and six games in 2017 primarily because of hamstring injuries, despite following a plan to try to keep him as healthy as possible. Why would it be any different in 2019?

More pointedly, the former Pro Bowler is no more than a backup in Dallas to rising young linebackers Jaylon Smith and Leighton Vander Esch. He played just 7, 22, 4 and 21 snaps in the final four games for the Cowboys after returning from injury last season, including the two playoff games.

Cole Beasley IS a free agent who may have burned his bridges in Dallas by criticizing the front office early this offseason. Tavon Austin is also a free agent and could draw decent interest given the rising popularity of jet sweeps. Finding another Beasley, who had the body control and understanding of defensive leverage to consistently separate underneath, is critical to continue the development of quarterback Dak Prescott.

We would be talking about how the Cowboys are in bad shape at wide receiver if the front office didn’t get ahead of that problem and trade for Amari Cooper midway through the 2018 season. People are already preparing for the departure of Cole Beasley and that’s probably a realistic expectation so the team could be looking his replacement.

Potential Cowboys draft target Penny Hart on how he’d mesh with Cowboys: ‘I think I would be a great fit’ – Scott Bell, SportsDay
Is the Cowboys’ most pressing need finding a replacement for free agent-to-be Cole Beasley. If so, Penny Hart will check a lot of boxes.

Hart had a pair of 1,000-plus yard seasons at Georgia State in 2015 and 2017. He’s been labeled as a great fit for the Cowboys in the event that Cole Beasley leaves this offseason by multiple analysts. That analysis hasn’t fallen on deaf ears.

”I think I would be a great fit,” Hart said. “Being able to complement Dak and Zeke and Amari Cooper. It’s such an amazing organization. Everybody has always wanted to play for America’s Team, so that would be amazing if that happened.”

“Jon is poised. Jon is real. Jon is authentic,” Witten said at the 2nd annual Jason Witten Collegiate Man of the Year Award Ceremony Tuesday night at The Star in Frisco.

Witten said he called Kitna one of his favorite backup quarterbacks and believes he will get his point across in a positive way for Prescott.

“He is all in. He is connected,” Witten said. “I think Dak is the quarterback here for the long term. I think one of the best things about Jon is he communicates with guys. He not far removed from it. I think he will do a really good job of doing it in an authentic way that players appreciate and connect with.”

Is @dak worth the he’s going to get?@Nate13Burleson says take a look at the #⃣s and pay the man. pic.twitter.com/oolgWXwebq