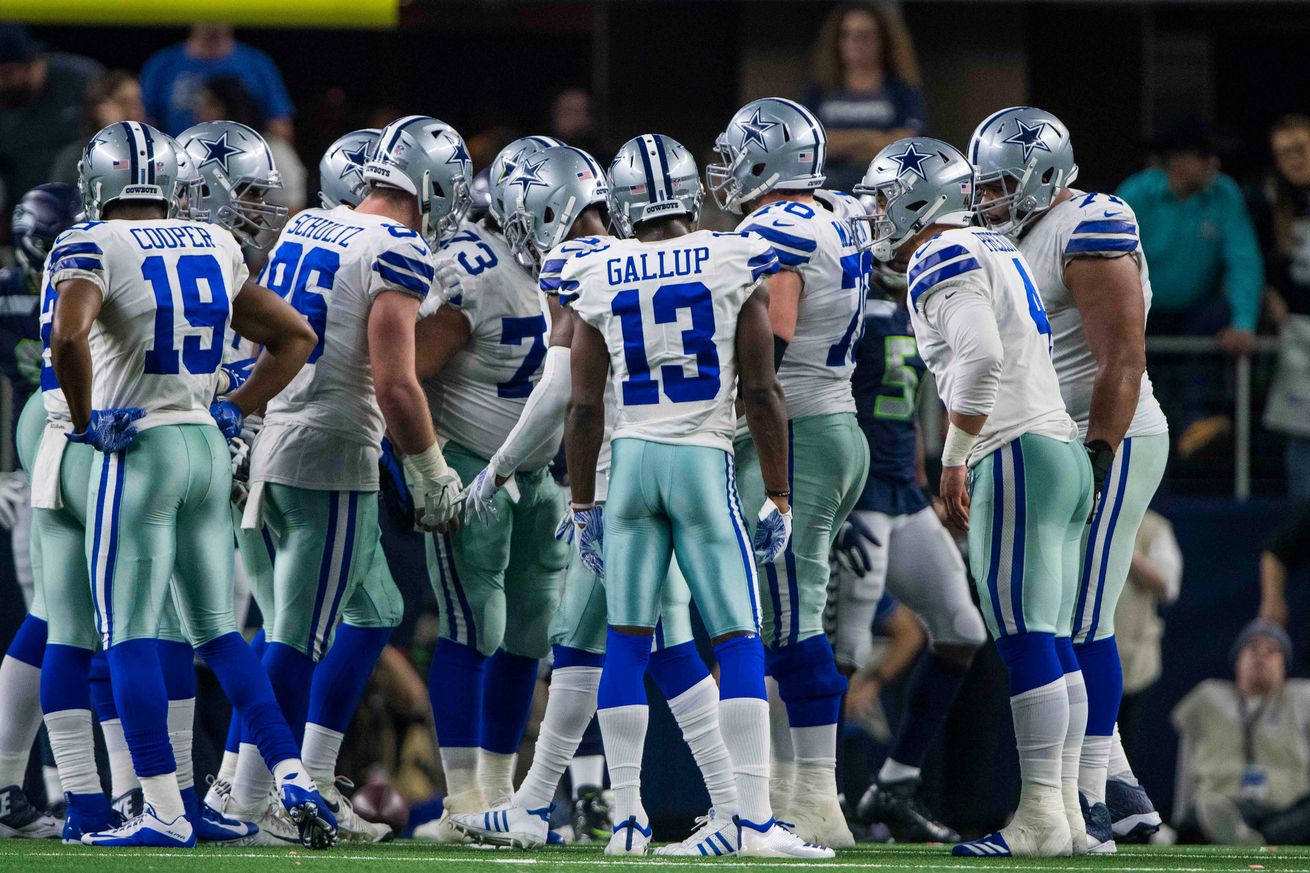 Do the Cowboys have enough talent on the roster to be an elite offense? – Matt Mosley, SportsDay

Mosley believes the 2019 Cowboys should have a formidable offense.

Q: Do the Cowboys have enough talent on the roster to be an elite offense like they aspire to be?

Mosley: Scott Linehan has been thrown overboard in favor of Jason Garrett and Kellen Moore. I don’t see that pair immediately turning this into the Chiefs or (non-Super Bowl) Rams. It will help a lot to get Travis Frederick back at center. Amari Cooper should only get better in this offense. And the hope is that Zeke Elliott continues to be one of the elite backs in the game. I think they look way more formidable heading into next season. And that’s before adding anyone in the draft. I’d like to see how Michael Gallup continues to make progress. Can he emerge as a strong No. 2 WR? And where does Cole Beasley fit into this? Will the Cowboys try to find a skilled TE in this draft, or do they believe that Blake Jarwin has turned the corner?

What can the Cowboys do to improve the offense further? The Mothership breaks down each position on the team and examines what the Cowboys need to do to take the next step. On this week’s agenda – the wide receiver position.

As it stands right now, this is a unit that could use some depth. Cooper is the undoubted centerpiece of the group, and Gallup is a promising young talent to pair with him. After that, there’s an awful lot of unknowns. Beasley and Austin are free agents. Allen Hurns didn’t have as large of a role as many anticipated, but had some nice moments in 2018. Unfortunately, he suffered a gruesome leg injury in the wildcard win against the Seahawks, and it remains to be seen how quickly he’ll recover.

Terrance Williams hasn’t been heard from since he went to injured reserve in the first month of the season. After that, the young trio of Noah Brown, Lance Lenoir and Cedrick Wilson have combined for just nine NFL catches – all of which belong to Brown. Something needs to be done. That could mean free agency, whether it’s Beasley, Austin or an outside option, or it could mean a draft pick. One way or another, it’d probably be a good idea to add another option to this receiver corps.

While we ponder about the future of the wide receiver position, let’s take a moment to relish the past.

The @dallascowboys won the game off an @AmariCooper9 TD in OT! Watch the re-air of this NFC East rivalry clash at 2pm ET on NFL Network! pic.twitter.com/fhahyjM8xN

Over the past couple weeks, NFL.com rolled out division-by-division grades for the 2018 draft class. In the final ranking, the Cowboys finished with the ninth-best grade – and second-best among teams picking 19th or lower.

Dallas found the present and future of the linebacker position, and it came from Riggins, Idaho. An easy pick for the PFWA All-Rookie Team, Vander Esch stepped in for the oft-injured Sean Lee and finished third in the league in tackles, earning Pro Bowl honors as a replacement for Luke Kuechly. With sideline-to-sideline speed and instinctual ferocity that few young ‘backers possess coming out of college, Vander Esch solidified an LB duo alongside Jaylon Smith that is sure to be among the league’s best for the next half-decade at least. Behind LVE, Dallas hit on Gallup, who should be assured a starting role across from Amari Cooper next season. Williams shared the left guard spot with Xavier Su’a-Filo to mixed results. Schultz should compete for Dallas’ starting tight end spot next season if the club doesn’t seek a veteran in free agency.

Bleacher Report takes a look at players from each team who could be more valuable to another team in the league. Who did they choose for the Cowboys as a top trade candidate?

Anthony Brown, CB: Nobody’s spending $7 million to bring in old, injury-prone Sean Lee for a walk year, so the Dallas Cowboys will have to either keep or cut the soon-to-be 33-year-old two-time Pro Bowl linebacker. Instead, Dallas could look to explore the trade market for nickel cornerback Anthony Brown. Brown is also entering a contract year, but the Cowboys can basically part ways free of charge, while his next team would only be on the hook for a little more than $2 million. Not bad for a 25-year-old with 30 career starts under his belt and a ceiling that remains relatively high. And with Dallas already possessing Byron Jones, Chidobe Awuzie and Jourdan Lewis at that position, the Cowboys can afford to cut ties and venture into the free-agent market and/or draft with plenty of money to spend.

5 free agents the Cowboys could target at QB: There’s a slim chance Dallas might shock us by signing a backup QB – Tyler Dragon, SportsDay

It doesn’t seem like that long ago when Alfred Morris and Robert Griffin III were leading the Redskins to victory over the Cowboys in the season finale that determined the division winner. The Cowboys have already used Morris for depth of their roster, would they dare grab RG3 as well?

Robert Griffin III, Ravens (6-2, 213): Griffin hasn’t been the same since he sustained a career-derailing right knee injury on Jan. 6, 2013. Since then, he’s battled through various lower and upper body injuries that have overshadowed what was a breakout rookie season in 2012. Knee, ankle and shoulder ailments have taken a toll on the former Heisman Trophy winner, but he’s still a capable backup. Griffin’s compiled 9,004 passing yards, 42 passing touchdowns and 26 interceptions in 45 career games. On the ground, he’s accumulated 1,670 yards and 10 touchdowns.

Could the end be near for these three Cowboys?

Sean Lee, LB, Dallas Cowboys: It’s been a great run. Lee wants to return to the Cowboys in 2019 — and perhaps the two sides can work out a pay cut — but he doesn’t have much of a role if Jaylon Smith and Leighton Vander Esch are healthy. Dallas owner Jerry Jones can get sentimental about longtime Cowboys, but carrying Lee with a cap figure over $10 million is going too far.

Allen Hurns and Terrance Williams, WR, Dallas Cowboys: Amari Cooper has rendered most of his predecessors in Dallas extraneous.

The Cowboys could probably re-sign David Irving for a ham sandwich, but will they?

He has played in 10 of the past 32 games because of suspension or injury. As talented as he is — he has eight sacks in those 10 games — he’s unreliable. He entered 2018 with a four-game suspension for violating the substance abuse policy and needed a big season in a contract year. He suffered a high ankle sprain in practice in November and never returned. He was not around the facility much as he dealt with off-field personal issues and was not diligent with his rehab. When he worked out for Jerry Jones and the front office late in the season, he was out of shape. Jones loves a good deal, and he could get Irving back for next to nothing, but if the Cowboys want the “right kind of guy” around, they need to let Irving become another team’s problem.

One AFC general manager doesn’t like the idea of drafting 1-tecnique early.

“It’s nothing against [Clemson DT Dexter Lawrence], but teams should know better than to draft a nose tackle early. He’s Vita Vea. He’s Danny Shelton. These guys are never worth the early pick.” — AFC general manager

The Cowboys don’t use their top draft pick for defensive tackles, but could that change if that top pick is in round two? Sturm provides a scouting report of some of the draft’s top interior defensive linemen.

Positives: The best part of Jones’ game started to emerge in 2018, as he made 21.5 splash plays in 14 games after just 10 in his first 21 games. This uptick tells us — especially with Nick Bosa missing most of the season — that he had raised his game to a new level. That’s easy to see, as he’s an under tackle with really strong hand usage and a fine motor to boot. It doesn’t take him long to dispose of a guard in space, which is the top goal of any 3-technique (lined up on the outside shoulder of the guard where his man cannot really get much help). He rushes the passer uncommonly well for an interior player and he also seems to keep his gas tank full enough as the game approaches the late stages. He stays on his feet and is nimble enough to make you think that his ceiling could be even higher, considering he took such a stride from 2017 to 2018.

2019 NFL Scouting Combine: One player for each team to watch – NFL.com

Daniel Jeremiah and Lance Zierlein list one prospect for each NFL team to track at the combine, and like a potential 3-technique for the Cowboys.

L.J. Collier, DL, TCU. The Cowboys need pass rush. Actually, they just need help along the defensive line. During his time in Chicago, defensive coordinator Rod Marinelli helped transition Henry Melton from DE to DT and reaped the benefits. Collier is shooting up draft boards, and, with the prospect at 280 pounds, the Cowboys might see the same transition as a possibility.

K.D. has the Cowboys trading away their top draft pick in order to acquire more draft capital in his latest mock draft.

The Patriots see the player they covet and throw Dallas the first complimentary, err compensatory pick of the mock draft, pick No. 97.

No. 64: 3T Khalen Saunders, Northern Illinois. Saunders checks in with a 1.70 production ratio. Anything above 1.5 is elite.

The Draft Network provides a complete seven-round mock draft for the Cowboys. They have them taking a safety with their top draft resource.

Dallas will be looking for an answer next to free safety Xavier Woods, and could address the position in free agency. If they don’t, they’re likely to look at Rapp with their second round pick. With a distributed frame, range and open-field tackling, Rapp would fit perfectly into the Cowboys secondary. His ability to play near the box and in man coverage on tight ends would be an ideal fit in the Jeff Heath role.

Not as lengthy, but he reminds me a lot of Harrison Smith coming out of Notre Dame. pic.twitter.com/cNhemf15rg