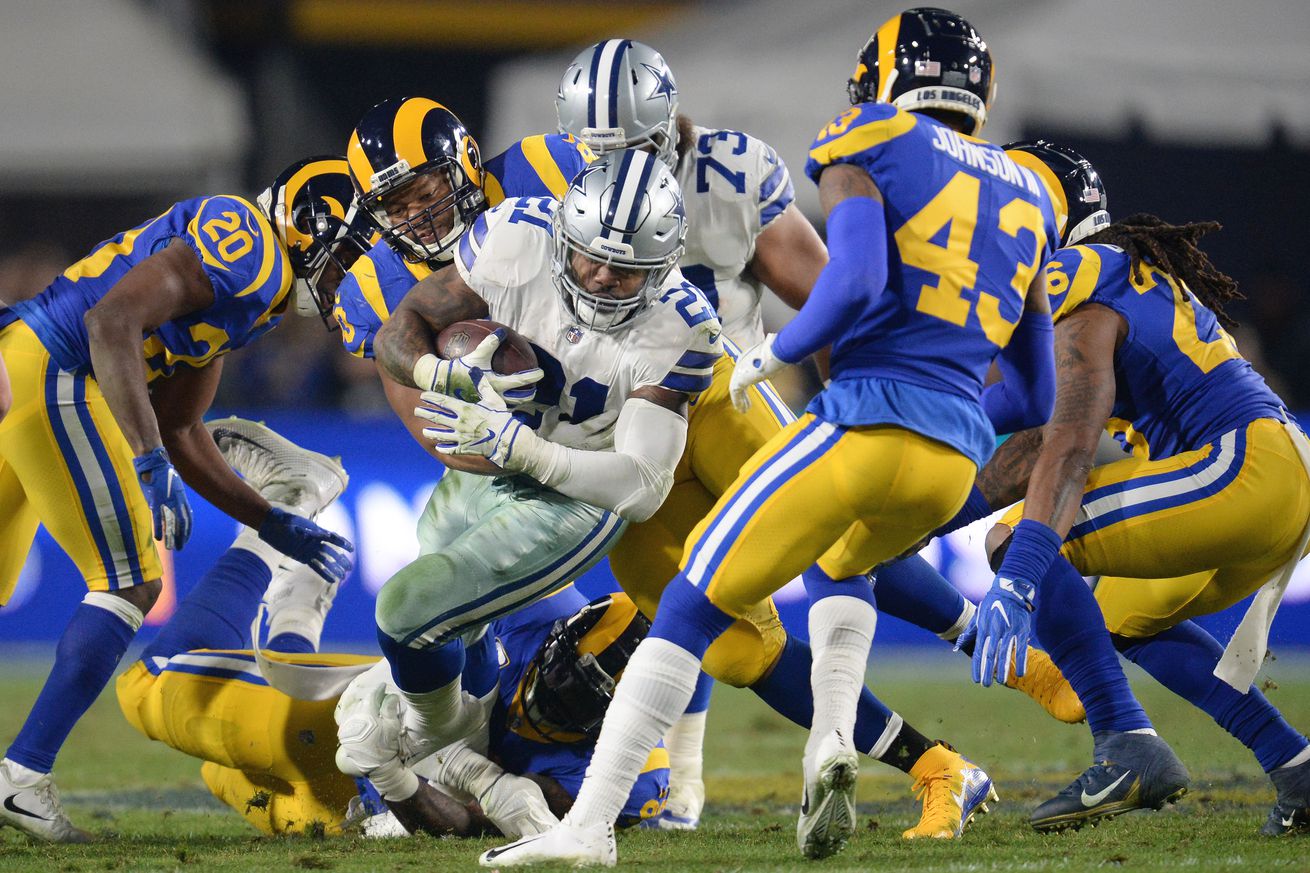 It was only one play in a long season, but the symbolism was real.

4th-and-1 at the Rams 35-yard line during the Divisional Round playoff game. The score was 23-15, with the Rams leading, and it was the first play of the fourth quarter. Dallas finally had some momentum as they were driving the ball on the Rams. Now, they faced a 4th-and-1.

This situation was no longer a “gimme” for the Dallas offense. The Cowboys offensive line was no longer capable of simply blowing opponents off the ball and allowing Ezekiel Elliott easy access to a few yards. With no Travis Frederick, with a rookie who had trouble at the point of attack in Connor Williams, and with a dinged up Zack Martin, the Cowboys interior line was at a disadvantage against a Rams front that was pretty darn good. We’ll let David Moore tell us what happened.

Did the Cowboys rise to the occasion on this fourth-and-1?

No. They plunged Ezekiel Elliott into the teeth of the Rams defense. He was stopped for no gain. LA took over and went on a 65-yard scoring drive to ice the outcome.

This play epitomizes a lack of creativity that frustrates critics inside and outside the organization.

If your talent is superior to your opponent, by all means line up and beat them physically. Impose your will. Make the game about simple execution.

But talent is so evenly dispersed in the NFL, how many teams can truly thrive with that bedrock philosophy? Rather than telling a player to beat the man across from him, why not draw up something schematically to help him do it?

That play has been referenced hundreds of times now to symbolize a Cowboys offense that failed all too often in 2018. It was used as the final nail in the coffin for Scott Linehan by many. So let’s take a look at that play and how it helps to illustrate the Cowboys dysfunction on offense.

It’s been noted how the Rams use pre-snap motion to confuse defenses and get them out of position. The Cowboys seemingly do the opposite here when they motion TE Rico Gathers out of the backfield to the end of the line of scrimmage. It’s a run play and it is designed to go to the right behind Zack Martin and La’el Collins, this pre-snap motion just brings more defenders to that side of the line.

Dallas follows that up by bringing blocking WR Noah Brown in from the outside to line up just behind the TE tandem of Gathers and Dalton Schultz on the right side. There is no subterfuge here, this is just lining up and powering forward. Creativity is right out the window.

My kingdom for Travis Frederick

Joe Looney did a great job of filling in for Travis Frederick all year. He played better than anybody thought he would. Still, there were times when Fredrick was missed and this was one of them. That red circle is Looney being pushed back by Ndamukong Suh.

This is a better view from the endzone angle. It looks like Elliott will be able to cut inside Suh through the hole between Looney and Martin. But Suh is in total control of Looney and sees Elliott head for that hole. He easily crosses over Looney and smacks Elliott, stopping all momentum. From that point on the run is essentially dead although Elliott gives it his all.

There’s been much said about the Cowboys lining up in this tight formation and running the ball up the middle. The theory being – why not spread the defense out and then let Elliott do his thing? But if we look at the play, in hindsight of course, there are creative things the Cowboys could have done from this formation.

They have a one-on-one with Amari Cooper at the bottom of the screen. They could have run Cooper on a quick slant (black arrow) and Dak Prescott could have dropped a step and fired. There is no linebacker in the path of the ball (blue circle) so it would have all been on the Rams corner to make the play.

Or, even better, the Cowboys have three eligible receivers on the right side of the line (Brown, plus two tight ends). If they wanted they could have run play-action, you can see how the corner on that side is starting to charge the line (red circle/arrow), and then released a couple of receivers into the zone on that side after faking a block for a second (yellow arrows). The Rams just don’t have enough players over there in position to make a play.

Yes, this is all easy to say after the play, but the Cowboys could have had these audibles ready to call if they saw the Rams in this formation. It’s called creativity.

Another playoff play, another blown call

There was the Dez Bryant catch in Green Bay. Refs blew that one. Then there was the missed blatant holding of David Irving by the Packers line when Jared Cook caught the pass that set up the game-winning field goal. The refs blew that. And then there is this play. Look at the red circle/arrow. Is there any more blatant occurrence of hands to the face than this? Ethan Westbrooks is about to push Connor Williams’ head off his shoulders by pushing up on his facemask. No call.

The Cowboys offense limped along all season. There was plenty of blame to go around. This play sort of symbolized much of it. Pre-snap movement that telegraphed the play. Instead of scheming around the defense, they plowed into the teeth of the defense. No creativity in going against tendency and attacking the weakness of the defensive formation. Players unable to make the key play or block when needed. And since it was a crucial play in the playoffs, we get a blown call by the refs.

Plays like this cost Scott Linehan his job. If they continue, they will cost Jason Garrett his job. Kellen Moore is charged with changing it, let’s hope he is up to the task.