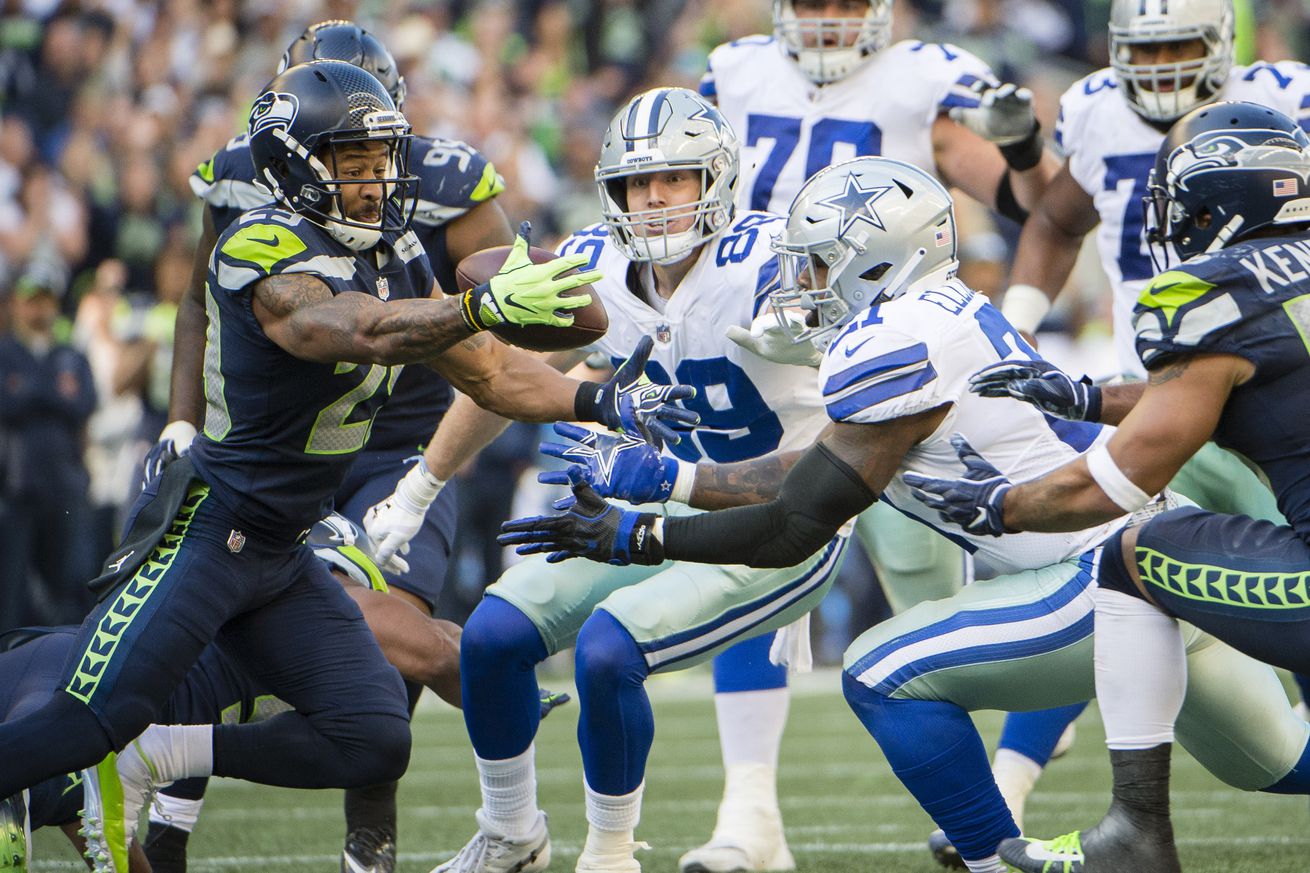 Plus a recent roster move could open the way for a high risk/high ceiling draft pick.

Earl Thomas wants to play for the Cowboys and the feeling is mutual. But here’s why it’s complicated – Calvin Watkins, The Athletic
They aren’t the most popular of things, but here is another dose of reality in the Dallas Cowboys’ pursuit of Earl Thomas.

A source close to Thomas said there is a strong market for him from several NFL teams. But his age (29) and injury history are causes for concern. Thomas’ injury should require three to four months of recovery; given that timeframe, he should be good for Week 1.

His contract demands last year, before suffering his injury, were high. He wants to become the highest-paid safety in the game, a position he held briefly until the Chiefs’ Eric Berry signed a six-year, $78 million deal in 2017. In nine seasons, Thomas has 28 interceptions and has been named to six Pro Bowls. Thomas is a box safety who makes plays on the ball; ask Dak Prescott about him, he was picked off twice by Thomas last season.

Thomas wants to play for the Cowboys. The team is interested, but not to the degree most assume.

Source: Cowboys begin in-house evaluation of Earl Thomas pursuit – Mike Fisher, 247 Sports
But the Earl Thomas story isn’t dead. As a matter of fact, it is just starting to heat back up.

Sources close to the situation tell me that Dallas’ view of the player is unchanged, even after missing all of last season in a Seattle contract dispute, even after sustained a season-ending injury during the season, even after turning 30.

In short: The Cowboys, at a reasonable price, want Earl Thomas.

The in-house discussions center on a) how much they want him in terms of dollars and sense and b) eventually, how to make the presentation in the best way to convince him to join his favorite boyhood team, the Cowboys.

Cowboys owner Jones won’t confirm that – and can’t, as the NFL free agency window doesn’t open until until March 13 at 3 pm CT. But in addition to indications from sources, the signs suggesting a serious flirtation are everywhere.

We will put up with you until we can replace you.

Before taking a peek at the future, let’s review: Only last year, the Cowboys acted as accomplices in Irving’s not-so-excellent adventure. Gave him $2.91 million, which came to $727,500 per tackle. It’d have been cheaper to call in an occasional air strike.

From what sources tell our David Moore, the Cowboys have determined they can live without Irving’s drama from here on out. Same with Terrance Williams, their resident Evel Knievel.

Neither Irving nor Williams made an impact on the Cowboys last season. But instead of waiting on them to get their minds right, the Cowboys are moving on for various reasons, not the least of them financial.

Dallas Cowboys: Film room: Meet the top-15 talent who could fall to the Cowboys in Round 2 of the NFL draft | John Owning, SportsDay
Could this injured star with an off-field incident (from high school) become a replacement for Irving and a new version of Randy Gregory for Dallas?

Unfortunately, Simmons’ skill on the field is the easiest part of his evaluation. An incident in March 2016, before he ever played a game in Starkville, ended with Simmons being found guilty of malicious mischief while pleading no contest for simple assault. A video was made public of Simmons punching a woman. A senior in high school at the time, Simmons was reportedly trying to break up a fight between his sister and another woman when he “used physical force against one of those involved in the altercation.”

It appears Simmons made the most of his second chance, avoiding another incident after enrolling at Mississippi State and actually winning the school’s Newsom Award — given to him for his work on the field, in the community and the classroom.

When a top prospect’s stock falls, it’s usually because he either had off-field or injury concerns. Simmons is dealing with both, having torn the ACL in his left knee earlier this month, an injury that will likely force him to start the season on the PUP (physically unable to perform) list with a chance he doesn’t suit up at all in 2019.

While Simmons is the type of talent that could have endured either off-field or injury concerns and still landed in the first round, it seems incredibly unlikely a team owner would sign off on drafting a player in the first round who is dealing with both.

He’s just always so active, whether it’s pressuring the quarterback (He ranked third on the team with 25) or getting sacks. Crawford finished with 5.5 despite missing the final two games of the regular season. He moves back and forth from end to tackle and has done throughout most of his career. Having him on the team, especially with all of the injuries that occurred on the D-line, is such a value because he provides depth at two spots.

Jerry: Cowboys & Garrett are ‘happy where we are’ contractually – Mike Fisher, 247 Sports
With Jerry Jones, you never know when he is calling it like it is, or painting an overly-rosy picture. We’ll see how this one holds up.

We can use phrases like “lame-duck coach” and we can paint a picture of distrust, disharmony and coming change. But as it regards owner Jerry Jones and his decision to have his Dallas Cowboys coached by Jason Garrett next season without the benefit of an extension and therefore without the guarantee of a future, Jerry sees no problem — and claims that Jason sees no problem, either.

“I am and Jason is, we’re both happy with where we are,” Jones said Tuesday during a boxing promotional event at AT&T Stadium. “We’ve done this before. We both have real trust in each other, a little more unique than normal.”

The Joneses and Garrett — a long-time Cowboys fixture as a player, assistant coach and head coach and often thought of as almost an extension of the Jones family — have indeed gone down a similar road previously … and with positive results.

Cowboys add Adam Kleffner as assistant offensive line coach, will help Marc Colombo – David Howman, Blogging The Boys
The headline is about the hiring of a new assistant for Colombo, but look at the two names buried down at the end of the story. The Cowboys continue to grow their own.

Kleffner will directly work with Marc Colombo, who became the offensive line coach midway through the 2018 season after Paul Alexander was fired during the Cowboys’ bye week. The 2019 season will be Colombo’s first full season as an offensive line coach.

The NFL’s franchise tag is a scam. It’s time to kill it – Adam Stites, SBNation.com
There is nothing like the NFL franchise tag, well, anywhere else in the world. It is being discussed for the Cowboys to use on DeMarcus Lawrence, but this makes the argument it should be put to rest in the next CBA.

Is there even a logical argument for franchise tag to stay at this point? If an elite player doesn’t get a contract extension from the team that drafted them, that’s the team’s problem. It got four or five years of excellent play and it’ll get a compensatory draft pick for that player’s departure.

Are we really supposed to feel sorry for the Steelers (valued at over $2.5 billion, mind you) for only getting four or five years of elite play from Bell, because they chose to offer him a contract of funny money with little actual guarantees?

Tony Romo Says Kids Can Play Tackle Football | 105.3 The Fan staff
You can tell Tony Romo has really hit the big time, because he was on Dr. Phil.

Romo, who has three sons (Hawkins, Rivers and Jones), was asked if he’d let his boys play the game that made him a star during a sit-down with Dr. Phil.

“I don’t think I’ll ever discourage them from doing anything. Like to me, it goes back to what you said, ‘if you really like this go play it,'” Romo said. “What I won’t allow them, from my dad perspective, if everything’s the same as it is 10 years from now … they won’t play tackle football until 8th grade. That’ll be the first time we’ll let them (play).”