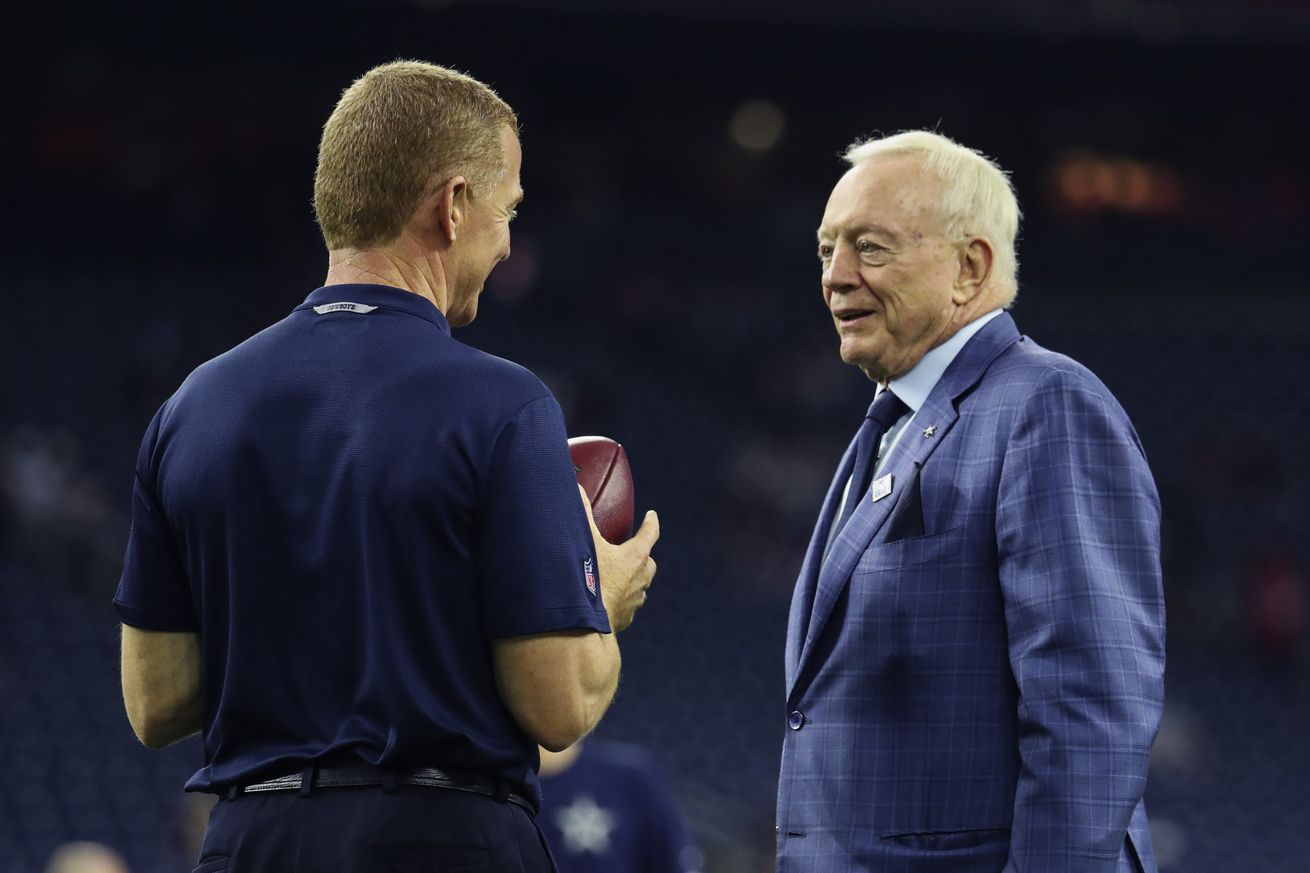 General manager Jerry Jones is balancing the future against the present in roster-building.

As free agency creeps ever closer, the Dallas Cowboys are in the process of deciding just how much they want to dabble in the annual process. In previous years, the answer was not much dabbling, presumably because of the combination of organizational philosophy and salary cap restrictions. This year, the salary cap restrictions are removed… well sort of. If your’re looking at the Cowboys current free agents, plus what they’ll be pushing up against the next few years, the salary cap comes into play once again. It’s not just DeMarcus Lawrence and Cole Beasley that you have to think about in free agency.

As we’ve noted several times this offseason, the Cowboys are thinking about the future of their “new triplets” on offense, meaning Dak Prescott, Ezekiel Elliott and Amari Cooper. Dallas knows they will have to either extend/re-sign them, or let them go. If those were the only decisions to make, things would be much easier. They aren’t the only decisions to make. The Cowboys have some other key players coming up that they will need to take care of.

Before the Cowboys blow their roughly $50 million in cap space, they need to re-sign DeMarcus Lawrence, decide on extensions for Prescott, Cooper and Elliott, and factor in what it will take to keep some of the players listed above.

It’s unlikely they are overly concerned about Jeff Heath, but players like Jaylon Smith and Chidobe Awuzie could be expensive if they continue their current trajectory. La’el Collins is also going to cost some coin if the Cowboys decide he is their right tackle and worthy of another big contract. Randy Gregory is a real wild card. If he continues on the path he started this season, and can stay out of trouble off the field, he could become a very expensive re-sign. Players like Maliek Collins, Anthony Brown and Xavier Woods would also be worthy of consideration.

When you have a young roster that is productive and getting better each year, the second contracts become a real dilemma. It’s likely Jason Garrett, he of the expiring contact after this season, would want to go all in for this year and sign whatever help the team can acquire in free agency. He needs another big season to get another contract so he would be justified in being concerned just about 2019. On the other hand, Jerry Jones is thinking about this upcoming season, and the next few after that.

“We are in the stages of planning on all our personnel. We’ve got many of our players that we want to address their contracts in the future. But the obvious ones are the obvious ones and we’ve got some work to do on others. But all of that, we’re still in the fomenting stage, so to speak, of how we’re going to approach the overall venture.”

“We’ve got a holistic thing that we are looking at relative to — and holistic being this year, next year and, if you will, even into the third year — today,” Jones said. “And in our case we really do need to make this a two- or three-year season. I’m talking about not just DeMarcus but looking at our total player roster.”

Even with cap money to play with, the Cowboys might adhere to their recent philosophy of not getting involved in the first few days of free agency. With all that cap space available, Cowboys fans are fantasizing about signing this player or that player, but it might be just like the last few years. A lot of sitting around while the big contracts go out, then the bargain bin is opened and the Cowboys start to shop.