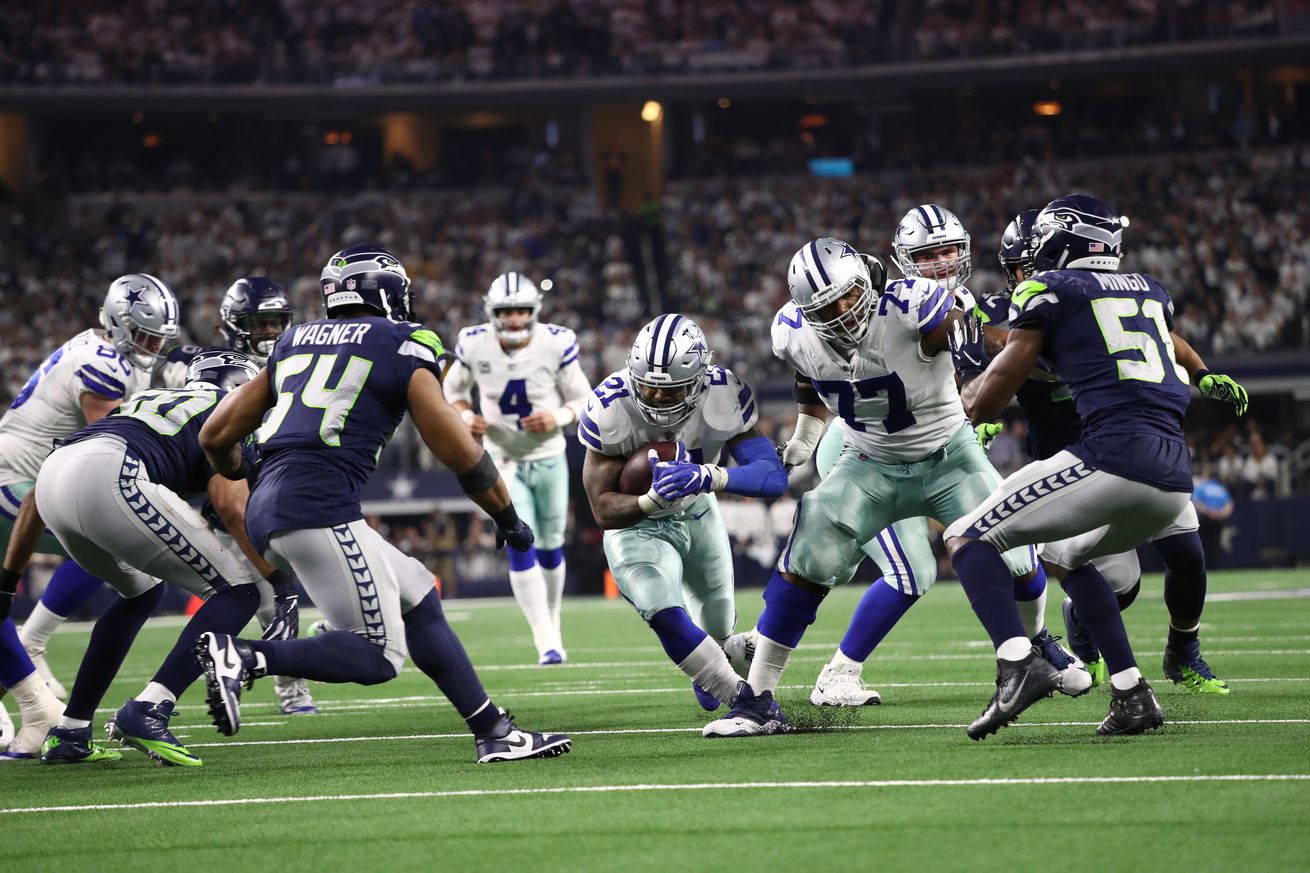 Yes, he is arguably the best running back in the league. But that doesn’t mean what it once did.

Judging by the number of readers and the social media engagement, I agitated the waste matter quite a bit with my post about whether Ezekiel Elliott was worth a big second contract from the Dallas Cowboys. It is a topic where even the staff here at BTB don’t agree, as our own DannyPhantom wrote his own article about why he was worth a big chunk of cap space. There were also some who agreed with my take. Frankly, this entire topic is part of a bigger debate about the role of the running back in today’s NFL. It is (at least to me) a very interesting one, and that leads to this piece to flesh out some of the reasons why the Cowboys should refrain from paying too much, and why it is hardly a death blow to their playoff hopes if Elliott achieves his financial goal with another team.

Most of those who disagree with me point to his production and a belief the team cannot win without him. Some of those were addressed in the original article, but that is the basis for not wanting to overpay him. It mostly comes down to whether the Cowboys could replace him and still have offensive success.

To try and illustrate this, here is a table of the top 20 running backs from 2018. It is, of course, led by Elliott.

The first column of numbers is naturally the total amount of yards, which is cited as one of the reasons the Cowboys have to have Elliott. A team just doesn’t move on from the reigning NFL rushing leader.

Except that is exactly what the Cowboys did with DeMarco Murray after the 2014 season, when he wanted more money than they were willing to pay. Murray actually had a much better year than Elliott’s past season, gaining 1,845 yards. And his rate of production was exactly the same, 4.7 yards per carry – which means he also had a ton of carries (392).

That yards per carry number is one that is very interesting, because there were so many on this list who did better than Elliott. It is true that he was running into stacked boxes more than any other back, as Danny pointed out. But that was presumably due to the offense as run by Scott Linehan. Hold onto that thought, because we will circle back to it.

The real reason for the table is that last column, however. While the first three players all were top-10 draft picks, things get a lot more varied after that. A couple of names jump out here. Chris Carson plays for the Seattle Seahawks, another team that emphasizes the run – they were first in the NFL last year, with 2,560 yards total on the ground. And Carson was a seventh-round pick, basically an afterthought in the draft. He still had the same per-carry average as Elliott.

Oddly, the Cowboys, with the top runner in the league, only ranked 10th, with 1,963 yards. That can be attributed to featuring Elliott, largely to the exclusion of anyone else. Of course, they only had two backups in Rod Smith and Darius Jackson.

So how does a team get a seventh round pick over 1,000 yards and outrun the rest of the league? Maybe the success of the running game has a lot to do with the blocking and scheme. Carson is certainly an argument that you can have real success with the run game without having to invest a high-first-round pick or a big contract.

And if you want the biggest value of them all, look at the Denver Broncos’ Phillip Lindsay. On a team without much talent at quarterback, he was still able to gain over 1,000 yards. When a UDFA can do that, you have to realize that there is a lot of running back talent out there. It is the closest thing to a truly interchangeable part in the league.

That is the real contention as to why a big-dollar extension for Elliott is not in the best interests of the Cowboys. If you notice, several backs were as productive or more so on a per-carry basis. That is the key number. The overall rushing total for a back is mostly a function of how often he gets the ball. How many were at 4.7 or higher just supports the idea that the Dallas offense would not grind to a halt if someone else was their starting running back.

Since Dak Prescott became the starter, the Cowboys have had a clear “run-first” strategy. That is as much because of Jason Garrett as Linehan. But neither of them have always gone with that approach. There were several years with Tony Romo when his arm was what carried the team. It was only in that 2014 year when they ran Murray into the ground that the idea of focusing on the run game seems to have come to the fore.

The biggest story so far of this offseason in Dallas has been the change at offensive coordinator, with Linehan supplanted by Kellen Moore. The prevailing belief is that he is tasked with getting away from predictability and easy to diagnose formations and personnel packages. Moore was replaced in his old job as quarterbacks coach by Jon Kitna, whose brief is reportedly to help Prescott fix his mechanical failures to become a more consistent passer.

If they are doing that, it is not hard to presume the trio of head coach, offensive coordinator, and QB coach are willing to de-emphasize the running game. There are tons of articles out there about how that is exactly what you have to do to have success in today’s NFL. It is the key to the high-flying offenses that have become so successful.

It does not mean that the running game is unimportant. The two Super Bowl teams this year also had top ten running attacks (the Los Angeles Rams were third in the league, while the New England Patriots were fifth). The key is that the pass is the primary way to move and score. The Cowboys have insisted on the old-school concept of establishing the run first and setting the passing game up from that. There is a persuasive argument that true success comes from getting the passing game going first, then using the run in the right situations. Less first down carries, and more on second and especially third and short, with an offense that keeps the defense guessing whether the ball will be thrown or handed off.

It is still to be determined just how much Dallas will change their approach, but the pieces are in place, including the addition of a true number one receiver in Amari Cooper halfway through last season. If they do move significantly toward a more pass-centered offense, then they don’t have to have a top draft pick to carry the ball.

It certainly wouldn’t hurt, of course, and the Cowboys do have control over Elliott for the next two seasons if they exercise the fifth-year option on him. He can throw a wrench into that if he does hold out, something he has reportedly considered.

But the risk for him there is what happened with Le’Veon Bell, who did hold out the entire season rather than play on the franchise tag for a second year (and foregoing a guaranteed $14.5 million). The Pittsburgh Steelers found a workable replacement with James Conner, a third-round pick. However, they also failed to make the playoffs. Whether Bell could have changed that is unknown, given the reports of real dysfunction with that team. Still, there are ways to make a player taken outside the first round succeed as your runner – especially with a very good run-blocking offensive line. With Travis Frederick looking to be back, and Connor Williams having a full offseason of conditioning, that is what is expected for the Cowboys.

It may not be fair that the running back position is so devalued in the NFL. It uses players up without getting the huge later contracts some other players receive. But it is the harsh reality. If teams want to succeed, they must operate accordingly.

That says that the Cowboys should not give Elliott a big second contract. It is not the wise way to invest your cap space. Especially not now, with the other deals they have to work out. If he is willing to take a lower offer, then it would be great to keep him. For now, that does not look likely.