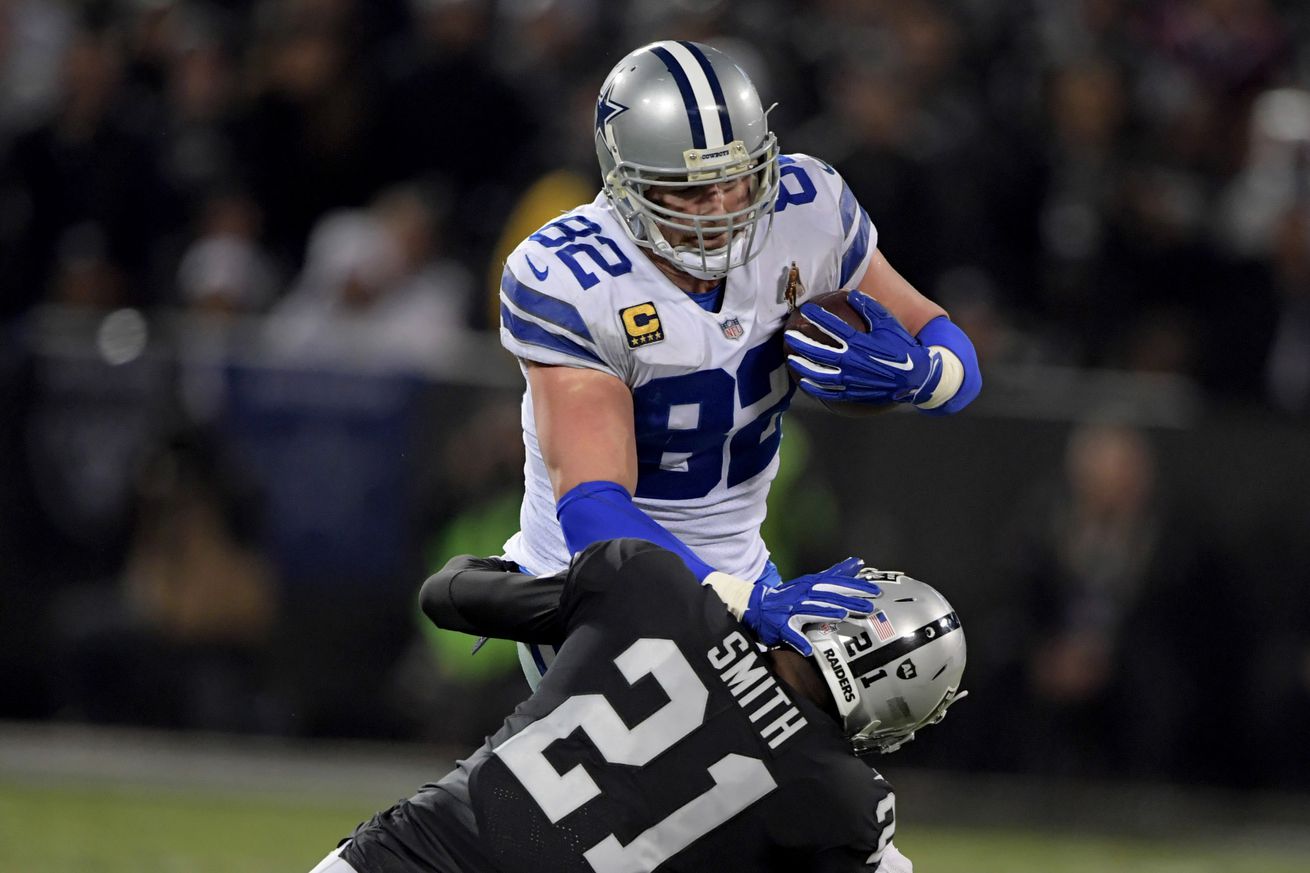 It was a jaw-dropping announcement. Now to figure out how it can be used to help the team.

It was a surreal moment. Of all the Dallas Cowboys stories that I had imagined seeing during the NFL Combine, Jason Witten coming out of retirement was down in the “never even thought about it” category. There had been some persistent reports that the future Hall of Fame tight end was really missing the game. He was certainly not getting the approbation for his broadcasting skills that his old buddy and teammate Tony Romo was. But to actually do this caught most of the football world by surprise.

My first reaction (after scrolling down and making sure this was not something from a troll account) was positive. Witten is a living legend for the Cowboys. He is unquestionably a leader. But he is also closer to 40 than 30, has never been fleet of foot, and saw a real downturn in his production in 2017, including his yards after catch numbers. Can he really help a team that is fighting to break through in the playoffs? (Not to mention a head coach in the last year of his contract.)

Like so much about the Cowboys this year, it depends on how the team goes about things. If they handle things well, then Witten can indeed be a plus in his return to Dallas. Here are some of the ways that can happen.

He’s already made one contribution

The Cowboys were expected to be in the market for a tight end in free agency. Tyler Eifert was a name that was thrown out there a lot. Dallas could still consider signing another TE, but Witten’s return does round out the tight end position and he does not impact the compensatory draft pick formula. It may be a small thing, but it is entirely possible that the Cowboys could get one extra pick next year just because of Witten, since his return will likely mean one less outside free agent that the team will sign this year. That increases their chance of coming out with one when the compensatory picks are handed out.

But no doors should be closed

The Cowboys tend to go heavy at the TE position, so it would not be at all surprising for them to look to carry four into the coming season. So they still can be on the hunt for more talent. That may still involve another free agent, but the real opportunity looks to be in this year’s draft. The tight end group is seen as one of the strongest in this year’s class. Witten does not block them from taking one if the right player is available. His contract is only for one year, so the staff has to do some long-term thinking as well.

So how about on the field?

That is the big question, of course. Just what can be done with an aging, slow veteran?

This is going to be Kellen Moore’s task. It has been reported widely that Witten has accepted a more limited role than he previously held, with around 25 plays per game. That means that Blake Jarwin, Dalton Schultz, or possibly a rookie could be the starter. Witten will be a role player, but what role?

That should center around what he does best and that is get open. He doesn’t do that with athletic ability, but with his knowledge of the game and his position, and his size. Even in his last season, 2017, he still would find ways to give Dak Prescott a target.

There are two situations when he can be a real plus doing that, on third down and in the red zone. He needs to be the new security blanket for Prescott, the guy he can go to when the other receivers are covered.

Last season, Ezekiel Elliott was the guy that Prescott looked for in those situations. That needs to change, because many times, Elliott got the ball with no real shot at making the first down mark. He was usually sitting down in the middle of the field two or three yards from the line of scrimmage, or out in the flat at or behind the line. But Witten, with his half-a-foot height advantage and superior route tree, should be able to work at the sticks. When he is single covered, he is nearly impossible to shut down.

In 2017, many teams were able to severely limit him with double coverage. But they got away with that because they were handling Dez Bryant with a single defensive back. Now, Amari Cooper will be demanding attention. He is even more of a master at getting open in single coverage. Defenses won’t be able to double both Cooper and Witten, and that means one will be an opportunity to get a new set of downs.

The other place that Witten can be a key element of the attack is in the red zone. He has long shown his ability to get open in traffic, again using his height and strength.

Routes are important, which is where Moore has to do a better job than Scott Linehan did. He has to send in plays that get the targets past the sticks, or in routes where they have a good chance at getting the distance needed. Witten is going to need to focus on the former. Let Cooper and others handle the crossing routes or go deep. Witten just needs to get over that yellow line we see on our screens, or into the end zone, and outwit the defender.

Some were not as surprised by Witten’s return, because they had heard and heeded his frequent remarks about missing the game. He also talked about having an eye toward coaching in his future, and the return to the game is believed to also be a step in that direction. Jarwin and Schultz are young and definitely could benefit from some mentoring. Witten has always been one of the hardest working players anywhere, and if he just passes that work ethic on, he will make the other tight ends better.

Of course, there is so much more he can teach them, and that is likely to be something that will be important for him. He isn’t just coming back to play for the Cowboys. He is returning to help the team in every way, and that should include making the players around him better in every way he can. And, has been noted, the CBA severely restricts the time coaches can spend with players, but cannot limit the time some players get together to have one of them share a tip or two with the rest.

That goes beyond the tight end room, as well. He has long been a leader in the locker room, and is expected to step right back into that role.

Witten is a little bit older and not any faster than he was in his last season on the field. But his real strength is his football wisdom and wiliness. If the team puts him in a position where that can be employed, then he can be a real asset in all aspects of the game.