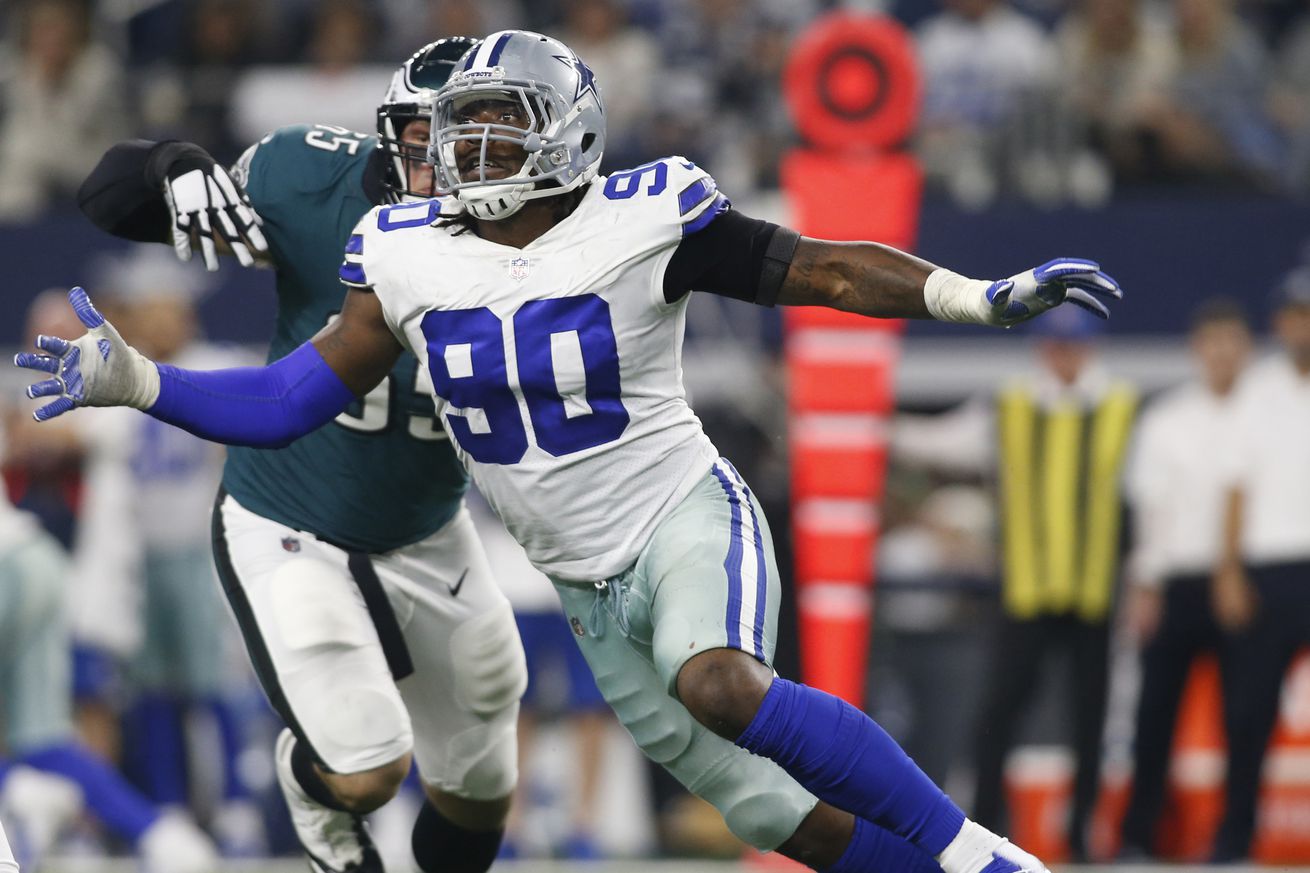 Source: Cowboys take next step tonight, to meet with Tank agent – Mike Fisher, 247Sports
Cowboys expected to meet with DeMarcus Lawrence’s reps at combine. Could a deal get done over the weekend?

The Dallas Cowboys arrived in Indianapolis for the NFL Scouting Combine harboring what I called a “quiet optimism’’ regarding their plans for a contract agreement with star defensive end DeMarcus Lawrence. Upon his arrival in Indy, COO Stephen Jones took another step forward by acknowledging that Dallas had made its “first offer’’ to Tank — a generous concession because that meant (when reading between the lines) that a second offer would likely be soon forthcoming.

And here we are, a source telling me that tonight in Indy, team officials plan on meeting with agent David Canter in attempt to move the ball forward.

I’ve long believed that both sides can be on the same negotiating page because it’s simply so obvious what needs to be done with the free agent star. Owner Jerry Jones is on the record expressing that very sentiment. The clock is ticking now, but there is still “optimism’’ that an agreement is on the horizon — with the framework around that horizon being the March 5 deadline for NFL clubs to designate franchise players.

Scout’s Notebook: Who Impressed At OL & RB? – David Helman, DallasCowboys.com
With combine workouts kicking off on Friday, which RB’s and OL stood out in the drills?

On my board I have Texas A&M’s Trayveon Williams, Memphis’ Darrell Henderson and Iowa State’s David Montgomery all bunched together in the third round. After the workout I feel like not much has changed there. I might have these guys a round too low, but for right now I am going to keep them there. I did like the workouts that Williams and Montgomery put together, along with the 40 time of Henderson. I would be happy with any of these guys as a backup to Ezekiel Elliott.

The NFL’s salary cap for 2019 has been finalized at $188.2 million per team, up from $177.2 million last year and marking the sixth consecutive year it has grown by at least $10 million.

The final figure is the result of negotiations between the NFL and the NFL Players’ Association and is tied mainly to league revenues. It does not include benefit costs, which a source said would come in at around $40.5 million per team this year. That means each team’s total allotment for player costs will come in at around $228.7 million.

Cowboys’ David Irving Suspended Indefinitely for Substance-Abuse Violation – Megan Armstrong, Bleacher Report
Former Cowboy DL David Irving was handed a suspension from the NFL. While the team was likely to move on, this all but assures that is going to happen.

However, Irving only appeared in two games for the Cowboys last season, and the franchise’s commitment to the embattled free-agent defensive lineman reportedly had been waning.

Earlier this week—before Irving’s suspension was made official by the NFL—ESPN’s Adam Schefter appeared on Golic and Wingo and said Dallas would not bring back Irving, who is set to become a free agent once the new league year begins:

”It seems like that’s been very clear from Dallas’ standpoint that they’ll let him get to the market, and again, when you have questions like this hanging over you, you know, you wonder if any team is gonna go sign a guy like that. … When we see the league year open on March 13 … there are a lot players that are gonna be signed out of the box.

”David Irving’s not gonna be in the group right now. It’s just not gonna happen that way with some of these questions surrounding him going forward.”

The Dallas Cowboys have begun their pursuit of free agent safety Earl Thomas.

The team met with Thomas’ agent David Mulugheta on Thursday at the NFL Scouting Combine, according to a source.

It’s no secret that the Cowboys have been interested in Thomas, dating back to last off-season when they initially engaged in trade talks with the Seattle Seahawks.

Thomas has long expressed a desire to play for the Cowboys, who grew up a fan in Orange, Texas and played in college at the University of Texas.

That former Seahawks defensive coordinator Kris Richard is the Cowboys secondary coach/passing game coordinator is another tie that binds.

But familiarity and affinity won’t matter when it comes to securing Thomas in free agency.

He is open to signing with any team and he has no interest in giving the Cowboys a home discount, according to a source.

Jones appeared on ESPN’s “NFL Live” live from Lucas Oil Stadium on Friday afternoon, where he discussed a number of the big topics surrounding his team this offseason.

Here are some notes from the interview.

“In my time in the NFL, commissioners, owners, players, coaches, Jason Witten is in the top five people I’ve ever met,” Jones said. “He’s just an outstanding person to be around, and he leaves and left a hole with the Cowboys and with what a coach would look for when he left to go into broadcasting.”

· How much does Jones believe in quarterback Dak Prescott? Let him explain: “If we were sitting here this afternoon and tomorrow and he was out on that field getting ready to go in the draft as a quarterback, and I had the No. 1 pick, that’s who would get that pick in this draft. That’s what I think we’re looking at, except we’ve had three years of really getting to know him. We’re a fortunate franchise to have Dak Prescott, and we’re going to build around him for the future.”

Finally here is a list of all QBs with 1500 passes since 2009. pic.twitter.com/JvR6ILncak

Mosley: I’m really glad to see the guy happy. He was getting killed in the broadcast booth. There are a lot of reasons for that, and some of them aren’t his fault. But he needed to find a somewhat graceful exit that didn’t leave too much of a mark on his career. The Cowboys provided that exit. And they know that he’ll show up ready to go and make a major impact on this team. What Ed Werder and I talked about yesterday on our Doomsday podcast was how this will set up Jason Witten to possibly coach in the future. And with Jason Garrett being in a lame-duck situation, that transfer of power could happen as quickly as the 2020 season. We heard rumors that Witten was interested in taking the Tennessee Vols coaching job when it was open recently. That was sort of a disastrous process, so he was wise to stay out of that in the end. But his grandfather was a coach, and it makes sense that Witten would become a coach.

Does The Draft Process Change With No 1st? – David Helman, DallasCowboys.com
Will the Cowboys front office change the way they draft without having a first-round pick?

The much-discussed 30 visits – that is, the 30 national draft prospects the Cowboys are allowed to bring to visit their facility – are mainly top-tier players. Last year, eight of the Cowboys’ visitors were eventual first-round picks, and 13 of the 30 were top 60 selections.

Will that change without a first-round pick? Cowboys coach Jason Garrett didn’t want to speculate, citing the importance of due diligence in the draft process.

“You have to be careful. Trades happen, there’s a lot of different ways to have access to some of those players,” Garrett said. “I don’t think you just say ‘Oh, that guy’s going to be gone.’ I don’t think that’s the right approach.”

Garrett made another worthwhile point: there’s no limit to the number of ways NFL teams can access draft prospects. The Cowboys benefit greatly from their Texas location, as they can bring any prospect from the talent-rich Dallas area to their facility without it counting toward their 30 visits.

They can also travel wherever they want to evaluate prospects in their hometowns or at their colleges. Back in 2016, the Cowboys’ full coaching staff traveled to Ohio State to work out the Buckeyes’ loaded draft class – including Ezekiel Elliott, Joey Bosa and Michael Thomas.

Through five years with the Denver Broncos, outside linebacker Shaquil Barrett took a backseat behind Von Miller, DeMarcus Ware, Shane Ray and Bradley Chubb. It’s a list of All-Pros and first-round picks. No one can blame the 2014 undrafted talent out of Colorado State for struggling to crack the starting lineup.

At the moment, the Broncos have their edge-rushing tandem set, featuring Miller and Chubb. Barrett could re-sign and remain in a reserve role as depth, but he can aim higher for statistical bests.

Barrett flashed over the last four years, which suggests he could emerge as a key playmaker in a starting position. The linebacker accumulated 100 solo tackles, 14 sacks, seven pass breakups and seven forced fumbles, opening 15 of 61 contests with the first-unit defense.