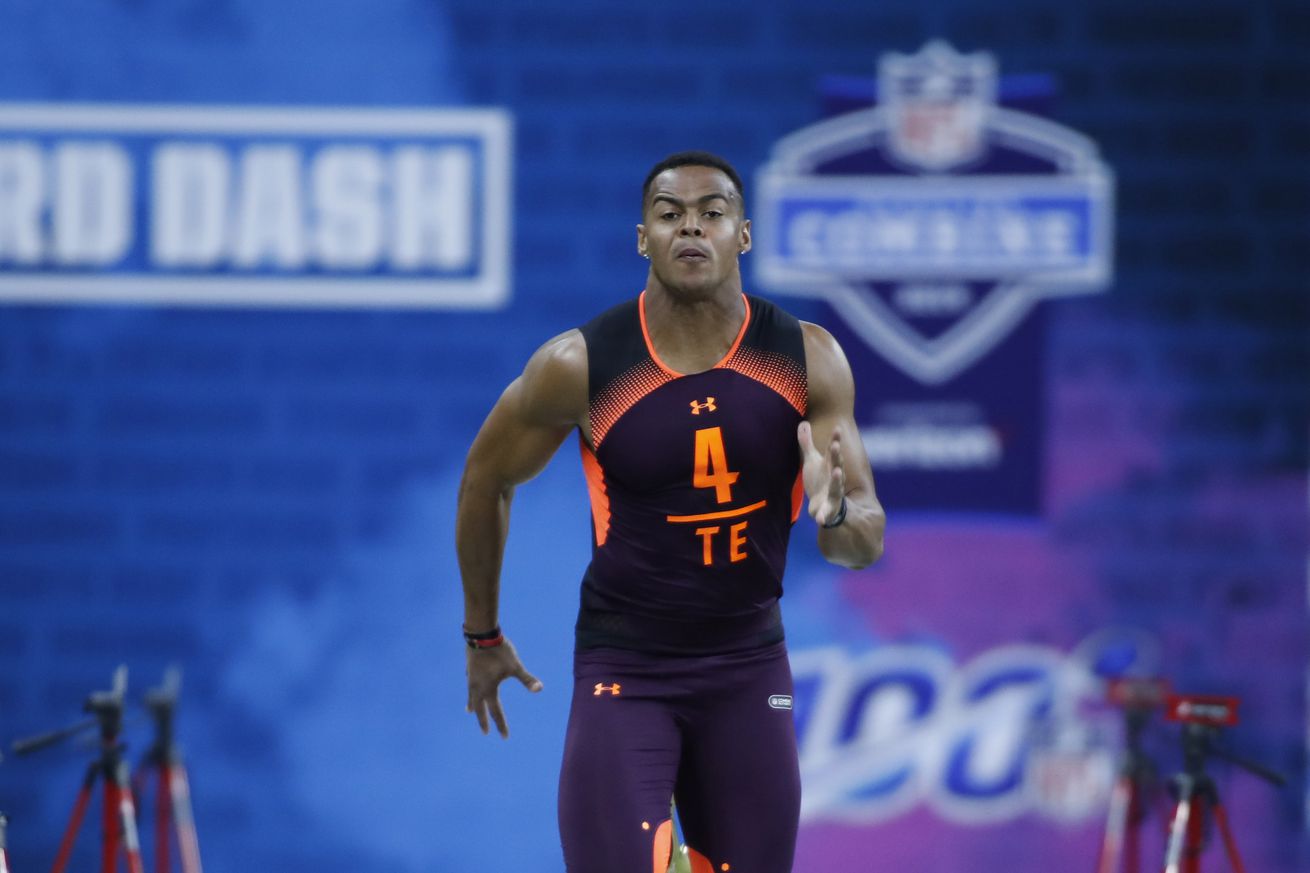 Former NFL player and scout Bucky Brooks highlights some players who might have changed their draft stock, for better and worse.

Justice Hill, RB, Oklahoma State: Hill put on a show in a brief but spectacular appearance. He blazed the turf with a 4.40 40 and added some impressive numbers in the broad jump (10-foot-10 inches) and the vertical jump (40 inches). All of those figures ranked first among running backs. Despite cutting the workout after pulling up lame on his second 40-yard dash, Hill left a positive impression on scouts as an explosive athlete.

Devin Singletary, RB, Florida Atlantic: The Florida Atlantic playmaker came to Indy hoping to make a surge up the charts, but a disappointing 40 time (4.66) could sink his draft stock a bit, with teams looking for explosive playmakers to build around. Singletary can make up for it with a solid workout at his pro day (March 26), but he has some work to do to re-create the buzz surrounding his prospects.

How did the tight ends look on Saturday?

Iowa’s Noah Fant had a great day, blazing an official 4.50-second 40-yard dash at 249 pounds. He’s also a natural catching the football, and though he isn’t going to give teams much as a blocker, he should step right in as a receiving weapon in his rookie year. Iowa’s other tight end in this draft, T.J. Hockenson, had a solid day, and while he didn’t leap off the screen running a 4.70-second 40, he showed how complete a prospect he is in the blocking drills and gave no reason to move him off the No. 1 spot at the position. He’s the kind of guy who looks more impressive in pads than shorts, anyway. Alabama’s Irv Smith, Jr. didn’t do himself any favors on weigh-in day, measuring 6-foot-2 and 242 pounds with 31 1/2-inch arms, 9 1/2-inch hands and a 74 7/8-inch wingspan. He posted a quality 4.63 40 that nevertheless didn’t sniff Fant’s time, then he had an uneven performance in the drills, looking smooth catching the ball at times but stumbling and hitting the ground more than once. He also seemed to tweak his ankle running an in-route, which could have affected his performance in later drills.

Ole Miss’s Dawson Knox didn’t run a 40 as he continues to recover from sports hernia surgery, but he sure looked impressive in the other drills. He hauled in one low pass on his in route that would have eaten up many other players.

Texas A&M’s Jace Sternberger had a great performance in the drills after running a 4.75 40. He displayed his long arms on catching one high pass that seemed to give some of his other position mates trouble. Any team that passes on one of the top TEs in the first round to address other needs should be giving him a look on Day 2.

The Cowboys may be in search of a new slot receiver if Cole Beasley leaves in free agency, and Andy Isabella might be a nice replacement.

The 5-9, 188-pound Massachusetts wide receiver tied with Ohio State’s Parris Campbell for the top 40-yard dash time at the NFL scouting combine through days with his 4.31-second run. Isabella’s original times were listed at 4.56 and 4.46 seconds, but ESPN’s Field Yates said there was a laser error during his first attempt that was later clarified. Isabella, who led the Football Bowl Subdivision with 1,698 receiving yards in 2018, beat out Cleveland Browns cornerback Denzel Ward in both the 100- and 200-meter races in high school. Ward tied for the top 40 time at the combine last year at 4.32 seconds before becoming the No. 4 overall pick.

A center may not be atop the Cowboys wish list, but with the uncertainty of Travis Frederick the team may feel differently if the right player fell to them.

C Erik McCoy: McCoy was an early entrant to the 2019 draft class. So, his status took a little time to build momentum. The redshirt junior was allowed to participate in the Senior Bowl since he already graduated, and he performed well. If his all-star performance didn’t warrant enough attention, the 6’4”, 303-pound center blazed a linemen-leading 4.89-second 40-yard dash. The on-field portions of McCoy’s workout rivaled anyone else’s best. He moved effortlessly throughout the drills and showed good balance and technique.

“I’ll say it a hundred times: Erik’s the best center there is,” former A&M offensive lineman Keaton Sutherland told the Dallas Morning News’ Ben Baby. “He’s the smartest that there is. To have him playing next to you makes your life a lot easier because he’s making the calls, he’s letting you know what to do and helping you out.”

And with the health of Tyron Smith and La’el Collins in the last year of his contract, the team could be on the prowl for a talented young tackle.

Remember the name of Dalton Risner: Offensive linemen maybe shouldn’t be charming. Kansas State’s Dalton Risner is charming as hell. Risner is the classic tale. He grew up in the small Colorado town of Wiggins. They don’t have any stoplights there and just a single gas station. As a football prospect, Risner was completely off the map for college programs. To get the attention of schools, Risner and his father went from football camp to football camp beginning when he was in eighth grade. Slowly, college coaches started to learn about the vicious blocker. By the time he was almost finished with high school, coaches were well-aware of Risner. “Not against anyone here, but I don’t think I was necessarily destined to be here,” Risner said on Thursday. “I take a lot of pride in where I come from.”

That’s not the only aw-shucks thing about Risner, a likely NFL right tackle who could get taken in the first 50 picks of the draft. Like many prospects, the media peppered him with questions about the teams he met in Indianapolis. The combine interview process is a whirlwind for players, and it can be hard to remember which teams they’ve met. Risner not only remembered every single one, but he knew the offensive line coach of each team. Like all those college coaches, the NFL coaches will now start remembering Risner’s name too.

Three Running Backs Who Helped Their Stock At The NFL Combine – Kyle Crabbs, The Draft Network

The running backs have run the gauntlet, so which players helped their draft stock?

Miles Sanders, Penn State: If you were expecting a repeat of Saquon Barkley’s performance at last year’s NFL Combine, you may be a little disappointed. But to be frank, those are probably the only circumstances in which you should be underwhelmed. Sanders turned in an all around, rock solid day. Was he dominant in any one test? The three cone (6.89 seconds), which is a great measure of change of direction skills. In watching Sanders’ tape, it was apparent that he had a lot of spring in his steps. Sanders confirmed that with his time in this particular drill. At 5-foot-10 and 5/8th of an inch and 211 pounds, here are Sanders’ other tests: 4.49 second 40-yard dash 20 bench reps 36.0” vertical 10’04” broad jump 4.19 short shuttle

For those curious about what are good numbers for certain position groups, make sure you have soon-to-be Hall of Famer Gil Brandt’s handy, dandy chart.

When you watch the NFL combine workouts this week, keep this chart handy. These are my target test results for each position and event. pic.twitter.com/w3yzY8PcGF

Some of the more popular names at running back had a tough time at the combine.

It was a rough 40 yard session for these top backs who have been getting a lot of attention from the Draft media leading up to the event. Now before we go any further, neither of these running backs were expected to put up fast times but we did expect them to do better than what they did. Holyfield’s 4.79 time along with him catching the ball awkwardly raises some major questions and having some wonder if he’ll fall all the way to the bottom of the draft.

Montgomery is known for his lateral agility and contact balance but now we have to wonder if he can create any misses on his own.

Where as Singletary has been compared to Lesean McCoy who ran much faster. Now we can’t just say they ran slow and now they are done. We should go back to the tape and see if this shows up but also we need to go to their pro day and see if they can improve on these times. It helps that most of the running back class didn’t look great either.

The news of Randy Gregory certainly makes you think twice about taking chances on red-flag players, but could the need at defensive tackle push the Cowboys in that direction?

He owns all the tools needed to be an impactful defensive lineman at the next level. The off-field questions do concern me a little, just because we’re talking about a Cowboys team who just had their fair share of concerns with David Irving. My instincts tell me the Cowboys have such a pressing need for difference-making interior defensive linemen that they’ll be more than willing to break their trend and consider taking one with their first or second selection in this draft.

There’s a lot of homework to be done, and it all starts this week at the combine. I’m sure the Cowboys will use one of their 60 15-minute interviews with Tillery. There’s a pretty good chance he’ll be one of their 30 visits as well.

So front office decisions seem like a no-brainer, but then next thing you know – Khalil Mack is being shipped off to Oakland. Bleacher Report takes a look at each team’s toughest contract decision.

The Dallas Cowboys have themselves a star pass-rusher in Demarcus Lawrence. Obviously, they’d like to prevent him from hitting free agency, but that isn’t going to be easy. If Lawrence rejects Dallas’ long-term contract offers—ESPN.com’s Todd Archer reported that an initial offer has been made—Dallas may have no choice but to use the franchise tag as a placeholder. This could create a volatile situation. Lawrence played under the franchise tag last year and isn’t interested in playing under it for a second consecutive season. According to NFL Media’s Tom Pelissero, Lawrence will not sign his franchise tender if tagged again. The Cowboys don’t face a dire cap situation—they’re projected to have more than $46 million available—but they have to be cautious about how much they spend on Lawrence. Ezekiel Elliott, Dak Prescott and Amari Cooper are going to want their own big deals in the near future.