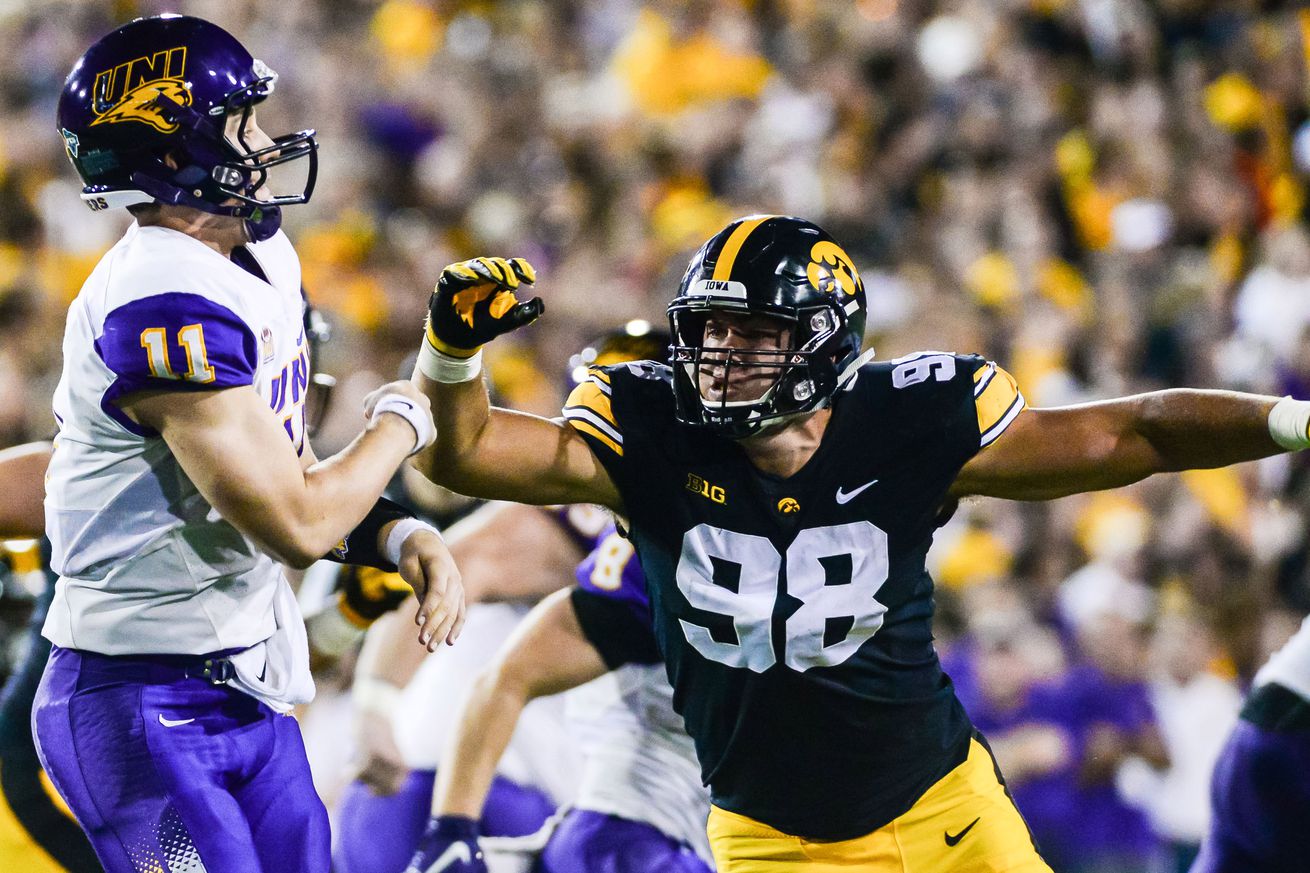 With Randy Gregory’s suspension, the Cowboys might look to draft an edge rusher.

Edge rusher wasn’t seen as a real need for the Cowboys going into the offseason. DeMarcus Lawrence was the stud on the left end of the line (supposing his re-signing) and between Tyrone Crawford, Randy Gregory, Taco Charlton, and Dorance Armstrong Jr., the team had enough of a rotation to get production on the right side.

But now Gregory’s suspension may throw all that up in the air. It’s possible that the team thinks Crawford, Charlton, and Armstrong are sufficient on their own, or they could look to sign someone in free agency. Gregory might even be able to return in time for 2019, too. But it’s also possible that Dallas looks to draft an edge rusher in a draft class that’s fairly deep with talent.

That’s where Iowa’s Anthony Nelson fits in. As can be seen by his frame, Nelson is a massive body on the end of the line, and that might be what draws the Cowboys to him given how they value length from their edge rushers. But if you’re thinking Nelson is some athletic freak of nature, not quite. Rather, Nelson is a pass rush technician in Bigfoot’s body.

I’ll get the negatives out of the way first. Athleticism is an issue for Nelson. His burst and first step off the snap is average at best. Nelson does a good job of timing the snap to make up for this deficiency but the fact is that Nelson will likely never just run by his blocker. Nelson is also very tight in his hips and doesn’t display a lot of bend, frequently taking bad angles that will get him in trouble against better NFL tackles.

But Nelson does a lot of the fundamentals really, really well, and that’s where his appeal lies. Even though there’s not much athleticism behind his frame, he uses every inch and pound when he plays. Nelson packs a strong punch and makes great use of his long arms (measured at 34 7/8” at the combine) to get full extension against tackles. He does a really good job of getting off blocks too, and has demonstrated good patience in doing so against the run.

When rushing the passer, Nelson has a really good repertoire of pass rush moves. His best and most often used move is a bull rush, which is most effective because of his size and length. Against smaller tackles, Nelson showed an ability to drive them straight back with the bull rush. But he also has several other moves with his hands that he can use and stack on top of his bull rush, giving some versatility to his pass rush prowess.

In this draft class, there are a lot of players with tons of athletic upside who just need to work on the fundamentals, but Nelson is the exact opposite. He’s very technically sound and even offers great length that he utilizes well, but the tape shows a lack of elite athleticism. He did help himself at the combine with his 40 time, as well as the 3-cone drill and short shuttle, and finds himself on the border of an early day three selection to day two selection.

If the Cowboys got him, they’d be getting a great edge rusher who can contribute in both run and pass downs. Perhaps the access to the kind of strength and conditioning program the Cowboys have can improve Nelson’s athleticism, but as it stands Nelson comes into the NFL with a pretty high floor. He can come in and contribute to this pass rush immediately.