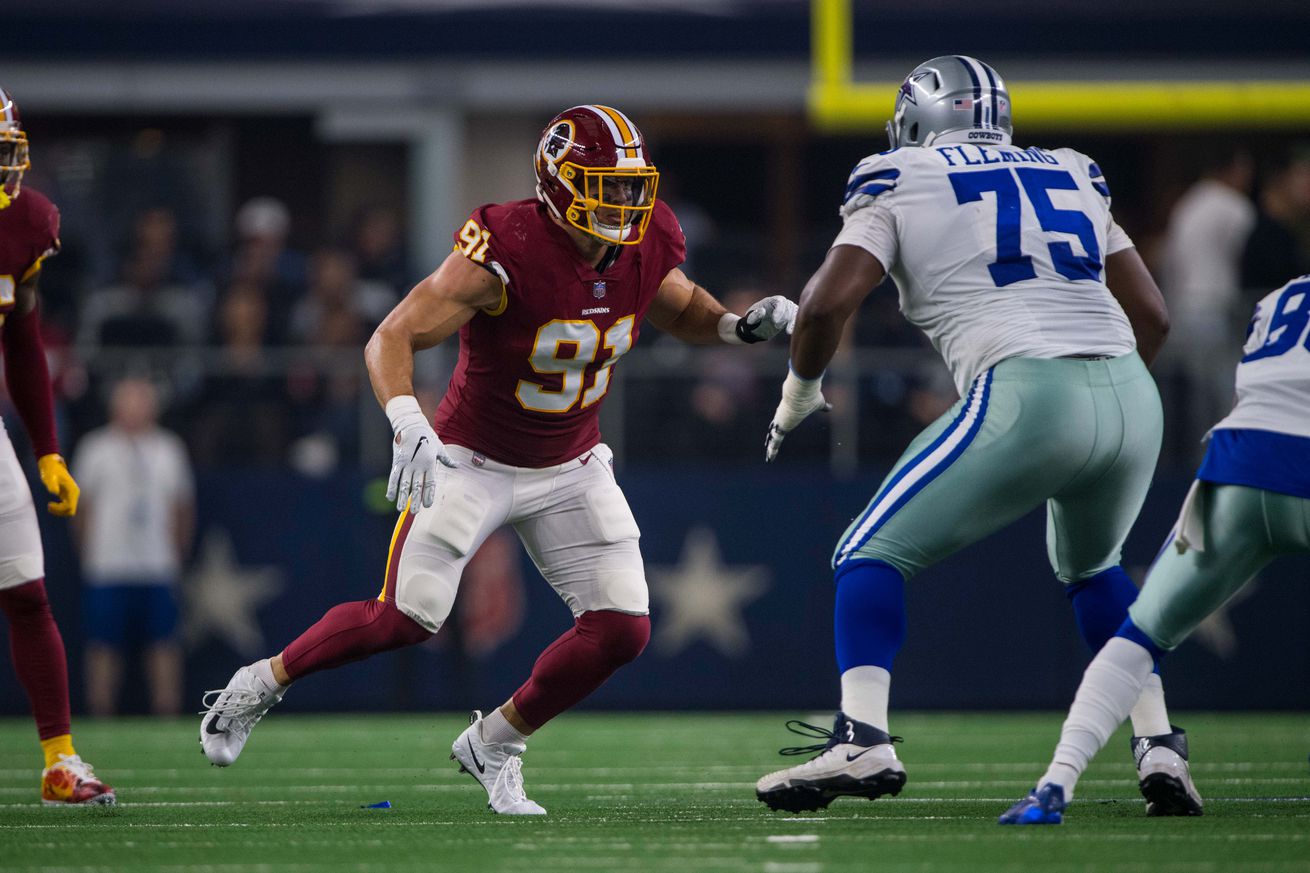 Cameron Fleming is a free agent, if he’s not re-signed, the Cowboys will be looking for another swing tackle.

The Cowboys have more than enough on their plate as they try to work towards extending some of their biggest contributors. Searching for a swing tackle may not be as high on their offseason checklist but it’s still important when you consider the punishment of the position. Tyron Smith and La’el Collins are both guys that often play through the pain but there have been several occasions in the past couple of seasons when Smith was out of the lineup. In the NFL, you should always have a contingency plan in place, which means swing tackle is an underrated, but crucial, part of the Cowboys depth chart.

Last season, the Cowboys signed Cameron Fleming, a 26-year-old tackle that had spent the early portion of his career starting at various spots for the Patriots. Fleming is set to be an unrestricted free agent again this spring. The Cowboys signed Fleming to a one-year deal worth up to $2.5M, that’s not a bad place to start negotiations with him for a potential deal this offseason.

Cameron Fleming struggled early on in camp but his play got better as the season wore on. On a unit that was missing an All-Pro center in Travis Frederick, while dealing with a rookie at left guard, Fleming wasn’t a liability when he had to come in for Tyron Smith. The Cowboys unit as a whole gave up over 50+ sacks, that might scare off other teams looking to sign the Cowboys depth. Then again, with how porous offensive line depth is in the NFL, you never know what another team may pay for his services.

If the Cowboys can’t swing a deal for Cameron Fleming, who is available on the free agent market?

The Cowboys are willing to pay top of the market value for a swing tackle as they kicked in nearly $3M for Fleming. It’s important to find guys that have some experience but that doesn’t mean they must have a ton of starts. This list is a mixed bag of guys that could be of interest. You have guys that have started a lot of games in this league like Andre Smith of the Bengals. Last year, Andre Smith was a popular possibility in free agency as he was a disciple of Paul Alexander but we all know how that turned out for the coach. At 32, Smith is a nice bargain for the experience but Dallas will likely want a younger player.

LaAdrian Waddle was also in free agency last season and is a former teammate of Cameron Fleming’s. Waddle has started plenty of games and can play both sides of the line but he’s much more comfortable as a pass blocker. If not Fleming, maybe the Cowboys make it two consecutive years of going after former Patriots players. Jordan Mills had a brief stop in Dallas so the coaches are somewhat familiar with him. The Bills probably never expected Mills to start as many games as he has but attrition allowed for him to get quality play time. Joe Barksdale is another guy with experience but how much did he contribute to line issues the Cardinals have been experiencing lately?

T.J. Clemmings has been mentioned here before by my podcast partner, Tom Ryle. Clemmings was dealing with injuries more recently but he has plenty of football experience to be a consideration. If he can stay healthy, the Cowboys would likely be interested in the former fourth-round pick. Brent Qvale and Ty Nsekhe haven’t had nearly as many starts as some of the others on this list and paying them what their 2018 average for little production is not something the Cowboys will want to do.

All in all, Cameron Fleming may be the best option if the Cowboys can keep him from heading out in free agency. Another candidate to watch is former Cowboys swing tackle, Jermey Parnell, he’s rumored to be a potential cap casualty of the Jaguars. Releasing Parnell would save Jacksonville $6M, he’ll have to take less to return to Dallas. It’s likely that he may have a few suitors but it’s just another name to keep an eye on as the Cowboys sort out their swing tackle plans for 2019.