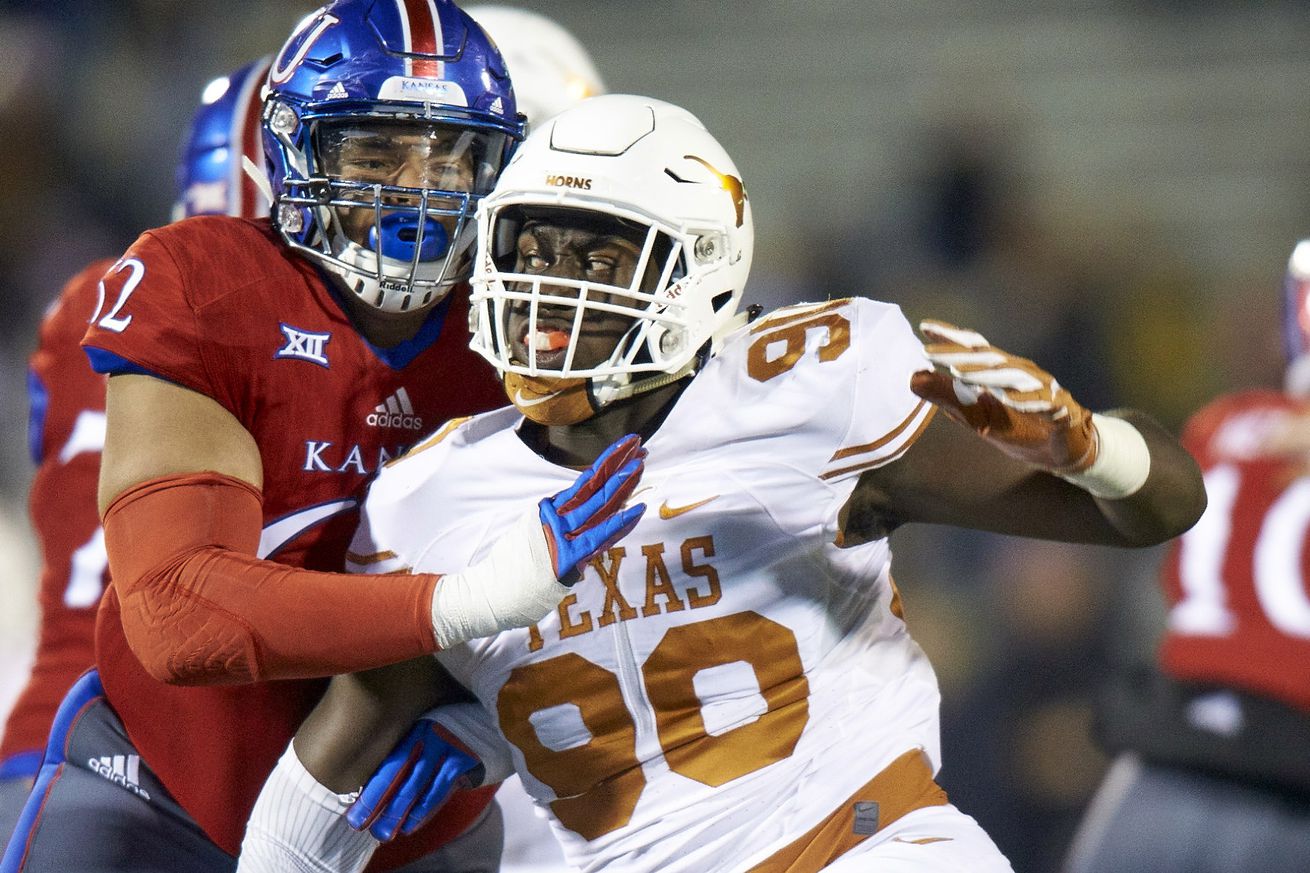 Charles Omenihu never got the memo that they don’t play defense in the Big 12.

The Cowboys entered the NFL Combine with a desire to check out the defensive linemen in this draft class, of which there are many intriguing options. The Cowboys seemingly have two needs along the line with David Irving not likely to be re-signed and Randy Gregory indefinitely suspended. It’s not surprising, then, that the team took the time to meet up with Texas defensive lineman Charles Omenihu at the combine:

Texas DL Charles Omenihu says he met with the #Cowboys at the Senior Bowl and had an informal meeting with them at the NFL combine.

Omenihu is a talented player. The biggest question mark about him, though, is where he fits in a defense. Prior to the combine, he was thought to weigh in the low 270’s, which gave some the idea that he’d fit best as a defensive end in a 4-3 scheme despite playing primarily defensive tackle in college. But at the combine, he had bulked up to 280 pounds, and when comparing his results against other defensive tackles Omenihu stood out aside from his weight.

This is what Charles Omenihu looks like as a DT. Only weighs 280, but certainly has the frame to bulk up. pic.twitter.com/6cWoIb0HTG

As Mosher points out, Omenihu can add more weight to his frame to better compete on the inside. Where he fits on a defense is still somewhat up in the air – it’ll be very interesting to see him at his Pro Day on March 27 – but the fact remains that he is a very talented prospect that could help out Dallas immediately.

Omenihu has great length, as evidenced by his 36” long arms, and he uses them well, getting full extension with regularity. He combines this with a really explosive get off, although sometimes there are lapses where he doesn’t time the snap well enough. Still, when he does he is off the line of scrimmage in a flash and reaching out his arms to punch the blockers square in the chest.

Omenihu’s hand usage is also ideal, as he does a good job of placing them when engaging with blockers and knows how to disengage. He does a good job of figuring out what the protections are and reacting to them with his attack, and Omenihu also holds up well in run defense, largely due to his ability to shed blocks and then utilize his length to wrap up ballcarriers.

While he primarily played as the 3-technique defensive tackle, the Longhorns also asked Omenihu to line up as a defensive end in Wide 9 formations, and this is where Omenihu really flashed his pass rushing skills. He has a deep repertoire of moves that he uses to dispatch blockers, and he does a really good job of bending around the corner when coming off the edge.

One of the reasons that weight is a concern for Omenihu is due to his strength, especially in assessing his ability to rush the passer up the middle. He didn’t participate in the bench press at the combine, so that question is still a bit murky. However, Omenihu certainly has the ability to rush off the edge in certain 4-3 sets.

If not for the questions about his size and positional fit, Omenihu might even be rated a fringe first-rounder. And he still might be, especially after a good combine performance. He seems to be a more athletic Tyrone Crawford with his versatility around the defensive line, and given the Cowboys’ needs right now, that might be a good thing. The only question Dallas has to ask about Omenihu is if he’ll still be on the board at 58. They clearly have interest in him, evidenced by their two meetings since the Senior Bowl, but his stock might be out of their range.