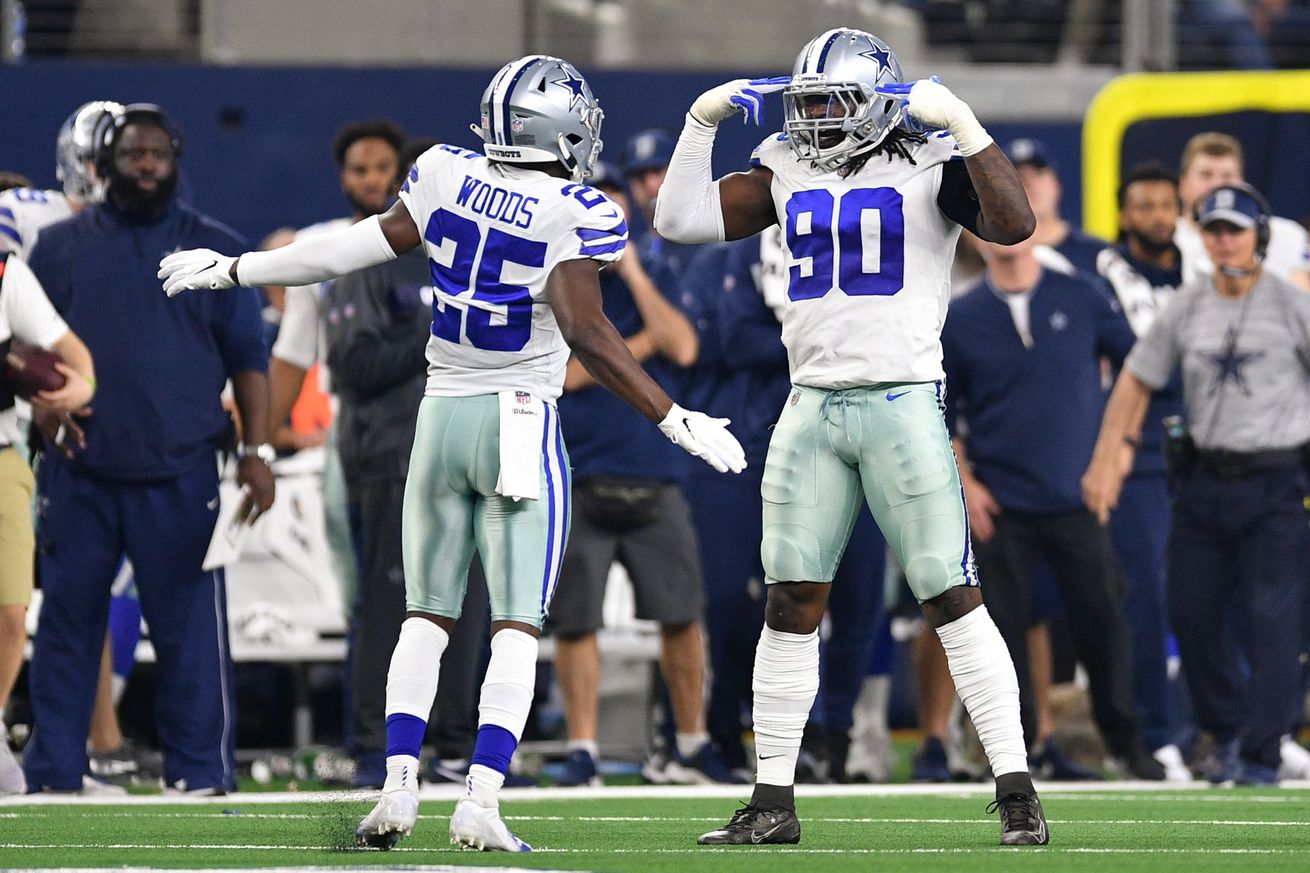 Plus more on free agency and the rest of the news you need.

Mick Shots: As The NFL World Turns – Mickey Spagnola, DallasCowboys.com
Some thoughts to keep in mind about the current furor over the DeMarcus Lawrence situation.

To me, the Cowboys had little chance of coming to terms with defensive end DeMarcus Lawrence on a long-term deal before the franchise tag deadline (March 5). First of all, the two sides were oceans apart last year, leading to Lawrence playing under the $17.1 million franchise tag this past season. And he didn’t do anything in 2018 with his team-leading 10.5 sacks, team-leading 12 tackles for losses and team-leading 39 quarterback pressures to deflate his value since his 25 sacks in the past two seasons represent the most by a Cowboys player since DeMarcus Ware had 31 in 2011-12. But please consider this: His agent David Canter is in no hurry to cut a deal. Why? Well, here is a list of the other noted pass-rushers hit with the franchise tag by Tuesday’s 3 p.m. deadline: Houston’s Jadeveon Clowney, Seattle’s Frank Clark, Kansas City’s Dee Ford and Atlanta’s Grady Jarrett. Agents are hesitant to set market value on long-term deals for their clients, fearing the next guy to sign a long-term contract gets a better deal. Remember the long 2015 stalemate with Dez Bryant and Demaryius Thomas? The two receivers frighteningly close to playing for the franchise tag both signed within 24 hours of each other with no more than hours before the deadline. Sit tight here.

Important Off-season For Cowboys Starts On Wrong Foot With DeMarcus Lawrence – Ben Grimaldi, Pro Football Talk Line
While the first franchise tag on Lawrence was not an issue for the player, a second definitely is.

Things have changed. Lawrence is no longer happy playing without the security of a multi-year deal. Even with the franchise number for Lawrence currently being over $20 million for the 2019 season, he still wants a long-term deal.

There are also rumors that he is delaying surgery on his ailing shoulder, perhaps until a deal is struck (or close to it). Since it seems awful childish for Lawrence to delay surgery in contract negotiations, let’s not deal with things we cannot be sure of, but hopefully, it isn’t true.

Dealing in reality, the Cowboys messed this up. The team could’ve signed Lawrence last year to a hefty long-term deal. It would have been expensive, but now they’re finding out it was much more expensive to try and get it done this off-season. The going rate for Lawrence was believed to be in the $17-20 million range last year, it is now suggested that Lawrence will command around $22 million per season, with more guaranteed money this time around. The Khalil Mack contract with the Bears and Tank doubling down with another outstanding season in 2018, made sure the cost of re-signing Lawrence was destined to skyrocket.

Tank and the Tag: 20 Cowboys questions and answers – Mike Fisher, 247 Sports
A useful primer on the ins and outs of the Lawrence situation. Here’s a sample.

3) Is the franchise tag “fair”? The salary paid to a tagged player — in Lawrence’s case, $20.53 million guaranteed for the 2019 assuming he is unable to negotiate a long-term deal by the July 15 deadline and assuming he agrees by the July 15 to sign the tag tender — is fair enough. But no, in yet another of the many collectively-bargained concessions this players union made to the owners, the tag is a bad deal for union members because it means free agents aren’t really “free.”

4) Is there hope of a long-term deal by July 15? Certainly. There is likely to be a great deal of bad blood between the two sides, yet Cowboys management entered talks two weeks ago with such optimism …

5) Is Tank upset? Sure. I think his camp believed the Cowboys when they said they did not intend on using the tag as a “weapon.” But Tank’s side is justified in looking at it that way now.

12 questions Cowboys must ask to not get burned in free agency – K.D. Drummond, CowboysWire
Another handy read for the coming free agency period.

How will he be used in your system, and are those same traits as attractive?

This is the mistake Dallas made with {Cedric) Thorton. He was a 3-4 two-gap player who the Cowboys signed him to a sizable deal to be a 4-3 penetrating player. That’s bad scouting. Other times, guys are asked to play the same roles as before, but still fail at it. That’s Nolan Carroll, who honestly failed when he was at his previous spot.

This is probably the reason why free agency is such a crap shoot across the league. From use, to fit – even techniques taught and required – there is so much change from one stop to another that it’s difficult to project what a player will do in his new environment.

FA Forecast: What’s Next For Cole Beasley? Rob Phillips, DallasCowboys.com
A look at some of the free agents from the Cowboys and what might happen. Spoiler alert: Cole Beasley is going to get some real interest from other teams, and it may trump whatever Dallas is willing to offer.

Making the Case: No one under contract on the current roster can match Beasley’s skill set as a shifty space player. He’s been a reliable option for quarterback Dak Prescott, he can return punts and he’s durable, having played all but one game over the past five years.

Forecast: The Cowboys want Beasley back, but their offseason to-do list is pretty full with possible extensions for Prescott, Cooper and others. Beasley, who turns 30 next month, has a window to maximize his earning potential now. Most likely he tests the market and sees how much interest he gets from other teams first.

Cowboys reportedly out on Earl Thomas, Landon Collins …but… – Patrik “No C” Walker, 247 Sports
This is a nice dose of reality about the reported “lack of interest” the Cowboys are showing in the free agent safety market. Remember that, along with lies, damnable lies, and statistics, pre-free agency rumors are one of the great classes of falsehoods.

If the Cowboys land no one in free agency, it will be because price is indeed everything, but certainly not be because they didn’t try. Owner Jerry Jones stated earlier this offseason the club would be in the market for a safety, and we could all simply be looking at free agency spin control, because if other teams know unequivocally the Cowboys and their hefty salary cap space are in the fight — they’ll toss the 14-ounce gloves and strap on the 8-ouncers. In the Watkins-Hurns situation of 2018, they swung hard at their top guy and landed on a less-expensive veteran, although they weren’t supposedly interested in attempting the former in the first place.

Waiting is the best medicine here.

Dallas Cowboys: Film room: Why the Cowboys should trade for Browns RB Duke Johnson | John Owning, SportsDay
Another rumor floating around is that the Cowboys may be interested in a trade for running back Duke Johnson to provide depth behind Ezekiel Elliott. But this one may have some real logic behind it.

One prospect who was frequently connected to the Cowboys at the time (of the 2015 NFL Draft) was Miami product Duke Johnson, a 5-foot-9, 207-pound back billed as an effective zone runner with an exciting skill set.

Fast-forward to the draft, and the only thing that may have prevented Johnson from dawning the star was Randy Gregory’s precipitous fall from top-10 pick to the late second round. Dallas couldn’t pass up the chance to select the most talented pass rusher in the class with pick No. 60.

Johnson was selected 17 picks later by the Cleveland Browns, and by the time the Cowboys went on the clock with their third-round pick (No. 91), all of the starting-caliber running backs were gone, forcing them to go in another direction.

Four years later, the Cowboys may again be capable of acquiring Johnson, as the team was rumored to be one of the parties interested in trading for the Browns’ backup running back. Because Cleveland signed Kareem Hunt last month, Johnson’s role should be severely diminished in 2019, which is why teams are inquiring about trading for him.

Should the Cowboys Use Their 2020 First Round Pick in 2019? ✭ John Williams, Inside the Star
The Cowboys have long relied on the draft as the primary tool to build their roster. But the Amari Cooper trade has left them short on ammunition this year. It also showed that they may be more willing to use future picks now to help the team. So could they dip into 2020 to help out this year?

As the Dallas Cowboys are in the early stages of roster building for the 2019 season and hope to make another run in the playoffs, they’ll be looking at all avenues to improve their roster. This includes free agency, the draft, and trades.

The Dallas Cowboys are a team that is close to contending for their sixth Lombardi Trophy and the front office looks ready to get aggressive in the player acquisition department with this young corp. So, with that in mind, should the Dallas Cowboys use their first round pick from 2020, to help their team this year?

The Dallas Cowboys officially announced on Feb. 28 that the future Hall of Fame tight end was preparing to end his one-year stay with ESPN’s Monday Night Football to return to the team for what will be his 16th season, anxious to play once again and well-rested from having a year in the broadcast booth. That has now been made official and the numbers on his deal are in stone following several reports of what his one-year deal would amount to. Witten will be paid a base salary of just $2 million in 2019, but can max out at $5 million if he hits all of his escalators — per Todd Archer of ESPN.

Report: Tony Romo Receives Sponsor’s Exemption To Play In Another PGA Tournament | 105.3 The Fan staff
Jason Witten may have un-retired, but forget any pipe dreams about Tony Romo joining him. The superstar analyst is living large and doing exactly what he wants.

The sponsor’s exemptions continue to roll in for Tony Romo as he will compete in the Corales Puntacana Resort & Club Championship in Punta Cana this coming March.

Romo, who doesn’t hold a PGA or Web.com tour card, received a sponsorship exemption to permit him to play in the tournament from March 28-31.

“Golf has been a passion of mine throughout my life, giving me another athletic outlet to hone my skills and compete,” Romo said in a release. “The opportunity to compete at the highest levels of golf, the PGA Tour event, was a dream come true for me. I’m thankful to the Corales Puntacana Resort & Club Championship for inviting me to join them once again this year, and I’m excited at the chance to compete against the best of the best.”