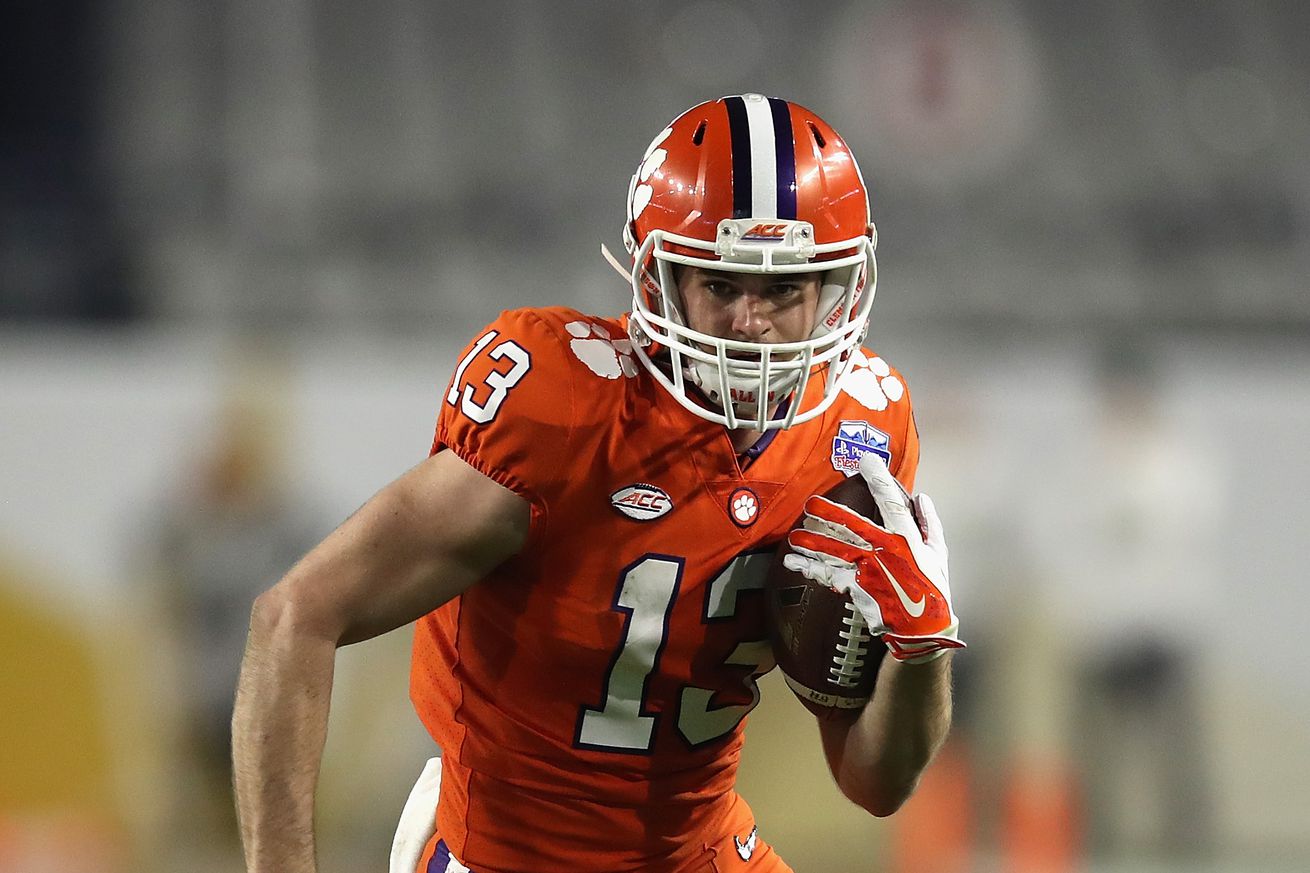 The Cowboys can find slot talent all over the place in the upcoming draft.

Free agency begins next week and the time will come to say goodbye to some of last year’s contributors. Most notably, the loss of slot receiver Cole Beasley appears imminent. Are the Cowboys going to shell out somewhere between $20-$30 million to retain the reliable pass catcher or will they look elsewhere to supplement his production? With so many other players demanding a big stack of cash, hanging on to Beasley just doesn’t seem likely. If he leaves in free agency, how are the Cowboys going to replace him?

Well, there are many different options all across the draft that offer the Cowboys talent at slot receiver. In fact, here are seven options, including at least one player for every pick the Cowboys have. [Players picked at those spots are typically guys who are much higher on the team’s board, but have slid in the draft. Some of these selections will be long gone by then, but we’re taking a “best case scenario” approach to land their new slot receiver.]

Not only is the Sooner receiver the best slot receiver in the draft, he’s one of the best receivers, period. He had 75 catches for 1,318 yards and 10 touchdowns last season and is a flat-out burner. A foot injury forced him to miss the combine, but he was projected to record the fastest 40-time. He’s not just a vertical threat as he can change his pace, keeping the defense on their heels. Brown is a good route-runner and is sharp out of his breaks.

Brown should be one of the top five receivers taken and shouldn’t last longer than midway through the first round. If the Cowboys get lucky and he’s still hanging around when they’re on the clock in the second round, Brown would be a steal. If you’re looking for a big time playmaker, look no further than “Hollywood” Brown.

Bottom line: He’s the only slot guy we’d give serious consideration to this early, but we don’t think Brown slides that far so the Cowboys should make other plans to acquire a new slot receiver.

This Minutemen receiver has 4.31 speed and gets off the line of scrimmage in a hurry. Isabella has excellent hands and does a great job creating space. With a 2018 résumé that includes 102 catches, 1,698 yards and 13 touchdowns, he’s been very productive in college. He’s a savvy route-runner and always seems to find the holes in the defense. He doesn’t have a very good catch radius, but what 5’10” slot receiver does? Whether it’s at the top of his route or down the field, he’ll get you with his feet.

Isabella may go off the board before pick 90 rolls around, but if he’s still there, he’d be worth giving serious consideration. Abusing the safety like this shouldn’t be allowed.

Isabella has his third score of the game as Ford finds him for a 42 yard touchdown this time. pic.twitter.com/T6jyF8303H

Bottom line: We’re not complaining if they land Isabella here, but he’d have to be at the top of their board and there should still great players to choose from at this point. Wait a tad bit longer.

A fundamentally sound receiver, Renfrow doesn’t show the explosiveness some of these other slot guys do, but he makes up for it with technique. He does a great job selling the deep route before sharply breaking off his route. His 4.59 speed is not going to scare anyone, but he knows how to find the creases. Renfrow has remarkable hands and will haul in anything thrown his way. He’s made a career out of digging out low-ball catches.

The Tigers product could be one of the sneakiest Day 3 gems in the draft.

re·li·a·ble – consistently good in quality or performance; able to be trusted.

Bottom line: I’m big on Renfrow and don’t see him lasting this long, but if he’s there – Cowboys Nation should jump for joy as they land their new slot receiver.

How about a couple of Bulldogs…

The Bulldogs receiver is both quick and explosive and is a threat to take it to the house anytime he touches the ball. He’s got a good build and isn’t easy to bring down. Hardman has great athleticism, but he doesn’t possess much of a route tree arsenal. Georgia just got him in space and let him do his thing.

Mecole Hardman is one of the most dangerous space players in the 2019 class #NFLDraft pic.twitter.com/wC6w5bBVuy

Godwin is a dangerous route-runner who has great burst out of his breaks, constantly creating space. Not only does he get separation, but he keeps it with his speed. He has great body control and has hauled in some impressive catches. Godwin accelerates to top speed in a hurry and has been a dynamic player for the Bulldogs. His size makes it hard to beat press coverage, but he wins consistently with twitchy feet.

Godwin spent a lot of time wide open, which is a Dak-friendly attribute, but even when he’s covered, he can still come down with the ball.

Bottom line: If patience has caused them to miss out on these other players, then scoring one of these Bulldogs with their compensatory pick would be great value here.

With lightning quick feet, Hart has excellent short-area quickness. His ability to speed up and slow down enables him to change direction quickly to lose defenders. Hart adjusts his pace and then shoots out of a cannon blowing by defenders. His 5’8” 180 frame may deter some possible NFL suitors, but those are the exact measurements of Beasley and we all saw him make it work.

•Cut off and contacted, Hart disengages by pressing the DB’s shoulder
•Jab steps with a head fake to open the DB’s hips
•Threatens space that requires the DB to overextend his his flip and shift his weight opposite of Hart’s break pic.twitter.com/N52v5EVDIy

Bottom line: Waiting this long means it gets a little harder to secure a sure-fire starter at the position, but Hart has the upside to pull it off.

Johnson gets good separation off the top of his routes. He has the speed to be a deep threat and the body control to make spectacular catches. Johnson gets off the line quickly and makes great adjustments to the ball. He’s got good footwork, reliable hands, and can be hard to corral in the open field.

Coming from a smaller school, his draft stock will take a hit because of weaker competition, but that could just mean he’s steal for someone. His 5’10” 183 pound frame mirrors that of Antonio Brown, who also got passed up for the same reason.

Is Diontae Johnson the next Antonio Brown? Johnson has unreal quickness and the ability to play inside and outside. Also has great footwork and quick twitch movements that result in YAC. Good returner. Size and lack of competition will push him down just like AB. -CS pic.twitter.com/2NVxsHm3DA

Bottom line: Teams are just taking a flyer at this point in the draft, but it’s hard not to like what Johnson could translate to with a little developing.

When do you think the Cowboys should pull the trigger on a slot receiver? Would you like to see any of these players in a Cowboys uniform next year?