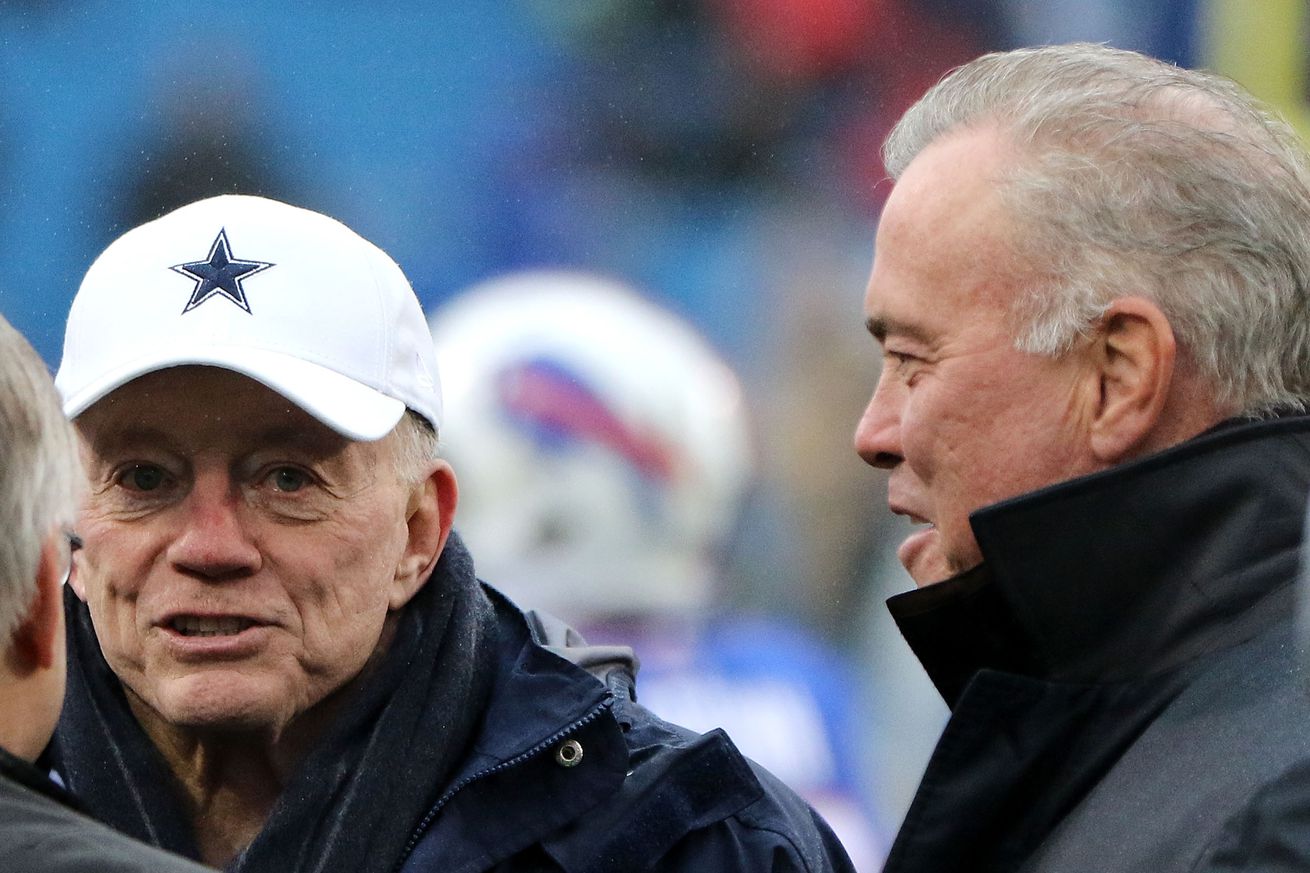 Plus, what shape are the Cowboys in going into free agency?

Caught at a financial crossroads, the Dallas Cowboys are on the clock to take a leap of faith – David Moore, SportsDay Dallas

The Cowboys will have a lot of decisions to make this offseason. Whatever route the team decides to take, it’ll cost some money. Either way, that will require Dallas to make a few risks and hope it pays off. David Moore explains the leap of faith that Jerry and Stephen Jones will have to make.

Dak Prescott, DeMarcus Lawrence and others will be paid, in part, on where they could lead the Cowboys. It’s a high-stakes projection that requires a leap of faith.

A correct assessment will reap dividends, regardless of how much the club distributes in the coming weeks and months. If club officials are wrong, well, that 24-year Super Bowl drought will continue with no end in sight and less financial freedom to adjust.

The beauty of one of the NFL’s youngest rosters, one that has won two division titles in three years, is that it generates hope for the future.

The harsh reality is the price of that future extends beyond the accomplishments of the present.

As free agency approaches, the Cowboys are in an interesting financial situation. They have some cap space to work with and not a ton of holes to fill, but there are also a lot of young players they’re going to need to re-sign in the next two years. It can be difficult to keep straight, but here’s a handy breakdown.

The Cowboys placed the franchise tag on Lawrence for the second consecutive season. The sides have until July 15 to work out a long-term deal. Dallas would like a deal that lowers the yearly cap hit below the $20.5 million franchise figure.

The Cowboys hold a fifth-year option on Elliott’s rookie deal and can push his free agency to 2021. A long-term deal with Elliott would almost assuredly surpass the four-year, $60 million deal signed by the Rams’ Todd Gurley last July.

The Cowboys and Lee have agreed to a deal to bring the veteran linebacker back on a reduced salary. Under the new deal, Lee’s salary cap hit drops to $6.5 million from $10 million.

The Dallas Cowboys will be players in free agency this year – Terence Watson, The Landry Hat

The Cowboys have ample amounts of money to spend right now, especially after the restructuring of Sean Lee. While Dallas hasn’t been a big spender for quite some time now, they have the option of doing that this year if they wanted to get a big name like Earl Thomas.

You might have noticed that I left wide receiver Cole Beasley out of the contract negotiations. That’s due to the fact that he has effectively priced himself out of what the Cowboys are comfortable paying him. As a replacement for him look for the Cowboys to re-sign receiver Tavon Austin to a team friendly deal and look for a permanent replacement in early in this year’s draft.

The only positions that are likely to garner attention for players outside of the team are a defensive end, defensive tackle, swing tackle, and safety. But with a deep draft at each of those positions don’t expect the Cowboys to come out guns blazing at the beginning of free agency and sign a big name. Expect more of the same from the Cowboys bargain bin shopping for players to fill holes after the draft.

One of the Cowboys’ expiring contracts is wide receiver and punt return specialist Tavon Austin, who missed half of the 2018 season with injuries but provided a spark when he did play. While nothing has happened yet, Austin is one name expected to be retained by the team.

I would expect Joe Looney and Allen Hurns to have their options picked up tomorrow or Monday. I’d also expect Daniel Ross and Tavon Austin to get locked in for next season, possibly as early as tomorrow.

It’s been discussed but on Saturday it became official: Sean Lee agreed to restructure his contract in order to stay with the team going into the 2019 season, and helping to save the Cowboys some cap room as free agency approaches.

The gang is getting back together in Big D.

Veteran linebacker Sean Lee is returning to the Dallas Cowboys for the 2019 season after agreeing to terms on a restructured deal, NFL Network Insider Ian Rapoport reported Saturday, per a source.

Lee will earn $3.5 million in 2019, but has the opportunity to earn his way back through incentives to the $7 million in base salary originally owed to him, Rapoport added.

The veteran linebacker, who has struggled with myriad injuries over his nine-year career, is turning 33 in July and coming off a 2018 season in which he played just seven games and lost his starting role to rookie Leighton Vander Esch.

Despite that, Lee said repeatedly this offseason that he wanted to play another year. Now, he will, but with a 50-percent haircut.

Replacing Cole Beasley: Slot receivers in each round of the draft for the Cowboys – DannyPhantom, Blogging the Boys

One of the Cowboys players with an expiring contract that seems more likely not to return in 2019 is slot receiver Cole Beasley. While there are several players in free agency that Dallas could target, as well as potentially Tavon Austin, there are several candidates in the draft as well, with options available in every round.

A fundamentally sound receiver, Renfrow doesn’t show the explosiveness some of these other slot guys do, but he makes up for it with technique. He does a great job selling the deep route before sharply breaking off his route. His 4.59 speed is not going to scare anyone, but he knows how to find the creases. Renfrow has remarkable hands and will haul in anything thrown his way. He’s made a career out of digging out low-ball catches.

The Tigers product could be one of the sneakiest Day 3 gems in the draft.

Bottom line: I’m big on Renfrow and don’t see him lasting this long, but if he’s there – Cowboys Nation should jump for joy as they land their new slot receiver.

The Cowboys franchise tagged DeMarcus Lawrence but are expected to continue negotiations towards a long-term deal, and depending on the market Dallas could also soon be negotiating with Earl Thomas. Joel Corry, a former agent, breaks down what these two defensive stars, and others, will likely be looking for.

Although Thomas turns 30 before the 2019 season starts, he was playing at a much higher level than either Kalil or Robinson were before their injuries. He was arguably the NFL’s best safety during the first quarter of the season.

Thomas’ expiring contract averaging $10 million per year made him the NFL’s highest paid safety when signed in 2014. Thomas reportedly trying to reclaim his place at the top of the safety pay scale isn’t surprising. Eric Berry is the current standard with the six-year, $78 million contract containing $40 million in guarantees he received from the Chiefs in 2017. He was 28 when he signed the deal.

Thomas’ deal may be affected more structurally than financially given his age, with teams beginning to take a more enlightened approach toward injured free agents. Topping Berry’s $40 million in overall guarantees seems less likely than his $13 million average yearly salary.

This Serena-Vika match is at such a high level already. Dak knows. pic.twitter.com/VU8EkkTisD