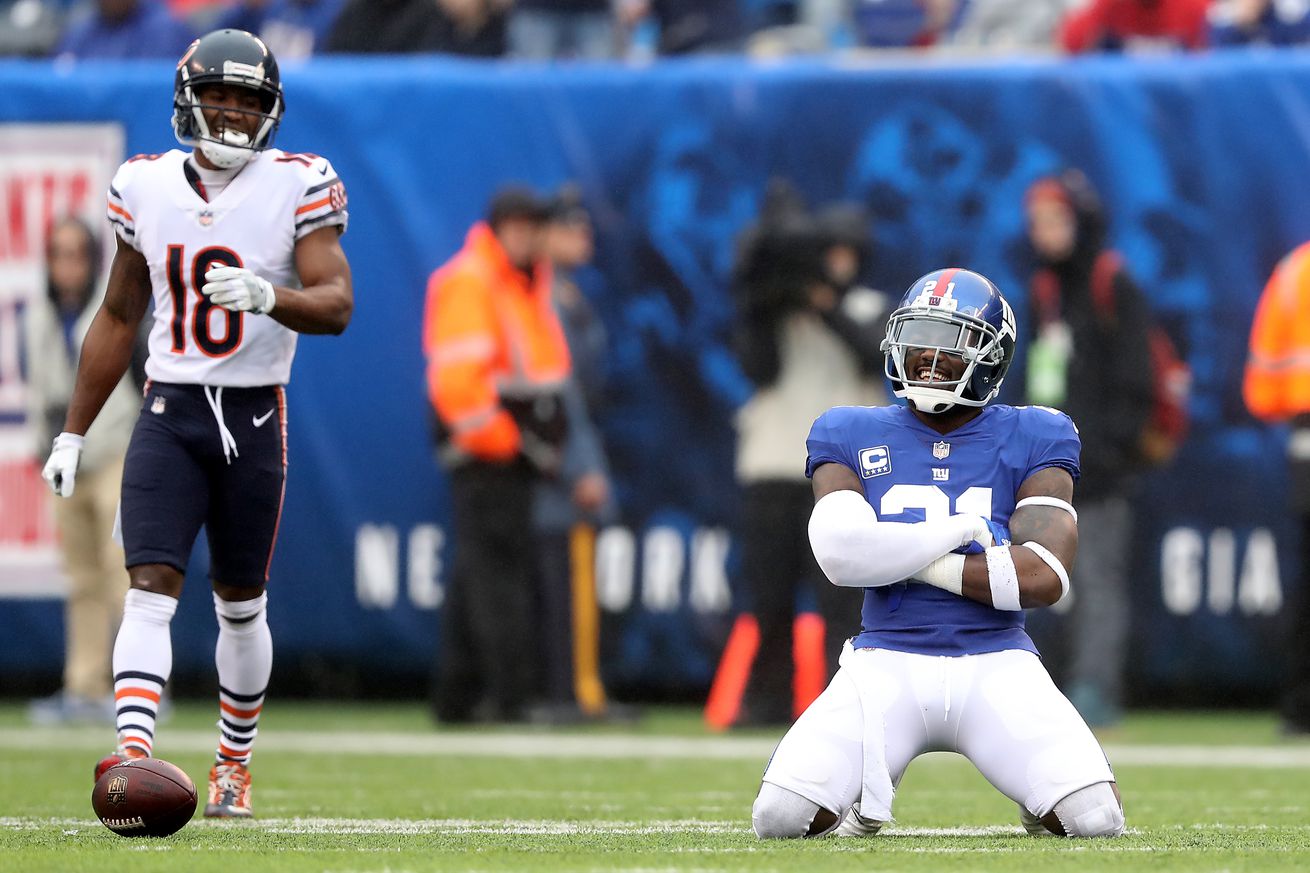 The New York Giants did not give safety Landon Collins the franchise tag, and a number of teams are reportedly interested in the 25-year-old Alabama product as a result.

According to Ian Rapoport of NFL.com, the Dallas Cowboys, Indianapolis Colts, Kansas City Chiefs and Washington are among those who could pursue Collins this offseason. He pointed out Washington’s interest may be predicated on it not re-signing Ha Ha Clinton-Dix, while Kansas City’s would be based on whether it made a move with Eric Berry.

So…. you’re telling me there’s a chance?

The Dallas Cowboys and Earl Thomas have been linked with each other for over a year, and now that the star safety is a free agent, it isn’t stopping.

Amid reports that the Cowboys aren’t pursuing a Thomas deal, Ian Rapoport of NFL.com reported Sunday that it’s not true and the Cowboys are still involved in the market for the former Seattle Seahawk standout.

Well, @RapSheet on NFL Network saying that the Cowboys are “by no means out” on Earl Thomas. So, the 49ers might have to win a bidding war.

There may be some nuance to this. It had been reported that the Cowboys aren’t interested in Thomas at his current asking price, but that may change if the asking price does. The two sides have reportedly met and it’s probably worth monitoring Thomas’s market and demands going forward in case something changes or becomes more realistic.

Five big-name free agent predictions that will have an impact on the Dallas Cowboys – Danny Phantom, BloggingTheBoys

With the Cowboys eyeing some of the bigger names in free agency, Blogging The Boys own Danny Phantom gives some predictions on moves that could impact the Cowboys.

Speaking of joining a division rival…

The New York Giants bid farewell to their All-Pro safety when they opted not to franchise-tag Landon Collins. The former Alabama star will now leave the Big Apple and immediately become one of the top safeties on the market. He will be coveted by many.

The Washington Redskins will be one of those teams. They need safety help real bad. They traded for Ha Ha Clinton-Dix last season, but he was just a seasonal rental as his contract is up and he also becomes a free agent. They also cut D.J. Swearinger for insubordination and just like that – the safety position is bare for Washington.

The Redskins will need to make cap space to make it happen, but they can get it done. So much for the Cowboys not having to face Collins twice a year. He’ll still be around, just in a different uniform.

The 1 Need Each NFL Team Must Address in the Draft, Not Free Agency – Derrick Klassen, Bleacher Report

The Cowboys will address some of their needs in free agency, but what is one position the Cowboys should look to the draft to address?

Depth is bleeding out of the Cowboys’ interior defensive line. Datone Jones and Caraun Reid are both set to become free agents this offseason, and David Irving is reportedly quitting the NFL. The Cowboys need to address their depth through the draft and hope to build those players up for the future.

Without a first-round pick, the Cowboys are going to need to look at less exciting options than they hoped for.

On the second day of the draft, Florida State’s Demarcus Christmas or Alabama’s Isaiah Buggs could fill the role of unmovable boulder next to more explosive options like Tyrone Crawford.

Ranking the Cowboys top five players; who lands where?

The Cowboys selected linebacker Leighton Vander Esch in the first round of the 2018 NFL draft. The pick was subject to criticism from all people: analysts, “draft experts”, and fans.

After a phenomenal rookie season, Vander Esch made everyone eat their words. The rookie sensation grabbed the reins when veteran linebacker Sean Lee went down with an injury. What could have been a big blow for Dallas’ defense, ended up providing the opportunity for the unit to get younger and faster?

Vander Esch recorded 102 solo tackles (140 total) in 2018. He ended the year as the third highest tackler in the entire league despite only playing the 36th most snaps among linebackers (754), per Pro Football Focus (PFF).

But Vander Esch is not just a run-stopping linebacker. He also excels at playing in coverage. Vander Esch grabbed two interceptions and also added seven pass deflections to his resume. To put that level of production in perspective, the entire defense only managed to intercept opposing quarterbacks nine times.

The young player, nicknamed the “Wolf Hunter”, is now a fan favorite of Cowboys’ nation. For years the Cowboys were one bad hamstring away from having a glaring weakness in the front seven. Heading into 2019, Dallas now has the best linebacking core in the NFL with Vander Esch’s consistency to hold the unit together.

Could the Cowboys turn to the mid-rounds of the draft to replace Cole Beasley if he leaves in free agency?

Penny Hart has shown the ability to play both out of the slot or on the outside, but will likely find most of his success in the NFL as a slot receiver. Despite being a small school prospect, he is surprisingly well developed as a route runner and understands how to temper his routes to create space and separation. This is a testament to his football IQ and work ethic.

Hart’s calling card is a short area quickness. He shows quick feet on film. It helps him quickly get off the line of scrimmage and also helps him when getting in and out of his breaks as a route runner. He accelerates and decelerates with ease, showing plus burst, and easily changes directions at the drop of a dime.

Looks natural catching the ball on film and shows the ability to extend to make catches thrown outside his frame. Rarely drops passes. Is a threat after the catch. He is slippery once he gets in the open field and has a little fight to him when he faces contact. Used as a “gadget” player on jet sweeps, reverses, and end-arounds. Also has special-teams experience as both a punt and kick returner.

Cowboys position series: Defensive backs had a solid 2018 season, but this lingering issue still held them back – Jon Machota, SportsDay

Heading into 2019, what is one thing the Cowboys DB’s need to improve on?

The Cowboys defensive backs had a good year as a group in 2018. The only thing that held them back was the same thing that has been the problem for the last few years: a lack of turnovers.

Despite not recording an interception, Byron Jones had a breakout season in his fourth year. New defensive backs coach Kris Richard chose last offseason to move Jones from safety to corner. The decision was a huge success as Jones routinely shut down the receivers he defended, helping him earn his first Pro Bowl appearance.

Chidobe Awuzie started 14 games at the other outside corner position. Anthony Brown started 10 games as the team’s third corner/nickel back. Jourdan Lewis, who was the team’s No. 4 corner, played in 15 games.

The safety position was led by veteran Jeff Heath, who started every game, and Xavier Woods, who started 14 games in his second season.

Dallas finished the year allowing 235 passing yards per game, 13th-best in the NFL. Opposing quarterbacks only threw 22 touchdown passes against the Cowboys’ secondary, eighth-best in the league.

10 things to know about Cowboys WR Allen Hurns, including his injury comeback and bond with his mother – SportsDay

With Allen Hurns to return in 2019, here are 10 thing to know about the Cowboys wideout.

You read that right. Hurns has a grass allergy which causes rashes on his skin. ESPN’s Michael DiRocco wrote about Hurns’ allergy in 2016, and said Hurns wears long tights and a long-sleeved shirt when on the field:

Hurns said he found out about his grass allergy by accident in high school. He was diagnosed with a seafood allergy and underwent skin testing from an allergist to see if he was allergic to anything else. Grass popped up, which explained why he would have rashes on his arms, legs and sometimes his neck after practices and games.

Hurns said he doesn’t experience breathing problems. His nose doesn’t get stuffy or runny either. He has skin breakouts that vary in degrees. Some days they’re barely there. Other days he said he has to take a Benadryl after practice or games if it’s a particularly severe breakout.