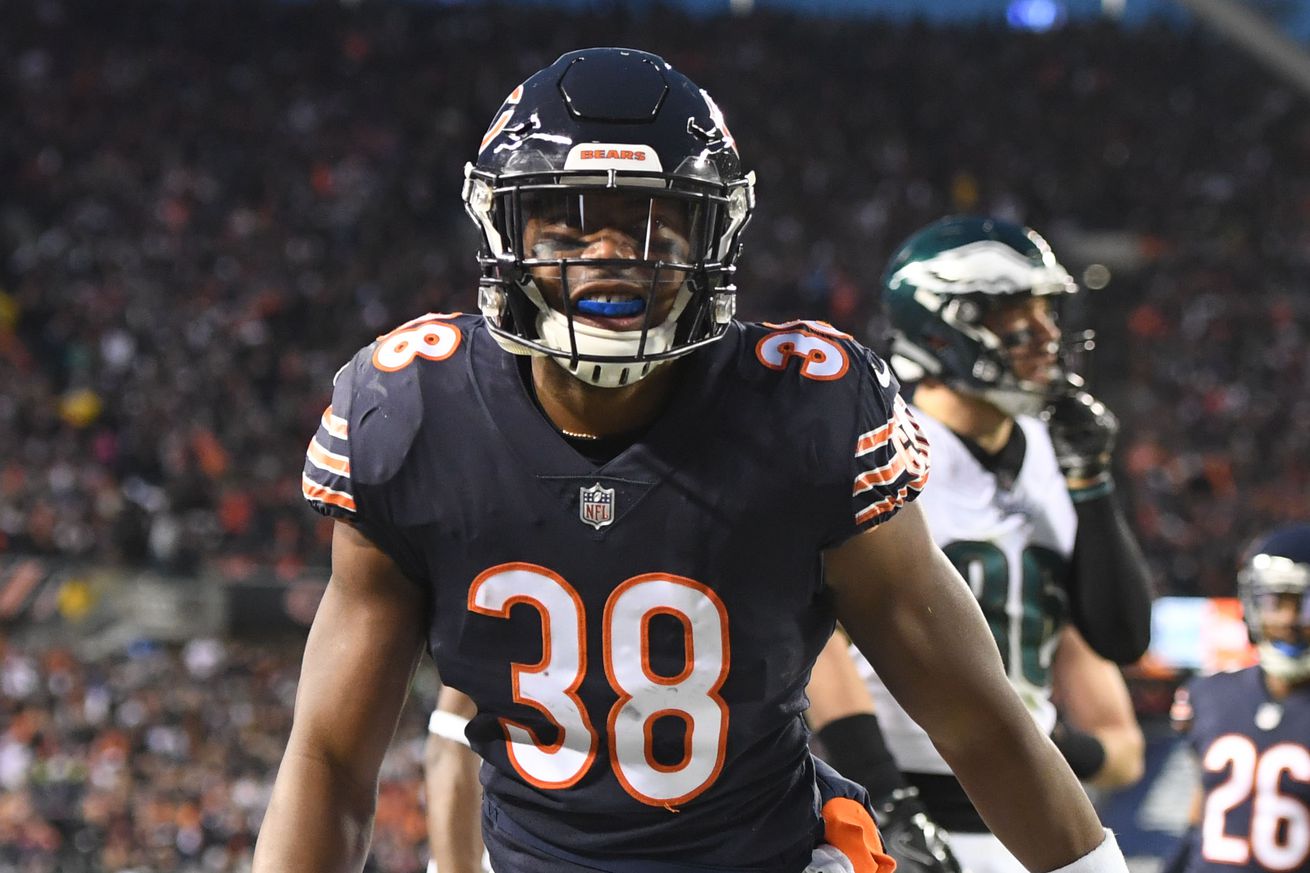 Should the Cowboys explore signing Adrian Amos instead of Earl Thomas, Landon Collins?

With free agency starting this week, the Cowboys will in some way be tied to a lot of the top names at safety. The position is flooded with talent in free agency and there will likely be some guys who fall through the cracks and whose market will be a little drier than expected. That is music to the Cowboys front office ears. While it’s likely the Cowboys will explore signing; Earl Thomas, Landon Collins, Tyrann Mathieu, and LaMarcus Joyner, maybe there’s another option available that could be cheaper, younger, and a healthier than the options listed above. (Landon Collins is signing with Washington).

Adrian Amos had quite the season for the Bears pic.twitter.com/IqzzS56bLZ

At 25-years-old, Adrian Amos has plenty of tread left on the tires after four years in the NFL with the Chicago Bears. Drafted in the fifth round of the 2015 draft, Amos has started 56 of 56 games played and has missed just four games over his four-year career. Experience? Check. Starting Experience? Check. Health? Check. Age? Check. Cost? That’s one thing that is still yet to be seen. Spotrac.com has his market value listed at $8 million average annual salary, which would put him in a tier below what the Thomas’, Collins’, and Mathieu’s of the safety world will likely demand.

When turning on the tape, there’s a lot to like from the 25-year-old safety out of Penn State. Let’s take a look and see what the tape shows.

There are multiple examples on tape of Adrian Amos covering tight ends, running backs, and, at times, receivers out of slot. Amos is a very physical player when pressing at the line of scrimmage. He plays with fluid hips and clean footwork when working in and out of his backpedal.

Adrian Amos in man coverage against George Kittle in the redzone.

As you can see from the clip above, Amos does an excellent job of eating up the cushion between George Kittle and himself while also not coming down hill to aggressively. Manning up on George Kittle while giving a 10-yard cushion is a tough task, but Amos does a tremendous job here carrying Kittle all the way across the field and to break up the pass to save the touchdowns.

If Amos is a tick late reacting to this, or gets hung up on the Ertz seam this is likely a TD for Sproles. Instead, just a 4-yard gain. pic.twitter.com/aeJFExCsix

Here is another example of Amos covering running back Darren Sproles out of the backfield. He does an excellent job of seeing the play develop, reading and reacting, and holding Sproles to only a 4-yard gain. If Amos doesn’t react as quick as he does, or gets caught up in Ertz running up the seam, this play has a chance to go for six.

One of his best traits is his ability to see the play developing before it does and fly to the football/ball carrier before anyone sees it developing. Amos is consistently weaving through holes to step up and cover wide outs, or make plays on the football. The Cowboys have yet to find a safety to patrol the back end of their secondary that plays with great instincts, and Amos would be an upgrade in that area of the game.

4th and 2 for Minnesota with time running out.

Adrian Amos ends the Vikings season. Dallas hasn’t had a playmaker at safety like Amos for some time. pic.twitter.com/DYIOqW4dCm

It doesn’t get much better than this from a instinctive standpoint. To see this crosser developing from across the field and to be able to break this up on 4th and 2 with the game on the line is tremendous. These types of plays are something the Cowboys have missed from their secondary in recent years.

Impressive instincts from Adrian Amos to see this developing and to be able to wrap Diggs up in the open field.

Here’s another play of Amos showing off his reaction skills by making a play on the Stefon Diggs’ shallow crosser. The amount of distance that Amos covers on these two plays shows off his athletic ability, sideline-to-sideline range, and his ability to be a playmaker without putting up insane turnover numbers.

Impressive click & close and read &react skills from Adrian Amos to break up the pass to Golden Tate. pic.twitter.com/g8mdF52xvj

Last but not least, we have Adrian Amos breaking up a pass in the NFC Wild Card game against the Philadelphia Eagles. Like the two plays above, Amos does an excellent job of reading, reacting, exploding off his back foot, and breaking up the pass without drawing a flag for pass interference.

While most of his highlights are making plays on the ball, Amos showed enough as a playmaker at or around the line of scrimmage to think he could play down in the box consistently in Dallas. With Xavier Woods also having a skill set that would allow him to play down at the line of scrimmage, that would give Dallas two interchangeable safeties that can play both up and down at different times.

In everything Amos does, he does it very fast and with a ton of effort. Whether it’s coming downhill to lay the wood on a ball carrier, flying downhill to breakup a shall crosser, or shooting a gap to make a play on a running back, Amos is always going at 110%. Here you’ll see him time up and shoot the gap perfectly to bring down Jamaal Williams for a minimal gain. Along with his speed and change of direction on this play, Amos shows great upper body strength to bring Williams down with a little help from his defense.

Here’s another example of Amos bringing down Bills’ running back Chris Ivory at the line of scrimmage. Again, he does an excellent job of shooting the gap, squaring up to Ivory and wrapping up his legs for the tackle. These are the types of plays that don’t show up in highlight videos, but make a huge difference on game days.

Adrian Amos would add needed versatility, athleticism, and playmaking ability to a position that desperately needs upgrading alongside Xavier Woods. While Earl Thomas, Landon Collins, or Tyrann Mathieu would be nice, adding a younger, healthier, more versatile, and likely a bit cheaper player on a defense that already has it’s main core players set would be a great addition to a Cowboys defense that has lacked play making ability from Jeff Heath’s spot in 2018.

Would you like if the Cowboys signed Adrian Amos in free agency, or would you rather them go a different route?