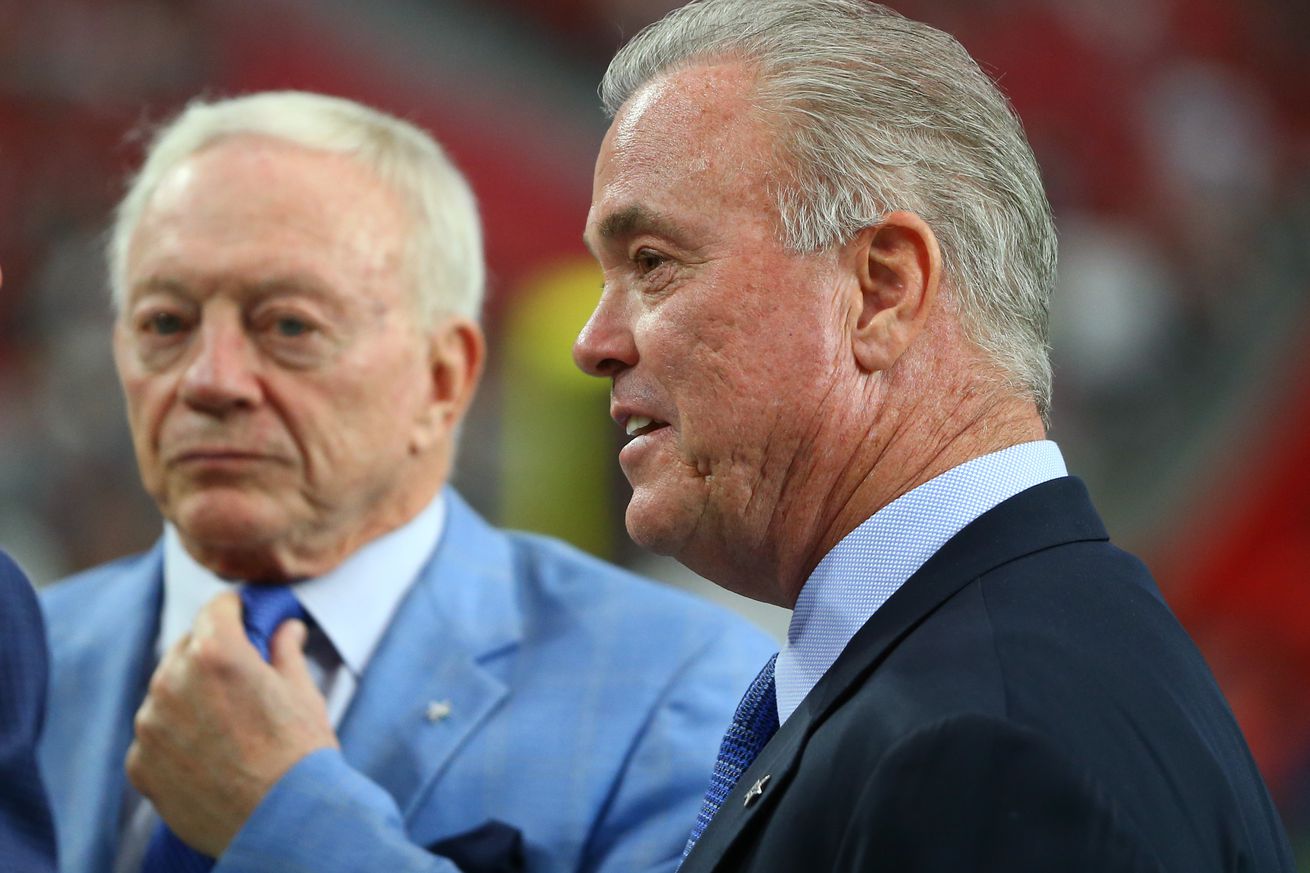 The Cowboys have been very quiet during the legal tampering stage of free agency but they are not.

If you’ve been an active purveyor of the NFL’s social media landscape, you are likely aware that the Cowboys’ fan base is a bit restless. That’s because Dallas is one of four NFL franchises to not have participated in the legal tampering period before the start of free agency Wednesday afternoon. It’s become the Cowboys’ M.O. under the more tight-pocketed Stephen Jones.

Maybe it’s because Stephen is scarred by the many times in the past that he was forced to make acrobatic maneuvers with the salary cap. For about the last five years or so, the Cowboys have been near the bottom in free agency spending. Instead, they have spent the majority of their resources on extending their own players and drafting well. It’s a method that many owners would tell you is the best practice, in a perfect league. The problem is that we don’t live in that perfect league where one way is the proven way.

For the Cowboys and Stephen Jones, free agency is not as fun as it may be for other teams. Right now, the Cowboys are having a tough time trying to work out extensions for some of their top talents, namely DeMarcus Lawrence.

As we saw previously with the Dez Bryant negotiation, the Cowboys refuse to be the first to set a positional market. Lawrence, arguably the best 4-3 end in the NFL, is currently on a $20M franchise tag. Lawrence has made it clear to the Cowboys that he will not sign that tag, so the two have until mid-July to work out a long-term extension or we can expect a holdout. Unfortunately, we’re hearing whispers that Lawrence felt disrespected by the first offer that was somewhere closer to last year’s franchise tag he received. The Cowboys are looking to protect themselves but Stephen Jones will have to accept that you can’t pay last year’s prices in a league where the cap significantly increases each year.

If you look at all the teams that went wild with spending over the last few days, they are mostly teams that missed the postseason in 2018. The most active shoppers like the Jets, Raiders, and Browns have been struggling for several seasons. The struggling NFL franchises need free agency because those clubs are under loads of pressure to raise attendance, merchandise sales, and revenues all across the board. Those teams must spend in free agency because they need significant upgrades in their on-field product. That means bringing in a household name or two that has the résumé to put some excitement back in the fan base and help that team out of the doldrums.

Free agency is a competition and the Cowboys refuse to participate in bidding wars with teams throwing cash around. If the Cowboys are not willing to pay market value for any outside free agents, they will not attract many outside free agents, and especially the ones that are top-tier. You couple that with losing a productive slot receiver in Cole Beasley on a deal that was significantly larger than the amount Dallas was willing to give and this fan base is on edge. The Cowboys are one of the youngest franchises in the NFL with cap space to spend but have not joined the party:

Various Cowboys social media platforms have been on Earl Thomas watch for the better part of a calendar year but he’s now cross off that list, headed to the Ravens

With each rumored terms that are agreed upon between top free agents and destinations everywhere except Dallas, it just adds fuel to the frustrations. In their defense, the Cowboys can benefit from a little patience while they wait out other teams to finish their spending sprees but the frustrations are warranted.

Owner Jerry Jones said that the organization has an increased sense of urgency to win.

“That’s really fair and that’s real,” he said. “This is my 30th combine and I don’t have 30 more. I’ve made them all and it’s a big thing to evaluate and put the team together, so I’m running out of combines. So it’s more urgent than it was sitting here visiting with you 20 years ago. So yes, it is more urgent.”

Someone should forward these sentiments to Stephen Jones and get everyone in the Cowboys organization on the same page. The Cowboys have plenty of time to do anything they would like to do but relying on low-cost signings and a draft where they only have two picks in the Top-100 is not going to move the needle very far. Dallas may have been a playoff team last year but they have so much to improve upon. It doesn’t mean they have to sign every high-priced free agent but they should at least make competitive offers for potential impact players and stop limiting themselves to the bargain bin.

Stephen Jones doesn’t have to be the wildcatter his father was but the organization could benefit from a little compromise in his philosophy. Right now, the Cowboys will say they’re working on extensions for their own but no such talks are taking place with the organization being so far apart from its players in negotiations. Spending like crazy in free agency hasn’t always translated to success for the Cowboys but neither has the method they are currently implementing.