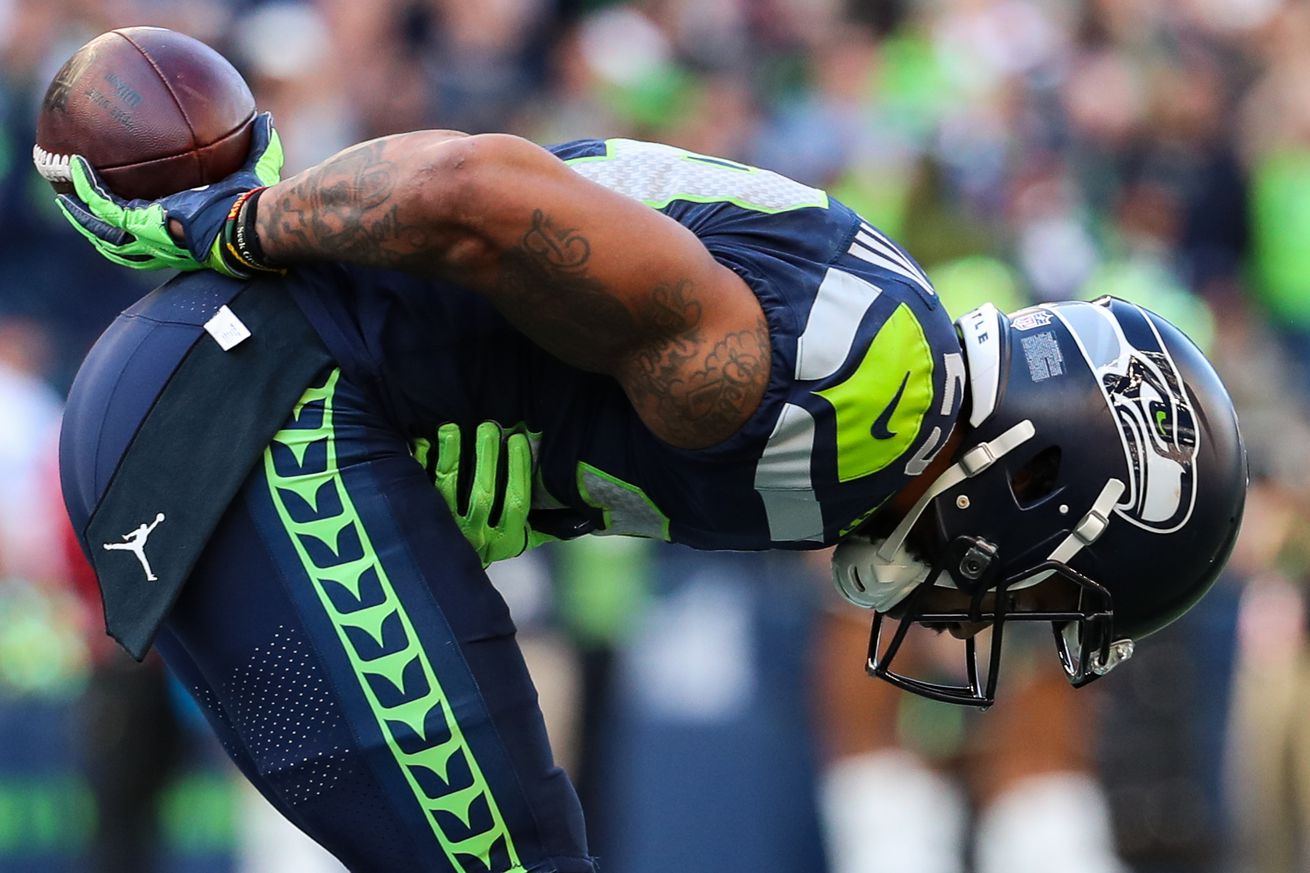 So is Eric Berry the new free agent safety crush?

Report: Earl Thomas To Sign With Ravens | 105.3 The Fan staff
It is done. And it was almost certainly the price tag that ended hopes for Cowboys fans.

The Cowboys dream of signing Earl Thomas is officially over as he will sign with the Baltimore Ravens, according to Adam Schefter.

Thomas agreed to sign a four-year, $55 million deal that includes $32 million guaranteed with Baltimore, per Schefter.

2019 NFL Free Agency Grades: Ravens earn ‘B+’ for Mark Ingram, ‘C+’ for Earl Thomas, Jets get ‘C+’ for Le’Veon Bell – Pete Prisco, CBSSports.com
While the hearts of many Cowboys fans broke when news of ET signing with Baltimore came out, some are questioning just how smart a move it was by the Ravens.

This one is perplexing to me. Thomas has been a great player, but he turns 30 in May and he’s had some injury issues. Yet the Ravens are giving him a reported $32-million in guaranteed money on a four-year deal.

They probably wanted to get faster than what they had in veteran Eric Weddle, but Weddle brought a lot of special qualities to the defense. I am not a big fan of this move.

Cowboys To Investigate Health Of Eric Berry | Josh Clark and Mike Fisher, 105.3 The Fan
Now that the Thomas dream has vanished like morning dew in August, many fans are desperately hoping someone else can fill that aching void in their hearts. News of Eric Berry’s release has brought new hope, but he is a player with just three games played in the past two years.

The Dallas Cowboys will investigate the health of Eric Berry after he was released from by the Kansas City Chiefs on Wednesday, according to 105.3 The Fan’s Mike Fisher.

Because of Berry’s 2014 battle with Hodgkin’s lymphoma (in remission), and his recent injury issues, his case warrants a lot of research to be done, according to Fish.

PFF’s top-25 remaining free agents in 2019 | NFL Analysis | Pro Football Focus staff
With Dallas still looking for an upgrade at safety, it is somewhat comforting to see that four of them are on this top-25 list. And look who is their highest rated:

Injuries have kept Berry form being the Berry we all know and love for the past two seasons, but he’s too talented when healthy to leave off the top-five section of this list. In 2016, Berry earned an 89.9 overall grade across 1,151 defensive snaps in KC.

Star Evaluation: Figuring Out Heath’s 2019 Role – DallasCowboys.com staff
The intense interest in free agent safeties that the Cowboys might sign is driven by the desire to upgrade from Jeff Heath as a starter. While Heath has some great attributes, and is an ace on special teams, there is a downside to him in the starting role.

What’s Been Bad: It wasn’t all the time, but Heath did have some struggling moments, particularly in a game against the Lions, where Golden Tate had a couple of big plays on Heath. For the most part, he was solid, but the Cowboys weren’t a great team in getting takeaways. For all the time that Heath is around the ball, you’d like to see him get more than one interception. He had just one forced fumble and no recoveries.

The 4 stages of NFL free agency, explained by a former player – Geoff Schwartz, SBNation.com
Schwarz went through free agency as a player, and his insights are worth noting. The Cowboys almost always skip the first stage, where the big contracts get handed out. And just because the second stage is now underway, it doesn’t mean you can expect a lot of action in Dallas right away.

After this big run of free agents, which are often being signed by teams not in the playoffs, there comes a second wave of players who sign about a week after this tampering period. These are players who will make the team, add depth, and could be starters. They are coming off an injury or might have underperformed, but they still have talent.

These deals are typically one or two years and for a decent but not hefty price. The players typically take a few visits and feel out the situation. They have similar offers and are looking for the best fit.

Wilson, 25, entered the league as a selection by the Dallas Cowboys in the fourth round of the 2015 NFL Draft — making him the 13th linebacker taken out of his class. He signed a four-year, $2.74 million contract with the Cowboys in 2015.

Interestingly enough, just as current Chief and former Cowboy Anthony Hitchens was required by coaches during his time in Dallas, the Cowboys made Wilson learn all three linebacker positions.

Cowboys re-sign fullback Jamize Olawale to a three-year deal – Dave Halprin, Blogging The Boys
And everyone says the Cowboys are not active in free agency . . .

OK, re-signing FB Jamize Olawale may not be seen as important at all, but there are some subtexts to note.

Now that Kellen Moore is running the offense, there were questions about how he would use a fullback, if that was even in his plans at all. The re-signing of Olawale should answer those questions, especially since it is a three-year deal.

Olawale does add value on special teams. He played on 63% of the special teams snaps in 2018. That was second to Damien Wilson, who is departing for Kansas City. Olawale’s special team’s abilities obviously played a role in his re-signing.

Cowboys free agency: Dallas reportedly bringing back Cam Fleming – R.J. Ochoa, Blogging The Boys
A lot of people will also be less than enthused about the Cowboys re-signing swing tackle Cameron Fleming to a two-year deal, but in truth this checks an important box for them.

This is great news for a team in the Dallas Cowboys that has a left tackle in Tyron Smith that has dealt with injuries in recent memory. Tyron is the best in the league when totally healthy, but if he’s not ready to go you can’t have your quarterback’s blind side vacant. Fleming helps ensure that that is not the case.

According to NFL Network’s Mike Garafolo, the deal is worth up to $8.5M. That’s not bad to help yourself sleep better at night knowing things are solid on the left side.

But Lee understands the economics of the business. He knows the size of the investment required to keep Lawrence and wants to do all he can to make it happen.

“He’s such an incredible player and a guy we all feed off,” Lee said. “He’s extremely important to the defense, down in and down out.

“It goes beyond his pass rushing ability. It’s what he does against the run. It’s how he’ll run screens down when the play is 20 to 30 yards downfield.

“We all understand how important he is. Having him is huge for us.”

Did The Giants Just Make The Browns Super Bowl Contenders? | Josh Hermsmeyer, FiveThirtyEight
Finally, if your spirits need a little lift after all the ET stuff, here is an analytical look at how the New York Giants stunk it up with their trade of Odell Beckham Jr.

The trade definitively signals that the Browns — just a year removed from a winless season in 2017 — are legitimate contenders for a playoff berth, if not a Super Bowl appearance. (Yes, we just used the words “Super Bowl” and “Browns” in the same sentence without a hint of irony.) The Giants — seemingly rudderless under the stewardship of GM Dave Gettleman — appear committed to a complete top-to-bottom rebuild.

Unfortunately for the Giants, it is difficult to rebuild when you trade away your single best asset for less than what he is worth. According to Eric Eager at Pro Football Focus, the package of picks and Peppers that the Giants received in exchange for Beckham is worth approximately 1.85 wins above replacement over the next four years. That would be a solid haul for most players, but Beckham was worth 1.95 WAR in 2018 alone.

Draft pick value is heavily influenced by whether a team selects a QB, and the 17th pick would be worth substantially more on paper if the Giants were to select an heir apparent to Eli Manning — a decision that’s largely viewed as a no-brainer to everyone outside the confines of East Rutherford, New Jersey.1 The value of the 17th pick falls from 1.6 WAR all the way to 0.75 WAR if any position other than quarterback is taken. And that’s much more likely as New York already holds the sixth overall pick, so if the Giants do decide to select a quarterback in the draft, they’ll almost certainly take one there. Peppers, a former first-round pick and high school standout from nearby northern New Jersey, was worth 0.62 WAR a year ago — and has a cumulative career WAR of 0.53 when you include his negative WAR rookie season.