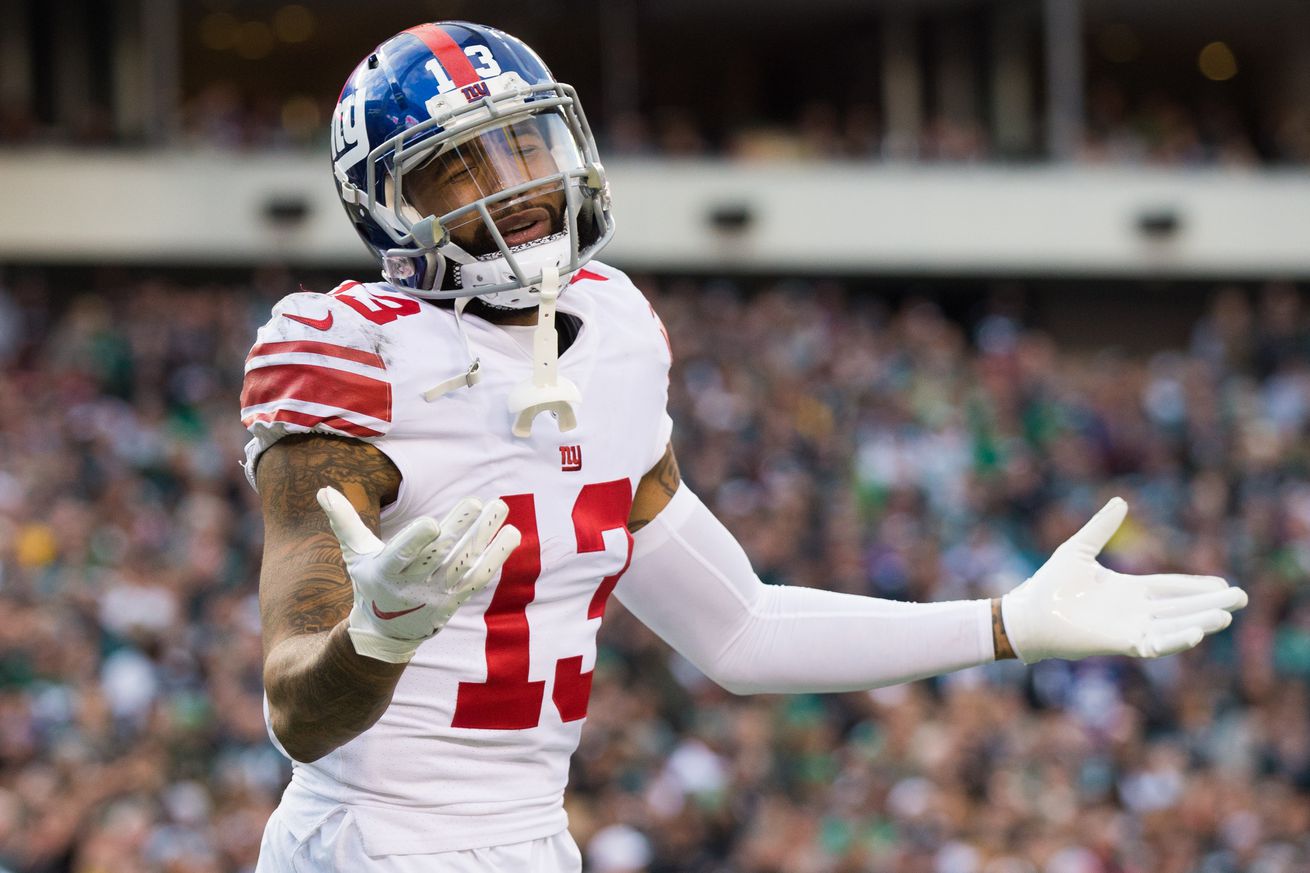 Dallas Cowboys owner Jerry Jones thanks Giants (over and over again) for trading Odell Beckham Jr. to the Browns – Matt Lombardo, NJ.com

Jerry often tells us how he really feels. He made his feelings about the Giants moving Odell Beckham Jr. outing of the division no secret.

There might actually be a bigger fan of the Giants’ trade that sent Odell Beckham to the Cleveland Browns than Baker Mayfield.

Bizarro World: The Giants are lost while the Browns are the NFL’s new darlings – Michael Lombardi, The Athletic

The former NFL GM says the Giants “are lost”.

Go back to Gettleman’s first press conference for the answer. At that conference, Gettleman maintained Manning was still a Pro Bowl caliber quarterback and that he had not seen any decline in his play. Gettleman came in to repair the team, not rebuild the team, and that’s when all the problems started.

While the Browns finally evaluated the quarterback position correctly, the Giants continue to lie to themselves, which is why these two teams are heading in opposite directions. Still believing in Manning has forced the Giants into one mistake after another, while finding Baker Mayfield has turned Cleveland into the darlings of the NFL. Who would have ever predicted this five years ago?

And Giants fans, don’t count on the NFL draft to provide a solution at quarterback. Numerous people have reported to me that the Giants are not in love with any of the 2019 rookie quarterbacks. Which means all that Ohio State’s Dwayne Haskins-to-the-Giants talk is just talk.

Sports Sturm’s Weekend Riffing: Why all is quiet on Cowboys front, and which DFW team has brightest future? – Bob Sturm, The Athletic DFW

Sturm explains why the Cowboys have been quiet thus far in free agency.

Because of big deals for their own players — Tony Romo, Jason Witten, DeMarcus Ware, etc — the Cowboys began to place a premium on keeping their group together, willingly dealing with cap issues and kicking the can of expenditures down the road to make it all fit.

They were able to keep the band together. But when a team spends all of its resources internally, its only way to improve is through the draft. The conveyor belt would keep turning, and they would often put together some decent enough rosters.

But two things have eluded them ever since. Free agency participation to find those final big pieces (which often are a mirage) and postseason success. Whether these two items are tied together so closely is open for debate, of course. But if you cover this team for a living, you seldom have big news in March like so many other franchises seem to get every year.

They still have a few weeks left, but the clock is ticking.

Where does the NFC East rank among the divisions?

The NFC East got a lot worse this week, and that’s because one of the biggest superstars in the NFL left.

New York Giants general manager David Gettleman traded Odell Beckham Jr. to the Cleveland Browns, shocking everyone around the league. Instead of trying to build around Beckham and running back Saquon Barkley while looking for a future quarterback, the Giants decided to deal Beckham and rebuild from there, upsetting Giants fans everywhere.

The Dallas Cowboys retained talented 26-year-old pass-rusher Demarcus Lawrence on a second franchise tag but have stayed relatively quiet in free agency. Meanwhile, the Philadelphia Eagles have been active, re-signing Brandon Graham and Ronald Darby while also trading for one of their former stars in wide receiver DeSean Jackson.

Washington may have made the most strides in the division this past week, trading for quarterback Case Keenum, re-signing Adrian Peterson and bringing in All-Pro safety Landon Collins.

Unfortunately for the division, the Beckham trade outweighs Washington’s improvements.

Would Cowboys trade Joe Looney if the Saints came calling? – Brian Martin, Inside The Star

With Max Unger’s decision to retire, could the Saints try making a move for Joe Looney?

With Frederick set to return to the Cowboys starting lineup in 2019, Looney suddenly becomes nothing more than a backup C/G once again. Because of that, he could become expendable, making him an intriguing tradable asset for teams looking for a starting caliber offensive lineman with versatility to play any interior position. This could be exactly the kind of player the Saints are targeting.

Unfortunately for New Orleans, they don’t have a lot of draft capital in the 2019 NFL Draft to find a starting caliber center. Like the Cowboys, they don’t have a first-round pick this year and don’t make their first selection until the second-round. After that, they don’t have another draft pick until the fifth-round. This further complicates replacing Unger as well as trading for anyone, such as Joe Looney.

It’s highly unlikely the Saints are willing to part ways with their second-round pick and the Cowboys would probably want more for Joe Looney than a fifth-rounder. Looney after all has proven to be a serviceable starter, which is probably more valuable for Dallas considering the unknown about Travis Frederick’s health moving forward.

After being quiet during the first wave of free agency, will the Cowboys make a move in week two?

Are the Cowboys in Play for Eric Berry?

The Dallas Cowboys have been pretty quiet in free agency. In fact, the only external free agent they’ve signed is defensive tackle Christian Covington, who comes over from the Houston Texans.

This wasn’t the way things were supposed to go for Dallas. The Cowboys had been linked to free-agent safety Early Thomas since late in 2017. Thomas, however, signed with the Baltimore Ravens and left Cowboys fans without a fresh playmaking safety.

Dallas fans, though, may still have a shot at that safety. The Kansas City Chiefs released Eric Berry after adding Tyrann Mathieu. According to Mike Fisher of 247Sports, the Cowboys are “investigating” Berry’s health.

Berry has played just three games over the last two seasons because of injuries, but he’s also a three-time All-Pro. Will the Cowboys take a chance and make Berry their first big move of free agency? If so, it would change the complexion of Dallas’ defense.

Will the Cowboys go defensive tackle with its first pick?

Saunders brings major one-gapping talent on the inside to Dallas’ defense, exactly what it needs.

Some potentially concerning news regarding one of the draft’s top prospects.

Mississippi State defensive end Montez Sweat, who rose to the national spotlight with his performance at the Senior Bowl and on the field in Indianapolis at the 2019 NFL Scouting Combine, has medical news that may make some teams do an in-depth analysis.

Multiple sources say that combine doctors took a thorough look at Sweat because of a pre-existing heart condition. This was not publicly known before Indy.

In the past, combine doctors have prevented players from participating because of health concerns, including sending one player home this year. Ultimately, the combine deemed his condition low-risk and cleared Sweat to participate.