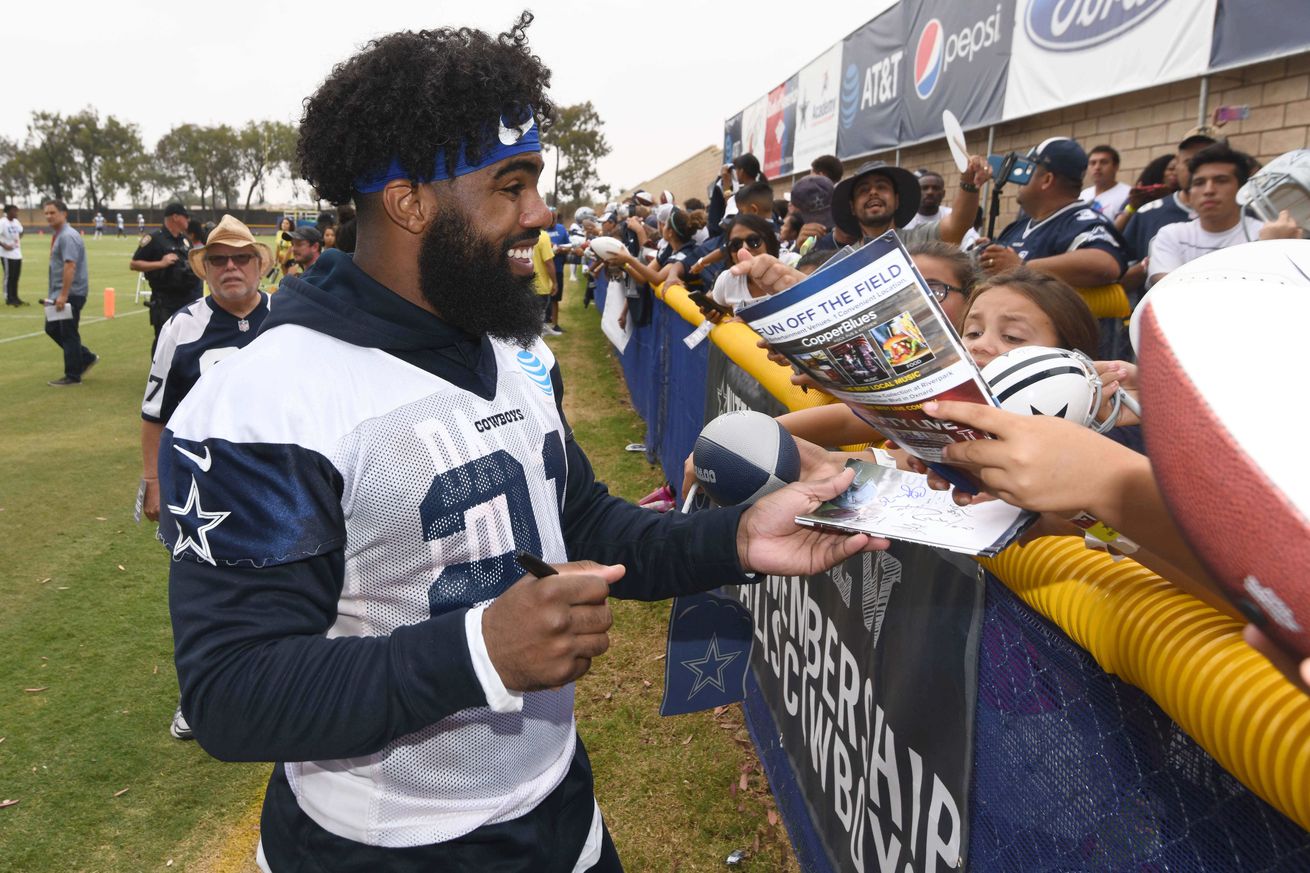 The Cowboys are stirring in free agency.

Hyder, a three-year player from right here in the Lone Star State at Texas Tech, had a career year for the Lions back in 2016: 36 total tackles, 11 tackles-for-loss, and eight sacks in a 4-3 scheme.

The former undrafted free agent missed the 2017 season due to a torn Achilles and he was unable to build on his productive second season in Detroit. After making six tackles and a TFL last season, the Austin native hit the market this offseason.

Hyder is a player that can see a resurgence in Dallas after not fitting in Matt Patricia’s scheme with the Lions. The Cowboys have a need along the defensive line, and pass rushing is always welcomed in Rod Marinelli’s room.

Cowboys host free agent WR Randall Cobb, S Clayton Geathers and will visit with S Eric Berry Tuesday – Staff, SportsDay
In addition to signing Hyder the Cowboys brought in some others for official sit downs and visits and such, including safety Clayton Geathers.

The 26-year-old was a team captain with the Indianapolis Colts last season. In four years in the NFL he has played in 41 games accounting for nine passes defended, two forced fumbles and 183 total tackles.

In 2018, Geathers had 89 total tackles in 12 games. He had eight tackles against Dallas when the two teams played on Dec. 16 in Indianapolis’ 23-0 win. He has had issues remaining healthy, and dealt with lingering knee and neck injuries last season.

The second week of free agency looks to be more eventful than the first for the Cowboys.

Five days after he was released by the Kansas City Chiefs, Eric Berry is expected to visit with the Cowboys on Tuesday. The five-time Pro Bowler is widely regarded as the best available free agent safety – a position of need on this Cowboys roster.

Berry is looking for his second NFL team after an amazing career in Kansas City. The former top 10 draft pick is talented, to be sure. He earned Pro Bowl honors in 2010, 2013, 2015 and 2016, and he has been a three-time All-Pro. He’s credited with 51 pass breakups and 14 career interceptions, including four picks during the 2016 season.

How Long Do NFL Contracts Really Last? We Now Have an Answer. – Danny Heifetz, The Ringer
And if you’re frustrated by the Cowboys’ aggressively conservative approach to free agency, consider these realities: most of the players signed to big money contracts this year will last only one or two seasons with the teams that handed those contracts out.

This breakdown shows that more than half of five-year contracts lasted just two or three seasons and more than half of four-year contracts lasted for either one or two seasons. Free agents who signed deals of three years or longer from 2011 to 2015 were more than three times as likely to be released (72 percent) as they were to finish the deal (21 percent). The odds of signing a contract extension (5 percent) are only marginally higher than the odds of retiring before the deal ends (2 percent). The following chart shows players who signed either four- or five-year deals but were off the team after one full season.

Khalil Mack Trade Given Best Transaction Award by Analytics Group – Rob Goldberg, Bleacher Report | Latest News, Videos and Highlights
So, the slide rule and abacus crowd at Sloan Analytics zigged when others zagged and awarded the best transaction in all North American major sports to the Oakland Raiders for last year’s dump of Khalil Mack. Who knew?

It’s generally wise to be suspicious when the insta-judgments found on Twitter and sport talk stations all universally praise or pan a move. Remember the conventional wisdom on the Amari Cooper trade?

The Sloan Sports Analytics Conference at MIT gave out its annual Alpha Awards on Monday and the Mack trade was named the Best Transaction throughout the year in the entire sports world. The Raiders received four picks in the deal, including two first-round picks.

The Chicago Bears were happy about being on the other side of the trade, adding a player who eventually racked up 12.5 sacks and was named first-team All-Pro.

After missing the playoffs for seven straight seasons, Mack helped Chicago post a 12-4 record and win the NFC North in 2018. The squad finished with the best defense in football in points allowed.

However, the Raiders were surprisingly the ones honored for the transaction.

As Michael David Smith of Pro Football Talk noted, the Raiders likely wouldn’t have been competitive anyway and analytics suggest ”tearing teams down before rebuilding” (like the Philadelphia 76ers) is the best course of action. The move helped add assets while saving cap room for a team that didn’t need a high-priced linebacker.

Are the Cowboys considering trading up in the 2019 NFL Draft? Let’s dig into that theory – Kevin Turner, The Athletic
Meanwhile, Kevin Turner puts his investigative cap on and thinks the Cowboys may be looking to move up in April’s draft. His basic proposition is the if the Cowboys bring a player in for a visit, they’re interested. And the players the Cowboys’ have brought in thus far aren’t going to be available when the team picks at the 58th spot.

Ferguson is the all-time sack leader in Division I college football history and Dane’s 49th ranked prospect. Abram is a very talented strong safety ranked 37th on Dane’s prospect list. Meanwhile, Willis is a Day 3 prospect who I’m not incredibly high on, but I can see why the Cowboys might be interested in him as a developmental player on the defensive line. He has some off-the-field questions as well, which might be easier to get to the crux of in a pre-draft visit setting.

You can read all about Jonathan Abram here; I wrote about him in detail last week.

Among their first four reported national pre-draft visits, three of the players are not expected to drop to pick 58. I’d guess Abram, Ferguson, and Rapp would be selected closer to 30 than 60.

Knowing that the Cowboys have a solid roster and two fourth-round picks to go with their third-rounder at pick #90, could Dallas be thinking about moving up to grab a player they need who might not make it to them at No. 58?

Gallup exactly who the Cowboys hoped he was, with more on horizon – Bob Sturm, The Athletic
The Sturminator doing his thing, this time with an exhaustive look at wide receiver Michael Gallup’s rookie campaign. Come for the endless number of gifs; stay for the 2,500+ of analysis.

There is no doubt the Cowboys left plenty on the field and there is no doubt his QB struggled to find Gallup for a while after the Cooper trade. The third-round receiver can get better and better as his career develops, but after examining every one of his 2018 targets, I left feeling great about Gallup’s future.

He is dynamic, versatile, fearless, and quite productive. I expect plenty from him moving forward and I assume we will look back at his initial 500-yard rookie season as a drop in the bucket as he blows by those numbers in the future.

The Cowboys were fortunate to have someone like this on the board when they made their third-round selection last year. I suspect it is only going to get better from here. I am quite encouraged by just about everything I saw. Clean up a few rough edges and develop further chemistry and they have a legitimate outside threat who is ready to take his next leap forward in 2019.

Tyron Smith Is Still Going – David Helman, DallasCowboys.com
Helman continues the Mothership’s review of key veterans and reminds us all that Tyron Smith is still a force of nature.

What’s Been Good: Eight years into his career, Tyron Smith continues to chug along as one of NFL’s best players – and arguably its best offensive linemen. It’s a telling indicator of Smith’s reputation that 2018 was viewed as a down season for the veteran tackle, and yet he allowed zero sacks in 15 total games – 13 regular season appearances and two playoff games. Injuries and age may have taken a toll on Smith, and it’s amazing to realize the guy is still just 28 years old after being drafted No. 9 overall in the 2011 NFL Draft. Despite that, Smith earned his sixth straight Pro Bowl nod in 2018 and helped anchor a Dallas offensive line that was thrown off by injury throughout the year. According to Pro Football Focus, Smith’s pass blocking efficiency graded out at 98.5, and he allowed pressure on just 3.1 percent of his snaps. For all the talk about Tyron Smith’s supposed decline, he’s still playing at a heck of a high level.

Success rate tells a somewhat different story, with lower success rates when facing big deficits, perhaps because these teams are taking more shots deep down the field on their play-action dropbacks. Because trailing teams usually need big chunk plays to get back in the game, we probably shouldn’t take this as evidence that play-action should be abandoned when teams are trailing. Play-action is most effective when a team is ahead, but still effective — as measured by yards per play — when a team is trailing.

Giants GM: Idea Eli is overpaid, can’t play a ‘crock’ – Herbie Teope, NFL.com
If nothing else, New York GM Dave Gettleman has been a consistent source of entertainment for fans of every team in the NFC East not named “Giants”. His latest comedy routine included one-liners about Eli Manning being worth the team’s cap investment.

The 38-year-old Manning will count $23.2 million against the Giants’ cap this year, according to Over the Cap, and he comes off a season where he was sacked a career-high 47 times behind an inconsistent offensive line.

New York also recorded a second straight losing season with Manning under center, but Gettleman isn’t putting the blame fully on the signal-caller.

“At the end of the day, when you blow the whistle, 11 guys got to go out there, OK?” he said. “I’ve done that study. And on offense you got to have a quarterback around. OK?

“And again, I said it in Indianapolis and I’ll say it again, you turn around and take a look at what happened last year, once we got that O-line fixed — it looked better, we’re going to continue working on that — and look at what we did the second half of the year on offense.”

The Giants went 4-4 down the stretch, a span where Manning threw 13 touchdowns against five interceptions, to finish with a 5-11 season, so Gettleman clearly liked what he saw.

Former Seahawks DL Malik McDowell visiting with Dallas Cowboys – Mookie Alexander, FieldGulls.com
Lastly, another typically under-the-radar poking of the tires by the Cowboys at a once-promising player looking to make his way back to the NFL. McDowell was a former second-round pick of the Seahawks who suffered a head injury his rookie season and hasn’t played snap in the NFL.

McDowell suffered serious brain injuries after an ATV accident in July of 2017. The Seahawks didn’t declare McDowell as unable to play at all in that season until late November.

Last year, the Seahawks waived McDowell with a non-football injury designation. He was subsequent placed on the team’s reserve/non-football injury list, so he was indeed still a part of Seattle’s roster throughout the 2018 season. Earlier this month, McDowell was waived again, this time making him a free agent.