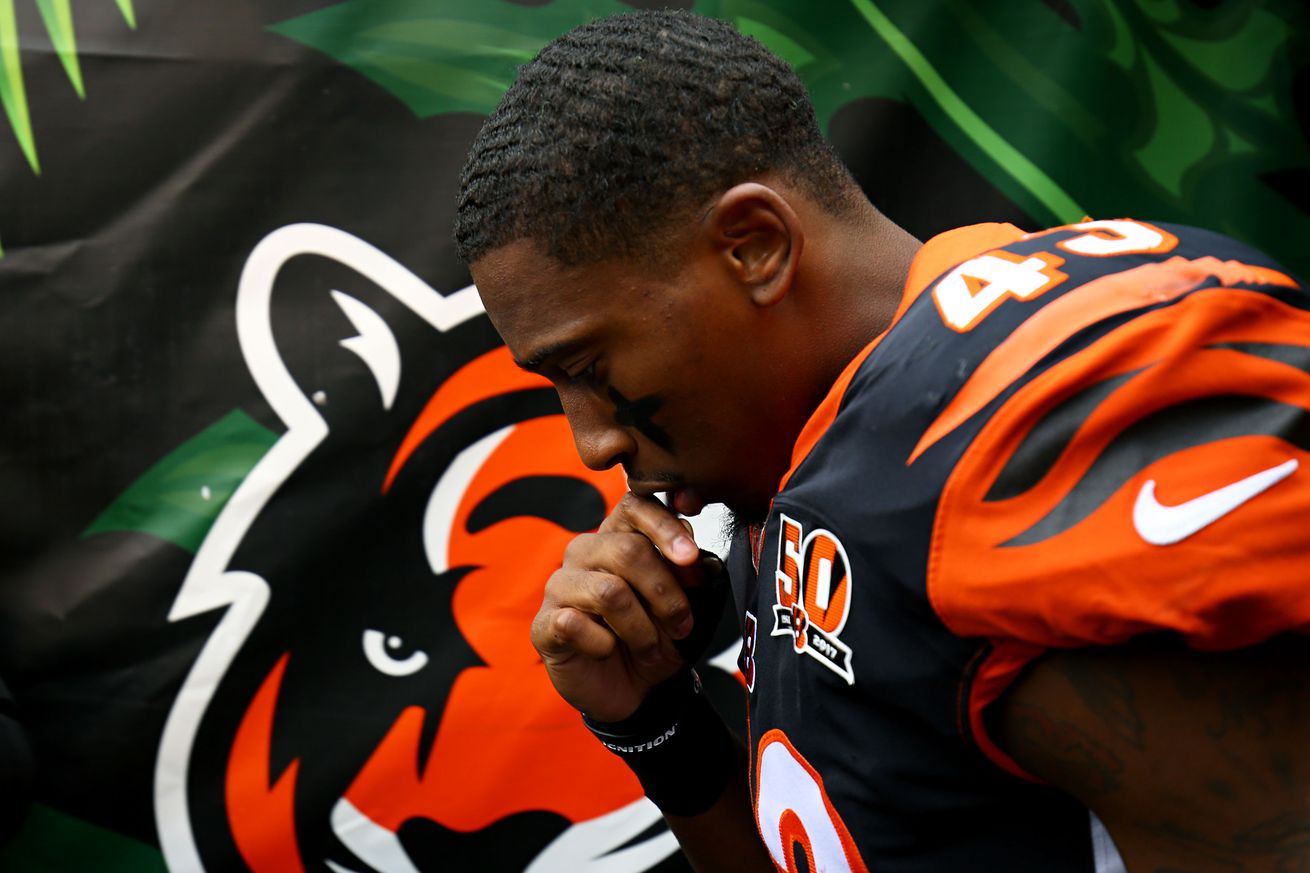 All the Cowboys news is here.

They’re expected to visit with free agent George Iloka, a seven-year veteran who started three games for the Vikings last season. In the past week the Cowboys have also visited with free agent safeties Clayton Geathers (who has since re-signed with the Colts) and Eric Berry.

Iloka, 28, was a starting strong safety for the Bengals in six of his first seven NFL seasons. He has 359 career tackles, 32 pass breakups and nine interceptions.

Another safety visit: Cowboys to host veteran George Iloka this week -Tyler Dragon, SportsDay
The Cowboys have met with Clayton Geathers and Eric Berry and now they will meet with George Iloka, the 28-year-old safety spent time with the Bengals and Vikings.

Iloka becomes the third safety to visit The Star this week. The Cowboys brought in free-agent safeties Eric Berry and Clayton Geathers earlier this week in an attempt to shore up the back end of their defense.

Geathers has since re-signed with the Indianapolis Colts and Berry is still being wined and dined by other clubs.

Iloka spent last season with the Vikings after signing a one-year contract with the team. He played in all 16 contests primarily as a backup. His best years as a pro came in Cincinnati. He started at strong safety for the Bengals from 2013-2015 before switching to free safety in his last two seasons with the team from 2016-2017.

The Cowboys will meet with free-agent safety George Iloka on Friday, according to a source. Iloka had a recent visit with the Oakland Raiders. He played for the Minnesota Vikings last year, starting three games after a six-year run with the Cincinnati… https://t.co/tmvGzh6qwA

Dallas’ vision here is to continue the current negotiations that are stalemated with DeMarcus Lawrence and agent David Canter, hoping to eventually use Tank and Quinn as defensive front bookends. The Cowboys are careful to explain it that way because they don’t wish for Lawrence and the agent (with whom the Cowboys presently have a prickly relationship) to come away with ruffled feathers.

Nevertheless, Quinn can be both an addition to Tank when he signs and insurance against Tank if he doesn’t.

In the most optimistic and simplistic way, the envisioned “plan” would be for long-time sack-master Quinn to play right end and for Pro Bowler Lawrence to man his familiar left end spot, where he is uniquely productive as an all-around performer (thus Dallas’ use of the $20.5 million tag to maintain contractual control while the parties face a July 15 deadline to get a long-term deal done).

No news is good news (sort of) for the Cowboys on Eric Berry and Robert Quinn – Dave Halprin, Blogging The Boys
All’s quiet with a couple of Cowboys targets.

When Robert Quinn left Dallas on Tuesday, it was widely reported that the New Orleans Saints were also in contention for his services. It was assumed that Quinn would be on his way to New Orleans to talk deal. Turns out, that assumption was wrong, at least for the time being.

It has also been reported that the Dolphins are okay with receiving a 2020 draft pick instead of a 2019 pick. That is important for Dallas who are kind of short on firepower in the 2019 draft.

The fact that Quinn didn’t go to New Orleans, and that they are reportedly the only other team in the bidding right now, is another piece of good news for the Cowboys in the pursuit of Quinn. As long as Dallas is the only place he has visited, you have to consider them the front-runners to get his services.

David Moore: It’s hard to envision a scenario where he won’t be back. Lawrence is one of the league’s top defensive ends. He’s relentless on the field. He plays through injuries. He’s respected by teammates and coaches.

If the club doesn’t sign him, what message does that send to everyone else in the locker room? What does it do to a defense that has spent years building to this point? It would undercut everything ownership and coach Jason Garrett say they value. The Cowboys will sign Lawrence, and it needs to be done sooner rather than later.

The club can’t afford to go down to the deadline the way it did with Dez Bryant when he was on the franchise tag. Too many rifts, too many questions develop the longer this remains unresolved.

Randall Cobb: “I still got something to prove” – Lindsay Cash-Draper, Dallas Cowboys
Randall Cobb jumps from one historic organization to another and he hopes to prove that he’s got plenty to give the Dallas Cowboys in 2019.

And a piece of that success he’s after will go through his new QB1, Dak Prescott. Cobb noted he hadn’t met any of the guys yet, as he saw a handful of them putting in work on the practice field three stories below. One exception, though, Dak Prescott. They spoke through some text messages and Cobb sent him a ‘gif’ showing his excitement.

“He was excited. We talked for a little bit, he’s excited to get started and get to work. I’m looking forward to building a bond with him, and making plays on the field,” Cobb said.

Cowboys, Rams get preseason date in Hawaii – Lindsey Thiry, ESPN
The rumors have been confirmed as the Cowboys-Rams preseason game will take place in Honolulu, Hawaii!

The Los Angeles Rams and Dallas Cowboys will play a preseason game in Hawaii on Aug. 17, the Rams announced Thursday.

The game will take place in Honolulu at Aloha Stadium, which served as the longtime home of the Pro Bowl until the exhibition game moved to Orlando, Florida, in 2016.

The Rams and Cowboys squared off in the divisional round of the playoffs last January. The Rams defeated the Cowboys 30-22 on their way to a Super Bowl LIII appearance.

The NFL has the power to discipline under the personal conduct policy.

According to the police report, a fight ensued between patrons and bar security, causing police to respond to the scene. An arriving officer reported that security and bar patrons “were both aggressors in this altercation.”

Police said they were unable to view what initiated the dispute on the in house security video because it took place in a blind spot to cameras.

Crawford, a seven-year veteran, is a team captain and is one of the Cowboys who did a ride-along last fall with the Grand Prairie Police Department as part of the team’s attempt to engage with policing in the community.

Examining Cam Fleming’s deal could indicate Cowboys see a potential Collins replacement- K.D. Drummond, CowboysWire
If you follow the money, the Cowboys might be looking at Cam Fleming to replace La’el Collins following the upcoming season.

According to Over the Cap, Fleming’s contract is a one-year deal with a club option for 2020. The option has to be invoked prior to the start of the 2020 league year. Fleming got a $1.5 million signing bonus, which for cap purposes is spread out over both years of the deal.

For those doing the math at home, that leaves $6.25 million of maximum cap hit in 2020. Ladies and gentlemen, that’s mid-level starting right tackle money.

Our NFC East rivals were trying to mess with us, but they got slapped down.

The Eagles made a proposal to have the Lions and Cowboys stop hosting every Thanksgiving and instead have to play on the road on some Thanksgivings. They then withdrew the proposal, presumably because it wasn’t going to pass.