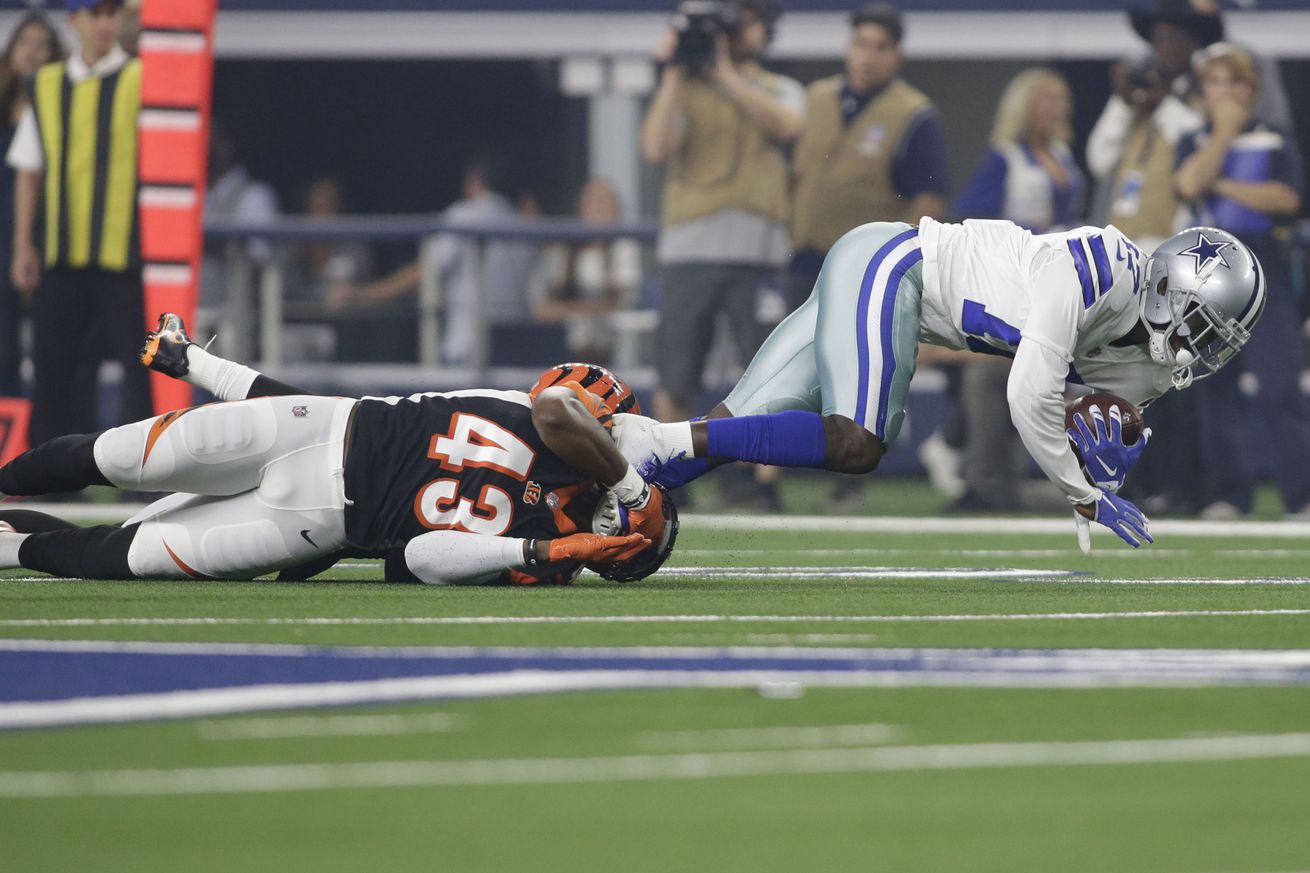 What does the Cowboys’ newest toy bring to the defense?

Measuring in at 6-foot-4 and 225 pounds with 34.5-inch arms, Iloka, who was the college teammate of Cowboys offensive coordinator Kellen Moore, has a unique size and frame for a safety. Despite his size, Iloka has spent a lot of his time playing in both box and deep safety roles thus far in his career, showing likable traits in both areas.

When covering deep zones, the 28-year-old plays a conservative style, as he’ll sacrifice the ability to make plays on the ball to get enough depth so that he doesn’t get beat deep. To his credit, Iloka does well as the last line of defense. He rarely let’s receivers get loose deep.

In fact, Iloka actually displays some impressive range from deep zones. Here’s one of the better displays of his range from the deep middle:

Iloka potentially fills a need in the back-end of the defense in Dallas.

The addition of Iloka ends a dramatic 10 days for the Cowboys, who made it no secret that they were trying to land a safety in free agency. As a matter of fact, back in February, Cowboys executive vice president Stephen Jones made it clear that he thought the team needed to add more depth at the position.

”You’ve obviously got (free safety) Xavier (Woods) who we’re thrilled with — young, up and coming,” Jones said, via the team’s official website. “Of course, Jeff (Heath) is doing a great job holding the down safety down, but then it’s a little thin after that. Kavon (Frazier) was a late-round pick who was a good special teams player who can certainly play the down position. But I think we need to look at that position.”

Also, it turns out that this was meant to be:

How does FanSided grade the move?

For a number of seasons, the 2012 fifth-round pick of the Cincinnati Bengals was regarded as one of the more underrated players at his position. And it was certainly a bit of surprise last offseason when the team opted to make a financial decision and release the heady defender after six years in the Queen City. He would head to Minnesota and be reunited with Mike Zimmer, who was his defensive coordinator with the Bengals his first two years in the league. As a reserve with the Vikings this past season, Iloka played in all 16 games but made just three starts. He finished with a mere 11 tackles on defense, but did add five stops and a forced fumbles on special teams. You can expect him to be a lot more active in ’19 and challenge Jeff Heath for a regular job.

The Cowboys have added Iloka, but should that end their flirtation with Eric Berry?

While the signing of Iloka was a smart one for the Cowboys, they shouldn’t be content at the position. For years, safety has been a problem in Big D and they need to do all they can to get it fixed.

While there’s a chance Iloka can come in and prove to be an upgrade over Jeff Heath, there’s also a chance that won’t be the answer. Or, they may not see the leap in production from Xavier Woods who has been developing the past two seasons for them.

Adding a veteran like Berry helps to ensure they will have playmakers at a position that has been a huge weakness for the past half-decade, or longer.

Some have talked about how Iloka will impact the defense, but how will Randall Cobb make the offense better?

Cobb might not have as many targets or yards as Beasley had, but he will open up things for other receivers. That is the key to making a threatening receiving core: finding players that complement each other and allow versatility.

An underrated part of Cobb’s game is that he can be used as a gadget guy. He can run jet sweeps, catch bubble screens, and line up in the backfield. All of these skills can be used by offensive coordinator Kellen Moore to do different things with the same players.

The Cowboys signed Cobb and resigned receiver Tavon Austin. Now, they have four receivers with true speed, not just quickness. And when Prescott scrambles, he has a veteran that has racked up plenty of yards on off-schedule plays.

Is there a chance that the Cowboys upgraded at receiver?

Last week, Dallas Cowboys fans had to say goodbye to a fan favorite. For the last seven years, Cole Beasley had been a fixture on the roster. Often under-utilized due to his place on the pecking order, Beasley nevertheless provided a much needed security to both Tony Romo and Dak Prescott.

When the Buffalo Bills came calling, however, the Cowboys simply could not match the price tag of $29M over four years with $14.4M guaranteed. With Prescott, Ezekiel Elliott and Amari Cooper all due for extensions and DeMarcus Lawrence still not signed long-term, Beasley was now a luxury and no longer a necessity.

Who can the Cowboys target late in the draft?

Top running back Darrell Henderson is not the only explosive offensive player coming out of Memphis. His teammate, Tony Pollard, is also a devastating big-play threat.

Pollard’s role at Memphis was more ambiguous than Henderson’s. Henderson was a true running back with some receiving responsibilities, but Pollard was a do-it-all player who lined up all over.

He does not excel at any one thing, but he can play a variety of roles at a baseline level. As such, he could be found in the backfield like a typical running back, in the slot as a receiver or even taking the snap as a wildcat quarterback.

He was also a fantastic kick returner, as he returned seven kicks for touchdowns on 87 career attempts.

Will the Cowboys make a move for a pass rusher?

The Cowboys might be receiving some pass rush help.

As the team still works toward a long-term deal with DeMarcus Lawrence, reports surfaced this week that Dallas was in the market for another playmaking defensive end — Robert Quinn.

From SportsDay’s David Moore: “The Cowboys’ pursuit of defensive end Robert Quinn has nothing to do with the club’s current impasse with DeMarcus Lawrence. It has everything to do with Randy Gregory’s uncertain future and Taco Charlton’s regression. Quinn spent most of Tuesday at The Star before leaving to visit New Orleans. Since he remains under contract to Miami, this tour is confirmation a deal is imminent. The only question is which team gains his services?”