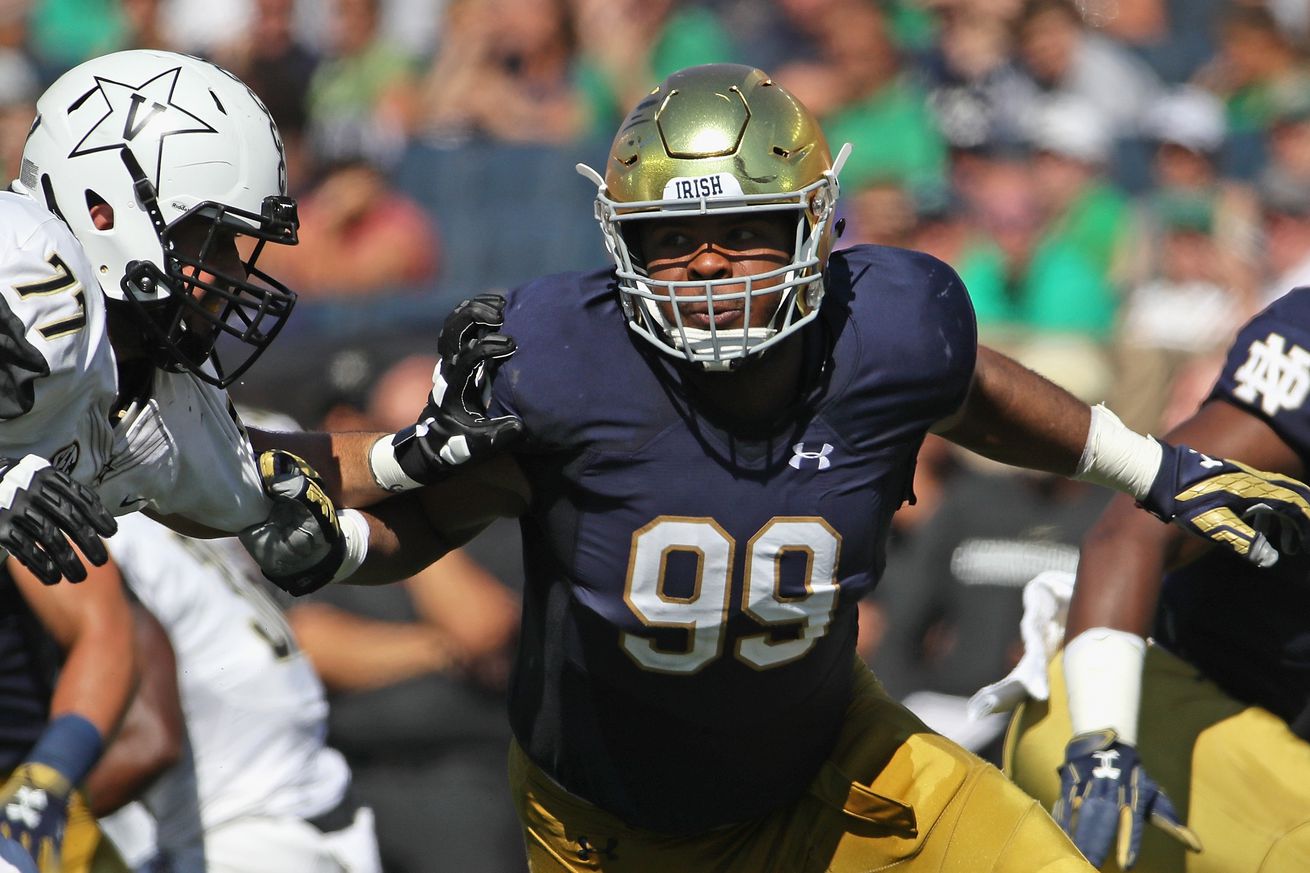 The Cowboys could use some help in the interior defensive line.

The Dallas Cowboys need to strengthen the defensive tackle position. With David Irving gone and both Maliek Collins and Antwaun Woods on the last year of their contracts, the team will need help in this area soon enough. Christian Covington was added in free agency, but the Cowboys need a big playmaker in the middle of the trenches. The upcoming draft offer a lot of talent at the defensive tackle position and there will be some good choice available even as late as pick 58.

Yesterday, we looked at three possible safety targets for the team’s second round pick. We chose a “long-shot” player (Taylor Rapp), a “hold your breath” player (Jonathan Abram), and a “reasonable chance” player (Deionte Thompson) that could be options for the Cowboys. Today, we’ll look at the same type of thing for defensive tackles.

At the end of the week, we will combine all these players/positions together to form a mini draft board. Here are three possible candidates (ranks courtesy of Dane Brugler’s top 100).

While his Clemson teammate Christian Wilkins is a sure-fire first rounder, the depth of this defensive tackle class could push Lawrence out of the first round. At 6’4” and 340 pounds, Lawrence is ginormous. And he’s not just a big body taking up space; Lawrence has great agility for a guy his size. He exhibits great power and can chew up double-teams on a regular basis. He’s able to shed blocks and drive toward the opponents. When he gets you, it’s over.

Had Lawrence stayed the course he was on after a remarkable freshmen year, he could be seen as a top 10 pick, but his production has tapered off. He’s not the most talented pass-rushing defensive tackle and that will hurt is draft stock a little. Even still, his size and athleticism makes him a force in the middle and if his technique can be coached up a little better, he could end up being one the better defensive tackles in the league. As it stands now, he’s still talented enough to be an immediate starter in the NFL and the Cowboys would be fortunate if he made it to them.

Chances of being available at 58: Slim. The cluster of defensive talent could cause teams to go in different directions and you never know who might slide.

The Cowboys don’t have Irving anymore, but they’d love to add another giant beast in the middle of their defensive line. At 6’6” and 306 pounds, Tillery is a specimen who has a long frame with long arms to snatch opponents. He’s a strong player who exhibits a lot of power to bull rush his way to the quarterback. He gets off the ball quickly and uses his upper-body strength to control the line of scrimmage.

Oh my goodness. I’m just going to say it now… I believe Jerry Tillery’s tape vs Stanford will end up being one of the best showings of any prospect I’ll see this year. pic.twitter.com/qMmZgeyZTw

Similar to Irving, there are some character issues with Tillery. As a freshmen, he was suspended for the Fiesta Bowl for violating team rules. And during his sophomore season, he was caught on camera stepping on an opponent in their game against USC. The good news is Tillery appears to have straightened out as he’s kept his nose clean the past two years while putting up impressive stats. Over 13 games last season, he was an absolute monster recording 30 tackles, 10.5 of which were for a loss. He also had eight sacks, three forced fumble, and two blocked kicks.

While his character may check out, Tillery still needs to be more consistent. If he can put it all together, he could find himself being a force at the NFL level.

Chances of being available at 58: Iffy.

Good chance of being there…

The Ohio State defensive tackle has always been a player waiting to unleash is potential, but he finally showed people how good he could be this past season. Jones had 43 tackles, 13 for loss, 8.5 sacks, one interception, and three fumble recoveries. The Cowboys love defensive tackles who can rush the passer and Jones definitely fits the mold. He’s quick out of his stance, moves his feet well to get around blockers, and has excellent hands to punch his way to the quarterback.

Jones doesn’t posses the frame to be an anchor-down defensive tackle. His build is very similar to Tyrone Crawford, but he’s still young enough to add more mass. He has a tendency to play with a high pad level which will be a problem if massive interior blockers get underneath him. He took a good step forward last season and if this is just the beginning, Jones could be an intriguing player to keep an eye on at the NFL level. He’s definitely got playmaking ability.

Here Jones jumped the route on a shovel-pass for the takeaway and then channeled Ohio State running back star Ezekiel Elliott with a nice run for a touchdown.

Dre’mont Jones had one heck of a game. pic.twitter.com/DSSf41SNXI

Chances of being available at 58: Good. He offers upside, but he’s not a complete player yet. Because he’s not solidified as an NFL starting defensive tackle, there’s a good chance he’s available when it’s the Cowboys turn to pick.