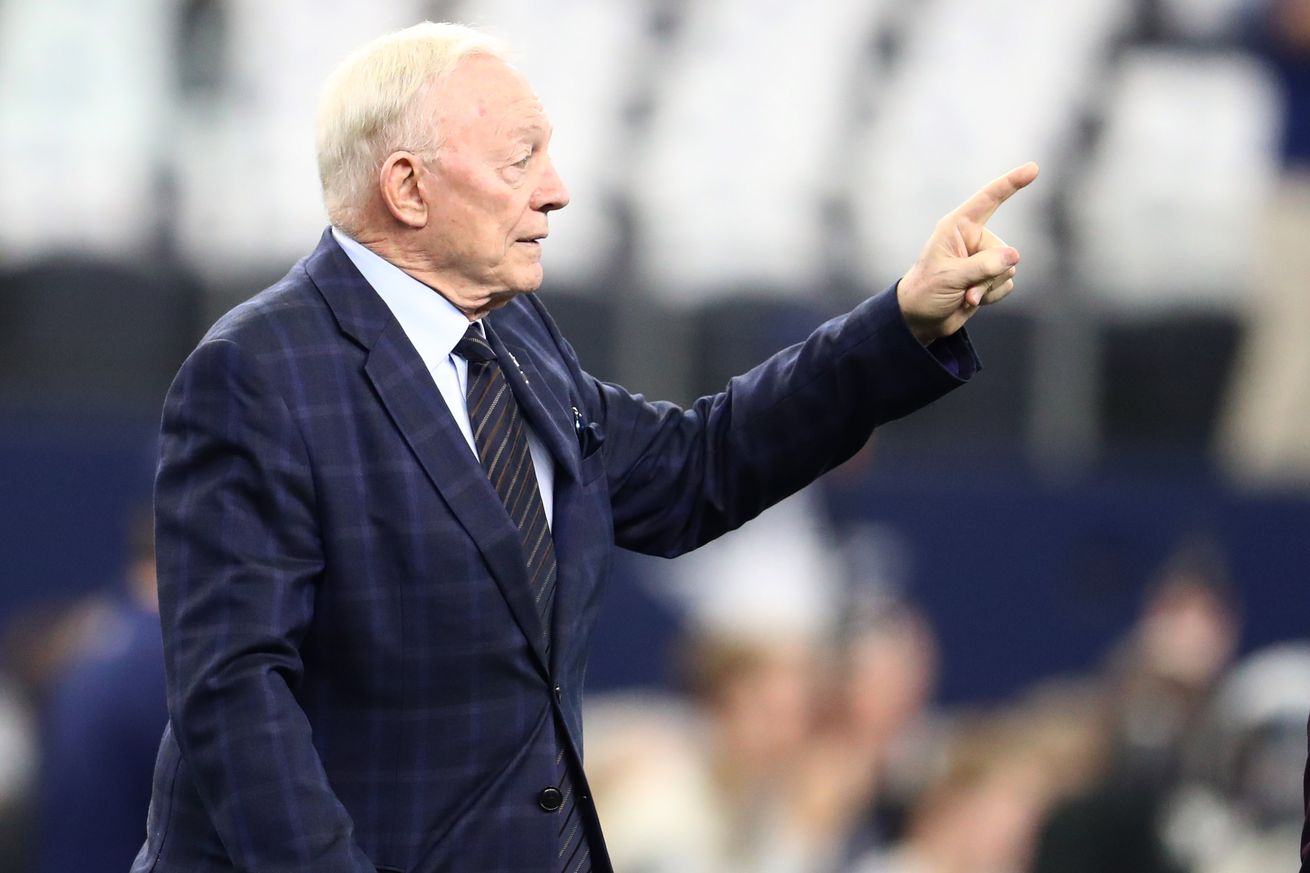 Plus, what have Jason Garrett and the Joneses been saying at the owners and coaches meetings?

It’s that time of the year when all of the owners, general managers, and head coaches gather together for their annual meetings. Rule changes are proposed and voted on. One rule was changed on Tuesday in the interest of the league’s continued commitment to player safety.

According to language in a video posted to the Twitter account of the NFL Football Operations staff, a blindside block “is a foul if a player initiates a block in which he is moving toward or parallel to his own end line and makes forcible contact to his opponent with his helmet, forearm, or shoulder.”

Previously, it had been a penalty to use a blindside block only if it was targeted to the head or neck area.

The play is common in kick and punt returns, as well as turnovers and end around plays in which there is a change of direction leading to pursuit of a ball-carrier.

The other big change to the rules that the NFL will see in 2019 revolves around the ability to review pass interference calls. This became a point of much debate after the Saints lost to the Rams in the NFC Championship game with a terrible no-call for pass interference late in the game. It seems the NFL has tried to correct that now.

According to the NFL Football Operations, coaches can now challenge the penalties in the first 28 minutes of each half, with the final two minutes subject to booth review. Coaches will still only be given two challenge flags per game. Owners passed the proposal 31-1. The Cincinnati Bengals were the only team to vote against pass interference replay reviews, according to NFL Network’s Mike Garafolo.

The rule will also expand automatic replay reviews to include scoring plays and turnovers negated by a foul as well as any extra point or two-point conversion.

According to ESPN’s Adam Schefter, the NFL Competition Committee also admitted that the Patriots should have been called for pass interference on a potential scoring play to wide receiver Brandin Cooks, which would have given Los Angeles the ball at the one-yard line at the end of the game.

Apparently, Jason Garrett played an instrumental role in convincing the NFL owners to approve the rule change that allows for pass interference calls and no-calls to be reviewed. Saints head coach Sean Payton, who maybe, definitely wanted the change to happen, praised Garrett for his role.

New Orleans coach Sean Payton had high praise for Jason Garrett presentation to owners that preceded a change in the current replay rules. “He was outstanding,” Payton said. “When he finished I was like dilly dilly.”

One of the more intriguing moves the Cowboys have made so far in free agency was the signing of veteran receiver Randall Cobb, who is expected to replace Cole Beasley as the primary slot receiver. Apparently, Cobb’s presence in Dallas makes Jerry Jones very hopeful for the future of this offense.

“[Cobb]’s, of course, such a competitive personality. If you ever met somebody that’s built, personality-wise, for the game of football, he’s one of them. He is talented. Limited by injury, but of course, any player you’ve got has that risk. That was an issue. I think with his experience, with some of the things he’s done at Green Bay, that will meld with some of the new things that we might be doing with our receiving corps and our routes. So the idea of him coming in and having him get adjusted to the way we’re going to be running routes wasn’t a concern of mine because we’re changing that up to some degree.”

The Cowboys might have officially removed David Irving from their organization, but they’re still hearing his name. Irving recently stated that it was Jason Garrett’s advice that prompted him to retire so he could continue smoking marijuana. This, of course, prompted some questions for the coach, who gave a surprisingly straightforward answer.

“Yeah, I don’t want. . . .,” Garrett said. “David and I have had a lot of conversations, like you do with a lot of the players on your team, so I don’t want to get into too many conversations. But to that particular point, the only thing I would say is there are some rules and parameters you have in the NFL if you want to play and you have to follow those rules, independent of what your opinions are on any particular topic, you have to stay within the confine of the rules or they’re not going to let you play. So something so important to you to break those rules and that prevents you from playing, you’re making a decision about what you value most. I was just trying to indicate to him if you want to play in the NFL, these are the rules. These are the parameters you have to follow. Hopefully, he understands that.”

David Irving wasn’t the only former Cowboys player that Jason Garrett was asked about. Kellen Moore, former backup quarterback and now the newly-promoted offensive coordinator, is still very unknown at this point. But Garrett offered an ever-so-slight look into how it’ll work under Moore.

Jason Garrett had high praise for Kellen Moore. Asked if he’s seen enough from Moore in the past few months to know what direction the OC wants to take this offense, Garrett replied, “It’s a collaborative process. It’s the direction we want to go.”

There had been rumors for quite a while about Jason Witten making a return to the Cowboys, but it still came as a shock when it actually happened. But not to Jerry Jones, apparently, who still remains skeptical about whether or not Witten will actually agree to a reduced snap count in games.

“What I immediately think about when you ask me, “What was the first indication you had he was serious?” It was before he left. He really was one-foot-in, one-foot-out when he left. It was so easy to think and so easy to see that he really didn’t want to quit playing football. He was just trying to buy in and trying to rationalize that this was- going away- the best thing for his future and the opportunity to be a top sports television personality with Gruden retiring and a real opening for him.

But he was having to talk to his mirror and I could tell it. So it was no surprise at all when, at various times, he would indicate how much that he missed and how much he thought, ‘I’ve got time to be doing what I’m doing right now. But I’m running out of time to be on that field.’

“It sounded team-like, but knowing Witten, I have got to see it,” Cowboys owner Jerry Jones told the media on Monday when asked about Witten playing a reduced role this season.

In addition to all of the players the Cowboys have signed thus far in free agency, defensive tackle Malik McDowell is still a potential target. He hasn’t been able to play in the NFL yet after suffering an injury in an ATV accident, but if he’s healthy enough, Jason Garrett thinks McDowell could be a contributor.

“I think the biggest question with him is the medical question. Making sure we’re comfortable with that,” he said. “He’s a young player, some uncertainty about him because he hasn’t played. But if you got back to the evaluation coming out of school you say, ‘Boy there was a lot to like about him.’ We’re just in the process of trying to find out more about him. He came in and we had a good visit with him and we’ll continue to go down that process of doing our due-diligence.”

Michael Irvin is asking for our well wishes

The Playmaker divulged on Tuesday (via Instagram) that he’s undergoing a biopsy to test for throat cancer. He also shared that it was this illness that took his father at the age of 51. If you have a chance, send some good vibes his way.

‪Spent Sun & Mon in LA at UCLA medical Health (Ronald Reagan Hospital) doing health test. I would not usually do this but this I need to share. Growing up in the ghetto of Ft Lauderdale the one thing you have to conquer to get out is FEAR. I did! As a football player the no fear gift served me well as a blessing and an asset on the field but sometimes off the field it’s been a curse and a liability. This past football season after the @dallascowboys beat the @Saints i was so elated and hyped I lost my voice and the problem persisted for almost 2months. After visiting some of the best throat Doctors they thought it to be wise to take a deeper look at the situation. So we schedule and performed a throat biopsy. To give background I share with you that I lost my father at the young age of 51. He had throat cancer. This daemon has chased and vexed me deep in my spirit all my life. So saying I am afraid this time is a big big understatement. I AM TERRIFIED!! My Faith tells me whenever you face great fear you go to your greatness power. Mine is God. I am asking all who will. Could you please send up a prayer to help my family and I deal with whatever the results may be? Thanks for your thoughts and prayers in advance I will continue to pray for your fams protection and prosperity as well. May God Bless us all ‬

We’re starting something new in the daily links, a tweet of the day. To kick things off we’re checking in on two members of the Hot Boyz, Maliek Collins and Taco Charlton. They’ve been working out and have been doing so with Rashan Gary and Bradley Chubb. Good for them.