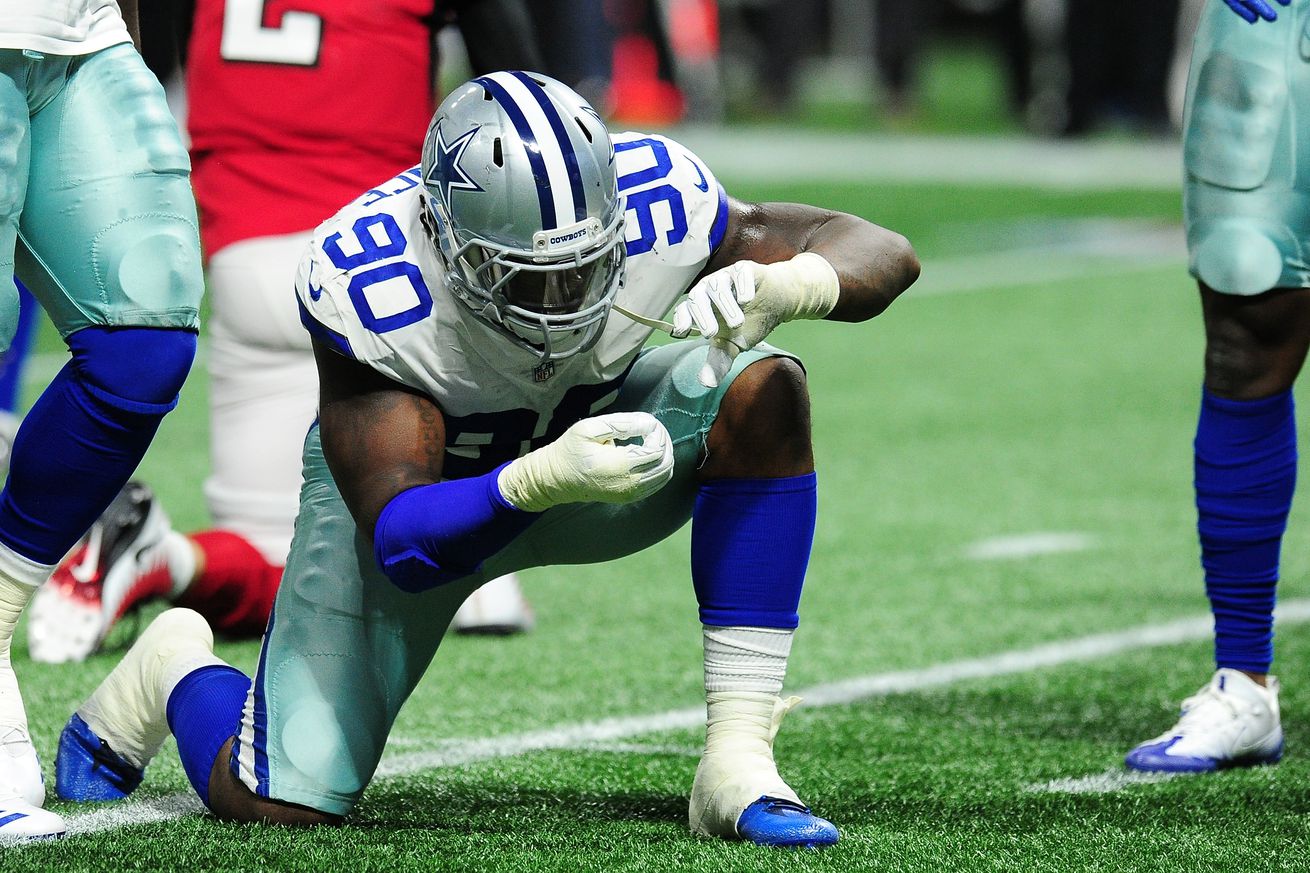 How does Lawrence compare to the other top EDGE’s around the NFL?

There’s no secret about what news topic has dominated the Cowboys offseason. Even with Earl Thomas rumors, Randall Cobb signing, and Robert Quinn trade rumors, DeMarcus Lawrence has taken over as the key focus for the Cowboys front office, and the Cowboys fans. Whenever a top tier EDGE rusher is inline for a new contract, negotiations seem to be a roller coaster of a ride for both parties involved. With each pass rusher wanting to set the new market, their respected teams are looking to be responsible with their cap-space in hopes of building a Super Bowl roster.

A report came out today that the DeMarcus Lawrence party may already be upping their price tag as of March 27th. Calvin Watkins of the Athletic broke the story early Wednesday morning:

The gap between the sides continues to widen. According to multiple sources, Lawrence’s demands increased in the last few weeks. He went from asking for an average salary of $20 million per season to $22.5 million. Last month, the Cowboys were unwilling to give Lawrence a $20 million average, but have since increased their offer to that point. Sources indicate the Cowboys are willing to give Lawrence a six-year contract that would make him the highest-paid 4-3 defensive end in the NFL with an average salary of $20 million. Lawrence, according to sources, is seeking more.

There are multiple angles to this story as DeMarcus Lawrence and his agent are looking to squeeze every penny out of the Cowboys, but also the Cowboys’ front office trying to drive the fanbase and public opinion to possibly pull Lawrence’s price tag back down. As we all know, Lawrence is currently still on the franchise tag at $20,500,000 for 2019, but has yet to sign his tag. There are many reports out there that Tank Lawrence has no plans to play on the franchise tag in 2019, after doing so in 2018.

In most cases, we’d use the saying “deadlines make deals” to make all of Cowboys Nation feel a bit better about securing their pass rusher for the foreseeable future, but in this case, it’s a bit different with Lawrence needing surgery on a torn labrum he suffered in the 2018 season. Labrum surgeries normally require a 3-4 month recovery span to reach 100% health. Knowing the timetable for rehab, if signed on March 28th, Lawrence would already be cutting it close to missing OTA’s, training camp, and possibly even some of the preseason. The longer this thing drags out, the more likely it is that Lawrence could potentially miss regular season games while getting back to game-form.

Cowboys fans may say that this negotiating tactic from Lawrence and agent David Canter is irresponsible but what people may forget is this time last year, the Cowboys were going through the same negotiations with DeMarcus Lawrence and placed the franchise tag on him, because they wanted reassurance that Lawrence could 1) stay healthy and 2) produce at the level he did in 2017. Lawrence not only played in all 16 games, plus the two playoffs games, but he performed at a elite level finishing with; 10.5 sacks, 23 quarterback hits, a career high in tackles (64), and a career high in tackles for loss (15). You asked him to prove it again and he did, at an even higher rate overall than his 2017 season. So what’s the hold up?

Going back to Calvin Watkins report, it seems as if the money is still not quite what Lawrence and his agent are wanting. In the report, it says that Lawrence was asking for $20 million per year a few months ago, but the Cowboys were unwilling to go that high, now with the Cowboys willing to meet those demands, his agent has now raised the contract demands to $22.5 per year. The questions swirling around today relate to Lawrence really being worth $22.5 million dollars per year. Let’s take a look at the other top paid EDGE’s around the league and see if the Cowboys are being smart by sticking to their guns, or if Lawrence really is worth a record breaking contract.

Recently, Khalil Mack set the EDGE market signing a six-year, $141 million contract with $90 million guaranteed, and an average annual salary of $23.5 million with the Chicago Bears. Let’s take a look at the structure of the contract.

With the salary caps steadily increasing each year in the NFL, that should open up the possibilities for bigger annual salaries for players throughout the league, which is one of the reasons Lawrence and his agent may have increased their demands in recent weeks. Along with the salary cap jump, we witnessed edge rushers like Trey Flowers and Za’Darius Smith sign monster deals on the open market.

As we all often hear, it’s a “what have you done for me lately league”. As brutal as it is, guys like Sean Lee, Tony Romo, and Dan Bailey found that out the hard way when their health limited their playing time and new opportunities presented themselves to the Cowboys front office. This is also a negotiating tactic, that I’m sure Lawrence and his agent are using when discussing long-term details with the Joneses.

Since battling through nagging back injuries in 2016, Lawrence has yet to miss a game in the 2017 and 2018 season. In those 32 games, Lawrence has recorded 25 sacks, 122 tackles, 29 tackles for loss, and 49 quarterback hits. While some may call this cherry picking, let’s call it more like developing both physically off the field and skill-wise on the football field. What we’re seeing is a player that, when drafted, needed some time to develop, and finally developing into the player the Cowboys wanted when trading up for the Boise State edge rusher. In this two-year span, it may surprise you just how dominate Lawrence has been both as a pass rusher and a run defender.

In the last two seasons, Khalil Mack has played in 30 of 32 eligible games, missing two games due to an ankle injury. In this two-year span, Mack has recorded 23 sacks, 125 tackles, 25 tackles for loss, and 40 quarterback hits. When comparing the two players, Lawrence has outdone Khalil Mack in every category statistically except total tackles, and he’s been healthy enough to play in more games. This isn’t me saying that DeMarcus Lawrence has had a better career than Khalil Mack, this isn’t me saying that DeMarcus Lawrence is a healthier player than Khalil Mack, this is me simply stating facts that in a “what have you done for me recently” league, DeMarcus Lawrence has statistically done more.

Along with the statistical numbers, I did some diving into team defensive stats. This is again just comparing 2018, because when handing out contracts — the level of play, health, and leadership aspect is more important now, than it was in the beginning stages of both players careers. The reason for this exercise is to see where the the Cowboys would be without DeMarcus Lawrence in terms of sacks, and to see where the Bears would be without Khalil Mack in terms of sacks. Of course, the more important a player is to an organization, the more value he holds in terms of a contract.

DLaw’s front 7 produced 25.5 sacks outside of his own production

Mack’s front 7 produced 31.5 sacks outside of his own production.

Take DLaw off of DAL they’re not very good

Neither of these totals are super impressive, but they shouldn’t be when you’re taking two of the most dominant EDGE rushers in the NFL numbers off of the team. The one thing that remains a fact is the Bears were still able to generate six more sacks as a front seven (not including secondary) than the Cowboys. The other question that continues to get brought up in arguments is the percentage of snaps each player gets allocated an extra blocker. I wasn’t able to find double-team percentages on PFF or Next Gen Stats, but I was able to go back and watch the Wild Card round weekend games for both the Cowboys and the Bears. Here’s what I came away with from just that one playoff game:

After going through the contract numbers, player comparisons, and statistical comparisons, let’s now turn to the injury issues surrounding DeMarcus Lawrence, which is something that needs to be brought up in negotiations. Throughout his career in Dallas, Lawrence has been under the knife for his back twice, and will (hopefully) be going under the knife again this offseason for his shoulder. Along with those surgeries, DeMarcus Lawrence also had surgery on his foot in his rookie year. The Cowboys’ front office has a serious argument in hopes to bring that dollar figure down, but Lawrence and his agent are going to turn to not missing a game in the last two seasons. Both arguments can be true and fair for both parties. While Lawrence in fact has not missed a game in two seasons, the injury history is rather lengthy and spells some concerns for the long-term, but at the same time, Lawrence has also played through multiple injuries to help his defense by avoiding mid-season surgery and toughening it out. This is where the negotiations get tough, because both sides have very valid arguments.

Last but not least, and one of the most important aspects of DeMarcus Lawrence’s game is the leadership he brings to the table both on the field and in the locker room. Considering how young the Cowboys defense is, having a pass rusher with the attitude of DeMarcus Lawrence is something the Joneses can’t gloss over. Lawrence is a mentor to some of the other young players along that defensive line, and brings an attitude to the locker room that this defense has lacked until Lawrence stepped into this leadership role in 2017.

There are so many pieces to this puzzle that it’s hard to paint a clear picture, but when looking at DeMarcus Lawrence age, recent production on the field, ability to both rush the passer and play the run, and the value he brings as a team leader, locking DeMarcus Lawrence up for the foreseeable future makes the Dallas Cowboys an all-around better football team today, tomorrow, and for the next three-to-four years. The Cowboys don’t have a first-round pick, don’t have a reliable option to replace Lawrence or even complement him for that matter, and have even more contracts coming up in the next few years where they will need to allocate money. If this team is in “win-now” mode, signing DeMarcus Lawrence is a must, even if it costs you $22.5 million per year.