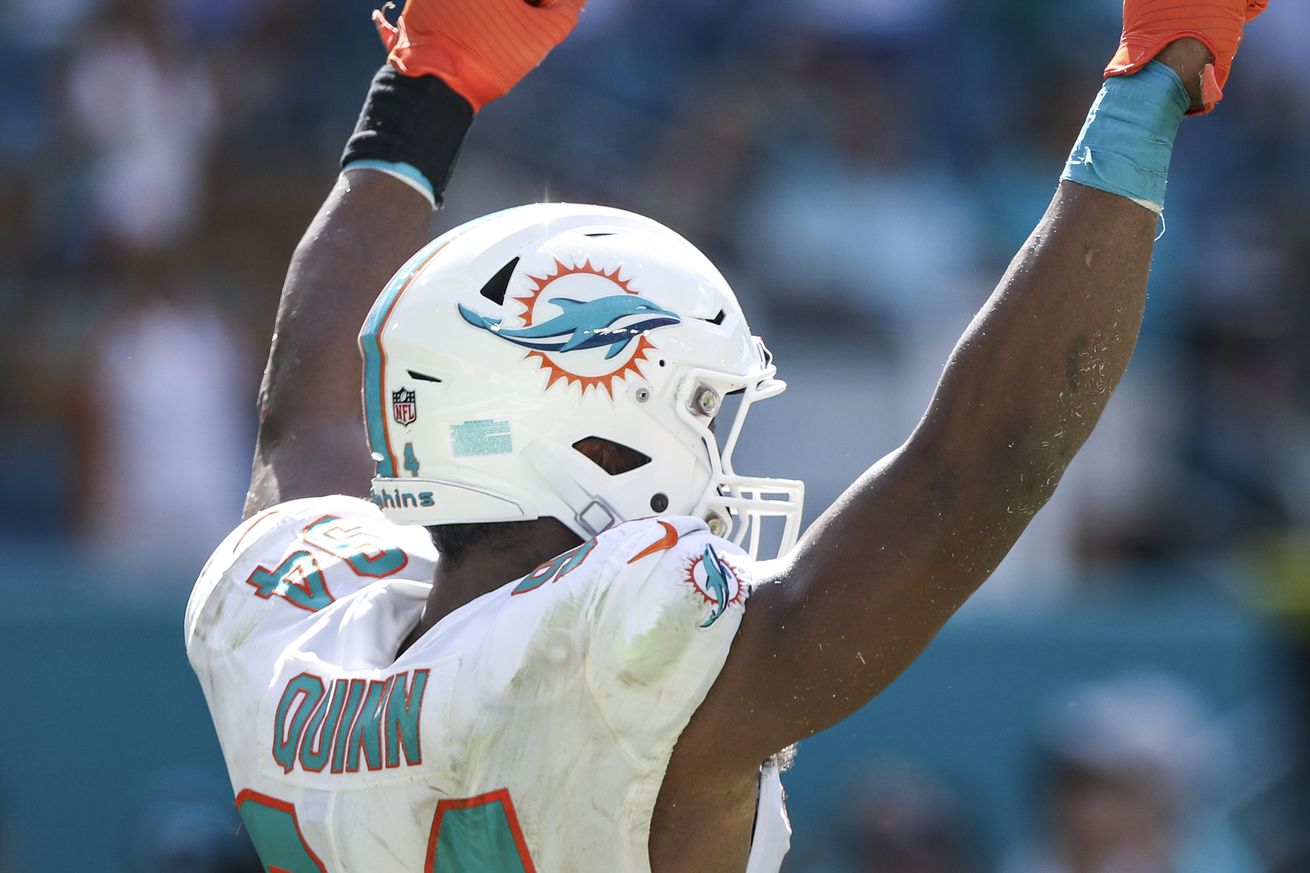 What does a beat writer from Miami have to say about newly acquired pass rusher, Robert Quinn?

Did he slow down physically? Did you see plenty of explosion? Was the scheme fit wrong? What type of guy is he? At 28 years old, you should still be in your prime and not slowing down, correct?

Salguero: Right. Actually he sped up. He had 6.5 sacks — four of them in December.

What I would say to you is talking to some of the people in Miami, he didn’t adjust all that well initially to South Florida and Miami early on. He started very slow. It took him awhile. I think that training camp down here took something out of him, I really do. It’s very hot down here but it’s also very humid. He comes from — I get it — he was playing in L.A. He played in St. Louis before that. But one of the problems the Dolphins have had is they wear out a lot of people and veterans. And he didn’t get of the so-called ‘veteran’s days off’ in training camp.

So I think that took a toll on him. But like I said, in December I think he looked around and said, ‘Hey, I’ve only got 2.5 sacks. I need to get four sacks.’

The Jones’ have insisted that the Quinn trade is more about Randy Gregory than DeMarcus Lawrence, do you believe them?

Per a source, Quinn is looking forward to having fun in Dallas where he will play exclusively right end.

Quinn would be the answer to the indefinite suspension of Randy Gregory, giving the Cowboys a proven pass rusher opposite DeMarcus Lawrence.

He started all 16 games a season ago with the Dolphins after coming in a trade with the Rams for a fourth-round pick, racking up 6.5 sacks, 38 total tackles, 15 QB hits, and two forced fumbles.

A coaching change made him a bad fit for the scheme run by new coach Brian Flores. But he is a perfect fit for the 4-3 scheme employed by the Cowboys.

Quinn has 69 sacks in eight seasons between the Rams and Dolphins.

Again, Quinn is a replacement for the suspended Gregory. He is not insurance for Lawrence, who is an unrestricted free agent and currently in a contract impasse with the Cowboys.

But if the Cowboys can get Lawrence back in the fold, Quinn is the cherry on top of a string of recent acquisitions that have not only allowed them to fill all their holes heading into the upcoming to 2019 NFL Draft but also upgrade the roster since the end of last season in hopes of truly making a deep playoff run next season.

Cornerback continues to be a sneak need for the Cowboys in the 2019 NFL Draft, especially with this news coming down.

FRISCO — Scratch cornerback Byron Jones off the list of Dallas Cowboys players up for contract extensions this spring.

More importantly, scratch him from being available for OTAs, minicamp and training camp after Jones underwent hip surgery early this week.

Jones is going into the final year of his contract and will make $6.2 million on the fifth-year option.

He was hoping to sign a long-term contract extension and secure his future with the Cowboys.

Now all bets are off, especially considering he won’t be ready until the start of the season.

Someone has to budge. Will it be Lawrence with his surgery? Or the Cowboys with their dollar figure?

On Thursday, Bleacher Report’s Mike Tanier argued the Cowboys should pay Lawrence the way the Los Angeles Rams took care of back-to-back NFL Defensive Player of the Year Aaron Donald rather than lose him like the Oakland Raiders lost linebacker Khalil Mack:

”Lawrence was the best player on a young defense that improved drastically last year, making him almost as indispensable to the Cowboys as quarterback Dak Prescott. And whether the Cowboys like it or not, Mack and Donald reset the market with their massive deals last year, which is why the good-but-hardly-spectacular Flowers now has $50 million guaranteed in the bank.”

Hill reported Friday that the Cowboys and Lawrence are “at an impasse in contract negotiations.” Dallas has offered around $20 million annually as part of a long-term deal, while Lawrence is seeking a number closer to Mack’s NFL-leading $23.5 million per year, per Hill.

‘Let’s do it’: Jason Witten posts return to Cowboys’ locker room on Instagram, shows off No. 82 jersey – Selby Lopez, SportsDay

As if it hasn’t already been made official, Jason Witten is back with the Dallas Cowboys.

Almost a month after the 11-time Pro Bowl tight end stepped away from his job with ESPN Monday Night Football and signed a one-year deal with the Cowboys, Witten posted his return to the locker room on Instagram on Friday.

In the video, Witten walks toward his locker, showing his nameplate, helmet and No. 82 jersey and finishes by saying “Here we go, let’s do it!”

The Dallas Cowboys are acquiring a lot of talent in a short period of time, but that inevitably means someone has to go.

That seesaw dynamic isn’t as prevalent in the offseason as it is in the Fall, mostly because teams can carry only 53 men on their active roster during the season versus the bloated 90-man allotment in the Spring and Summer months. Although not nearly as pressing a matter, it’s still a problem nonetheless, and they’ve decided how to balance the acquisitions of Christian Covington, Kerry Hyder, Randall Cobb, George Iloka and Robert Quinn by cutting loose one of their defensive backs. The move is mostly driving by the signing of Iloka, who’ll supersede Jeff Heath as starting strong safety in 2019.

This made Marqueston Huff the low-hanging fruit on the depth chart, and he’s now been plucked — released into free agency on Friday, March 29.

Citizens of Philadelphia have proven yet again that the Dallas Cowboys are all they think about – RJ Ochoa, Blogging the Boys

We get it Philly, you’re obsessed.

You’re likely aware that this week was Opening Day all across the MLB. One of the bigger storylines this season is Bryce Harper (noted Cowboys fan Bryce Harper by the way) in his first season with the Philadelphia Phillies.

According to NBC10 Philadelphia, during the Phillies first game of the season all people kept thinking about was the Dallas Cowboys. Seriously.

What is up with that ugly Dallas Cowboys-looking star that swipes between images on the Phanavision?

At least four different people mentioned it to me. A reminder to the Phillies video team: there is not much Philly fans hate more than the Dallas Cowboys and anything associated with them.

Yes, it probably is meant to be the dot on the ‘i’ in the Phillies logo, but still. Too close to Dallas for our liking.

Phillies fans are upset that the ‘i” in the team’s logo looks like the Cowboys star. What’s funny is that it actually does sort of look like that. The Phillies have obviously done it on purpose as an ode to the world’s greatest football team and the one that reigns superior to the one that shares a city with them.

The motherships own Lindsay Cash Draper dives into the safety position for big D.

Of course they’re looking at outside help in free agency – the question is, how much are they willing to spend? Jerry Jones confirmed earlier this week that there will indeed be conversations in free agency surrounding the safety position. Big names are Earl Thomas, and now recently Landon Collins. It’s been some time since the Cowboys dropped big money in free agency (2012, cornerback Brandon Carr signed in Dallas for $50.1 million), and now could be the time for Earl Thomas, who is currently training and living in Texas. Maybe living year-round, long term in Texas is a priority for him. The problem they’re running into: the Cowboys also have DeMarcus Lawrence, Dak Prescott, Ezekiel Elliott, Byron Jones, and Amari Cooper waiting on new deals, as well. Buckle up for another dramatic offseason regarding the safety situation.

Can Tavon Austin finally stay healthy in his second year with the Cowboys?

What’s Been Good: When he was actually on the field, Austin showed flashes of the playmaking ability that made him a first-round draft pick. He smoked his coverage for a 64-yard touchdown on the third play of Week 2. He scored the Cowboys’ only touchdown against Seattle the very next week. The six times the coaching staff actually called for him to carry the ball, he averaged nine yards per touch. In the playoffs, he showed his ability as a punter returner with a 51-yard return – not to mention an 80-yard return that was called back by a holding penalty.

During halftime of Friday night’s Virginia Tech and Duke game, Hokies coach Buzz Williams did an interview with Tracy Wolfson on CBS. Obviously Wolfson is part of the CBS team that also handles top NFL duties for the network, she works with Jim Nantz and Tony Romo.

Buzz asked if Nantz was on the call and then jokingly said that they should sub Tony Romo in. Everybody loves #9.