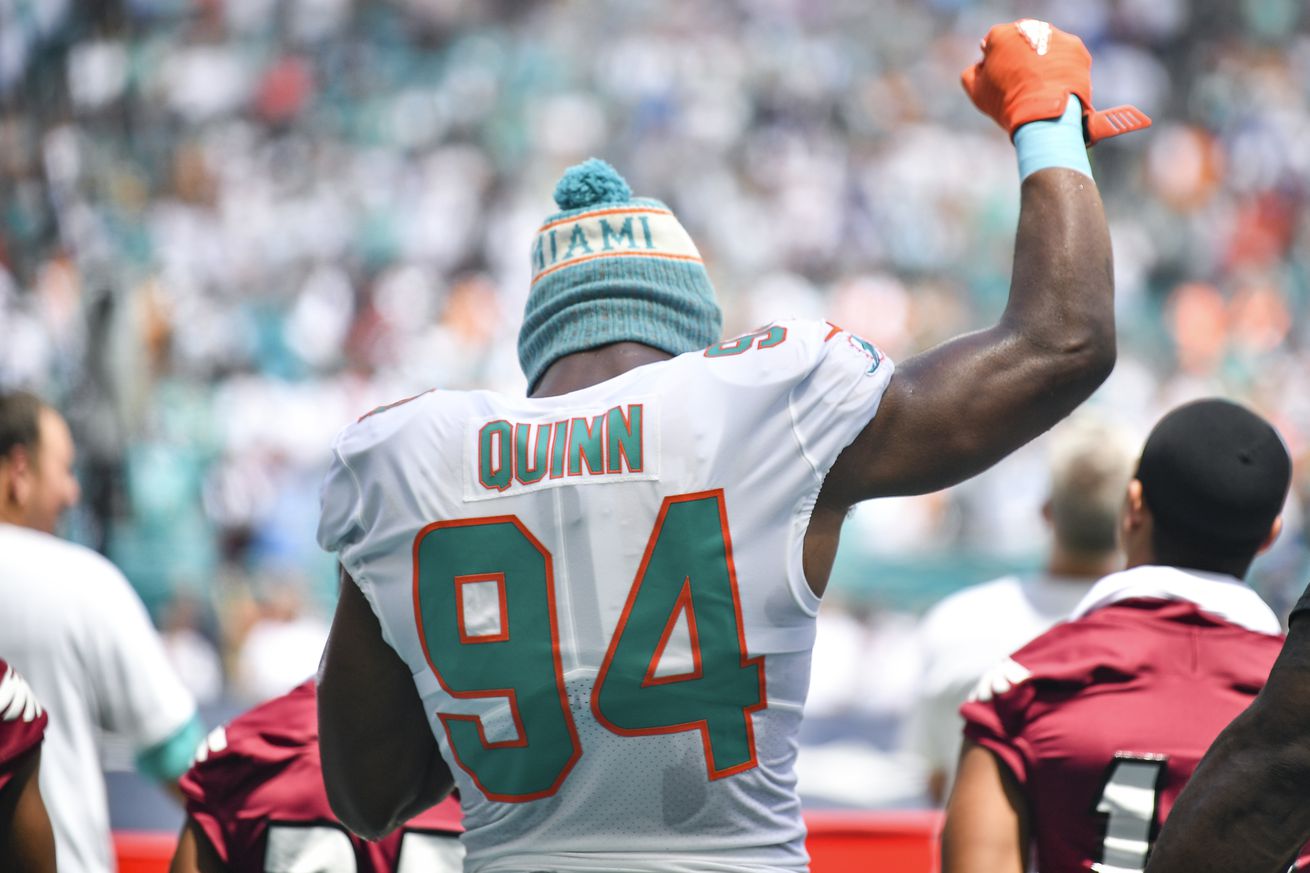 The Cowboys new edge rusher might be better than we realized.

The Dallas Cowboys traded a 2020 sixth-round draft pick to acquire the services of Miami Dolphins defensive end Robert Quinn for the 2019 season. Considering the minimal draft cost to the team, this is essentially like a free agent signing to a one-year deal. The great thing is, even if Quinn produces and prices himself out of Dallas, the team should still end up with a compensatory pick that is higher than what they gave up to get him. What a screaming deal!

Of course, we won’t really know how great of a deal this is until we see Quinn take the field. Some are concerned that Quinn isn’t anything like the player he was when he racked up 19 sacks back in 2013. While it’s true that his sack numbers have steadily declined, Quinn remains one of the league’s top defensive ends when it comes to pressuring the quarterback. In January, ESPN published some pass-rushing data that you might find interesting. They defined a “win” as a play where the pass-rusher is able to beat his block within a time of 2.5 seconds. And guess who came out on top last season?

It’s probably not surprising to see DeMarcus Lawrence tied for third on this list with a win rate of 34%. However, seeing Quinn’s name at the top of this list has to be an encouraging sign for Cowboys fans. The team would now have two of the top three edge rushers in the league in terms of win percentage from 2018. That’s pretty fantastic.

Despite featuring one of the top pass rushes in the league, the Dolphins finished 7-9 last season. One of the biggest factors was their inability to stop the run. Miami ranked second to last in rushing yards allowed per game (145). It’s hard to capitalize on the pass rushing ability of Cameron Wake and Quinn when the team cannot stop the running game.

The Cowboys run defense is still a work in progress, but even with their periodic struggles, Dallas finished fifth last season, only allowing 94 yards per game. Part of the reason for such a strong run defense was the emergence of rookie linebacker Leighton Vander Esch and the improved play of Jaylon Smith. When you combine this young group with a formidable pass rush, suddenly things look very good for the defense. And that is what he addition of Quinn provides the Cowboys.

At just 28-years-old, Quinn still does a lot of things really well. He’s got a fast first-step, which in a must for a Rod Marinelli edge rusher. He has an arsenal of pass rushing moves and can beat his opponent many ways. His movements are sudden and he can quickly change direction to keep his opponents off balance. And Quinn knows how to keep his pad level low to sustain leverage. Similar to Lawrence, Quinn has active hands and loves to swipe at the ball. He’s not a power player, but he knows how to finesse his way to the quarterback. He’s not the biggest player at just 264 pounds, but he keeps attacking and doesn’t get bullied despite his size.

Quinn’s addition to the team will complement Lawrence as these two will be the bookends of the Cowboys defensive line. It’s easy to temper our expectations because Quinn isn’t the star he once was, but it shouldn’t be discounted how disruptive the veteran pass rusher can be. There’s a reason he was a first-round pick. There was also a reason the Rams gave him a four-year, $57 million extension. And there was a reason the Dolphins traded for him and took on that contract when they ran a 4-3 scheme. It’s the same reason the overly frugal Cowboys front office is offering up cap resources to acquire him – it’s because Quinn’s a really good pass rusher. And this isn’t speaking in past tense. The 2018 data shows he is still very much a force to be reckoned with.