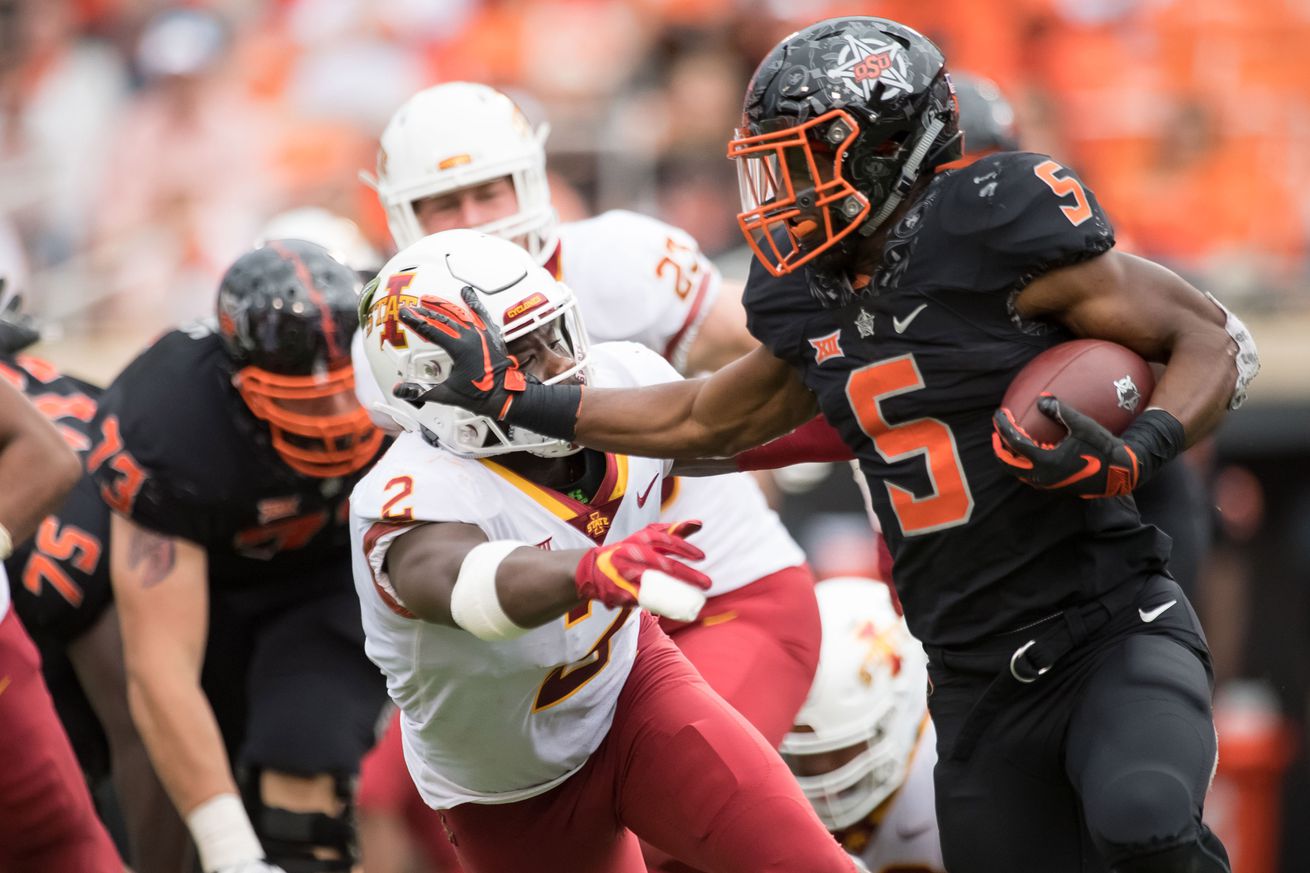 The Cowboys would like to take the load off Zeke, and Hill could help do that

The Cowboys went into the offseason with quite a few holes to fill and they’ve done a pretty good job of getting low risk free agents to do that. One area that we’ve seen minimal action thus far is the running back position. Rod Smith has been the primary backup to Ezekiel Elliott the last two years, but he’s a free agent and the Cowboys have shown little interest in him or anyone else in free agency thus far.

Dallas currently has four running backs on the roster: Elliott, fullback Jamize Olawale, Darius Jackson, and Jordan Chunn. While the team likes Jackson, I’d expect them to add at least one more player to compete for that backup spot. The big priority here should be finding someone who can take a decent amount of snaps away from Zeke so that he doesn’t get overworked. Looking at the draft, there are quite a few impact running backs the team should be able to get in later rounds, and Oklahoma State’s Justice Hill is one of the more prominent ones.

Hill was a three-year starter at Oklahoma State, compiling 1,142 rushing yards in his freshman year and 1,467 in his sophomore year. He missed three games in 2018 with a rib injury, which will cause him to slide a bit in the draft, but Hill’s average yards per carry actually increased in 2018.

A lot of that is due to how athletic and shifty Hill is. He’s a little smaller than your average workhorse running back, but Hill relies on his natural talent to get the job done on a consistent basis. His best trait seems to be his agility; Hill would routinely demonstrate terrific ability to make cuts on a dime and change direction without losing balance. His ability to make defenders miss in the open field made him dangerous in college, where he put up over 3,500 career rushing yards.

That also speaks to his elusiveness, as Hill does a good job of combining his lateral agility with some solid fake-out techniques. More hesitant tacklers got fooled by Hill with regularity, and Hill’s slender frame helped him to slip out of tackles from the more aggressive defenders. As evidenced by his 4.4 40-time, Hill is a fast player who does a good job of keeping pace. That’ll help as he adjusts to faster defenses in the NFL, especially after playing in the light-on-defense Big 12 in college.

Given all of his traits, you’d think that Hill would make for a great receiving threat, but he wasn’t given too many opportunities to show that in college. Hill had 49 career catches for 304 yards and only one touchdown. The bulk of that came in 2017 when he had 31 catches for 190 yards. Based off that small sample size, it does appear that Hill can be effective as an option out of the backfield. He has decent route running skills, but not enough to line him up out wide. It’ll be interesting to see how he responds to more work as a receiver in the NFL.

One of the most important aspects in a running back for the Cowboys, though, is the ability to pass block, specifically when it comes to picking up blitzes. That’s one of the reasons Dallas was sold on taking Zeke; Elliott is a terrific blocker. Similarly, Hill is very solid in pass protection, though not up to the level of Elliott. He takes good angles in picking up blitzes and does a good job of setting his feet to throw a block. His size won’t allow him to ever stand up a pass rusher, unless it’s a defensive back, but Hill can at least buy an extra second for the quarterback which is better than some running backs coming into the league.

Another issue with Hill’s size is that it sometimes prevents him from running into the pile for the dirty yards. He can’t truck someone over or plow his way forward for extra yards like Zeke frequently does. In Dallas, that’d be okay because that’s what Zeke is there for. But other teams that might be looking for an every-down back will knock Hill for that. Nevertheless, Hill has the experience working as an every-down back from college, although his rib injury last year draws questions about his durability, as it came at the end of not only the 2018 season but his three year college career. Has his body been worn down in those three years? GM’s will wonder that.

Hill is an electrifying athlete who can be dangerous in the open field, and he offers upside as a receiver. His lateral quickness and burst makes him an ideal fit for a zone running scheme, and his solid blocking ability means he is complete enough of a player for the Cowboys to realistically consider him. Hill is likely to be taken somewhere between the third and fourth round, and if Dallas can land him with their fourth-round pick, they’d be getting a great second option that allows Zeke to get a bit of rest in games and preserve his body.