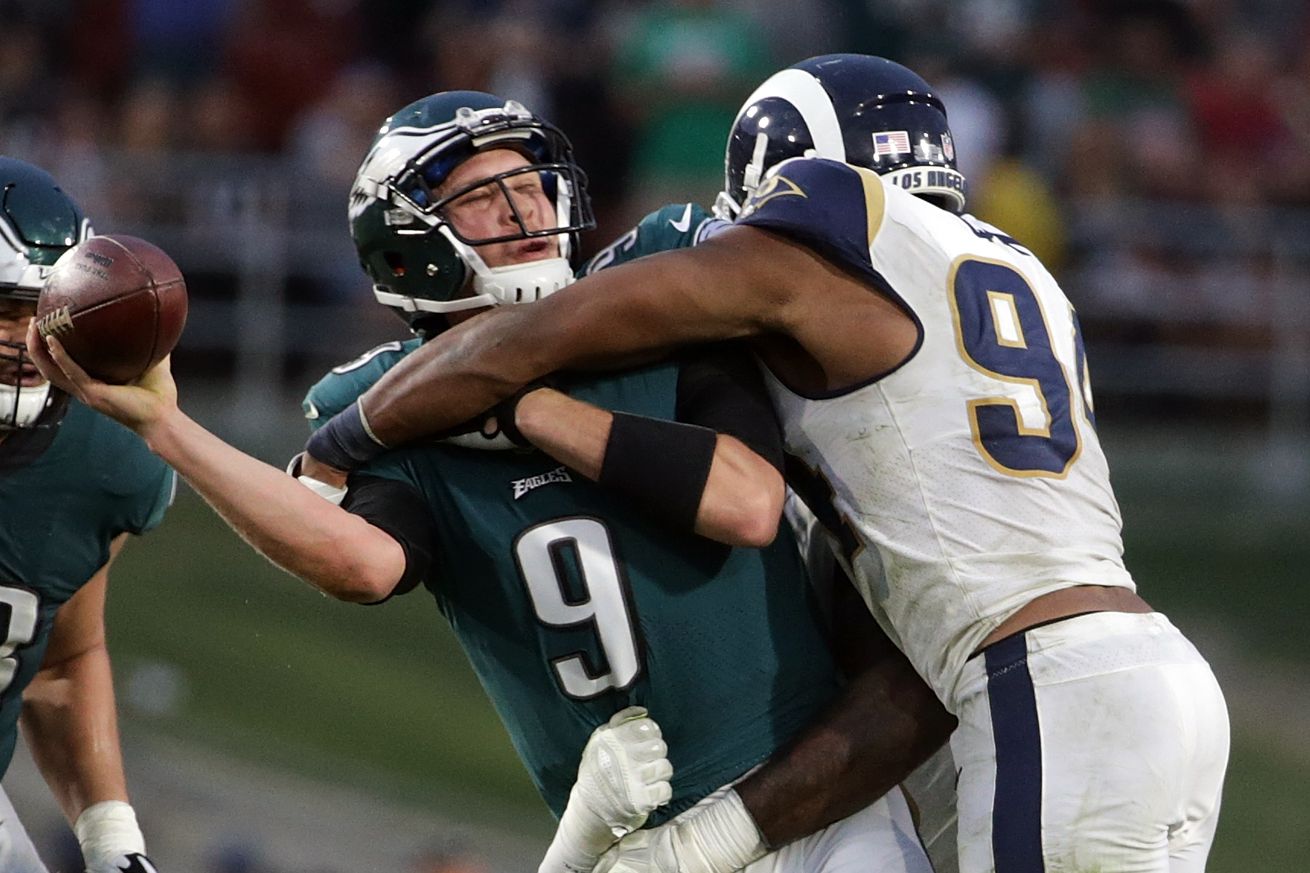 Most believe the Cowboys have been quiet this offseason, but actually – they’ve been quite busy.

All told, the Cowboys have signed, franchised, picked up options or traded for – i.e. acquired – 28 players during the first 16 days of free agency. And yet still they have roughly $13 million more in cap space to not only fund their draft, but likely extend a contract or three, and actually save a little more 2019 cap space if they can work out a long-term deal for the likes of DeMarcus Lawrence and Amari Cooper.

Some of the moves aren’t flashy, but they’re necessary.

You know what they’ve been doing? They’ve been wisely putting a team together, not the touring football equivalent of the Harlem Globetrotters. This isn’t the NBA where teams collect stars as if a new constellation is rising in the sky. This game takes 22 starters, special team specialists backups at key positions, funds for your upcoming draft class and enough depth spread around to withstand injury.

But not everyone agrees that the Cowboys are handling the offseason correctly.

Why Cowboys should follow Seahawks, Rams lead, use this offseason to put talent around Dak Prescott – Staff, SportsDay

What I’m really saying here is Seattle six years ago won a playoff game in Russell Wilson’s first year, in fact they beat another rookie quarterback in RG III [Robert Griffin III] in Washington and then they lost the next week. But that offseason, they traded their first-round pick, they went out and got Michael Bennett, they got Cliff Avril, they tried to load up because they had a good team and it’s like ‘here, we’ve got a quarterback, we’re paying nothing and he’s good. That frees us up in a salary cap world to put great talent around him.’ They won the Super Bowl the next year and they got to another Super Bowl.

What Steven [Jones] is doing is he’s budgeting long-term. That is what Michael Irvin brought up last week. He is budgeting long-term to make this a good team for a very long time, which I think goes against what the NFL is about these days. It’s more about, ‘oh, man. Boom! Seize this opportunity!’

No contract talks yet with Prescott, Cooper – Clarence HIll Jr., Fort Worth Star-Telegram

While all the attention is on the DeMarcus Lawrence contract situation, what’s going on with the other guys?

Per a source, the Cowboys haven’t even started negotiations with Prescott or Cooper. With both under contracts and with their respective agents dealing with other clients in free agency, there was no rush to get to the bargaining table. The source said the deals for Prescott and Cooper may not come until after the upcoming 2019 NFL Draft and possibly as late at OTAs in May.

Stephen Jones spoke out about it.

The Cowboys found another bargain and upgraded their roster. Here’s what Robert Quinn adds – Calvin Watkins, The Athletic

What does the Cowboys new pass rusher bring to this defense?

Last season, Quinn recorded 6.5 sacks with 15 quarterback hits and nine tackles for loss. He did this while undergoing back problems. Outside of not paying him his entire $11.8 million salary, the Cowboys voiced concerns about his back. Quinn visited The Star last week where team doctors were able to exam him and clear him to play. The team doctors told the Cowboys front office that Quinn’s back is healthy enough, but they have some long-term concerns. When healthy, Quinn is a very good player and should provide the Cowboys with a strong pass rush off the edge if they can work a deal with Lawrence.

The former scout over at the Mothership provides a scouting report of the team’s new defensive end.

As you’d expect from a first-round talent, Quinn plays with initial quickness off the snap. Even at this advanced point in his career, he still has a good first step. Plays low to the ground. To account for him, opponents will often put extra blockers to his side. He will get chipped by backs and tight ends. He has the ability to take his blocker wide, then work underneath. He shows important redirection skills, and he has a large tool belt of pass rush moves. Start-stop quickness. Slippery player. You hear me talk about this a lot, and it definitely applies to Quinn: he gets in a rhythm as a pass rusher. This is one of those guys that smells blood in the water.

While Quinn gives the team some short term relief on the defensive line, the team could look to the draft to find the long-term answer.

The most important attribute for any defensive lineman is pass rush value, and Allen is undoubtedly one of the most technically-refined rushers in this draft class. You can see on this clip how he already has advanced hand usage with this chop-rip, as well as the flexibility in his lower-half to bend around the edge and flatten to the quarterback.

What makes Allen so valuable is his position flexibility to play in any front or scheme as an inside-out, hybrid defensive lineman. You can see here he is lined up as a five technique, setting up the right guard for an inside move. Allen has a blueprint for every pass rush rep he takes.

The Cowboys have shown their not afraid to take risks, especially when it comes to grabbing an edge rusher with upside.

We already mentioned the risk that Khalil Mack carried into the draft as a small-school prospect. The same risk surrounds Louisiana Tech edge-rusher Jaylon Ferguson. Ferguson is going to intrigue teams because of his high level of production. He set a new NCAA all-time sack record with 45 career sacks. He also looks the part of a future NFL star at 6’5” and 271 pounds. He’s trending as a Day 1 or Day 2 pick—NFL Media’s Bucky Brooks has him going 21st overall in his latest mock draft.

However, the question does remain of whether Ferguson can make the jump from FBS play to the NFL like Mack did. Based on his average pro-day numbers, Ferguson might struggle. According to NFL Media’s Gil Brandt, Ferguson ran the 40 in 4.82 seconds and had a three-cone time of 8.08 seconds. Those aren’t great numbers, even for a 271-pounder. Someone is going to take a chance on Ferguson, though, hoping he can be the next Mack. Ferguson is one of the Cowboys official pre-draft visits.

The plan is for Witten to play around 25 snaps a game. Head coach Jason Garrett explained how things might play out this upcoming season.

“His greatest strength is his competitiveness, his desire, his drive to be a great football player and have a positive impact on our team. He’ll go to all ends of the Earth to be able to do that. That’s why he’s a Hall of Fame player. You never want to take that away from him. Having said that, we have a couple of young tight ends who emerged last year and started playing better and better as the year went on. We feel like those guys will have a role for us. All of that stuff will be fleshed out as we get going, but suffice it to say we’re really excited he’s back. We’re excited about the development of those young guys and how that tight end group is going to be.”

The legendary tight end was only out of the office for a year, but he is glad to be back.

“I’m loving it,” Witten said before he was inducted into the Texas Sports Hall of Fame here on Saturday. “I’m invigorated by the process of going back in there. I really feel like obviously I’ve got a lot of energy coming back in there. I’m excited, and I think you just get back in there. That’s what I’ve enjoyed the most, getting with the guys, start looking at some tape and working out with Coach [Mike] Woicik and the strength staff some. There’s been nothing like it. I feel like a little kid when my car pulls in. I’m looking forward to the next six, seven months.”

Of course, all people were talking about on social media was his hair…or lack thereof.

Terms of the Cowboys getting Witten from ESPN now evident:

Jason Witten has a new look, it seems.

So thrilled to be with my sports hero — @NancyLieberman — and Cowboys legends @JasonWitten @Boys_Vox at Texas Sports Hall of Fame induction. Watched @NancyLieberman play for the Dallas Diamonds at Moody Coliseum!! Nancy, Jason and Brad are the all-time best at what they do! pic.twitter.com/WKWyvtQ1NJ