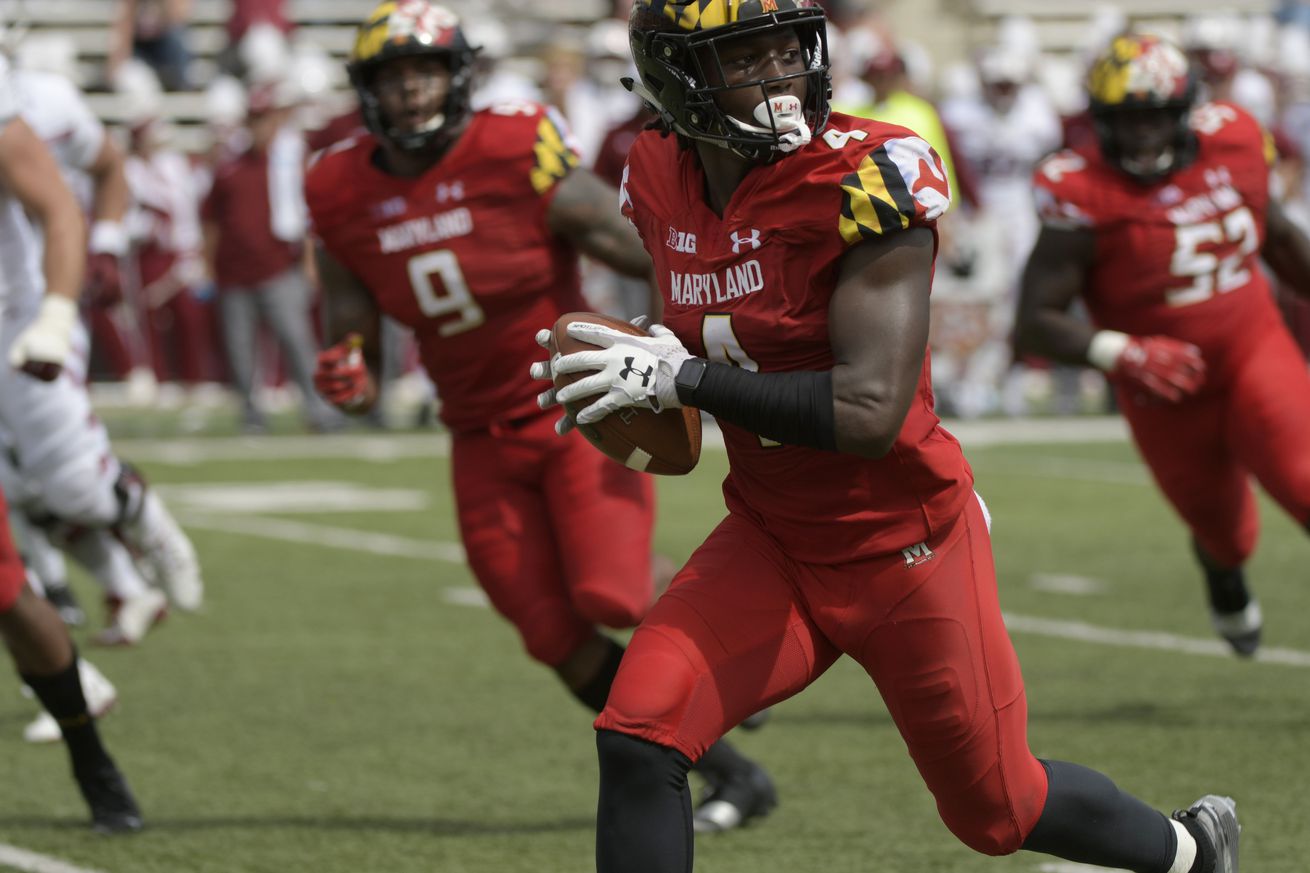 What draft prospects have been rising up draft boards lately? The Cowboys have met with one.

After a relatively quiet 2018, the safety market exploded in free agency this offseason. While it wasn’t surprising to see elite safeties get top-end money (Earl Thomas, Landon Collins, etc.), it was shocking that mid-level guys got paid as well.

For teams that missed out on the safety market in free agency, the 2019 draft class has a lot of talent at the position. One player whose stock has risen significantly this offseason is Maryland’s Darnell Savage.

Savage stole the show at the NFL combine, running a 4.36 40-yard dash and posting a 39.5-inch vertical. In an NFL that is all about versatility and coverage ability, Savage is a perfect fit. He’s a former cornerback who can play either safety position as well as cover in the slot. He is a reliable tackler who shows the range to be a free safety in the NFL but also the physicality to play in the box if needed.

Savage could put together a career like Tyrann Mathieu or Lamarcus Joyner. No safety has dominated the predraft process more this year.

Cowboys Draft Digest, Volume 8: Believe it or not, the Cowboys need DBs. We look at five more – Bob Sturm, The Athletic DFW

Savage is one name, but the Cowboys could be looking at other defensive backs, too.

Hooker is another in a line of defensive backs from Iowa who have been under consideration this draft season. Since so many of these Hawkeyes end up being excellent pros, we have learned not to worry about the overall health of the offensive game in the Big 10 west. Hooker was not only First-Team All-Big 10 but also Second-Team All-American in his final season, where he went from off the charts last summer to prominently in the mix at the safety position.

Overall: I realize I am violating my own rule about spending too much time thinking about Micah Hyde and Desmond King when looking at Amani Hooker. Stereotyping players from the same school is a major violation in my book, but there are some similarities in this case. That is why I look at both of those players going in the fifth round as unbelievable value for those teams. Hooker is way too good and too versatile for that and I am going with a SECOND-THIRD ROUND grade for him.

Speaking of draft prospects that could see their stock rise, Darwin Thompson is a player that could be on the Cowboys’ radar.

Darwin Thompson is also a very elusive player in space. Although not a blazer, he’s an evasive runner who can make people miss with the ball in his hands. Once he’s in the open field Thompson is a fun player to watch, but getting him to that point was sometimes a struggle for Utah State.

In a lot of ways, Thompson is the antithesis of Ezekiel Elliott. But that could be exactly what the Cowboys need in their running back room. In recent years they’ve backed Elliott up with Rod Smith and drafted Bo Scarbrough, two big and powerful running backs who didn’t see much time at all on game-day. It might be time for them to fill that spot with a different type of running back.

He’s still a very raw football player, but it is obvious that there is talent there with Darwin Thompson. I like Thompson on day three of the NFL Draft if the Cowboys decide to take a chance on a guy with some scat-back qualities who needs some coaching and developing as a football player.

Would Dallas consider adding a Texan to its roster through the draft?

Jaylon Smith, Sean Lee and Leighton Vander Esch make up one of the best linebacker corps in the league. Keeping Smith clean should take center stage for the Jones family. This would give Marinelli the ability to maximize Smith’s talents.

Right now, the interior defensive line of the Cowboys isn’t ideally desirable. A sturdy powerful tackle who can push the pocket, but more importantly keep Smith clean, would be an ideal fit moving forward. Texas A&M’s Daylon Mack is the perfect prospect for the Cowboys in that regard.

Mack isn’t the greatest athlete, but he doesn’t need to be. What he does best comes in the power game. He’s an anchor against the run as an interior lineman because of his strength. And that’s exactly what the Dallas Cowboys need up front. The 6-0, 336-pound tackle is a compactly built, massive man. He’ll take on double teams and allow the 3-tech to do his job.

What is Taco’s future in Dallas?

What Quinn provides is an experienced right defensive end that gives the team insurance in case Gregory is unable to return. But the fact is, Dallas bought their insurance back when they selected Michigan defensive end Taco Charlton 28th overall in the first round of the 2017 NFL Draft.

If Charlton was playing up to his draft status, the Cowboys wouldn’t need a player like Quinn. Entering his third season, Taco should be the starter by now. Unfortunately, the 24-year old is quickly approaching full draft bust status instead.

After a slow start his rookie season, where he posted 19 tackles and 3.0 sacks, Charlton appeared to be preparing to take the next step in his expected development last year. After posting a promising training camp performance, Taco all but disappeared during the regular season. And a shoulder injury robbed the young pass rusher of any chance for redemption.

In case you missed it, Minich breaks down what Randall Cobb can do for the Cowboys offense.

This episode of Film Room takes us back to Week 1 of the 2018 season, when Cobb was still with Green Bay. Quarterback Aaron Rodgers targets Cobb on a key third down late in the game. Cobb makes a great catch to move the chains, but he is not done there. He uses not only his speed, but his vision as a runner to set up blocks and avoid would-be tackles taking the ball 75 yards for the go ahead score.

Jason Witten ‘Invigorated’ by Return to Cowboys After Coming out of Retirement – Timothy Rapp, Bleacher Report

Gold Jacket Witt is excited to return to the football field.

The 36-year-old Witten is a Cowboys legend, recording 1,152 receptions for 12,448 yards and 68 touchdowns in his 15-year career. But while he enjoyed his time in the booth, allowing him to see “the league from a different point of view,” being away from the Cowboys as they’ve continued to improve was too difficult.

”I saw the Cowboys team start to come together and a lot of stars and young stars that love the game, and when [team owner] Jerry [Jones] presented me that opportunity to come back, I was just extremely excited,” he said. “I think more than anything else, it was just something that was tugging on me inside to say that maybe there’s something still inside left to go out there and go after that championship.”

Even opposing college teams can agree that everyone hates the Dallas Cowboys – Troy Machir, NBC Washington

They hate us ‘cause they ain’t us.

But one of those few things easier than disliking Duke is hating the Dallas Cowboys. And on Sunday in the East Regional Final between No. 1 Duke and No. 2 Michigan State and Capital One Arena, every fan in attendance agreed with that sentiment.

Midway through the second half of play, with the teams on the sideline for a TV timeout, Cowboys quarterback Dak Prescott and wide receiver Amari Cooper were both shown on the Jumbotron.

The fans in attendance, a mix of Duke, Michigan State and local supporters reacted with a chorus of boos.

Here is an awesome update on Cowboys legend Michael Irvin!

Michael Irvin announced in an Instagram post Sunday that the testing he underwent for throat cancer came back 100 percent clean.

The Dallas Cowboys legend had written in an Instagram post last week that he had spent two days in a Los Angeles hospital undergoing the tests.

On Sunday, he expressed gratitude for the outpouring “of love, support and prayers” he has received since his post last week.

Thank you God for continuing to answer Prayers and Thank you ALL for Praying. I spoke with Dr St John at UCLA Medical and she has informed me that all test have come back 100!% clean. NO CANCER!!!!!! It is impossible to express my family and my appreciation for the overwhelming out pour of love, support and prayers. I was on my threshing floor dealing with the stronghold of fear. You all covered and encourage me. To God be the Glory

The Triplets hung out with a friend on Sunday.

The Triplets & The Champ