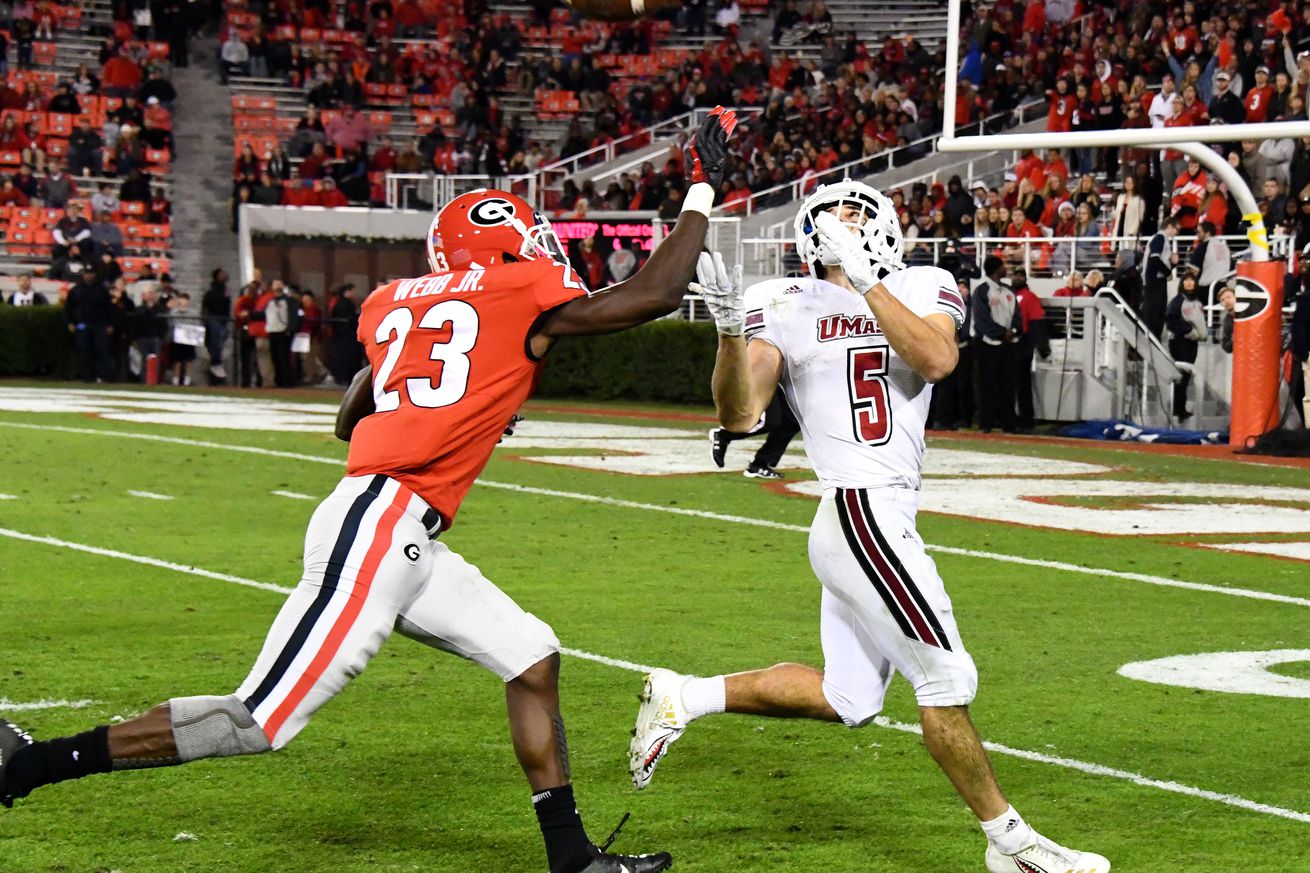 Production, athletic ability, and route running are three of the top things NFL teams look at when evaluating wide receivers in the NFL draft. Andy Isabella is a guy that has all three of those things entering this years draft class. In four years at UMass, Isabella put up extremely impressive numbers finishing his career with the Minutemen catching 231 footballs, for 3,526 yards, and 30 touchdowns. Isabella also added 40 carries, 342 rushing yards, and two rushing touchdowns to his stat-line. Along with his impressive production at UMass, he showcased his impressive athletic ability at the NFL combine in Indianapolis back in February, running a 4.31 40-yard dash, 121.0” broad jump, and 6.95 three-cone drill. Isabella’s athletic ability translates to his tape and route running ability where he was able to stretch the field vertically with his speed, have success in his route running due to his short area quickness, and the ability to win off the line of scrimmage with lower body explosion/flexibility. Isabella, despite being undersized, was able to win down the field a ton at UMass, averaging 15.3 yards per reception in his four years at school. Isabella showed good hip flexion which allowed him to sink out of breaks when working back to the football and the sideline. Footwork is extremely clean and crisp when stacking defensive backs at the line of scrimmage and working in-and-out of breaks. Strong after the catch with the football in his hands due to his speed and small hit target. Could line up both in the slot, and outside for the Cowboys, not just a one trick pony. Return skills on special teams are one of the ways Isabella can make an instant impact in the NFL.

Extreme body-catcher. Rarely showed the ability to receive the ball with natural soft hands, likely due to small hands (8 3/8”). Allows the ball to get into his frame, which will result in more time for defensive backs to make plays on the ball in the NFL. Limited catch radius for his size. Struggled to extend and catch the football away from his frame. While Isabella is extremely quick, it can often take him a second to get going when firing off the line of scrimmage. Even though the combine numbers were eye-popping, the tape shows a more quick than fast receiver. Did not go up against consistent top competition at Massachusetts. Struggled at times against more physical press corners. Had his fair share of struggles at the Senior Bowl with drops and consistent separation.

Massachusetts wide receiver Andy Isabella would be an excellent addition to the Cowboys. Isabella is a very crisp route-runner with extremely quick feet, a developed route tree, and exceptional athletic ability. Isabella was one of college football’s most productive receivers in 2017 and 2018, which resulted in NFL teams really getting familiar with the 5’9” wideout. Isabella has the versatility contrary to his size, to play both inside and outside, as well as make plays in the shallow and deeper third of the field. Andy Isabella can make an instant impact in the NFL due to his special teams ability, route-running ability, and speed in all three levels of the field.