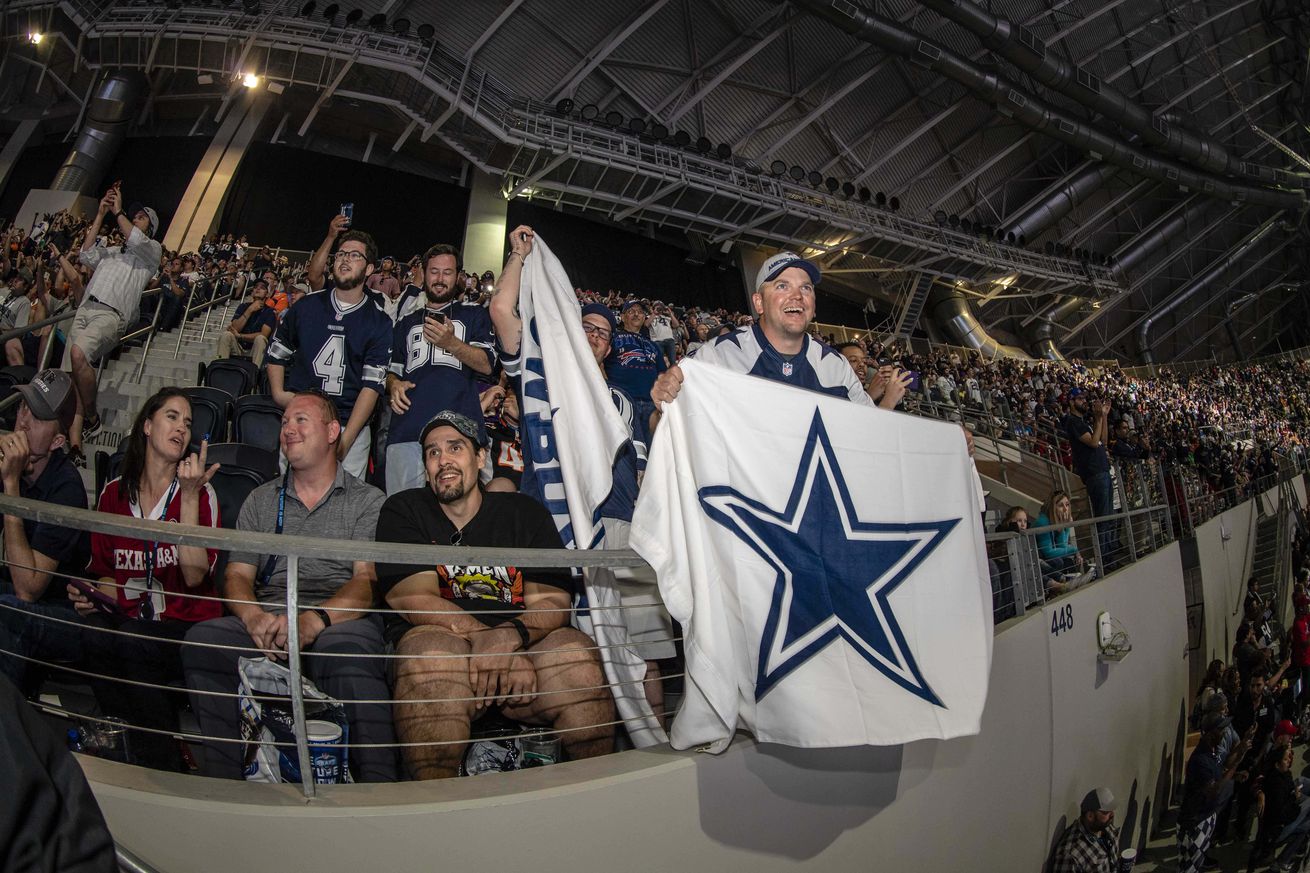 Focus is shifting to the draft.

Dallas Cowboys: Six safeties among top 30 pre-draft visits | Clarence Hill, Jr, Fort Worth Star-Telegram
The 30 visitor list for the Cowboys is usually a great predictor of one or two names that will be called during the draft. And this is not much of a surprise.

It appears the safety position remains a high priority for the Cowboys based on the national top 30 pre-draft visitors the team is hosting at the Star in Frisco this week.

As the editor-in-chief of the College Football America Yearbook, I find myself on the sidelines of major college football games practically every weekend. So I get to see players that could be helpful to the Dallas Cowboys up close. As Cowboys247 approaches the NFL Draft, I’m going to put that work to good use and try and profile some of these players. Today I take a look at a player that could be available late in April’s draft, Michigan State safety Khari Willis.

The day I saw Willis the Michigan State Spartans played the Utah State Aggies in a season opener. I didn’t know much about Willis going into that game. But I found out quickly how solid a player he was.

By the end of the evening Willis had seven tackles, three pass-breakups and an interception.

Dawson Knox caught 39 college passes. But his massive upside may be enough for Cowboys to buy in – Kevin Turner, The Athletic
Tight end is another position the Cowboys may be looking to upgrade. Here is a look at one name on the pre-draft visits list.

There are many directions we can go with this information, but one player quite a few readers asked about early in the draft process was Ole Miss tight end Dawson Knox. Now that I can confirm the Cowboys’ relative interest, let’s dive in.

First things first, ignore his stat line. Knox had 39 receptions in two full seasons at Ole Miss. He made 24 catches his sophomore year and just 15 last season. He also didn’t have a single career college touchdown. I think you’ll soon find that, against all odds, it’s not his fault. Despite an incredible stockpile of talent — D.K. Metcalf, A.J. Brown, DaMarkus Lodge and Knox — the Ole Miss offense ran a very predictable scheme and didn’t run creative route concepts. The quarterback was nothing to write home about either. These circumstances led to Knox being one of the more severely underutilized specimens in college football.

South Carolina wide receiver Deebo Samuel — like Washington safety Taylor Rapp — is a prospect the Cowboys would be lucky to be able to pick when they go on the clock at No. 58.

Measuring in at 5-11, 214 pounds with 31 3/8-inch arms and 10-inch hands, Samuel is built more akin to a running back. Don’t get it twisted, though: His skill set is dripping with notable receiver traits.

Despite his compact size, Samuel is an impressive athlete, testing in the 76.3 percentile among receivers at the NFL scouting combine, according to Three Sigma Athlete. His 4.48-second 40-yard dash time and 39-inch vertical are his most notable test results because they indicate that, despite his height and density, he can have success vertically down the field and in the air.

Samuel displays one of the most well-rounded skill sets in the entire receiver class. Not only has he proven capable of running the full route tree, but he demonstrates the ability to win inside as a slot receiver or outside as a more traditional X or Z receiver.

Dallas Cowboys 2019 Offseason: Winners & Losers So Far ✭ Jess Haynie, Inside the Star
Free agency moves don’t just flesh out the roster. They have implications for players already on the roster. Here are two winners and two losers, including this one in the former category.

If the Cowboys had signed veteran Earl Thomas then it could have meant a backup role for Woods. Both play the free safety position, and Xavier is a little undersized for the strong safety role. Jeff Heath may have kept his spot and put Woods on the bench.

But instead of a flashy signing Dallas went with a bargain option in George Iloka. Not only does Iloka project more as a strong safety, but his minimal one-year contract means he isn’t even guaranteed a starting role.

That said, Iloka is still just 29 and has 79 career starts. He is not just here for simple depth. At worst, he will likely be part of a rotation with Woods and Heath.

Ranking the Dallas Cowboys Offseason Acquisitions ✭ John Williams, Inside the Star
This list has Robert Quinn as the number one move by Dallas, which is no surprise. But the second spot is a bit of one, coming in ahead of Randall Cobb.

They say that you can never have too many pass rushers, and while many would point to Randall Cobb as the next most important signing to Robert Quinn, I’d argue that it’s Defensive Lineman Kerry Hyder.

YOU CAN NEVER HAVE TOO MANY PASS RUSHERS!!!

Hyder comes over from the Detroit Lions where he spent 2018 playing nose tackle for Matt Patricia’s 3-4 defense. At 270 pounds.

I don’t know what Hyder did to Matt Patricia for the Lions head coach to play him that out of position, but Hyder was incredibly undersized to play the 0-tech defensive tackle position.

Brett Maher is on Cowboys bubble, team has options for future – Patrik “No C” Walker, 247 Sports
One position that could well see a real camp competition this year is placekicker. We had one last year, although most didn’t even realize it, as Brett Maher took Dan Bailey’s job. But he didn’t exactly lock it down during the season.

On the whole, Maher was solid in his first NFL campaign, but there’s much room for improvement.

He finished his first season with the Cowboys having registered an accuracy rate of 80.6% on FG attempts, and that’s a good number until you apply the proper perspective, in that it slots Maher as the 25th-best kicker in the NFL. That number buoys when you filter out anyone with fewer than 30 attempts, but he still ranks second-to-last in that group, ahead of only Cody Parkey — who finished with a 76.7% accuracy rate and is currently unemployed after costing the Chicago Bears a playoff win against the Eagles. Thankfully for Maher, his foot wasn’t the reason the Cowboys were eventually knocked out of the playoffs in the NFC Divisional Round, but he did miss a 58-yarder that would’ve kept the 24-22 contest from being a nail-biter in the waning minutes.

Star Evaluation: Does Zeke Need Backfield Help? – Nick Eatman, DallasCowboys.com
While the Cowboys have done a pretty great job addressing their biggest needs in free agency, one position that has been left out (so far) is running back. With Ezekiel Elliott, they obviously have their starter – but how big a workload do they want to put on him?

What’s Been Bad: It’s not so much about what has been bad, but what could be bad down the road. The amount of touches Zeke got last year – 381 – led all NFL players and was the seventh-highest total in franchise history and the most since DeMarco Murray had 449 touches in 2014. Again, the production is there but the fear of Zeke having too much of the workload is certainly a factor. It’ll probably be addressed in the draft as the Cowboys should make a focus on taking a backup tailback.

Roger Staubach On Dak’s Greatest Asset – David Helman, DallasCowboys.com
So this seems like a good thing.

Not that anyone needs to be reminded by now, but Prescott was the eighth quarterback taken in the 2016 NFL Draft. But whatever physical limitations might have pushed him into the fourth round, his leadership and charisma are well-documented and go all the way back to his days as a high school star.

To hear it from one of the Cowboys’ best-ever leaders, Roger Staubach, that can go a long way.

NFL Reviewing Randy Gregory’s Contract Extension | 105.3 The Fan staff
Looks like this is on hold for a bit.

The NFL is looking into the contract extension the Cowboys agreed to with suspended defensive end Randy Gregory, Bryan Broaddus said on 105.3 The Fan Tuesday afternoon.

“We need to kind of back up on this one, guys, because the league has not approved this contract. They’re still looking through some details about it as of today,” Broaddus said on the Ben and Skin Show. “We’ve been told the league is still looking at the contract so nothing official has been said about it or from the Cowboys perspective of it. That’s kind of where we’re at right now … just waiting on the league’s approval.”