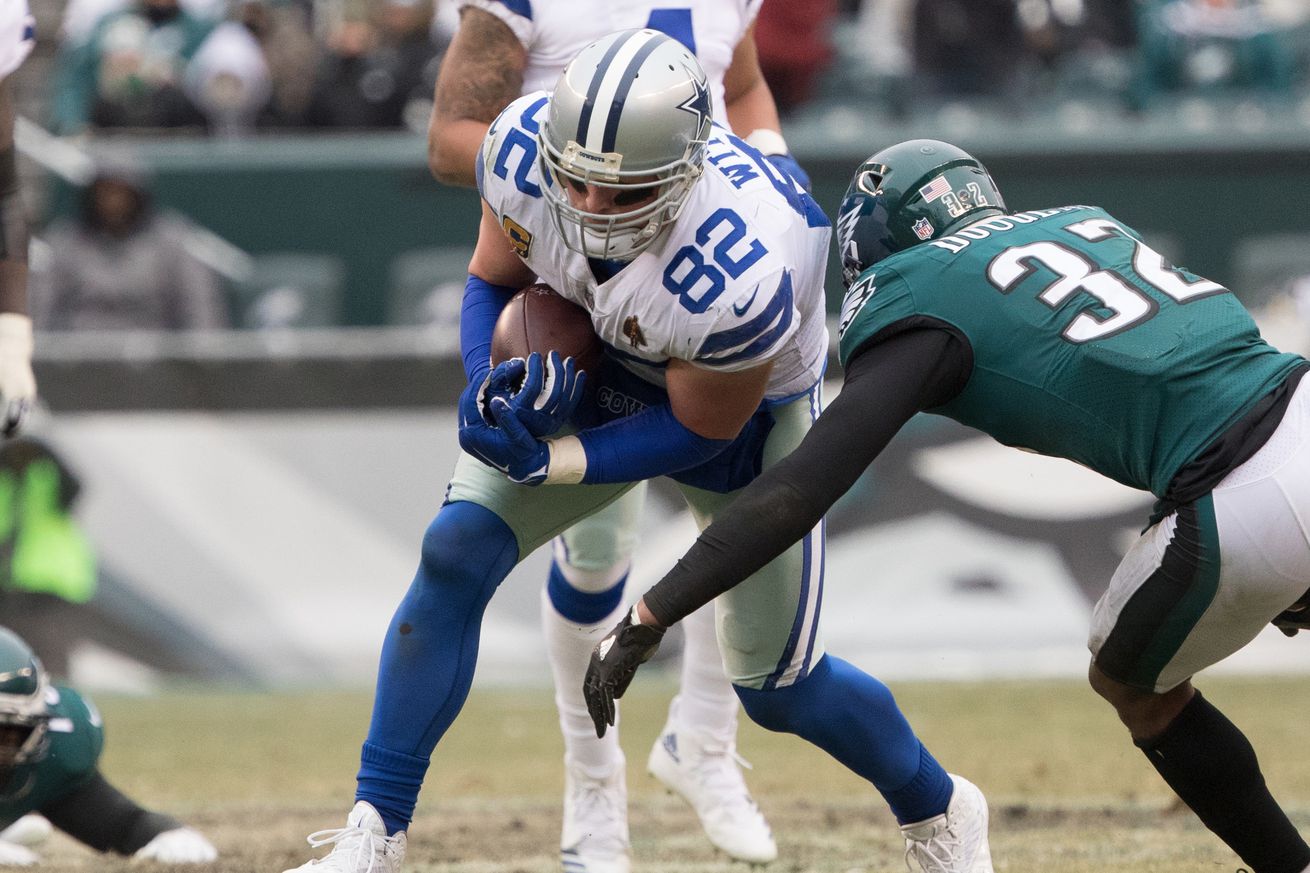 A recent comment from a Dallas staffer may point to the un-retired tight end still being the go-to guy.

One significant addition for the Dallas Cowboys this offseason was the surprise return of Jason Witten after a not-so-successful year in the Monday Night Football broadcast booth. While he is of course a wee bit past his prime at age 36, he brings incredible savvy and leadership back to the roster. At the time of his signing, much was made of his agreement to accept a lesser role, with 25 snaps tossed out as a projected workload to allow the younger, rising tight ends, Blake Jarwin and Dalton Schultz, to get their time on the field.

Well, that may not be exactly how it will work out, based on this tweet from a few days ago.

Was talking to someone in the Cowboys org who explained to me that Jason Witten – right now, fresh from the booth – will likely be the best run blocking TE on the roster – BY FAR. Other young, promising guys improving for sure. But 82’s return should help instantly in that regard

For a team that continues to show a real dedication to featuring the running of Ezekiel Elliott in the offense, that comment certainly opens the door for Witten being on the field a lot more than spot duty.

That raises the question: Is that really the best thing in a league where the passing game, by a wide variety of metrics and analyses, is the real path to success?

Much of the hope for this season is pinned on the Cowboys having a less predictable offense. Both the fans and the team’s own staff grew fatigued by the repeated instances of opponents stacking the box in response to the personnel and formations that were on the field last year. It led to the departure of Scott Linehan and the promotion of the very inexperienced Kellen Moore to replace him as offensive coordinator. If Witten is once again going to be the man they want on the field for running plays, it could well create some of the same unfavorable situations for running the ball. In turn, we could see the same situations where unsuccessful runs puts the team in a hole and things stall out too often.

Moore already faces an uphill battle. Young offensive coordinators often have to survive a learning curve. They seldom if ever come out of the gate able to meet the challenges of NFL defenses with great success. Now Moore may be saddled with a player who in the past simply refused to come off the field. Witten is a true team player, but he also has that competitive fire that makes him believe he helps the team more by being on the field. It is hard to see Moore being able to tell him to stay on the sidelines, even with Jason Garrett’s backing.

Moore may find himself having to find a way to make his scheme work with Witten an integral part of the offense in much the way he was for his entire career before his brief foray into the booth.

The answer would seem to be for Moore to just call as many pass plays with Witten in the game as runs, especially on first down. He has to establish that unpredictability for the defense so they cannot use Witten as a key to stack the box. It also is going to take some help from Dak Prescott, who may have to make some reads and audibles to take advantage of those kinds of defensive alignments and throw the ball. One good thing is that Witten should still be a reliable target. But he had little to offer in the way of yards after the catch in his last few seasons. Opposing defenses may try to induce Prescott to settle for Witten as his only available target, with the logical assumption that he is less of a threat to break one than Amari Cooper, Michael Gallup, or presumptive new slot receiver Randall Cobb.

That is where Moore will have to be more aggressive with his play designs and calls. He will have to get Witten out past or at least near the sticks, or scheme him open enough to have some room to get yards without having a defender right on top of him. Elusiveness is something that he has likely lost at this stage of his career.

Once Witten became open to the idea of returning to play, the team could not really pass on bringing him back to the field. He already has two seasons working with Prescott, and that familiarity has its own value. But he cannot be used the same way Linehan did.

All personnel acquisitions come with the question of whether the player adds or subtracts from the team. Witten’s balance sheet has both pluses and minuses in that regard. Jarwin and Schultz are both much more athletic, and the former showed us a glimpse of what he might be capable of in last season’s finale, when he exploded for 119 yards and three touchdowns, averaging an impressive 17 yards per catch. If that is a true indication of what he is capable of, then the team is going to have to find a way to not let Witten limit the younger player’s contributions.

It may be a delicate balancing act, and that is one thing that Moore may struggle with a bit. He is going to need Garrett to have his back if some friction develops with Witten. We can hope that the veteran’s professionalism and dedication preclude that. But it may be something we have to watch closely. Witten’s blocking can be a real asset. It just can’t be a factor in limiting the passing game if Dallas hopes to have a successful year.