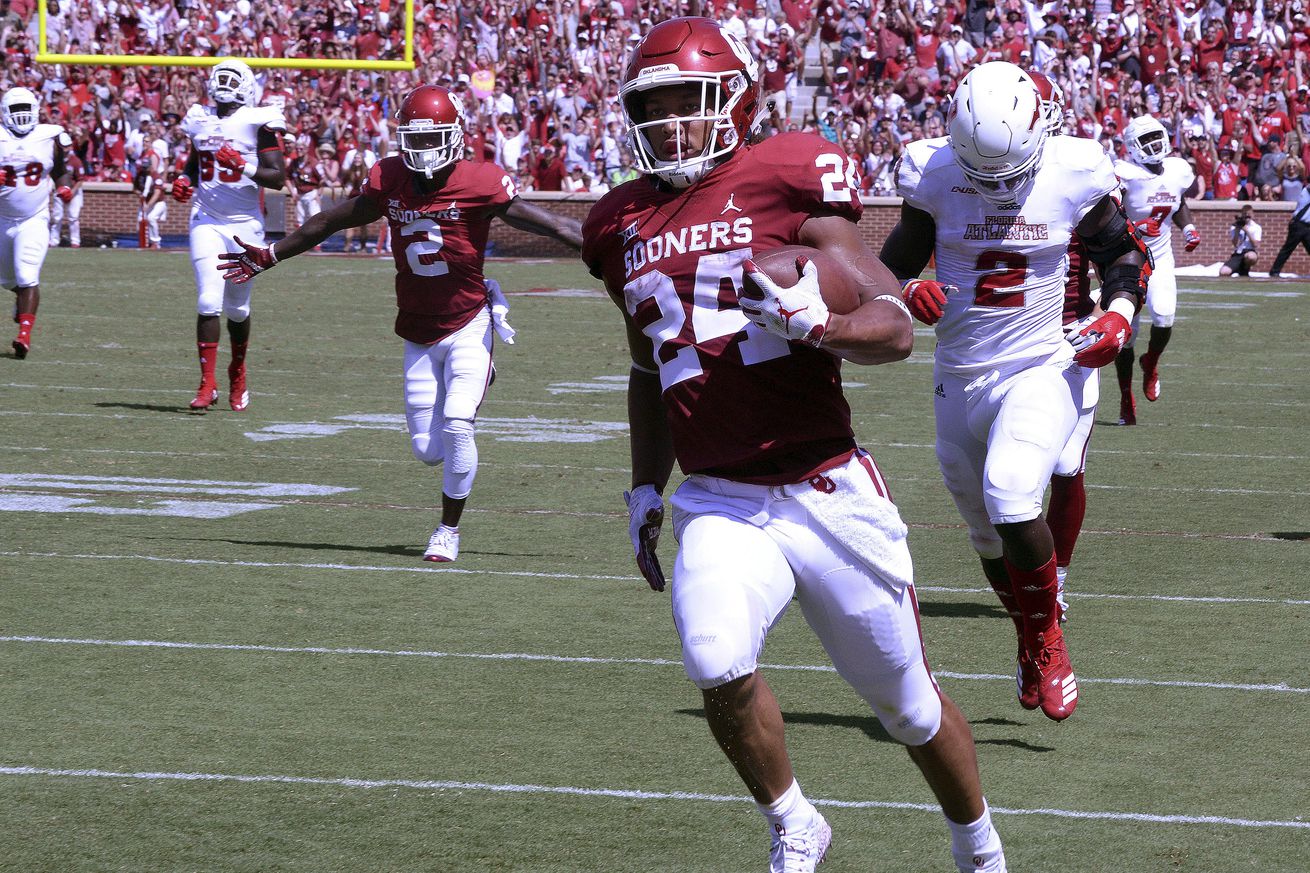 The Sooner star could pair well with Ezekiel Elliott.

The Cowboys have made really solid moves thus far in free agency to fill many of the holes they had on their roster. But one area that Dallas has shown little to no interest in so far is running back. It seems as if they’re moving on from Rod Smith as the primary backup running back, and they’re likely to target one in the draft to serve as Ezekiel Elliott’s relief.

One potential option for the Cowboys is Rodney Anderson of the Oklahoma Sooners. Anderson is from Katy, Texas but chose the Sooners over any of the in-state options as a four-star prospect. Unfortunately, Anderson struggled at times because of injuries to show off what made him such a highly sought after prospect. Anderson played only two games as a true freshman before breaking his leg. The next year, he suffered a neck injury that caused him to miss the entire season. And while he played all 13 games in the 2017 season, he tore his ACL two games into the 2018 season.

All of these injuries are very significant and concerning, and it’s why Anderson might be available in the fourth or possibly even the fifth round. The saddest part is that when Anderson has been playing, he looks great. His 17 career games and 200 career rushing attempts offer a small sample size, but based solely on that, Anderson looks the part of what would be a top-tier running back in this draft class.

When looking at the limited tape of Anderson, he has some similar traits to Ezekiel Elliott, actually. He has a perfect blend of explosiveness, instinct, and strength to where he’s able to make the cut and burst up field, but still be able to run into the line of scrimmage and grind out the dirty runs.

In 2017, Anderson benefited greatly from Baker Mayfield’s presence, as he didn’t see too many defenses stack the box to try and stop him like Zeke does. That made Anderson’s job a bit easier, but it shouldn’t take away from the great work he did. Anderson also got experience running in several different concepts and with different blocking schemes, giving him some versatility.

Where Anderson shined the most, though, was when he was asked to show off his patience and wait for blockers to open up holes. He has good vision in looking for the right hole and then being decisive in hitting it, at which point his natural ability takes over. This skill would translate well to the Cowboys offense, which primarily relies on patience behind their zone blocking scheme.

Anderson also has a lot of potential as a receiver out of the backfield, both as a checkdown option and going out to run routes further down field. He acts like a receiver in the way he runs his routes and tracks the ball, and Oklahoma often tried to utilize that.

The one area of Anderson’s game that doesn’t really shine is in pass protection. Anderson isn’t terrible to the point where he’s a Chaz Green-esque liability, but he isn’t reliable either. One of the things that makes Elliott so valuable is that he’s a skilled and willing blocker. Anderson is only sometimes willing and not very skilled. He has the frame to improve in that aspect, but needs more work on the techniques of pass protection. As a backup or change of pace back, though, he’d rarely be asked to block.

Watching Anderson on tape, especially from 2017, he looks like a first-round prospect. The issue is that he’s only played one full season. Concerns over durability and the small sample size of his tape is keeping Anderson relegated to the third day of the draft, along with the overall devaluation of the position. His health is undoubtedly a question, as he only participated in the bench press at the combine and sat out at his pro day.

But if Anderson can stay healthy in a reserve role, primarily serving to give Elliott a breather, then his skill-set would potentially add a whole new dimension to the offense. If the Cowboys team doctors like what they see from Anderson and he’s available when Dallas picks in the fourth round, he might be worth the chance.